The Use of Satire, Imagery, Irony, and Symbolism in Rip Van Winkle, a Short Story by Washington Irving

At its most basic level Rip Van Winkle is a humorous story of a man who sets off into the mountains to find so much needed peace and quiet, then sleeps for twenty years. Washington Irving uses a combination of satire, imagery, and irony, intertwined with symbolism, to paint an allegorical image of the American Revolution. Irving particularly focuses the tale of Rip on America’s political struggle during the latter half of the eighteenth century while highlighting the role of England as a colonializing society.

Don't use plagiarized sources. Get your custom essay on
“ The Use of Satire, Imagery, Irony, and Symbolism in Rip Van Winkle, a Short Story by Washington Irving ”
Get custom paper
NEW! smart matching with writer

The use of symbolism helps in creating a vivid mental picture and a physical sensation of the subject without directly referring to the details of the revolution itself. Understanding the symbolism helps in deriving the full meaning of Irving’s writing and the themes it addresses. Ultimately, an analysis of the symbolism will help in understanding the American struggle against England, and how the American Revolution shaped the future of America. The American Revolution represented a period of rapid change in America.

While America had long been a colony of England, the Revolution represented a fight for independence, an insurgency in political mindedness, and a call for change in terms of the way society operated. The primary colonial government represented the crown while the growing body of Americans wanted a government that actively represented the people and the interest of Americans over the interest of the English mainland. As a result, Americans valiantly rose up and bore arms to defend their right to self-govern. In spite of the yearning for independence, the citizenry as a whole struggled to create a uniquely American identity when they were no longer a colony.

Irving’s story “dramatically bifurcates into a public celebration of the Revolution and covert critique, by which Irving both registers his own ambivalence towards a revolution he simultaneously admires”. In other terms, Irving wrote Rip Van Winkle as a reflection of the struggle to create a new American identity which was separate from England’s politics and culture.

More specifically, Rip Van Winkle wakes after a twenty-year nap into a post-revolutionary America when a new cultural identity had been established which allows Irving to draw a stark contrast between cultures before and after the American Revolution. Rip and his nap are used to create space for a bifurcated exploration of post-revolutionary America. Rip’s character is anchored within the text in spite of the changes in the world around him. Because he goes to sleep before the revolution and wakes after the revolution, he is unchanged by the event itself. This constant allows him to act as the “narrative anchor” for the text’s creation of a new, truly American “cultural identity”. Because he is passive in the revolution by sleeping in the mountains rather than taking part in the battle, he becomes the perfect narrator by being an observer rather than a participant. This role allows him to be free of bias in presenting a case regarding the revolution, other characters’ roles, and the reestablishment of the American identity after the revolution. His role as an impartial character is further demonstrated within the text by his description of being so neutral that dogs do not notice him.

Rip’s character is neutral, but his experiences before and after the revolution are not necessarily neutral. Rip Van Winkle is described as a helpful, a “kind neighbor, and an obedient henpecked husband”. This is significant because it establishes that he is an American citizen controlled and often treated severely by his sovereign wife. In keep with the understanding of the text, Dame Van Winkle is used to represent England. The use of Dame Van Winkle as a symbolic representative of England is most obviously demonstrated by the fact that she is the only character in the text who has a name that is aligned with the British court-based social structure. She is referred to as “Dame” which is the title for a woman who has been knighted in service to the crown (“Dame” 314).

Further, the choice to allow a woman to represent the English is also of symbolic significance as England was considered to be America’s “mother country,” or the country which formally commands a colony (“Mother Country” 809). Of little surprise is Irving’s decision to make clear that Dame Van Winkle is in charge, or the one issuing authority within the Van Winkle household. The reader is told that Dame Van Winkle’s tongue “was incessantly going about; everything Rip said or did was sure to produce a torrent of household eloquence” . What is significant, in this case, is not what she said, as it is never specified, but rather the quantity and the force with which she spoke. She is bossy, demanding, and constantly issuing decrees. This is reflective of the American view of England at the time that revolutionary sentiments began to fester. England was constantly demanding something from America, including new and rising taxes without representation, military services, and other resources without offering anything such as protection or material support.

Just as England drove America away, Rip eventually seeks peace to avoid Dame Van Winkle. According to Downes, Dame Van Winkle’s overbearingness leads to her ruin because of her “excess results In comes self-destruction”. The Dame saw her demise when she “broke a blood vessel in a fit of passion at a New England peddler,” which symbolizes that America killed her. Just as England pestered America until it sought independence and generated a war that spilled English blood, so did Dame Van Winkle by using her tongues as a weapon to bully the peddler until it resulted in her own destruction.

The symbolic use of Dame Van Winkle as England is significant because of the role of women in society during the revolutionary period. “Women set the tone of those institutions that restrain masculine excess”. Dame Van Winkle set the tone for control of Rip which, with her penchant for using language as a weapon, that ultimately leads him to mutiny and abandonment. Similarly, her conflict with Nicholas Vedder is likened to a “revolutionary antagonism”). The men in the story become representative of the revolution in direct response to the harsh control placed on them by feminine institutions that seek to limit them from acting in aggressively masculine ways. According to this idea, men run off to assert their masculinity and implies that war is a function of masculinity while governing and peacekeeping is a function of femininity.

America is, therefore, represented in alignment with the male person through Rip because of the desire for independence, or excess, drives him to escape the control of his wife. The founding of America is, in this case, and the act of excess and might be considered a loss of sensibilities. Therefore, man, unwilling to be governed by England any longer and acting contrary to sensibility, establishes America as a nation in an assertion of their own masculine power. Further, it remains without the oversight of a “mother country” by establishing a government that is based upon an aggressive show of masculine excess. This construction is important because it provides a framework from which America can struggle to redefine itself after the revolution and find direction as a newly formed nation.

As a result, Rip is forced into his own identity crisis, which is the symbolic representation of America. He wakes to wonder if “both he and the world around him are not bewitched”. Rip slept excessively and awoke without an understanding of who he was or how the world had changed, just as Kimmel might argue that man was bewitched by his desire to pursue excess. However, like America, Rip quickly recovers from this loss of identity. Irving writes that when he “took his place once more” in the world and began “making friends among the rising generation” that he found his identity, and that he was who he had always been.

This is exceedingly important in defining who and what America was after the revolution. In many ways, America had been found before the revolution. Just as Rip was “kind”, so was American by establishing the idea of escaping persecution and living a better, more peaceful life. Similarly, just as Rip had been obedient, the British colonies had been obedient until the point of the revolution. After the revolution, the citizens, like Rip, returned to being law abiding and willing to be governed. The longtime rule of the wife character and her ability to limit the masculine excess of the Rip character has resulted in the character thought of to be less manly, if not effeminate than he should be. Rip is not martial, but passive, henpecked, and longsuffering. As such, while war is an act of masculinity, he chooses not to go at all, but rather slept through the war until it was over.

This may be symbolic of the fact that Irving felt America was too slow going to war to assert its independence. This also allows him to symbolically represent the new national government that is democratic and organized, rather than falling into chaos in more masculine hands. This also, in many ways, reflected the ruling class of Van Winkle’s social surroundings. The village is run by “sages, philosophers and idle personages” who refuse to take up the political drum and seek change sooner. This, again, appears to be Irving’s personal opinion seeping into the allegory and aim at the colonists’ slow action in their own defense. He clearly feels that they should have taken action sooner.

Nevertheless, the success of society after the revolution is representative of the overall success of the revolutionary war and America’s pursuit of independence. The villages are “busy” and “bustling” with a great militia and “congress” after the revolution. His children, who were previously “ragged and wild” are “snug, well-furnished” and “cheery” after the war, demonstrating that society has grown, settled down, and finally found its identity. Washington Irving wrote Rip Van Winkle as an allegory describing America’s coming of age, and search for identity before, during, and after the American Revolution. Though he seems to criticize Americans for waiting so long to take action, it is clear that England had become a bully, and that America the henpecked, subservient victim within the colonial relationship, is ultimately better off having thrown off England and establishing independent rule.

The Use of Satire, Imagery, Irony, and Symbolism in Rip Van Winkle, a Short Story by Washington Irving. (2021, Sep 14). Retrieved from https://studymoose.com/the-use-of-satire-imagery-irony-and-symbolism-in-rip-van-winkle-a-short-story-by-washington-irving-essay 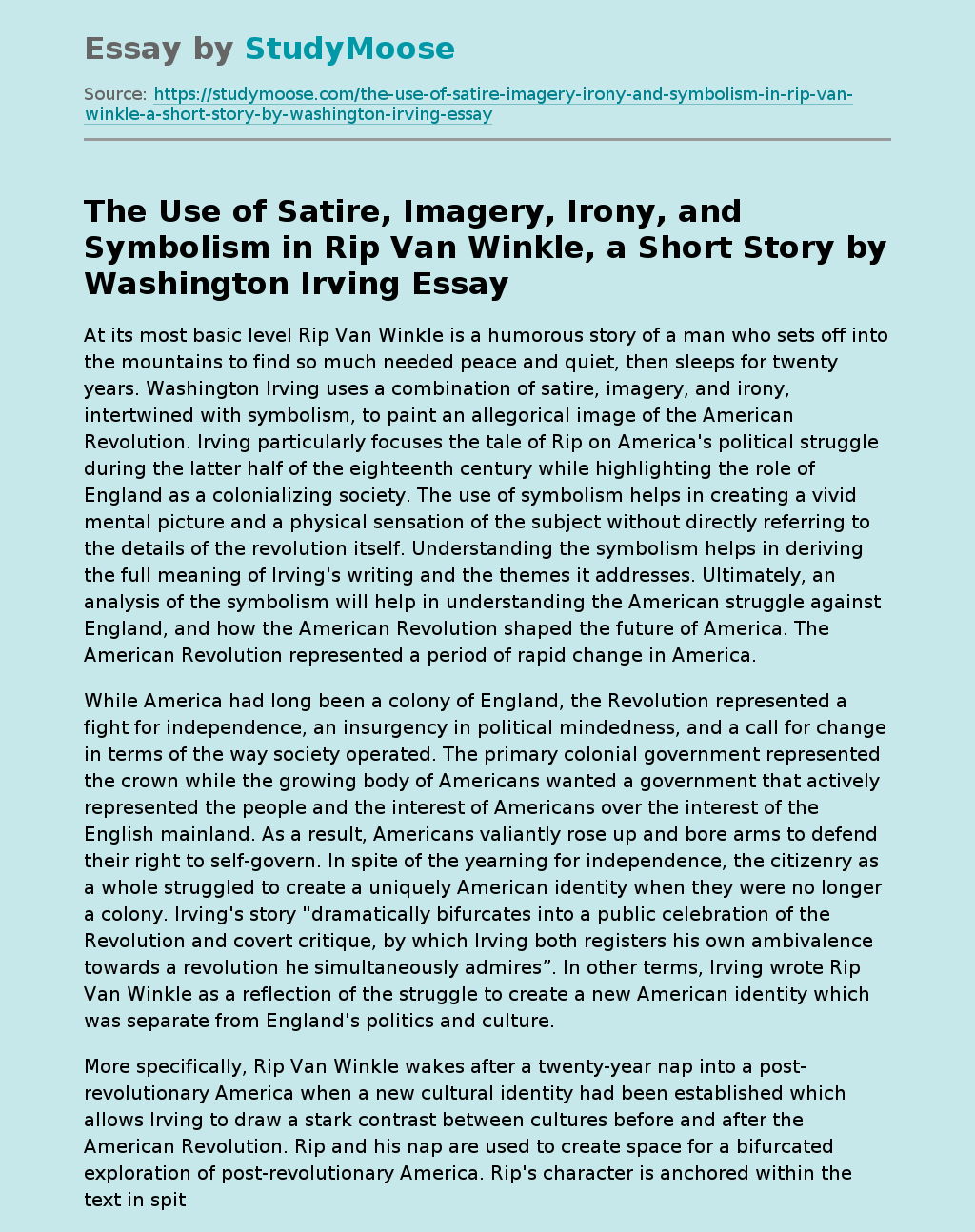