Blinded by Pride: A Study of Othello and Young Goodman Brown

“Pride cometh before a fall” according to the well-known biblical adage and the two characters about to be discussed each has pride powerful enough to have blurred their judgment. Therefore, excessive pride has caused irreparable damage, thus the fall, in each of the two title characters. The fall may have come in different forms but the emphasis is on isolation in both cases. In Nathaniel Hawthorne’s “Young Goodman Brown”, the main character becomes isolated from his neighbors because of his pride.

Don’t waste time
Get a verified expert to help you with Blinded by Pride: A Study of Othello and Young Goodman Brown
Hire verified expert
$35.80 for a 2-page paper

His suspiciousness of everyone else has led to his downfall. Meanwhile, in William Shakespeare’s “Othello” the main character’s pride is linked to his insecurities. Othello’s noble self-pride is sometimes extreme that he believes Iago’s whispers about infidelity on his wife Desdemona’s part. The imagined infidelity is hurtful, isolating Othello from Desdemona. At the same time, it confirms Othello’s belief that people consider him inferior and that nobody can truly love a Moor as black as he.

Even other people such as the villain Iago, believes that: “I say, put money in thy purse. It cannot be that Desdemona should long continue her love to the Moor– put money in thy purse” (1. 3. 342-344). Excessive pride can sometimes make a person feel superior to and patronizing towards others. Goodman Brown believes that he is chaste and good compared to his fellowmen because of what he believes he has witnessed. Because of this vision of himself being separate from the others’ downfall, he regards others with distrust and disdain.

After all, other people are sinners in his eyes. “A stern, a sad, a darkly meditative, a distrustful, if not a desperate man did he become from the night of that fearful dream. On the Sabbath day, when the congregation was singing a holy psalm, he could not listen because an anthem of sin rushed loudly upon his ear and drowned all the blessed strain (Hawthorne). It can be said, on the other hand, that in the case of Goodman Brown pride has been mixed with paranoia and hallucination that may have resulted from consorting with the Devil.

Nevertheless, in consorting with the Devil, Goodman Brown has already demonstrated pride. He thinks that he can cross towards the dark side and come back into the light anytime. In dealing with the Devil, he has rejected God and “Faith” in both its meanings: his wife and his faith in God. Moreover, Goodman Brown must have thought of himself as special in order for him to think that when he has sinned, the reasons and consequences for him are different from those placed upon the others whom he has learned to be suspicious of.

Being proud of oneself can sometimes be noble and right. However, this same pride can be twisted into something that dwells merely on self-preservation and suspicion. Hatred, suspicion and a diffident belief that nobody can truly love a Moor have resulted into Othello’s self-destruction and his desire to destroy the one he believes do not really reciprocate his love. The loving words turn into calculating plans for murder, all because of the word of one person: “Ay let her rot, and perish, and be calm to-night; for she shall not live.

No, my heart is turn’d to stone” (4. 1. 178). He also displays pride by immediately accepting his rushed judgment. It seems to be an example of excessive pride for Othello to believe himself to be such a good judge of character that there is no need to investigate into the veracity of the accusation. This fast judgment may also have sprung from Othello’s self-esteem. If there were mere suspicions before then Iago’s accusation has actually become the validation that Othello needs in order to boost his self-esteem.

He has find a companion whom he thought to be trustworthy because this other person is not afraid to tell him things that some people may be afraid to speak of with him because of his high position. Othello may have believed that others are just afraid to offend him by not revealing to him that he is difficult to love. Then, here is Iago who talks about his wife’s treachery. Though he initially seeks evidence that will prove his wife’s adulterous liaison, when presented the alleged evidence from the very same accuser his mind has become readily made up.

Since the presence of excessive pride in Hawthorne’s “Young Goodman Brown” has been established, it is the time to look at the fall, or the ultimate result of pride in the life of the main character. It must be recalled that his first move is to leave his wife Faith as well as his faith in God the night he decides to take a walk in the woods. “As nearly as could be discerned, the second traveler was about fifty years old, apparently in the same rank of life as Goodman Brown, and bearing a considerable resemblance to him, though perhaps more in expression than features” (Hawthorne).

This resemblance may be a sign that deep within Goodman Brown’s pious surface, there is a person who longs to venture into the dark side. It can also mean that the Devil is flattering him in order for him to succumb further into temptation. And so he does, but not in a way that is clear to him. He thinks that he has escaped evil because the Devil has let him see evil everywhere and in everyone, and he has not, from what he can remember, joined their “coven”. …elders of the church have whispered wanton words to the young maids of their households; how many a woman, eager for widows’ weeds, has given her husband a drink at bedtime and let him sleep his last sleep in her bosom; how beardless youths have made haste to inherit their fathers’ wealth; and how fair damsels… have dug little graves in the garden, and bidden me, the sole guest to an infant’s funeral” (Hawthorne). Goodman Brown has no idea that the Devil has polluted his thoughts and has destroyed his faith by giving him a corrupted view of the world.

He can no longer see goodness in any person and has thus lost contact with everyone else. Goodman Brown perceives even the most devout actions as mere pretense and at worse, blasphemy, performed in order to mask sin and evil. Because of this distress, he even doubts his own memories from the forest. However, unlike Kaye in the Snow Queen who in the end loses the splinter from his eye, the perception of evil has become too strong for Goodman Brown that it has affected his relationships with everyone. When he finally dies, “they carved no hopeful verse upon his tombstone, for his dying hour was gloom” (Hawthorne).

For Othello, his fall is more tragic. It is quite unlike the quiet destruction of Goodman Brown’s soul. Because of excessive pride, the Moor has murdered his own wife. Instead of humbling himself and not minding the possibility of being a laughingstock and a cuckold, he should have confronted his wife directly about the matter and believed what she has to say. The marriage can still be saved but his wounded ego cannot. It is this ego’s demands that he has listened to along with the slanderous lies uttered by Iago, who only seeks to destroy Othello for promoting someone else not him.

Meanwhile, Othello does not know that his anger and murderous energy have been directed wrongfully. If only he has known that it is Iago who is a villainous, two-faced liar. If only he has realized this and the fact that his wife is innocent early enough to save both him and his wife from the tragedy that ultimately strikes them. It is too late when he finally confronts Cassio, his wife’s suspected lover: “O the pernicious caitiff! How came you, Cassio, by that handkerchief that was my wife’s” (5. 2. 323-324)? The man in question has finally had the chance to explain why such evidence exists in his hands.

Finally, Othello discovers his folly and how he “threw a pearl away richer than all his tribe” (5. 2. 352). The Moor realizes that he has thrown away a woman who loves him truly, but whose love he is suspicious of and is therefore not worthy of. In the two texts, excessive pride is shown to be an evil in itself. Before Goodman Brown has taken a walk with the Devil he must have been a proud man already. This is the weakness that the Devil is able to identify and play with. This ends up into a lonely life and death for the title character.

In Shakespeare’s “Othello”, excessive pride prevents the main character from thinking clearly, exploring the situation and saving his and Desdemona’s life from the violent end they have suffered. If the moral of “Young Goodman Brown” is to see your own faults and weaknesses before condemning others’, “Othello” reminds the readers of the value of setting aside the ego in order to make the right decisions. Moreover, if Goodman Brown and Othello have not isolated themselves from others, they may have seen the truth and see through the lies.

Blinded by Pride: A Study of Othello and Young Goodman Brown. (2016, Nov 08). Retrieved from http://studymoose.com/blinded-by-pride-a-study-of-othello-and-young-goodman-brown-essay 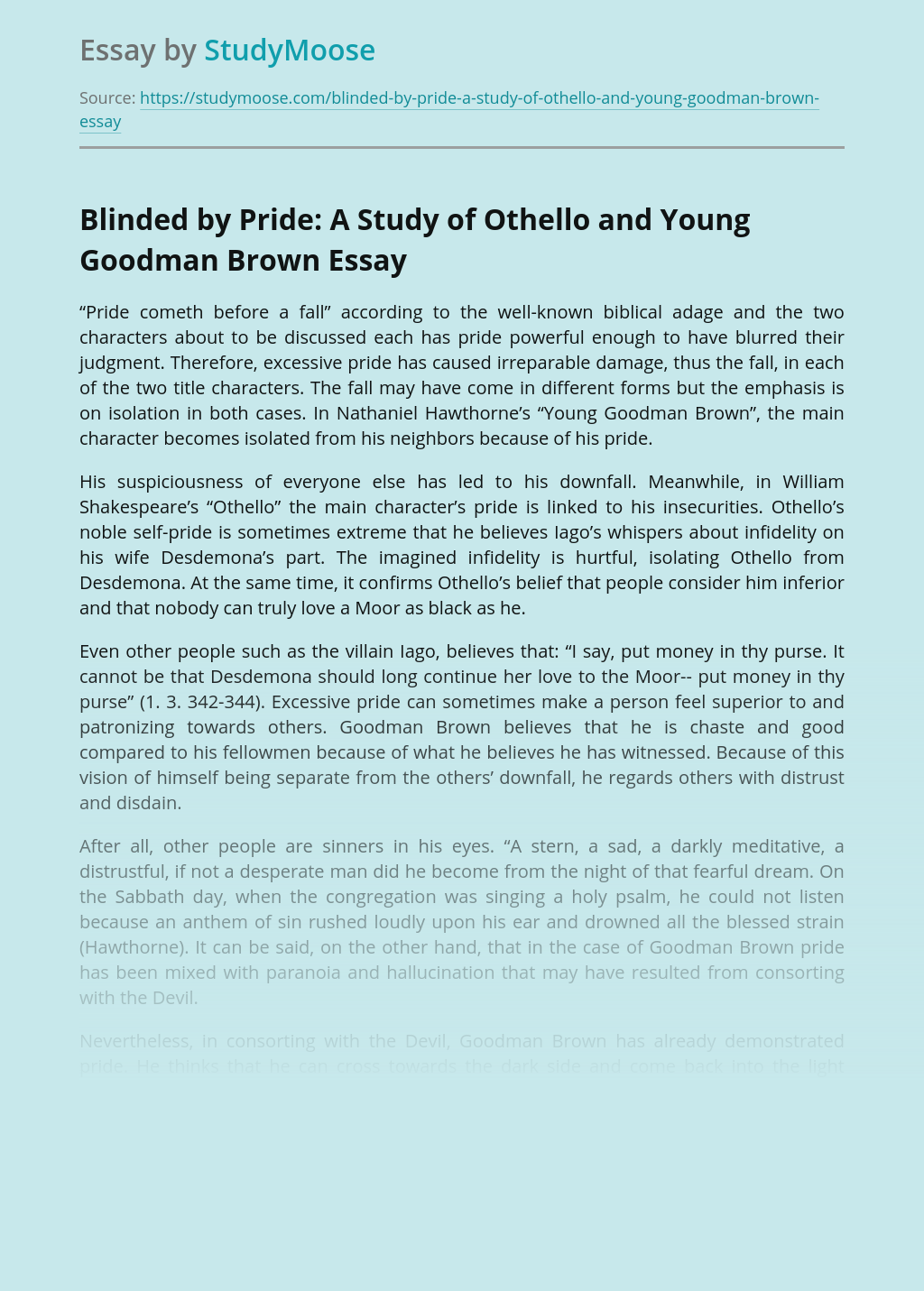 Don’t waste time
Get a verified expert to help you with Blinded by Pride: A Study of Othello and Young Goodman Brown
Hire verified expert
$35.80 for a 2-page paper
Stay Safe, Stay Original