The Young Goodman Brown by Nathaniel Hawthorne is a short story about a young Puritan who visits the woods and finds that a large majority of the villagers of Salem are part of a witch cult that meets in the deep woods at night. The first layer of this story reflects the hysteria surrounding the Salem Witch Trials of 1692, of which one of the magistrates and the interrogator was Justice John Hathorne, Nathaniel Hawthorne’s great-great-grandfather. Hawthorne’s story is an exploration of evil, especially the evil that lurks within humanity.

Don’t waste time
Get a verified writer to help you with Symbols in Young Goodman Brown by Nathaniel Hawthorne
Hire verified writer
$35.80 for a 2-page paper

Hawthorne’s use of allegory is to reveal that for every good thing there is an opposite, a bad thing human or not human. Hawthorne uses three different types of symbols in his story: Biblical symbols, Christian symbols, and otherwise uncategorized symbols.

Nathaniel Hawthorne with his strict Puritan background and family relies heavily on Biblical symbols in this story, especially since his main character, Goodman Brown, is Puritan. Goodman Brown meets a dark clad, unnamed man in the woods who carried with him a staff.

This staff has carved on it a snake, “great black snake….it might almost be seen to twist and wriggle itself like a living serpent.” (Paragraph 13) In the Old Testament, there are many references to a snake: in Genesis the snake that spoke to Eve and led her into temptation, in Exodus Moses’s staff that turns in to a serpent and consumes the staffs-that were also serpents-of the Egyptian magicians. The staff represents the Devil, who in this story is not a figure of fantasy, but actually character.

The devil is literally the devil, but also represents the devil that resides in everyone, whether admitted or not. Goodman Brown describes the woods as the “wilderness” (Paragraph 27).

The book of Numbers chronicles the Israelites wonderings through the wilderness for forty years as punishment for their sins. The witches and warlocks are compelled to meet in the woods in order to maintain secrecy. The wilderness is that, that lies within man, this wilderness is where all ‘evil’ comes from, it is here that man retreats and finds hatred and anger. Hawthorne purposely mentions the Egyptian Magi, who were a regular order among the Egyptians devoted to magic and astrology. In Exodus, it is the Egyptian Magi who oppose God directly with their magics and manage up until the plague of lice to replicate them. The witches and warlocks who gather in the woods in Hawthorne’s story oppose God, and are two-faced in their endeavors; they attend church meetings and appear extremely holy, but are truly evil.

The black mass of cloud that leads the way to the meeting represents leading man into evil and wrong by its color and the misdirection of the cloud. (Paragraph 48) In Exodus, Numbers, Deuteronomy, Nehemiah, Isaiah, Mathew, and Revelations there is the pillar of cloud by day and the pillar of fire by night to led God’s people to where He wanted them to be and to where they needed to be. At the meeting, there are four trees on fire, but not consumed, they represent a message from Satan. In Exodus, God appears to Moses in the form of a burning bush, around the bush is holy ground and from here Moses receives his directions to bring freedom where in the meeting what the members bring are chains of bondage. The rock in between the trees represents the taking of life and hope. Numbers speaks of the rock that followed the Israelites through the wandering years and when struck by Moses’s staff it brought forth water, bringing life and renewing hope. (Paragraph 48)

The rock also represents a bad foundation on which anything built will crumble in the storm. A common Christian teaching is to build one’s life on the ‘Rock’, anything built on Jesus will stand through the storm. (Paragraph 48) The people in the meeting are singing hymns while at their meeting. Hymns are a common enough sound and site in any Christian church, they sung in church services and in this story they characters mock God by using these hymns in their devilry. (Paragraph 47, 52) In the rock, there is a basin full of either blood or water reddened by the light. In every church, there is a basin, of some sort, that holds holy water for baptisms and other purposes.

In this story, the Devil has his own version of holy water. (Paragraph 62) In order to complete the initiating of the new converts, Lucifer must Baptist them. In the Christian church, there are two forms of Baptism child and adult and one is an important part of initiating a new member into the church and a declaration of their faith in God. (Paragraph 62) In the story Faith is brought up to the altar in a veil; this is a replication of the New Testament concept of the Bride of Christ. (Paragraph 54) The path on which Goodman Brown embarks is a narrow path. In the New Testament, the route to heaven is often said to be the narrow path or the narrow road. In this story, the path to hell is just as narrow. (Paragraph 8)

Hawthorne also makes use of other symbols these are not necessarily associated with Bible or Christianity, they are instead contextual symbols. The pink ribbons on Faith’s cap at the beginning of the story represent the innocence of Goodman Brown and when they fall out, they represent the loss of innocence. (Paragraph 1, 50) Faith’s name ironically represents faith in the goodness of man and when Goodman Brown loses Faith, it represents his loss of faith in the goodness of man. (Paragraph 3, 51) This story takes place at night. Night has long been the realm of evil and deviltry, twelve AM has long been known as the witching hour and three AM has long been known as the Devil’s hour, this all rooted in ancient practices.

Nathaniel Hawthorne presents a grim look at humanity in his short story, Young Goodman Brown. He also touches on the major issues of the time, which caused hysteria and fear among the good, Puritan citizens of Salem. Religious dissenters, such as Quakers and Roger Williams who founded Rhode Island, have brought problems within the ‘perfect’ Puritan society to the surface. The disputes with Native Americans especially King Philip’s War has led to more tension and dislike directed towards the Native population. Then the new diseases and animals that the Puritans have discovered make the New World appear to be a place full of witchcraft and sorcery that bring death. Altogether, these provide a perfect atmosphere for his short story, Young Goodman Brown. 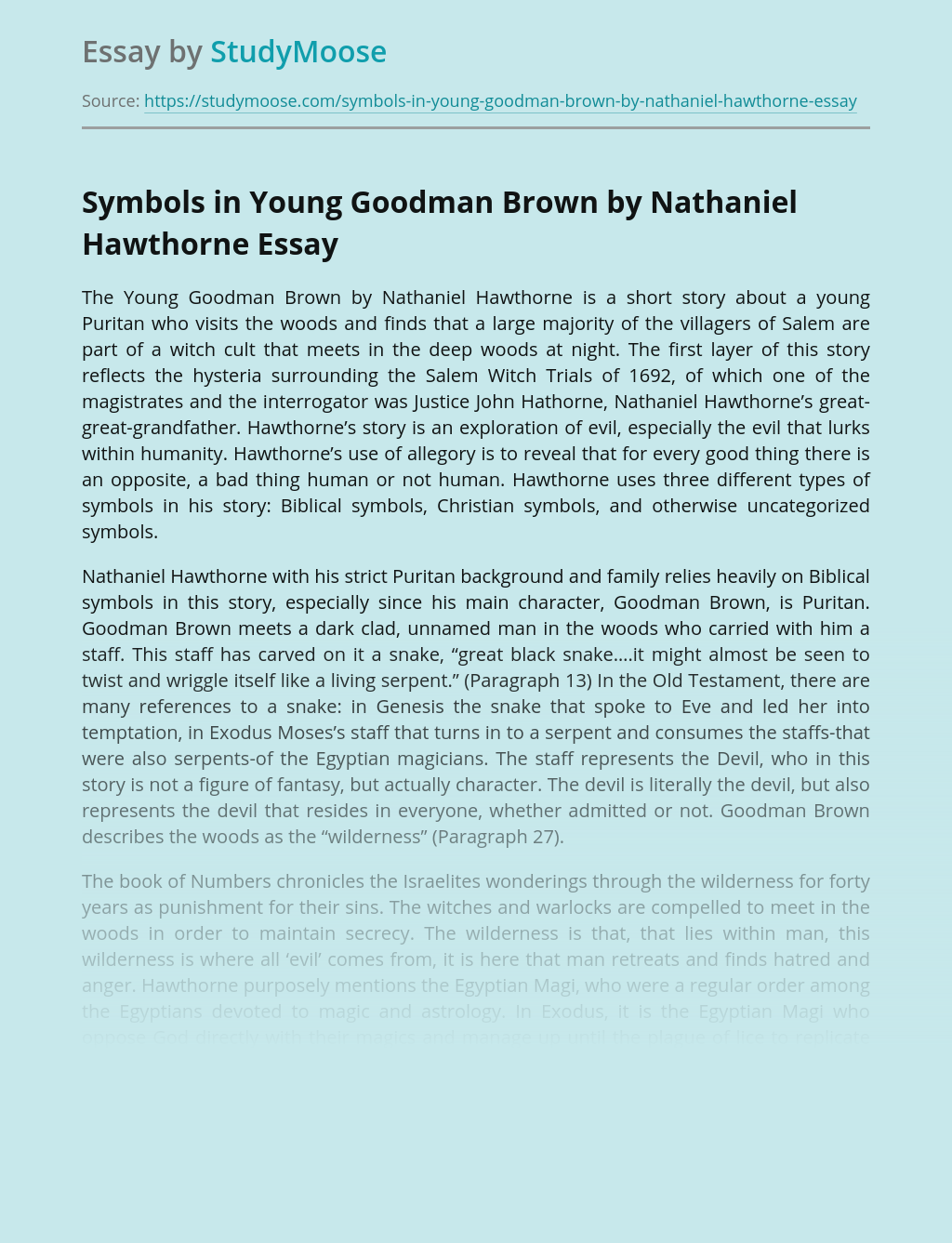 Don’t waste time
Get a verified writer to help you with Symbols in Young Goodman Brown by Nathaniel Hawthorne
Hire verified writer
$35.80 for a 2-page paper
Stay Safe, Stay Original