“Be it so if you will; but, alas! It was a dream of evil omen for young Goodman Brown. A stern, a sad, a darkly meditative, a distrustful, if not a desperate man did he become from the night of that fearful dream. On the Sabbath day, when the congregation was singing a holy psalm, he could not listen because an anthem of sin rushed loudly upon his ear and drowned all the blessed strain.

When the minister spoke from the pulpit with power and fervid eloquence, and, with his hand on the open Bible, of the sacred truths of our religion, and of saint-like lives and triumphant deaths, and of future bliss or misery unutterable, then did Goodman Brown turn pale, dreading lest the roof should thunder down upon the graqy blasphemer and his hearers.

Often, waking suddenly at midnight, he shrank from the bosom of Faith; and at morning or eventide, when the family knelt down at prayer; he scowled and muttered to himself, and gazed sternly at his wife, and turned away.

And when he had lived long, and was borne to his grave a hoary corpse, followed by Faith, an aged woman, and children and grandchildren, a goodly procession, besides neighbors not a few, they carved no hopeful verse upon his tombstone, for his dying hour was gloom” (Hawthorne 639). “Young Goodman Brown” is a short story by the author Nathanial Hawthorne. It is about a man of God that goes into the woods to meet the devil, and he gets initiated into the circle of evil.

The passage is the last paragraph of the story and talks about the outcomes of Brown’s journey and the change the character goes through. Hawthorne use of word choice, diction, sentence structure, tone, and theme, effectively show the reader Brown’s change in character. Many literary devices in the story leave the reader with the feeling Hawthorne intended in the end. The author’s word choice is incredibly important in the final part of the short story because it leads the reader to Goodman Brown’s final change and it shapes the theme and tone.

The first line sums up the story’s outcome of what has happened: “Be it so if you will; but, alas! It was a dream of evil omen for young Goodman Brown”(Hawthorne 648). The diction of this passage gives the reader a glimpse of the time period it is intended to represent which is the 1600s. The paragraph has many archaic terms and contains formal diction in its content. Words such as “fervid” and “alas” are examples of the eloquence and extended vocabulary that the story includes. Hawthorne’s choice in diction shows that the story is one that reflects religion.

Words such as “blasphemer”, “saint-like” and “congregation” display biblical connotations. The author continues his religious and dark word choice to shape the tone of the story. In the climax of the story, where Goodman Brown is in the forest and encounters evil, the reader starts to see the dark connotations. As the story continues and the question of whether or not the event in the forest actually happened, the story goes through its falling action as the protagonist concludes that the event was not a dream and from then on sees the people in his village as liars and imposters.

Words such as “deaths”, “dreading”, “pale unutterable misery” and “thunder” imply the darkness through color and synonyms of despair. This particular line in the story also gives insight to an inner guilt and self-loathing that consumes Brown. Young Goodman Brown’s curious wonder of evil leads him to journey into the devils clearing that night has brought this gloom. In addition to the religious suggestions throughout the story and passage, very negative and deathly words are used; this helps the reader interpret the theme of innocence versus evil.

Hawthorne describes this effect during the sermon on Goodman Brown when he says “… when the congregation was singing a holy psalm, he could not listen because an anthem of sin rushed loudly upon his ear and drowned all the blessed strain” (Hawthorne 648). In this line the reader sees how the protagonists mental and divine struggle makes something innocent, such as listening to the sermon, become something resentful and evil. Another important aspect of the paragraph is the author’s choice in punctuation and sentence structure.

When describing Young Goodman’s Brown gut wrenching aguish, the author’s use of descriptive words and commas made the sentence appear more important to exemplify the magnitude of Goodman’s troubling change. The author does this in lines 6-10 in the final paragraph using a total of six commas as Goodman describes his despair while he sits in church and listens to the sermon. Hawthorne’s choice of the long sentence structure is important because it shows Brown’s swarming thoughts of struggle, turmoil, and repulsion all at once.

Hawthorn’s use of punctuation and sentence length also makes a statement into what he has to say. Four commas are displayed in this one sentence, and recurring religious words shape the theme of it. What the author shows in this specific line shows the overwhelming feeling of the character his swarm of thoughts. Hawthorne effectively gives the reader an idea as to how haunted Young Goodman Brown is. In the sentence, words such as “hoary” and “gloom” are important because they portray how the main character is melancholy at the end of his life.

The author’s insertion of these words ties into the character’s development and description of his internal feelings and external effects that later made him act doubtful towards the people in Salem. The author’s choice of diction also gives a great indication of the time period in which the story would have taken place during the 1600s. This emphasizes the importance of religion held during this time. That is indicated in the first sentence of the story saying “Young Goodman Brown came forth at sunset into the street of Salem village” (Hawthorne 639).

When the author mentions Salem, the reader is encouraged to remember the infamous Salem Witch Trials. In the second line of the excerpt, Hawthorne writes about the Sabbath day and his struggle to hear the Sermon. The line demonstrates the author’s use of detail and descriptive words, and is written to inform the reader of the effects of his dream that created his fear of the religious society in his town. Words that previously would have been looked upon as testaments and words of encouragement in reference to his faith are now mere reminders of the demonic events Goodman previously experienced.

“Be it so if you will; but, alas! It was a dream of evil omen for young Goodman Brown” (Hawthorne 648) is the great reveal of the story where the reader learns that the experience Goodman Brown had the previous night was in fact a dream and not some supernatural occurrence, which is questioned by the reader at the end of the story. This is important because the reader sees that the protagonist’s change was due to a figment of his imagination, and not what really happened. The line “A stern, a sad, a darkly meditative, a distrustful, if not a desperate man did he become from the night of that fearful dream”(Hawthorne 648) is pivotal in the story.

This is where the reader is introduced to Goodman Brown’s change toward the religious society in his town. Previously seen as a man of good faith and morality, he has become the opposite, losing trust in the people around him who were once his comrades in faith. The author also tells the reader in this line about the fear Young Goodman Brown felt on that faithless night. He implies how the terrors still linger with Brown, and show a clear catalyst for this unsuspected change. Nathanial Hawthorne’s story “Young Goodman Brown” is one that speaks of an old Puritan society.

The concepts of religion, good and evil, and loss of innocence are all very important motifs in the story. The final passage is where the reader is showed not only the result of this horrible event and Brown’s actions towards society, but also his loss of faith. The final paragraph also tells how Goodman Brown’s trust in his wife is also affected. Early in the story, Brown says “Well, she’s a blessed angel on earth; and after this one night I’ll cling to her skirts and follow her to heaven”(Hawthorne 639).

This line in the story shows Brown’s initial loving feelings towards his wife. Brown’s wife, Faith, is referred to as an angel, someone pure and innocent. This sentence in particular is important because it contrasts how the character perceives his wife towards the end of the story after the supposed evil event. Hawthorne says how Goodman Brown’s attitude changes after the “dream”. Upon returning to the village, he ignores his wife’s excitement and looked “…sternly and sadly into her face, and passed on without a greeting”(Hawthorne 648).

The reader sees this disapproval towards Faith once again in the final paragraph when the author says “Often, waking suddenly at midnight, he shrank from the bosom of Faith; and at morning or eventide, when the family knelt down at prayer; he scowled and muttered to himself, and gazed sternly at his wife, and turned away” (Hawthorne 648). This is the author’s way of letting the reader know that Brown’s family’s continued practiced of their faith and his own strong religious background he came from still were not enough for his faith in people, and his religion to be restored.

In addition to showing how Young Goodman Brown’s attitude towards society and his wife changes, the author also explains how the society’s attitude towards Youngman Brown was portrayed by society. In the final sentence of the story Hawthorne explains “And when he had lived long, and was borne to his grave a hoary corpse, followed by Faith, an aged woman, and children and grandchildren, a goodly procession, besides neighbors not a few, they carved no hopeful verse upon his tombstone, for his dying hour was gloom”(Hawthorne 648).

Taken into context, the line tells the reader how the townspeople, despite being despised by Goodman for the rest of his life, still attend his funeral service. However, despite the townspeople’s attendance, Faith and society do not put a Bible verse on his tombstone. The reasoning for Brown not having a Bible verse on his tombstone is ambiguous in the story. However, the reader can interpret the reason being because he wasn’t friendly to the townspeople and he was dry with his wife for the remainder of his years.

Nathanial Hawthorne’s “Young Goodman Brown”, like many of his other stories, is part of a collection that exemplifies the Puritan Society, and sheds light on the time and the type of people the protagonist associated with. Hawthorne effectively writes this story about the Puritan intolerance and a man’s struggle between reality and a dream. The author’s choice of the location, time period, word choices, and sentence structure, develops the theme and tone that “Young Goodman Brown” shows in the protagonist’s experience where evil leads to loss of faith and into Brown’s ultimate seclusion. 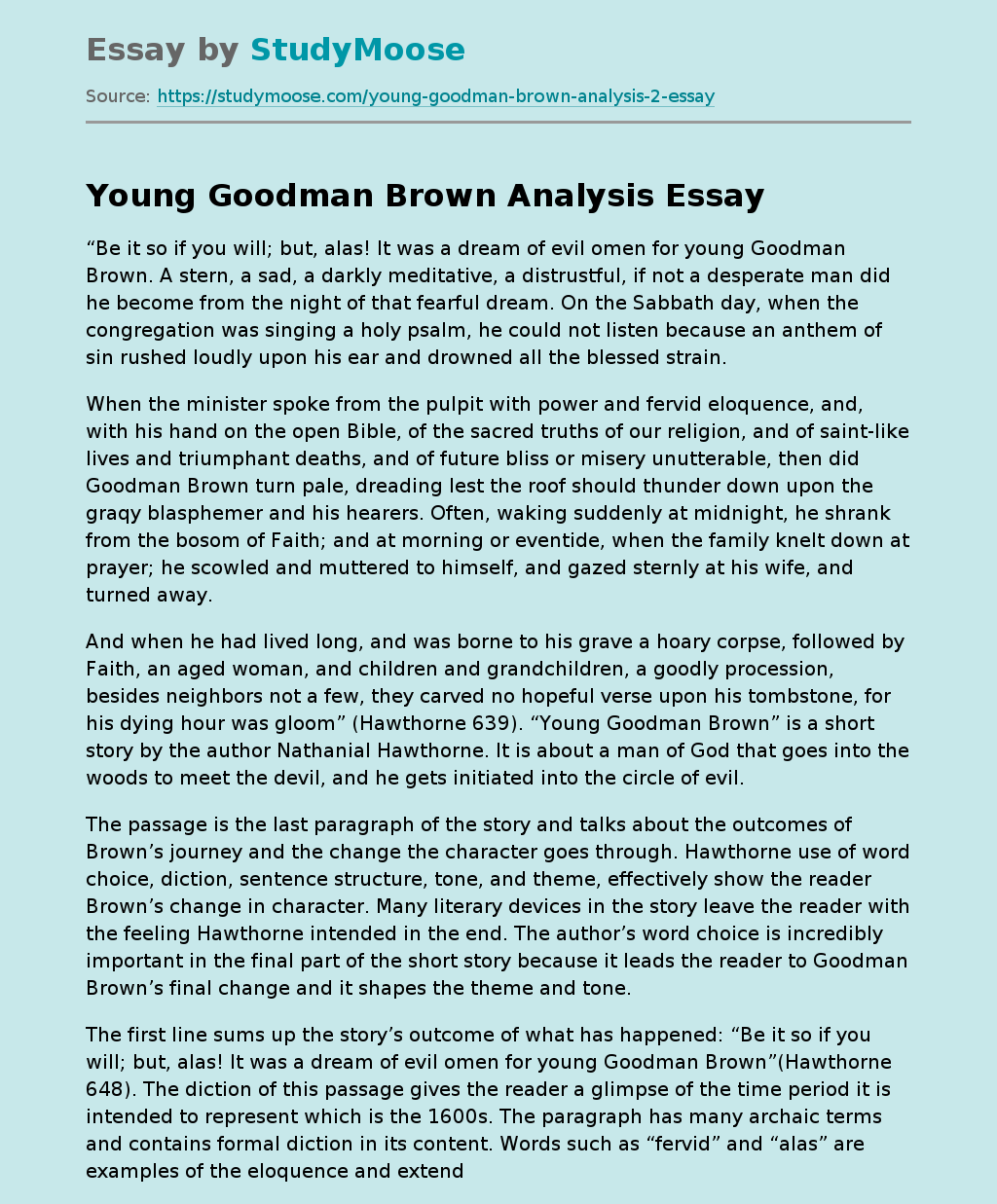