The Escape by William Somerset Maugham

William Somerset Maugham (25.01.1874-16.12.1965) is one of the best known English writers of the 20th century. He was not only a novelist, but also one of the most successful dramatist and short-story writers. The trend he belongs to is realism with slight influence of expressionism. Maugham wants the readers to draw their own conclusion about the characters and events described in his novels. His reputation as a novelist is based on the following prominent books: “Lady Frederick” (1907), “Of Human Bondage”(1915), “The Moon and Sixpence”(1919), “Cakes and Ale” (1930) and “The Razor’s Edge” (1945).

Don't use plagiarized sources. Get your custom essay on
“ The Escape by William Somerset Maugham ”
Get custom paper
NEW! smart matching with writer

The observer of the first decades of the 20th century, Maugham is deeply critical of the morals and the narrow-mindedness of his contemporaries.

In general, Maugham’s novels and short stories could be characterized by great narrative facility, an ironic point of view, cosmopolitan settings, and an astonishing understanding of human nature. Realistic portrayal of life, keen character observation, and interesting plots coupled with beautiful, expressive language, a clear, unadored style, have truly made Somerset Maugham a modern classic.

«The Escape» is a short story of the socio-psychological type.

Stories of this type are common for W.S. Maugham, who likes to depict and satirize existing social vices through feelings and relationships of his characters. To stress this fact, the exact time and place of action are not indicated in the story, which gives it the impression of a faceless common occurrence, possible to happen at any time in any place. The plot of the story is quite simple, though exciting.

The main character of the story, a strong man with plenty of money – Roger Charing – fell in love with Ruth Barlow, an unfortunate woman who was twice a widow. They had all the happy and pleasant moments of relationships a loving couple usually has and intended to marry.

The Escape by William Somerset Maugham. (2016, Dec 11). Retrieved from https://studymoose.com/the-escape-by-william-somerset-maugham-essay 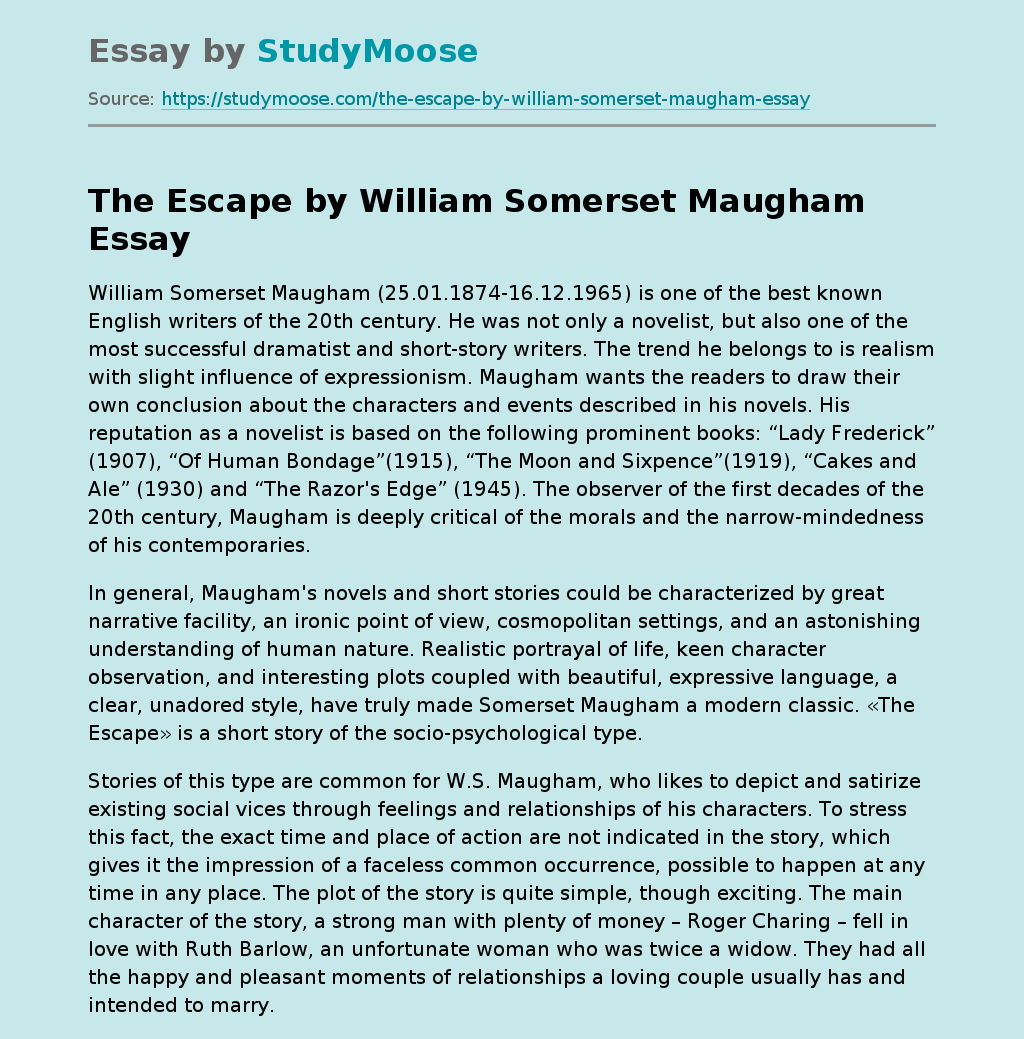