Analysis of "The Happy Man" by William Somerset Maugham

William Somerset Maugham (1974 – 1966), a well-known English novelist, short-story writer, playwright and essayist, was the son of a British diplomat. He was educated at King’s School in Canterbury, studied painting in Paris, went to Heidelberg University in Germany and studied to be a doctor at St. Thomas Hospital in England. Although Somerset Maugham did not denounce the contemporary social order, he was critical of the morals, the narrow-mindedness and hypocrisy of bourgeois society.

It was his autobiographical novel “Of Human Bondage” (1951) and the novel “The moon and Sixpence” (1919) based on the life of the French artist Paul Gauguin, that won him fame.

Don't use plagiarized sources. Get your custom essay on
“ Analysis of “The Happy Man” by William Somerset Maugham ”
Get custom paper
NEW! smart matching with writer

Somerset Maugham was also a master of the short story. His style of writing is clear and precise. He does not impose his views on the reader. He puts question and leaves it to the reader to answer it. When criticizing something he sounds rather amused than otherwise.

One of the best Maugham’s literary works is a short story “The Happy man”. In this text the author tells us about a successful man, who had a good job, a family, a nice flat in London, but he wasn’t satisfied with his life, he wasn’t happy and made up his mind to give up everything for uncertainty.

The story was written as the 1-st person narration. It can be logically divide into three main parts. The first part of this story represented as author’s narration. Here we can see different reflections of the protagonist about the life and the role of humans in it. In order to show us his disapproving attitude to ordering the lives of others our author used many different stylistic devices. For example in the first sentence “It is the dangerous thing to order the lives of others and I have often wondered at the self-confidence of politicians, reformers and such like who are prepared force upon their fellows measures that must alter their manners, habits and points of view. ”

Somerset Maugham used such an epithet as “dangerous”. In addition he twice resorted to the use of enumeration: “politicians, reformers and such like”, “their manners, habits and points of view”. Moreover in order to make the reader to think about the problem, which author’s toughies he applied such techniques as rhetorical questions: “I have always hesitated to give advice, for how can one advise another how to act unless one knows that other as well as one knows oneself?” , “And life, unfortunately, is something that you can lead but once; mistakes are often irreparable, and who am I that I should tell this one and that how he should lead it? ” and parallel constructions: “I know little enough of myself: I know nothing of others. ”.

One more stylistic device, which was used in the first logical part of our text is metaphor: “ Each one of us is a prisoner in a solitary tower and he communicates with the other prisoners, who form mankind by conventional signs that have not quite the same meaning for them as for himself.” (In some way all this sentence is a big metaphor) which shows that every person has his own little world in his soul and not always understand another people. Besides here we can see many epithets: “Life is a difficult business and I have found it hard enough to make my own a complete and rounded thing; I have not been tempted to teach my neighbor what he should do with his. ” which shows author’s attitude to life in general and to his life in particular.

The second part of the story was written in the form of a dialogue between the patient (Stephens) and our hero. Here William Somerset Maugham focuses on the guest (patient), who was described in this story as an unsure of himself person. He seemed a trifle embarrassed. Everything he does, once again proves his uncertainty and anxiety. For example when he went into the house he “had some difficulty in lighting cigarette without letting go off his hat. When he had satisfactorily achieved this feat I asked him if he should not put it on a chair for him.

He quickly did this and while doing it dropped his umbrella. ” The author used here such epithet as “satisfactorily” and “quickly” in order to underline guest’s awkwardness and his perplexity. With the same aim our narrator used another epithet “absent-mindedly” in the sentence “He was silent for a moment. He reached out for his hat and holding it in one hand absent-mindedly stroked it with the other. ” Besides he wedged into the history a number of short sentences. «I was brought up by two old aunts.

I have never been anywhere. I have never done anything. I have been married for six years. I have no children. I’m a medical officer at the Camberwell Infirmary. I can’t stick it any more ». It once again shows us that Stephens was excited and embarrassed. Then the narrator tells us about the reason for the visit of Stephens. This reason is our hero’s book about Spain, in the description of which Maugham uses the epithet “not a very good. ” In this way he shows us that our hero is self-critical and humble man.

Stephens would like to ask the narrator about Spain because he didn’t know anyone who has at least some knowledge about this country. He wanted to consult with him of the departure there with his family. When the author describes main hero’s attitude to the guest and to his problem, he used such stylistic devices as antithesis “I had not given him more than a cursory glance, but now I looked at him with curiosity. “, different descriptive epithets “He was a little man, thickset and stout, of thirty perhaps, with a round red face from which shone small, dark and very bright eyes.”, allusion “«It’s not like a Carmen, you know,”, parallel constructions and antithesis ” there’s sunshine there, and there’s good wine, and there’s colour, and there’s air you can breathe. “, “Is it madness to give up a good safe job for an uncertainly? »”, “«I know.

But if you say take it, I will; if you say stay where you are, I’ll stay»”. We can see, that the departure to Spain was a very important theme to Stephens. He didn’t want money. He only wanted to change the atmosphere of his life. He wanted to be happy. The third part of the story is lyrical, and a bit romantic.

In the third part, our main character comes to Seville, and tries to find that stranger. He lived in an ordinary Spanish house, his room was littered with papers, books, medical appliances and lumber but he was really happy. It could be seen from his description: a dissipated, though entirely sympathetic appearance, and of course from his murmuring “Life is full of compensations”. In this part narrator shows us, that Stephens really went to Spain and only there he became a happy person despite the fact that he lost everything he previously have had.

The story tells us about different events, which followed one another: I heard a ring bell at the door; I led him into my sitting room; achieved this feat; he reached out for his hat; he left me; many years later; I happened to be in Seville, etc. The text is a descriptive one; there are many descriptive epithets here. For Example: “a modest apartment”, “a total stranger”, “an apologetic laugh”, “a cursory glance”, “a little man”, “a wonderful life”, “trifling indisposition”, “a squeamish patient”, “a dim recollection”, “a Spanish woman” and others.

Descriptive words make the text expressive and vivid. Besides the author employs many adjectives and contextual synonyms, which make the language expressive: “dangerous”, “hazardous”; “unwillingly”, “forced”; “confused”, “embarrassed”; “a total stranger”, “a perfect stranger”; “alter”, “change”; “twinkled”, “shone”. By this story, the author shows us that our life is full of compensations. Taking the risk, you lose something but also you can find something, which could be really important for you.

Analysis of "The Happy Man" by William Somerset Maugham. (2016, Sep 08). Retrieved from https://studymoose.com/the-happy-man-essay 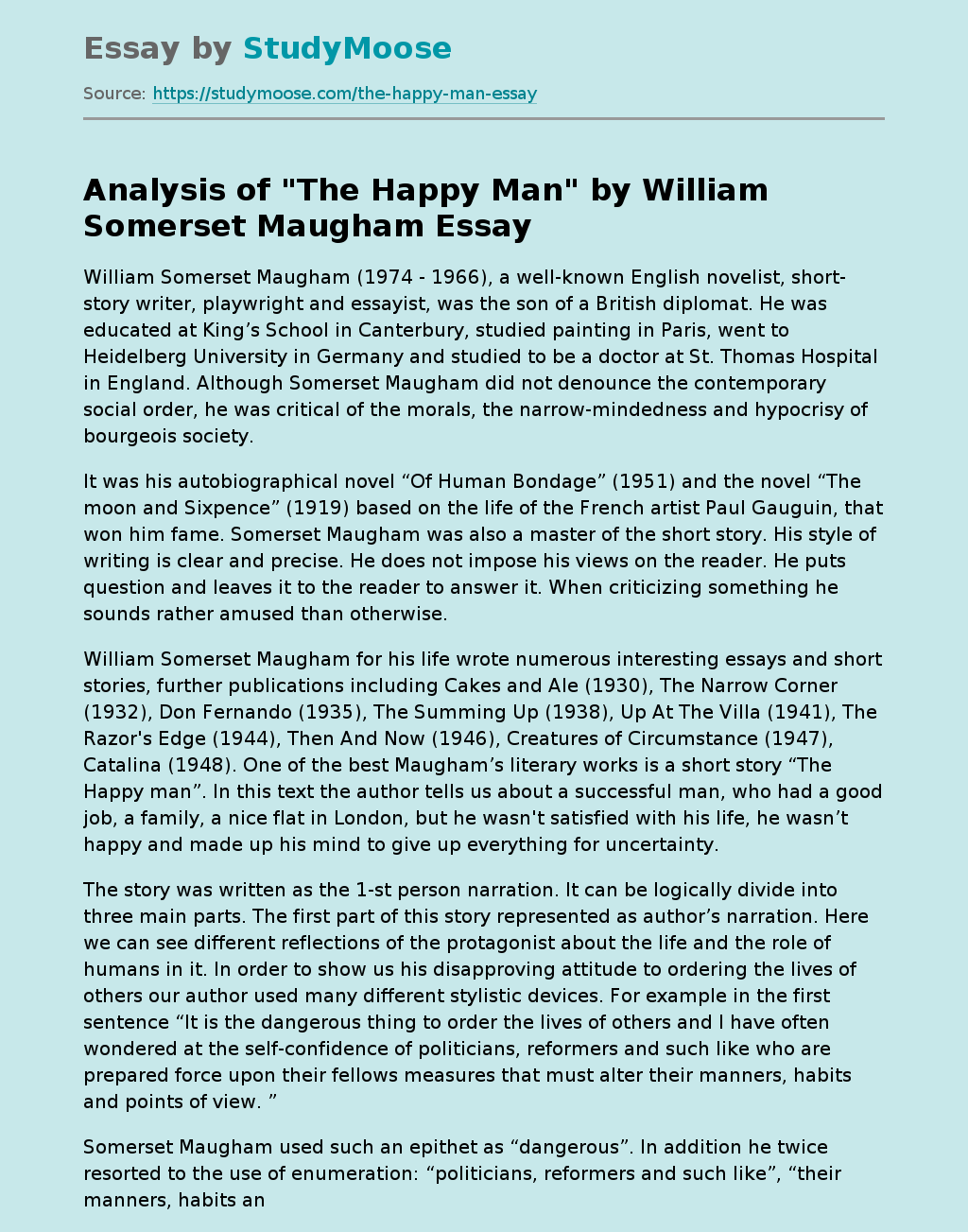