A Novel The Moon and Sixpence by Maugham

This extract from “The Moon and Sixpence” by W. Somerset Maugham is written by vivid, ironic language. It is about a poor artist, whose paintings were considered by contemporaries absurd. And they were much surprised when dealers from Paris and Berlin began to offer for them the huge sums. Strickland didn’t make impression on people, for islanders he was just a “beach-comber”, differing from others only that he drew strange pictures. It is impossible to tell that he formed relationships with people.

Don't use plagiarized sources. Get your custom essay on
“ A Novel The Moon and Sixpence by Maugham ”
Get custom paper
NEW! smart matching with writer

He not only didn’t appreciate material benefits, but also consciously about them refused: he refuses work as soon as earns on paints and a canvas. However, all the debts, he tried to return and if couldn’t give money, gave the pictures. Thus the picture also got to Cohen. Cohen was a Jewish trader, Maugham describes him as “little old Frenchman, with soft kind eyes and a pleasant smile, half trader, half seaman…”.

He is good-natured, friendly.

But despite seeming simplicity, Cohen is not a simple man; he is a wealthy, with good business acumen. He pities the poor, untalented, in his opinion, the artist and not only gives it work, but also subsequently borrows money, without hoping to receive them back. Cohen emphasizes his love for the artists and even hints at the proximity to the world of art. “I have always had sympathy for artists. It is in our blood, you know”. The author in the text plays a role of the observer; he pushes the interlocutor to further development of a plot.

Maugham doesn’t give own comments, any accurate assessment to Strickland’s creativity. He reproduces the character through descriptions of other people, from time to time sneering at them. Inhabitants of the island found Strickland’s pictures strange and incomprehensible, and they were very surprised when on them there was a demand.

Of course, the relation to the paintings changed dramatically. But people do not regret that do not recognize the genius in a stroller who lived near. They regretted the lost opportunity to buy his paintings for pennies, that in a consequence to earn on them. Neither the old Frenchman, nor his wife did not understand the picture presented to them for debt. They have not even thought about hanging it in the house, Cohen honestly admit it. “People would laugh at us”. And the fate of canvas could have ended in the garbage, if not for Cohen wife, who never throw anything away. And the picture was forgotten in the attic for many years. The author mocks people’s attitude to art incomprehensible to them, that is unlike on habitual, it seems to them wrong.

The main shortcoming, according to Cohen’s wife was in not realness of a landscape: “… it doesn’t resemble the plantation and I have never seen cocoa-nuts with blue leaves…” The author shows not only narrow perception of the wife of the dealer but also her brother, who having received a picture, solved that it is a joke. “I would not have given the cost of postage for the picture. I was half afraid to show it…” In the text practically there is no description of the picture, heroes admit that don’t understand it, a cloth was remembered only because of the cost which was offered for it. And it isn’t surprising that in connection with a cloth the word “money” infinitely adjoins. The author shows rigidity, inflexibility of people, it is difficult to them to accept something new, it is difficult to be beyond the habitual.

A Novel The Moon and Sixpence by Maugham. (2016, Sep 30). Retrieved from http://studymoose.com/a-novel-the-moon-and-sixpence-by-maugham-essay 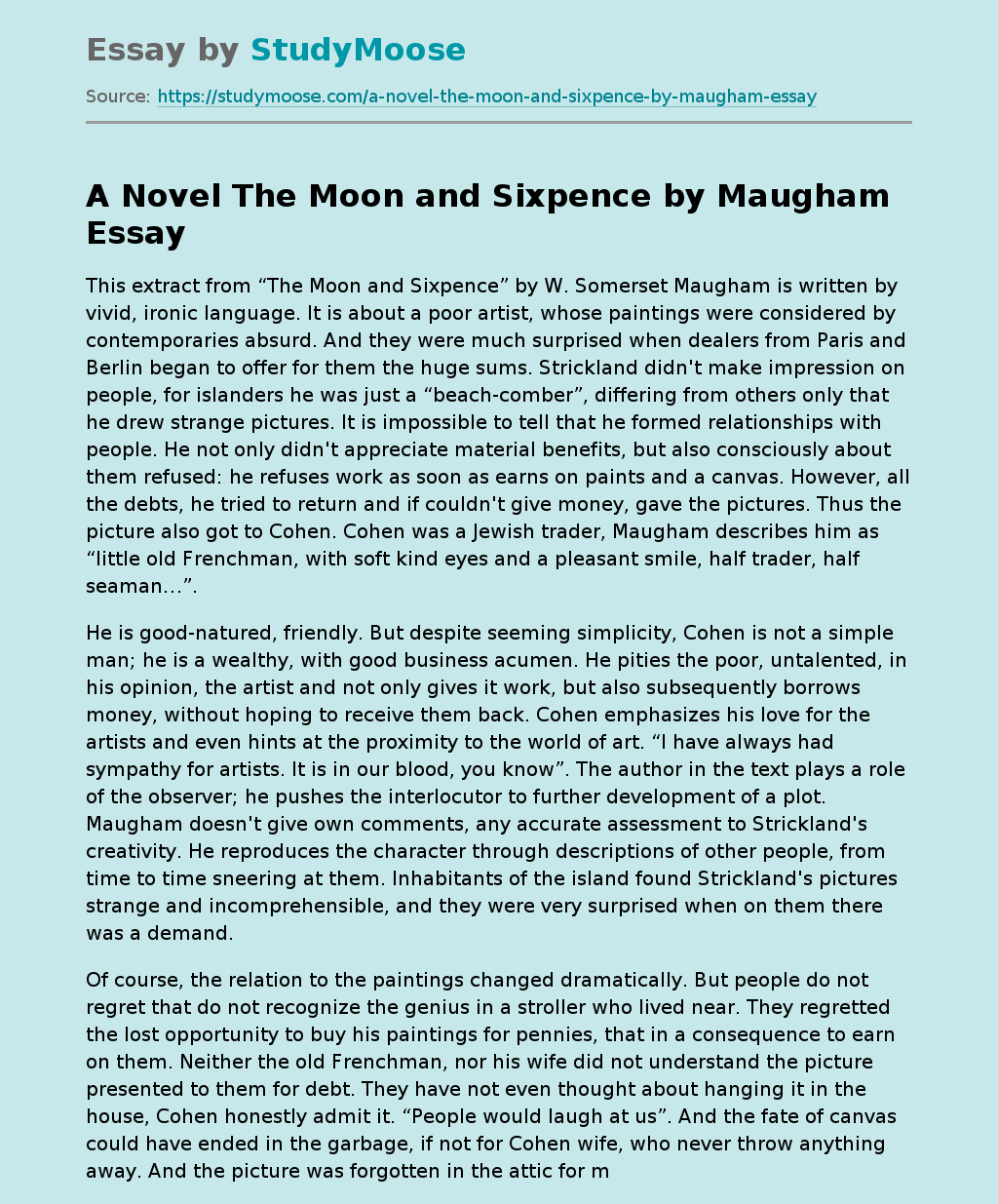