the crew worries in an evocative tone Water water everywhereAnd

the crew worries in an evocative tone:

And all the boards did shrink

Gitanjali narrates her pathetic story to Markose. She and her family reside in a metropolis city where she has missed her daughter Kayal. Four days later, she finds her small daughter outside and she continuously saying the word poh-poh (go go) to everyone she meets. The guru of Gitanjali suggests her to stay close to the water for few days to heal her neurotic child.

Don't use plagiarized sources. Get your custom essay on
“ the crew worries in an evocative tone Water water everywhereAnd ”
Get custom paper
NEW! smart matching with writer

Gitanjali brings Kayal to Aathi. She says that she can hear the water talking to her daughter Kayal. When Kayal takes a dip in the water, she slowly regains her speech. Giatanajli declares: “it is Aathi that restored Kayal to me. I now know that water is the synonym for peace” (328). She understands the value of nature, especially water. Having heard of the story, Markose comes to know the power of his own land and recollects the words of Dinakaran who used to assert:

“We need to understand the water, Markose.

Not “know” in the usual sense of the term, we must know the water as the lotus knows it: rooted in the sludge below, growing its stem in the water, unfurling its leaves on the surface of the water, and offering its wet and watery face to the sun” (61)

As an environmentalist, Sarah projects the ecological issues of her time through the character of Parinju Mash and Nithya Chaithanya Yeti.

Parinju Mash has come to the collector office to need justice against the drainage problem of Guruvayoor. He has shown a letter which contains the complaint of abhorrent situation of Guruvayoor. In the letter, yeti had mentioned his own experience in Guruvayoor:

“once when I hd to pass by the premises of Guruvayoor temple, i had to run away to save my life, unable to endure the stink of human urine that beat in my nostrils, and the repulsive sights that abounded all along the roadside. Woe unto those who live in Guruvayoor” (91).

The novelist aim is to bring ecological and environmental harmony. Aathi retains ease until the arrival of Kumaran. The advocate Grace Chali helps the people of Aathi to file petition against this crucial action. The villagers come to his illegal plan against Aathi. Chandra Mahan rightly says, “sixty percent of the land being developed here lies on waterbeds. All of Aathi is a green zone meant only for farming. It cannot be used for any other purpose” (225). To safeguard their environment, most of the characters are ready to sacrifice their life. In order to save the villagers and the village Shailaja pours kerosene on her head and holds matchbox in her hand. She boldly threatens the police. In the end, judgement is given favourable to the people of Aathi. The people of Aathi deconstruct the embankment made by Kumaran. Water begins to flow freely. Kunjimathu is keen on rejuvenate the waterbodies of Aathi along with other women. Kunjimathu and her friends take an immense risk to restore the lost village Aathi.

Kunjimathu takes up traditional role of women. Eventhough kumaran doesnot marry her, she treats his parents as her own. “To this day, it was Kunjimathu who lit the lamps at the burial mounds. One wick for Thampuran. A second for Kumaran’s father. A third for Kumaran’s mother. That was love” (41). We observe the life of Aathi that is metamorphosed from abundance of pure water to sewage dump, from satisfaction to starvation, from unity to abandonment, from peace to violence and successively from healthy life to tragic death. The novel traces the natural connection between women and nature. Here women are so close to nature. They spend most of their time working on the farms. Some of the female characters like Kunjimathu, Gitanjali, Shailaja, and many others are fighting against the annihilation of Aathi. They are merged themselves to their surroundings, their societies, their families, and an unpolluted land. The novel awakens the readers with several questions: what is development that is ravaged the environment? Where are we dumping our garbage waste? How is garbage and septic waste disposed? Nowadays where are we going forward in the name of development?

In the Old Testament, the flood of Noah cleans the sins of human and then it flourishes into a new one. Likewise the village, Aathi is completely wiped out by flood and then it flourishes into an unpolluted land. Nature eventually succeeds in upholding its authority. Here the nature creates culture and when people move against it, the nature itself destroys what it has created.

Sarah Joseph points out that whenever man tries to rule over nature, it will show its cruel face in the form of natural disasters and subjugate man under her custody. Man is in no way superior to other living species or non living. Man is a part of nature, but nature never depends on human beings for its survival. Sarah writing acts as a source of inspiration for the environmental literature. This novel gives a greenery vision to the reader to drift towards the earth-centric view. The novelist advices that every human understand the value of non-human beings, animals, plants, and all non-human beings are the co-inhabitants of the biosphere.

She is successful in her attempt to show the quality of strength and courage in women and also her attempt to highlight certain issues related to development, urbanization, waste management, water contamination, environmental pollution, ecological degradation which we face both locally and globally. 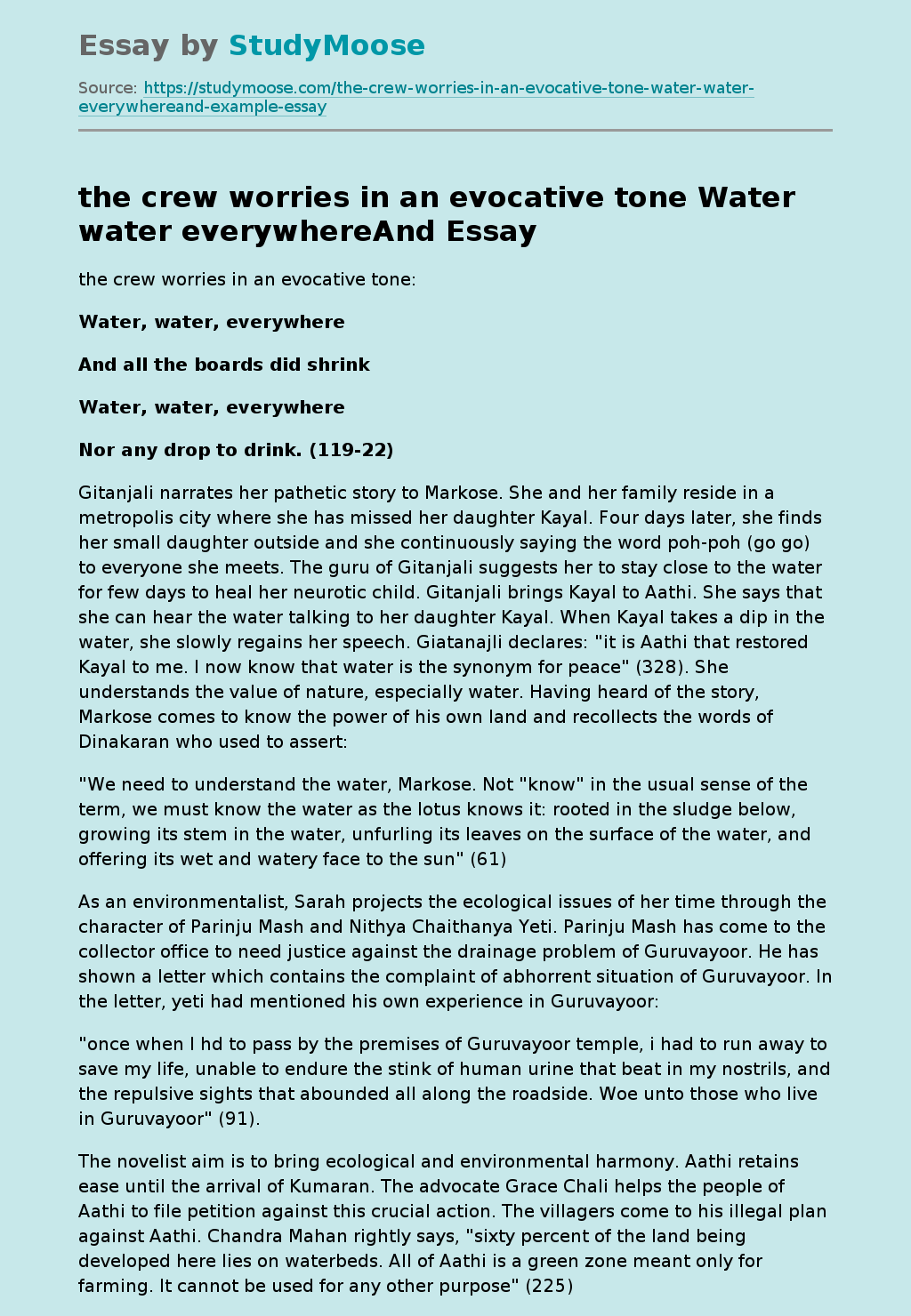