In the essay “The Color of Family Ties” by Naomi Gerstel and Natalia Sarksian, the authors assert that traditional nuclear families are not the only ones capable of supportive relationships and strong family connections. In the other hand, minority families also discover that their families illustrate the most supportive relationships and strongest family ties. According to Gerstel and Sarksian, they states “Black and Latino/a, especially Puerto Rican families are more disorganized than White families, and that their families ties are weaker” (47).

Don't use plagiarized sources.
Get Your Custom Essay on “The Color of Family Ties” by Naomi Gerstel and Natalia Sarksian Just from $13,9/Page

People usually believe Black and Latino/a are weaker and more disorganized than Whites.

In “An Indian Story” by Roger Jack, it talks about nontraditional families with supportive relationships and strong family ties, which is a good example to describe of minority.

In “An Indian Story” by Roger Jack is an example of family solidarity and care giving within a minority family. When Jack was just a young boy, his mother died, then his father remarried and started a new family that made the boy uncomfortable with his living situation. After that, he decided to go living with his late mother’s sister, Aunt Greta. It is an evident that even before he decided to move with Greta, Jack was very close to her when he stated, “I walked to Aunt Greta’s house and asked if I could move in with her since I had already spend so much time with her anyway”(53). This is our first example of the strong ties to extended family in this story. As the story progresses we learn that Greta has sacrificed not only for her nephew but for her father as well.

Greta had been married for a long time but her husband just died five years into their marriage. The reason why Greta and her husband never had any children and she never remarried was because she took care of her father after her mother died. The fact that Greta looked after her father demonstrates another tight family bond and support for one another but it was also evident that the two share a close relationship. The author states, “She [Greta] had so much love and knowledge to share, which she passed on to me naturally and freely” (53). Hence, tradition was very important to Greta’s family as well as their Indian culture and Greta shared it with Jack. During the years, Jack and his aunt form an even stronger bond and she became a mother to him as they shared many adventures together.

In “Looking for Work” by Gary Soto, Soto wishes his family were more like families portrayed on television. In his opinion, families portrayed on T.V. seem to be “perfect” and “normal”. These families seem to be proper and get along well with one another. Since this is what television shows families to be like, he believes this is ideal. If he is able to get money and have a better setup for his family, he believes that this will make them get along and make them happier.

Soto also mention that, “mimicked me the same day that I asked him to wear shoes…he came to the dinner table in only his swim trunks” (22). It shows that he has a good relationship between he and his brother. His family may not be dressed up or have as nice of a house as he desires, but they can enjoy one another’s company. The boy does not realize this at first, but at the end of the story he understands that no family is perfect but they are still a united family with strong emotional ties. The boy finally realizes that he is lucky to have a loving and supportive. Happiness can be achieved without being exactly like a white family.

In this essay, the two nontraditional families show the supportive relationship and strongest family ties. In addition, both of these writings help to form new ideas about untraditional or minority families teaching that nuclear families are not the only type of family that should be respected or considered when it comes to analyzing the closeness and supportiveness of families. Both are the great example of nontraditional families. It shows that the connections between “An Indian Story” and “Looking for Work”.

You may also be interested in the following: essay about family ties

“The Color of Family Ties” by Naomi Gerstel and Natalia Sarksian. (2016, Aug 08). Retrieved from https://studymoose.com/the-color-of-family-ties-by-naomi-gerstel-and-natalia-sarksian-essay 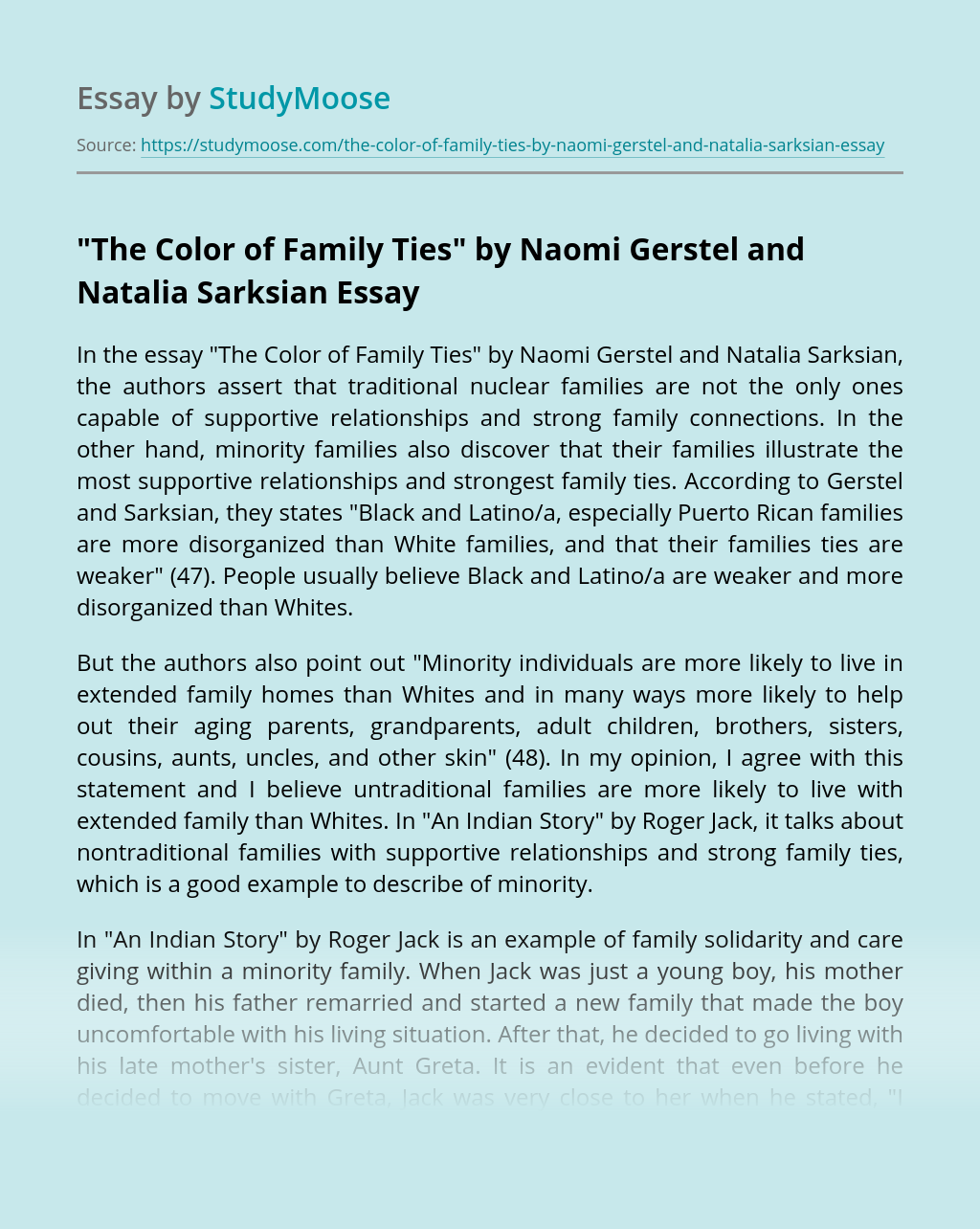 The legal status and principles of the framework

CHAPTER 3METHODOLOGY3.1 IntroductionThis chapter explains the method adopted by this research, describing the component involved in conducting this research from the population, population frame and sampling techniques used for the questionnaire. Finally, this chapter provides a detail explanation of the selected mode of analysis used and the data collection method.3.2 Research DesignGenerally, research design means... VIEW ESSAY

Below is a free essay on “Nvq 3 Health and Social Care Assignment 306 C” from Anti Essays, your source for free research papers, essays, and term paper examples. Moving and Handling Moving and handling is the core part of the day for most employees in the social care setting, legislation, policies and procedures that... VIEW ESSAY