The Centre of Goes

The area that was assigned to us is the centre of Goes. Because of our area being the centre of Goes it is quite a dense area with a lot of traffic and not much open space. The buildings in the centre of Goes are not very high except for the church. We also have significant amount stakeholders in our area. There is a lot of pavement and there is not much room for greenery. In the few open spaces that are available in the centre the Municipality has tried to implement as much greenery as possible.

Don't use plagiarized sources. Get your custom essay on
“ The Centre of Goes ”
Get custom paper
NEW! smart matching with writer

Because of the canals there is also quite a lot of water in our area. When it comes to the population, the city of Goes has around 27.800 inhabitants of which roughly 8.000 live in our area.

Our area is in the centre of Goes. The centre is framed in a red/orange line. The goal that Goes and The Netherlands has set out to reach is being both energy and climate neutral by 2050.

To achieve this, certain bottlenecks should be adapted and mitigated. The bottlenecks we deemed most serious include heat and CO2 emissions in the centre. Looking at both these issues certain solutions were thought up in order to adapt to the heat and mitigate emissions. The introduction of green walls, restricting high emission vehicles and promoting more train usage were those proposed in an aim to reach Goes’ goal by 2050.

Goes is a city striving to improve massively on climate resilience, energy neutrality, and strives to take part in the reduction of the amount of co2 that is emitted

There are several zoning schemes available for goes, of which most are updated after the 2000’s.

When deciding how an area will look in the future, many aspects are weighed equally. These aspects include the value of monumental buildings, livability of the area’s, noise, traffic, pollution, and things like shops and restaurants. It is also worth mentioning is how the city of goes started. Goes started as an agricultural center, after the dikes were built it became more of a city. The decision to build dikes was made after the 1134 flood (Raad van Goes, 2001)

The city of goes grew around the harbor, and this was mainly because it functioned as a large trade opportunity for the agricultural area in and surrounding goes. The salt production and Meek rap industry also contributed to this growth.

Because of the rich history, the older parts of goes are considered very valuable and are protected as monumental buildings. There is protection for monumental buildings, and these also add to the allure of the inner city is which is partly derived from the preventing of empty open spaces in the buildings. (Raad van goes, 2001, page 6) Goes after 1134 Goes in 1560

The inhabitants want to have a city in which they can live comfortably. Nowadays people also care very much about the climate so they will most likely be in favour of measures for an energy neutral goes.

The municipality wants to be climate energy neutral in 2045. So, they will also be in favour of measures to make goes energy neutral. The measures must be feasible.

A lot of industrial companies are willing to play their part in the fight against the rising temperature on earth, but right now it is cheaper to produce filthy than clean. Exactly for that reason are certain companies in favour for taxing on the amount of emissions by CO2. If there will be taxes on CO2, the companies who produce clean will have a better competitive position.

The Dutch banks have started contributing to the reduction of CO2. In July this year a lot of Dutch banks and financial organisations have signed an accord with the goal in mind to reduce their CO2 output by 49 percent. Although it should be known that not every bank has signed, this won’t make less of the accord.

In Goes’ center the two bottlenecks that were present were heat and emissions. An additional bottleneck present would be fluvial flooding, but we chose heat and emissions because there are far more options regarding solutions. When it comes to heat as a bottleneck it is most common if not only during the summer, this doesn’t change the risks it poses. The elderly and those with medical conditions are most at risk due to these heat waves, which can also end up fatal. Heat doesn’t only affect the elderly and those with medical conditions, it’s also quite a nuisance to anyone out during the day. The center of Goes is a nice place to go during the summer as there are plenty of nice spots and shops to visit whilst walking through. But walking through in the heat can be quite annoying and reduces the time spent out in town shopping as opposed to other places like cafes and terraces. When it comes to this heat, the main cause if undoubtedly the Sun and its solar radiation but paired with an area which most of the surface is stone, tiles, and other solid objects, most of the heat is retained and sunlight absorbed. This in turn causes the surrounding area to heat up as these materials re-radiate, in this case, the Centre.

The second bottleneck to focus on is CO2 emissions. The center of goes is no surprise when it comes to emissions. Vehicles drive through the area producing large amounts of CO2 emissions due to the popularity of the city centre, much like other city centers. If Goes wants to be energy neutral by 2045 it needs to cut down on the emissions, and the best place to start this is in its heart, the center. The cause for most of the emissions here is due to the large amount of vehicles. The worst being; diesel vehicles, trucks, older vehicles that do not conform to today’s standards, and buses. With the many stores needing to be supplied, there is no surprise that trucks are here quite often. Idle time, which can also be applied to other vehicles, is an issue, these large vehicles consume a lot of fuel, and whilst they idle, even more. Which brings us to the solutions of these bottlenecks.

The first and adaptive solution for heat would be green walls. To start, green walls are installations that can be placed outdoors and indoors, although when it comes to the centre Goes, we are looking at outdoor green walls. These are made up of different plants depending on preference. (Mustonen, 2018). Greenery in general acts as a natural heat sink, absorbing heat so introducing more greenery to the centre would have a positive outcome. But taking into account the amount of space necessary for greenery such as trees, an area such as the centre would struggle to a certain degree. For this the green walls are a great solution, it introduces more greenery to the centre whilst taking up significantly less space a tree would, all the while giving some of the same benefits. Benefits they introduce include dropping the surrounding temperatures on a hot day by around 1.5°C, which can have a profound effect on people out in the day. In addition to that, green walls act as an insulator which keeps buildings cooler on the inside. Not only does it help decrease temperature, it adds a nice aesthetic as well as acts as a CO2 absorber. (Mustonen, 2018). Another addition to this could be adding green roofing as this would drop the absorption of heat from the Sun on solid rooftops. (Mustonen, 2018). Although this would only work on compatible buildings and with the consent of involved stakeholders.

As mitigative solutions to reduce CO2 effects we had multiple ideas. The most direct solution that is also very effective is for more people to go by train. Travelling by train is up to several more times less CO2 emitting then traveling by car. When you travel to a destination by car with 4 people, the car still emits more CO2 then if you were going by train. A small solution the municipality of Goes can do is to promote this (train/carpooling).

Another part of this is reduce the amount of older, more polluting cars. We propose restricting these vehicles from entering the centre and those that breach this will be given a fine for driving these kinds of cars, and/or completely excluding them from entering the city centre. The money raised by fining these kinds of cars could go to projects like the previously mentioned green walls, or other energy/co2/climate neutral projects.

Stakeholders which will be involved into the solution strategy:

Note: the stakeholders are highlighted will be involved into the solution

How does this contribute to the goal?

The measures of introducing green walls and restricting emission heavy vehicles from the centre contribute to the goal of being energy neutral and climate proof by 2050. Green walls introduce a means to combat the ever-rising heat experienced every year as well as contribute a source of CO2 absorption in which case will improve and clean air quality. Helping with attaining the goal of being climate proof. Secondly the restriction of high emission vehicles will directly contribute to becoming climate proof as less and less emissions are produced in the centre which whilst also promoting the installation and use of more electric chargers and vehicles will bring a positive step to reaching a climate proof Goes and Netherlands by 2050.

When it comes to the adaption to the adaption of the new climate, there is a lot to be done. The same counts for the mitigating of the emissions. Since the municipality has set the goal to be climate neutral in 2045 there has to be taken action immediately. The heat stress problem can be resolved well by planting greenery. Unfortunately, there isn’t a lot of space in the centre of goes so we couldn’t plant new trees or create new parks. Instead we thought a bit more out of the box and came up with the solution Green walls. Goes has a lot of inhabitants, because of that it also has a lot of cars. We propose to reduce the amount of CO2 by fining heavy emission vehicles like trucks and old diesel cars. We believe our conclusion can seriously contribute to an energie neutral Goes.

The Centre of Goes. (2019, Dec 08). Retrieved from https://studymoose.com/the-centre-of-goes-essay 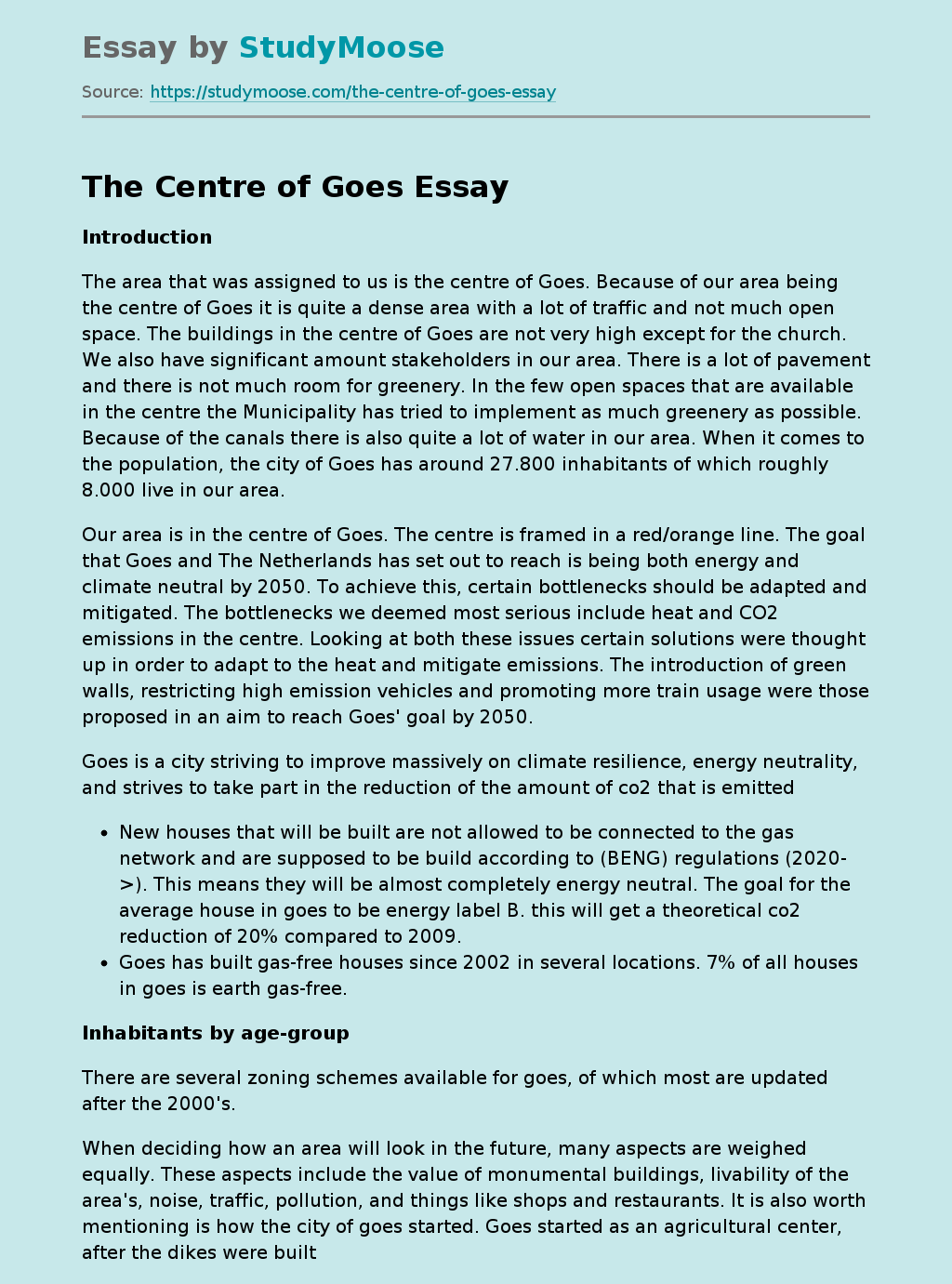