The American Revolution began in Massachusetts at Lexington and Concord on 19 Apr 1775. On 3 Sep 1783, 8 years later it officially ended. Although the war took 8 years to end, the fighting was not one constant continuous effort without any major battle being fought after 1781 (Revolutionary War, 1996). The war was victorious with 13 British colonies in North America winning their freedom and becoming what is now known as the United States.

In 1770 the Boston Massacre occurred. It was a direct result of Parliament, being compelled by British store owners who were losing their colonial trades (Agresto, 1979).

Don't use plagiarized sources. Get your custom essay on
“ The American Revolutionary War History ”
Get custom paper
NEW! smart matching with writer

This was an effort to try to soothe the colonists by repelling the Townshend Acts. The Townshend Acts came into existence in 1767 and was created by Charles Townshend. The act was passed by English Parliament. It was put into place to collect taxes from American Colonists by adding import customs to items such as paint, glass, lead, and the well-know tea (Townshend Act, 2007).

Colonial relationships with their home country were already strained due to events such as the Townshend Acts and the Boston Massacre.

However, it is believed that when an attempt was made to tax tea is what laid the foundation for the American Revolution. Parliament was already facing resistance from the colonies as they would not pay the taxes on the Townshend Acts. They argued that they were not obligated to pay because they were not represented by Parliament. Parliament went along with this; however, tea was excluded (The Boston Tea Party, 2002). Parliament attempted to devise a plan to fool the Colonies thinking they would rather pay taxes than live without tea, but it failed with tea sitting in a Charleston dock warehouse for 3 years.

That December in Boston, tea from 3 ships was dumped into the harbor and the Boston Tea Party was born.

At this point, the war was becoming one that was willing to give men the right to be free and also the right to set up their own government. Although the King may have more than encouraged a fight, independence was imminent. Talk of independence spread through the colonies like wildfires. The Royal government was eventually forced out as the colonies started devising out constitutions which was exhilarating as everyone loved the thought of freedom (Independence, 2004).

Although the Declaration of Independence was passed in 1776, what followed that passing was grim for the Americans. Immediately after the Declaration of Independence was passed, a British fleet arrived in New York City with soldiers hired by German rulers. The Battle of Trenton was fought in Trenton, New Jersey on the Delaware River. It was a battle between the British Troops and Hessians against the Americans (Battle of Trenton, 2010).

Washington had no choice but to organize his own troops. Washington and his men paraded into Trenton with blood traces following them in the snow. Colonel Rahl, which was the commander for the Hessians had direct orders to build defenses throughout the towns, but decided to go against the orders. Rahl was given information about the imminent American attack the prior night at dinner, but he did not respond; those missteps lead to his death and an American victory.

In the year to follow, 1777, it was a critical one with many developments. General John Burgoyne concocted a plan to conquer the Americans. A British Army lead by General Burgoyne began to move from Canada to Saratoga, New York. The bands of American soldiers were completely warned of the fact that of Burgoyne and his being there (Burgoyne, 2004). Because of this information the American’s were ready and out in record numbers.

When the 2 battles of Saratoga were finally fought, Burgoyne’s troops were outnumbered by American troops by almost 2 to 1. There was a treaty put into place that said that Burgoyne’s troops would be taken as prisoners in Boston and allowed to be returned to England under the condition that they never fight in North America again. Burgoyne gave up the rest of his men and that was a turning point for the war (Hickman, 2010). Saratoga’s victory played a key role with the treaty of alliance with France.

Victory was finally won in Yorktown, Virginia in 1781. The end of the fighting seemed near when for the American Colonies when Cornwallis signed orders to surrender his British Army to both American and French forces outside of the tobacco port of the town of Yorktown in Virginia (Yorktown, 2004). Washington thought he had a small time period to corner Cornwallis in Virginia, so he and Rochambeau moved from New York and headed south fast. When an officer from the British Army finally surfaced, he surfaced with white flag on the stockade that was surrounding them in Yorktown. When this happened, quiet fell upon the land with all of the American and French guns falling silent.

As the battle ended, the British drums played “The World Turned Upside Down” which meant that the colonies no longer belonged to the British, but to the America’s. Prime Minister Lord North resigned his position after Yorktown’s victory. The successor Prime Minister thought that France and America should make peace and that the war should end (Taking Action, n.d.). 17 October 1781 was the official date that the British laid down their arms at Yorktown. The Treaty of Paris was signed in 1783 and was the contract put into place to end the Revolutionary War.

The Treaty of Paris represented peace between Britain and what is now the United States. The treaty was signed by Benjamin Franklin, John Jay, and John Adams, all of whom represented the United States. Despite the end of the Revolutionary War, smaller battles continued between the colonists and the British. The Proclamation of Cessation of Hostilities was issued by George III in February of 1783, concluding in the Peace Treaty of 1783 (The Peace Treaty, 2010). This Treaty is what officially put an end to the United States War for Independence.

In summation, two centuries of British rule was ended by the American Revolution for a large portion of the North American colonies which resulted in the creation of today’s United States of America. The Revolutionary War was an odd time for the Colonies and Great Britain. It has been described as “exhilarating and disturbing”. No matter how one describes this era it can absolutely be understood that without that era progression may have never happened. 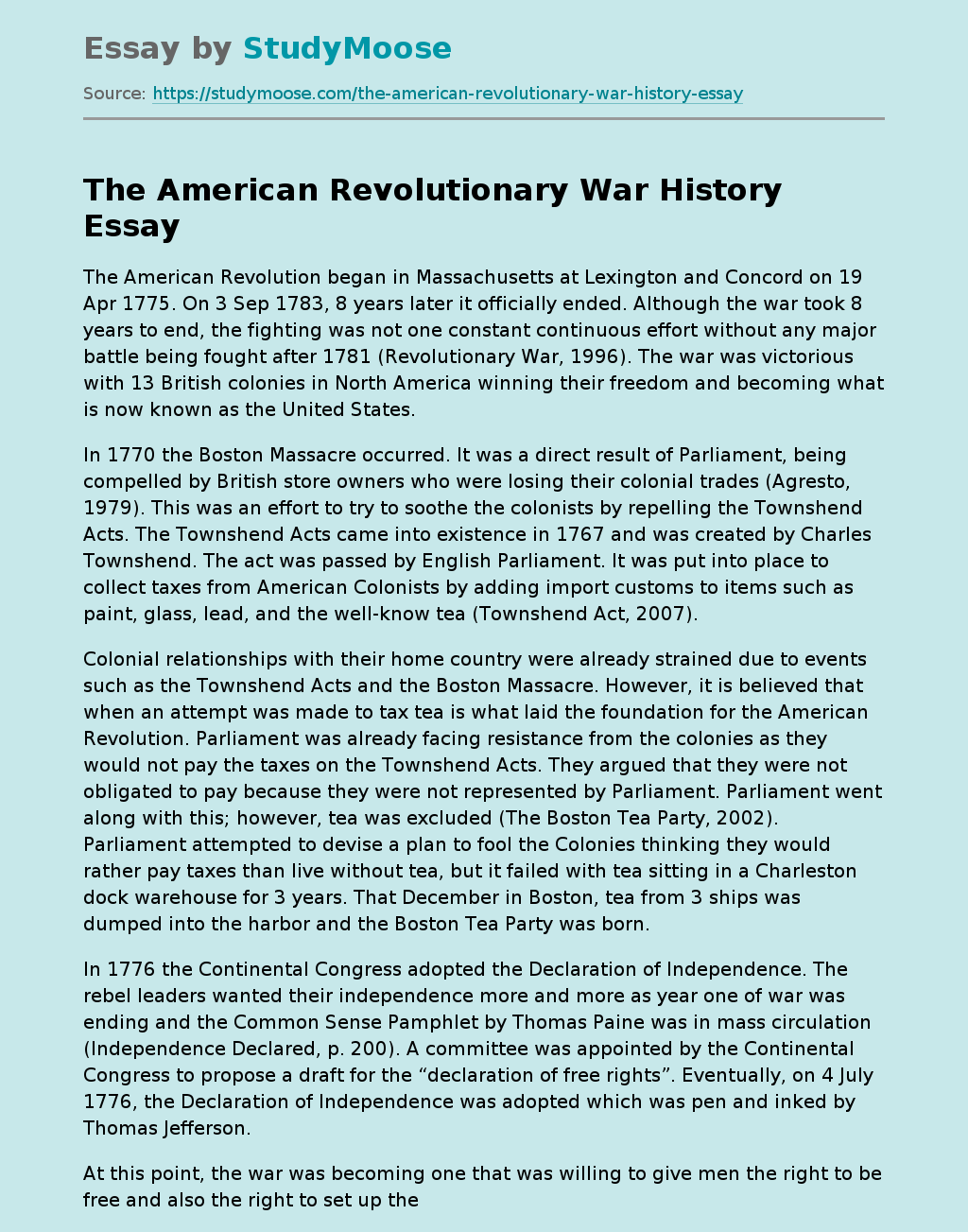