Who Fired First at Lexington and Concord?

The date is April 19, 1775 and the Revolutionary War has begun. Nevertheless, there is already another controversy. Who fired first at Lexington and Concord? An illustration of the Battle at Lexington and affidavits from American and British men can help solve this question.

The British fired first at Lexington because American troops were told to disperse and not have any sort of contact or fight with the British when they were sighted, Commander Parker’s and Lieutenant Gould’s affidavits are credible as they match with each other, and Sam Winship identified an officer who fired the first shot engaging Americans and British in warfare whereas John Barker’s affidavit of what happened in Lexington claims that Americans shot first but he could not identify who they actually were.

Don't use plagiarized sources. Get your custom essay on
“ Who Fired First at Lexington and Concord? ”
Get custom paper
NEW! smart matching with writer

According to John Parker, an American soldier, and his affidavit he ordered his troops to not be discovered by British troops and to not in any way converse with them if they approached.

Proficient in: Lexington and Concord

If they in anyway insulted or harassed the soldiers, Parker stated that his troops should just run away and to not engage in battle. He concluded with saying that while at Lexington, there were British troops that rushed furiously, fired upon, and killed 8 of his men without Parker or his troops even provoking them.

Edward Gould, a British soldier, and his affidavit can help strengthen the fact that the British fired first at Lexington. Although Gould did say that he didn’t know who shot first, he did say that at Lexington, his troops sighted Americans and rushed toward them previous to the firing.

These two affidavits imply that Gould’s troops had sighted Parker’s troops at Lexington. British fired first at Lexington while the American soldiers were told to disperse and the British ran after them to shoot them.

Who Fired First at Lexington and Concord?. (2016, Nov 19). Retrieved from https://studymoose.com/who-fired-first-at-lexington-and-concord-essay 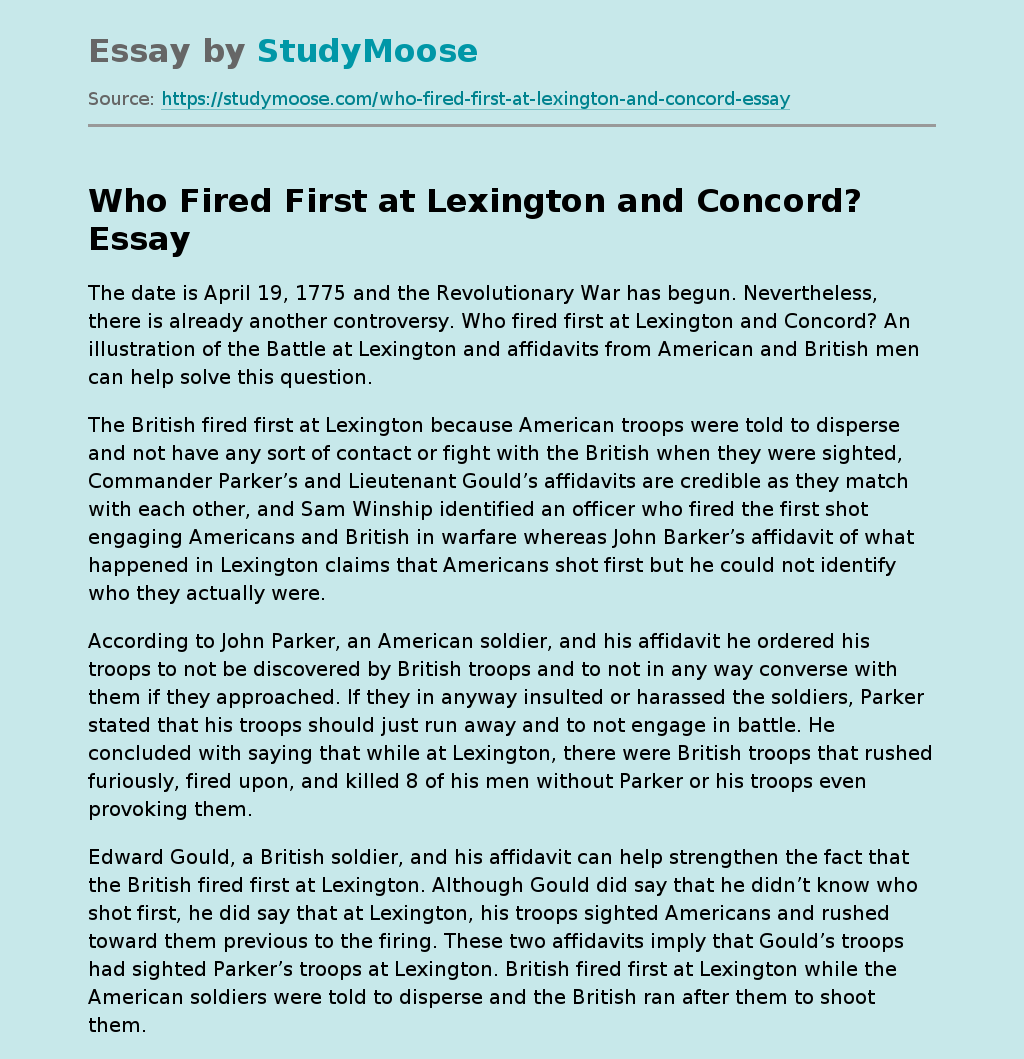