Stresses of Being a Celebrity

A woman signing herself “Wants the Truth in Wesetport” wrote to Ann Landers with a question she just had to have answered. “Please find out for sure,” she begged the columnist, “whether or not Oprah Winfrey has had a face-life. ” Fortunately for Ms. Winfrey’s privacy, Ann Landers refused to answer the question. But the incident was disturbing. How awful it would be to be a celebrity, always in the public eye. Celebrities lead very stressful lives, for no matter how glamorous or powerful they are, they have too little privacy, too much pressure, and no safety.

Don't use plagiarized sources.
Get Your Custom Essay on Stresses of Being a Celebrity Just from $13,9/Page

For one thing, celebrities don’t have the privacy an ordinary person has. The most personal details of their lives are splashed all over the front pages of the National Enquirer and the Globe so that bored supermarket shoppers can read about “Leonardo DiCaprio’s Awful Secret” or “The Heartbreak Behind Winona Ryder’s Smile. ” Even a celebrity’s family is hauled into the spotlight.

A teenage son’s arrest for pot possessions or a wife’s drinking problem becomes the subject of glaring headlines.

Photographers hound celebrities at their homes, in restaurants, and on the street, hoping to get a picture of Halle Berry in curlers or Jim Carrey guzzling a beer. When celebrities try to do the things that normal people do, like eat out or attend a football game, they run the risk of being interrupted by thoughtless autograph hounds or mobbed by aggressive fans. In addition to the loss of privacy, celebrities must cope with the constant pressure of having to look great and act right. Their physical appearance is always under observation.

Famous women, especially, suffer from the spotlight, drawing remarks like “She really looks old” or “Boy, has she put on weight. ” Unflattering pictures of celebrities are photographers’ prizes to be sold to the highest bidder; this increases the pressure on celebrities to look good at all times. Famous people are also under pressure to act calm and collected under any circumstances. Because they are constantly observed, they have no freedom to blow off team or to do something just a little crazy.

Most important, celebrities must deal with the stress of being in constant danger. The friendly grabs, hugs, and kisses of enthusiastic fans can quickly turn into uncontrolled assaults on a celebrity’s hair, clothes, and car. Most people agree that photographers bear some responsibility for the death of one of the leading celebrities of the 1990s -Princess Diana. Whether or not their pursuit cause the crash that took her life, it’s clear she was chased as aggressively as any escaped convict by bloodhounds. And celebrity can even lead to deliberately lethal attacks.

The attempt to kill Ronald Reagon and the murder of John Lennon came about because two unbalanced people became obsessed with these world-famous figures. Famous people must live with the fact that they are always fair game and never out of season. Some people dream of starring roles, their name in lights, and their picture on the cover of People magazine. But the cost is far too high. A famous person gives up private life, feels pressured to look and act certain ways all the time, and is never completely safe. An ordinary, calm life is far safer and sane than a life of fame.

Stresses of Being a Celebrity. (2016, Oct 29). Retrieved from https://studymoose.com/stresses-of-being-a-celebrity-essay 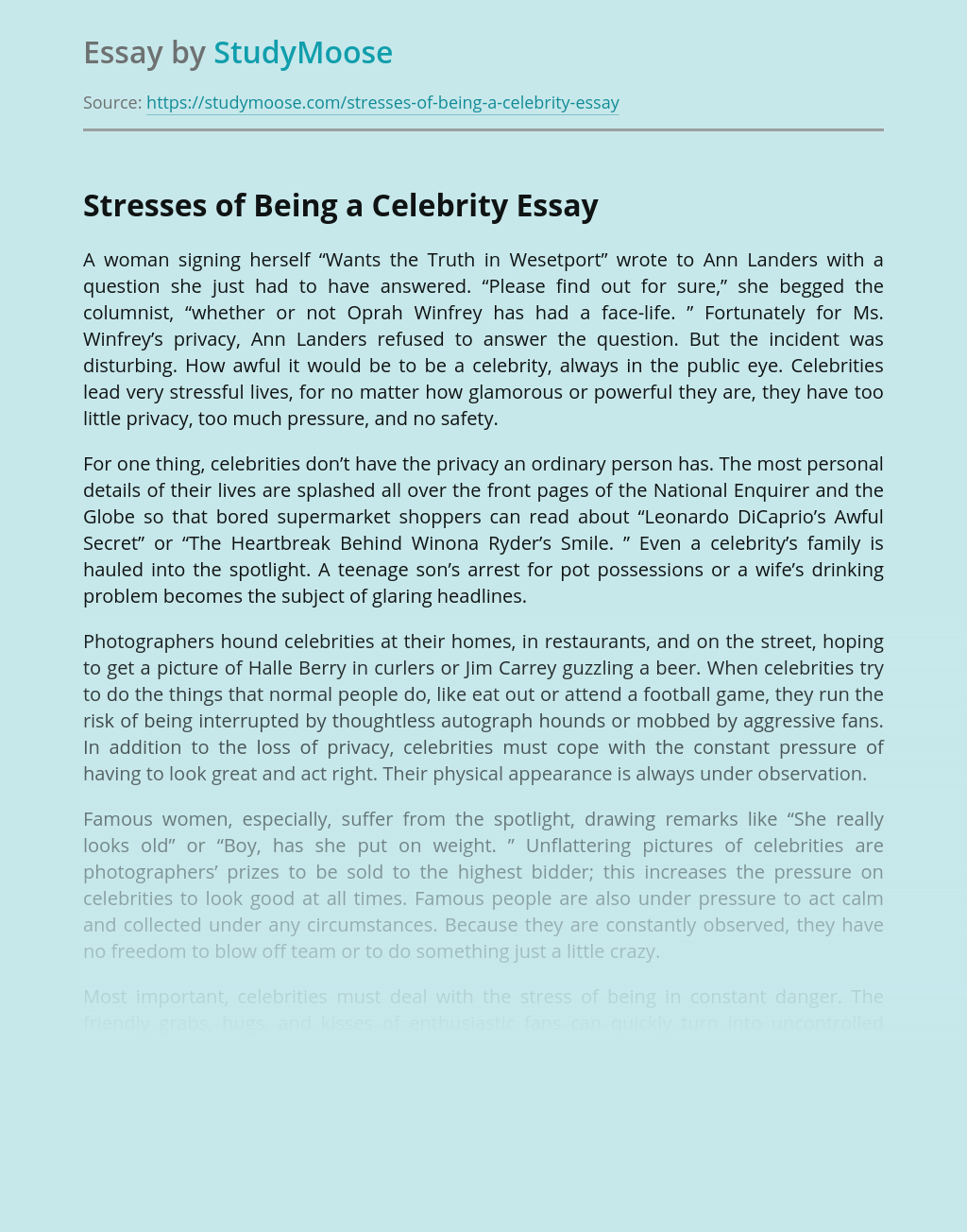 Do you believe star activism is a favorable or unfavorable thing? That’s the concern. To me, I believe celebrity advocacy has a really favorable result on society and need to end up being more popular. More stars must become activists since activists have a long effective history, celebrity activism helps draw attention to all different...

Get Essay
Being Famous

Almost everyone dream about being famous and popular. Most people would like to be admired and loved by others who surround them, but the price of fame is high. Let us consider advantages and disadvantages of being famous. To start with, celebrities are usually very wealthy people, who are able to allow themselves to have...

Oprah Winfrey was born in Kosciusko, Mississippi on January 29, 1954. Her name was supposed to be “Orpah” Winfrey, but the name was spelled wrong on her birth certificate, and pretty soon everyone was calling her Oprah. As her mom looked for a job in the North, Oprah lived her grandmother, who taught her to...

The Negative Effects of Winning the Lottery

In life, people have a tendency to ruin a good thing while it’s going. People become overwhelmed with the joy and fulfillment and begin to react irresponsible. For instance, a great thing such as winning can result into something horrible. Winning the lottery not only can bring happiness into someone’s life, but as well cause...