To begin with, stardom, fame, wealth and glory never comes alone. It brings a tremendous burden of standing mannerism and cautious attitude. Those who fail to do so, not only put into danger their position in people, but are also responsible for promoting negative trends in their followers. Hence I acknowledge the statement that the celebrities bear huge responsibilities to act as role models.

As we are living in a world of media today, it is not surprising that these celebrities remain in limelight and are chased everywhere by cameras.

Don't use plagiarized sources. Get your custom essay on
“ Celebrities Responsibility to Act as Role Models ”
Get custom paper
NEW! smart matching with writer

The most influence is done to the youth. The lavish, luxurious, colorfull and expansive lifestyles of these celebrities can inspire anyone who loves to dream. The young people, try to imitate them in clothing, hair style and even in walking and talking. At a certain level, this all remains bearable, however the problem occurs when young boys start to detto them in smoking, drinking and trying to do all other things in their favourite celebrities style.

Young people do not only imitate their outlook, but also start imagining the world from the eyes of these celebrities, instead of nurturing their own thoughts and ideas. Young women waste a wholesum of money in doing the same style of dressing and buying acessories, that are only a waste of time and money, however, very attractive for the businessmen. T-shirts with celebrities names and pictures are one of the examples. Young boys and girls imitate themselves to be Leonardo Dicaprio and Angelina Jolie or expect their spouses to act in the same manner.

This whole attitude of young people, brings a responsibility towards media and its people. As celebrities should know, that their foot prints are being followed with curiousity and greed, they should hold the symbols of honesty and welfare. It is often seen that interviews of these celebrities are read with keen interest by young people. Young boys and girls are eager to know the personal aims and attitudes of these people. They observe them closely and then imitate them in every instance of their life. The youth pay great attention to their advises. Even more than their parents, teachers and their well-wishers.

It is thus an immense liability of celebrities to act positively, not only in public but also in their private lives. They need to show trustworthiness and honesty. A small change in their attitude can affect much more than books and lectures of teachers and parents. We are living in an era, where media is the most powerful part of our lives. We often blindly follow the trends of not only clothing, but also the popular trends of thoughts and ideas, as spoken or shown on television. Hence the media people, that is the celebrities play an important role in making a positive impact on today’s youth.

Media Role Models Have a Huge Influence on Kids

By the time our kids are in middle school, they start to look to their peers for a sense of what’s socially acceptable or desirable. * Kids choose public personas as role models, but there are no guarantees that a star will stick to a lifestyle that kids can look up to – or that parents will approve of. Studies show a direct link between role models, advertising, and the effects that both have on our kids’ behavior. Celebrities use the Internet to communicate directly with their fans.

As parents, we have a natural instinct to choose who we want our kids to be friends with — and who we’d rather they not hang around. The same instinct kicks in for media role models. We like iCarly because she’s smart and kind. SpongeBob? Maybe not so much. In today’s 24/7 media environment, in which kids may be spending more time with media than they are with their parents, choosing positive role models is more important than ever. At Common Sense, we often refer to media as “the other parent” — that’s how much influence it has in your kids’ lives. Role models matter. Help your kids find good ones.

You don’t have to look much farther than the Ariel costume in your daughter’s closet or the light saber in your son’s toy box to know that kids emulate their favorite characters. By the time our kids are in middle school, they start to look to their peers for a sense of what’s socially acceptable or desirable. Parents may remain the primary influence in their kids’ lives, but the competition starts to get fierce at this age. This separation is entirely age appropriate. But when the media comes into play, the values you want to pass down to your kids may be competing against, say, Homer Simpson’s.

Our kids’ media environment goes way beyond television. Influencers reach out to kids via YouTube, video games, Twitter, and music — all of which are broadcast or easily accessible 24 hours a day. And as we all know, not all the characters or people who gain popularity through these channels have stellar role model credentials. Smoking is a perfect example of how media stars make things look cool. Studies show that exposure to pro-tobacco marketing and smoking in the media more than doubles the odds that kids will start smoking.

And half of kids who start smoking say they do so because they saw someone they looked up to smoking in the movies. The good news is that there are plenty of positive role models you can point to that may influence your kids to make healthy choices, learn to respect others, achieve goals, and avoid anti-social behavior. Negative role models — especially ones who don’t suffer consequences for their actions — can encourage anti-social behavior, stereotypes, and even cruelty.

Why We Need Role Models

I think it is an innate characteristic of human beings to look up to others and make them their role models. As children, we tend to put the people closest to us on pedestals. Our moms – or dads, for that matter – take on superhuman aspects and, usually, become our first role models. As we grow older, our elder siblings may become the ones we look up to. If that doesn’t happen, there is always the cousin who seems to have it all together. Or there is the cool kid in the neighborhood. Of course, there is also the celebrity that seems to have a god-like status, especially for teenagers. And with the way media is consumed these days, even adults have their own celebrity role models. Why do we have this seemingly innate need for role models?

I am no psychologist, but it is rather understandable that every person has this need to make himself a better person. There are a lot of different aspects that one may want some improvement on, but the bottom line is the same: we want to be better. And what better way to get to our goals than to find people who embody the traits and characteristics that we want for ourselves? Good Celebrity Role Models Exist!

Going back to celebrities and role models. I would have to admit that having a celebrity as a role model may not be the best idea. After all, don’t celebrities have so many negative things going for them? Think diva attitude. Think rock star lifestyle. Think loose morals. These are common labels attributed to many celebrities, and in some cases, they are justified. However, we have to remember that these celebrities are people as well. While some of them are definitely not fit to be role models – for children, teenagers, and adults alike – there ARE celebrities who fit the bill perfectly! This hub takes a look at a handful of celebrities who make good role models. Yes, they do exist! 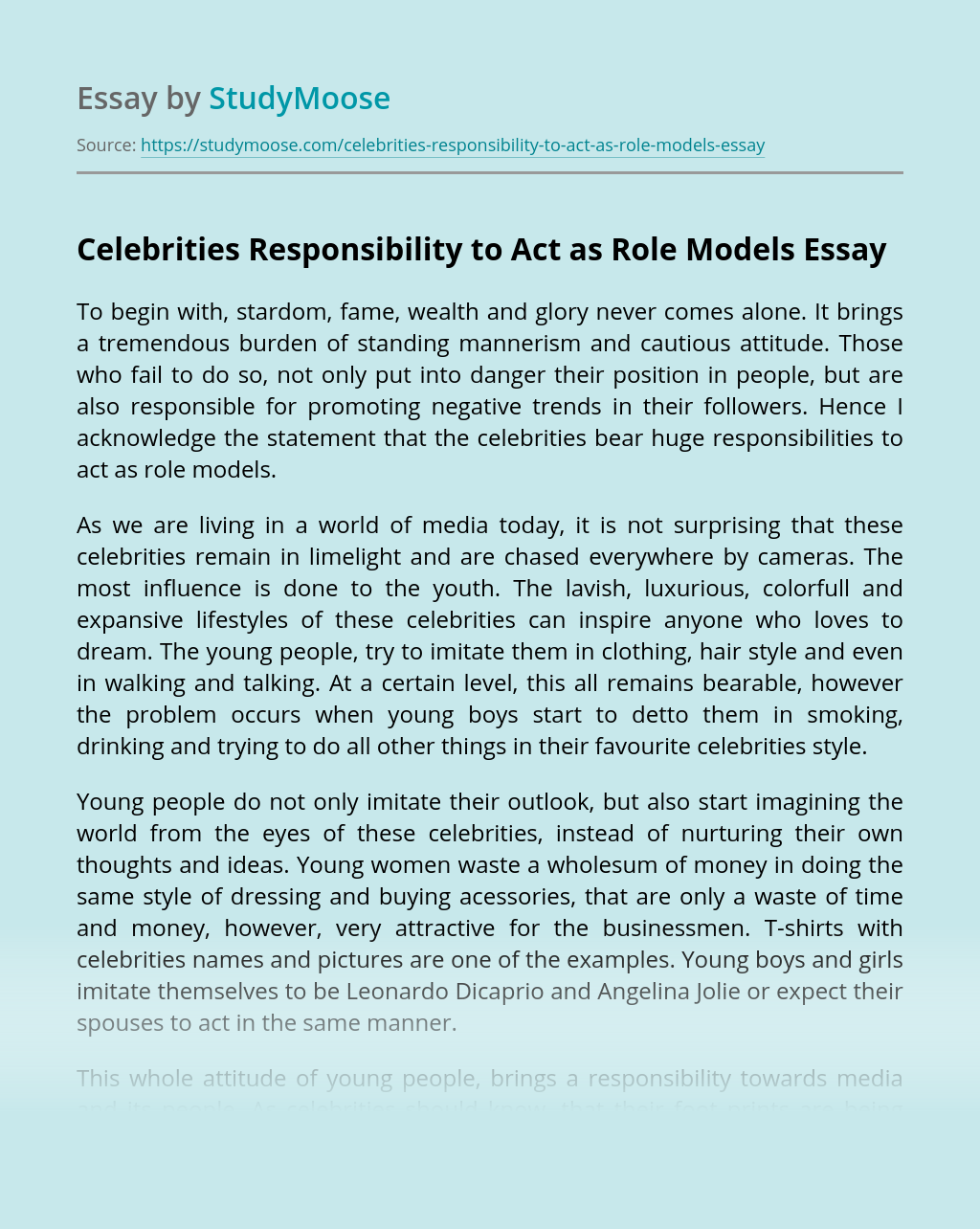