History of Burj Al Arab and Its Famous Encounter

The History of the Hotel The Burj Al Arab is one of the most luxurious hotels in Asia. Located in Dubai, United Arab Emirates, the name is in Arabic that means “Tower of the Arabs”. The Burj is managed by the Jumeirah Group and built by Said Khalil. It was designed by Tom Wright of WS Atkins PLC. It is the tallest building used exclusively as a hotel. (321 metres/1,053 ft). The Burj Al Arab stands on an artificial island 280 metres (919 ft) out from Jumeirah beach.

Don't use plagiarized sources. Get your custom essay on
“ History of Burj Al Arab and Its Famous Encounter ”
Get custom paper
NEW! smart matching with writer

It is connected to the mainland by a private curving bridge.

The Burj has become the international symbol for Dubai and is also be regarded as The World‘s Most Luxurious Hotel. The construction of Burj Al Arab began in 1994 and opened in December 1999. It was built to resemble the sail of a dhow, a type of Arabian vessel. The architect and engineering consult for the project was Atkins (UK’s largest multidisciplinary consultancy). The hotel was built by South African construction contractor Murray & Roberts.

Due to the exclusiveness of Burj Al Arab, many celebrities and well-known name have come and visited this hotel. Some of these famous persons are: 1. Tiger Woods – This famous pro golfer practice his tee shot at the Sheikh’s Helicopter Pad, on top of the building. 2. Andre Agassi and Roger Federer – In the preparation for the Dubai Duty Free Men’s Open, tennis legend, Andre Agassi and the world No. 1, Roger Federer, could not resist the temptation to have a friendly knock about on the world’s highest tennis court, the helipad of Burj Al Arab.

Michael Jackson – He was there purely for the Spicy Buffalo Wings when he visited the hotel in 2005. He was there with his buddies Mohammed Bin Sulayem (UAE’s champion rally driver) and Sheikh Abdulla Bin Hamad Al Khalifa (now the King of Bahrain). The pair was accompanying Michael Jackson while he toured around Dubai. Appendix Figure 1: Tiger Woods practicing his tee shot. Figure 2: Tennis court lay atop the same helipad

History of Burj Al Arab and Its Famous Encounter. (2018, Aug 25). Retrieved from https://studymoose.com/history-of-burj-al-arab-and-its-famous-encounter-essay 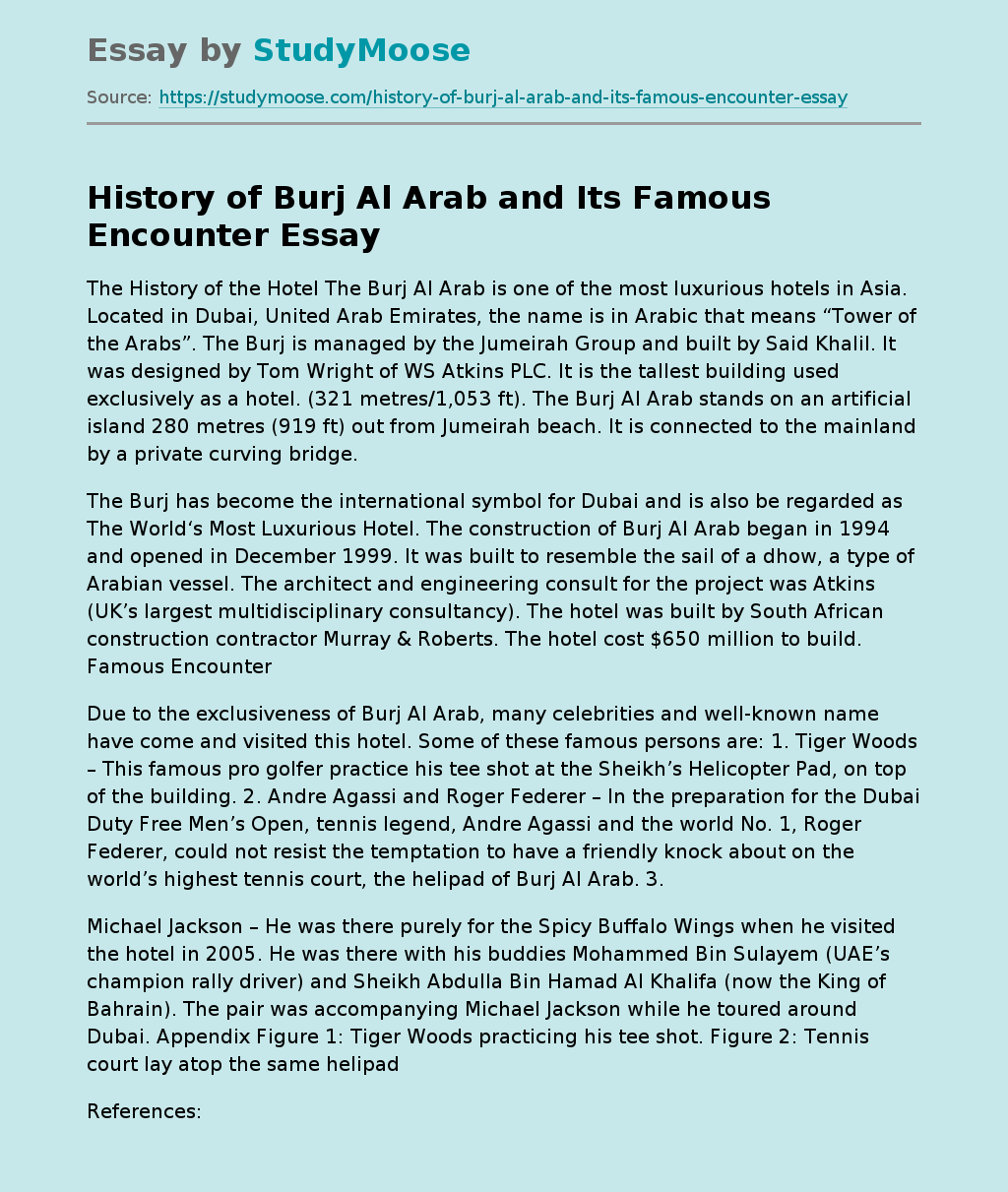