Nowadays, there are many skyscrapers in the Middle East that are built after the remarkable development in the region. The most famous urban city in the Middle East is Dubai which has lots and lots of beautiful buildings. Burj Al Arab and Burj Khalifa are most popular skyscrapers in Dubai. They have some similarities but they have many more differences in their backgrounds, and the constructions.

Burj Al Arab has a modern design and several qualities that make it a unique skyscraper.

Don't use plagiarized sources. Get your custom essay on
“ Burj Al Arab and Burj Khalifa ”
Get custom paper
NEW! smart matching with writer

Burj Al Arab is located in Dubai, United Arab Emirates. It was built in 1999, designed by Tom Wright at Atkins, and cost 650 million dollars. Inside the construction there are hotels, restaurants, and a shopping mall. The building consists of 60 floors. Moreover, the dimensions of the skyscraper are built to a give specific curved shape, so its area is 309,473 m2 and its height is 1,056 feet.

Burj Khalifa was built to be taller than Burj Al Arab, and to be the tallest and the most striking skyscraper in the world.

It is located in Dubai, United Arab Emirates near Burj Al Arab.

Burj Khalifa is younger than Burj Al Arab; it was built in 2010, designed by Adrain Smith at SOM and cost 1.5 billion dollars. Inside the construction there are hotels, restaurants, and a shopping mall like Burj Al Arab, but they are more expansive. There are 206 floors in the tower. In addition, the designer focused to make the construction has the tallest height in the world. It is 2,722 feet high and its area is 526,760 m2, so it is much bigger and taller than Burj Al Arab.

All in all, Burj Al Arab and Burj Khalifa are great places to visit. they are very attractive and bewitching even though they have lots of differences and few similarities. Anyway, the beauty always comes from differences. So, the designers had to make differences in these two skyscrapers to be unique and beautiful as possible as they could. 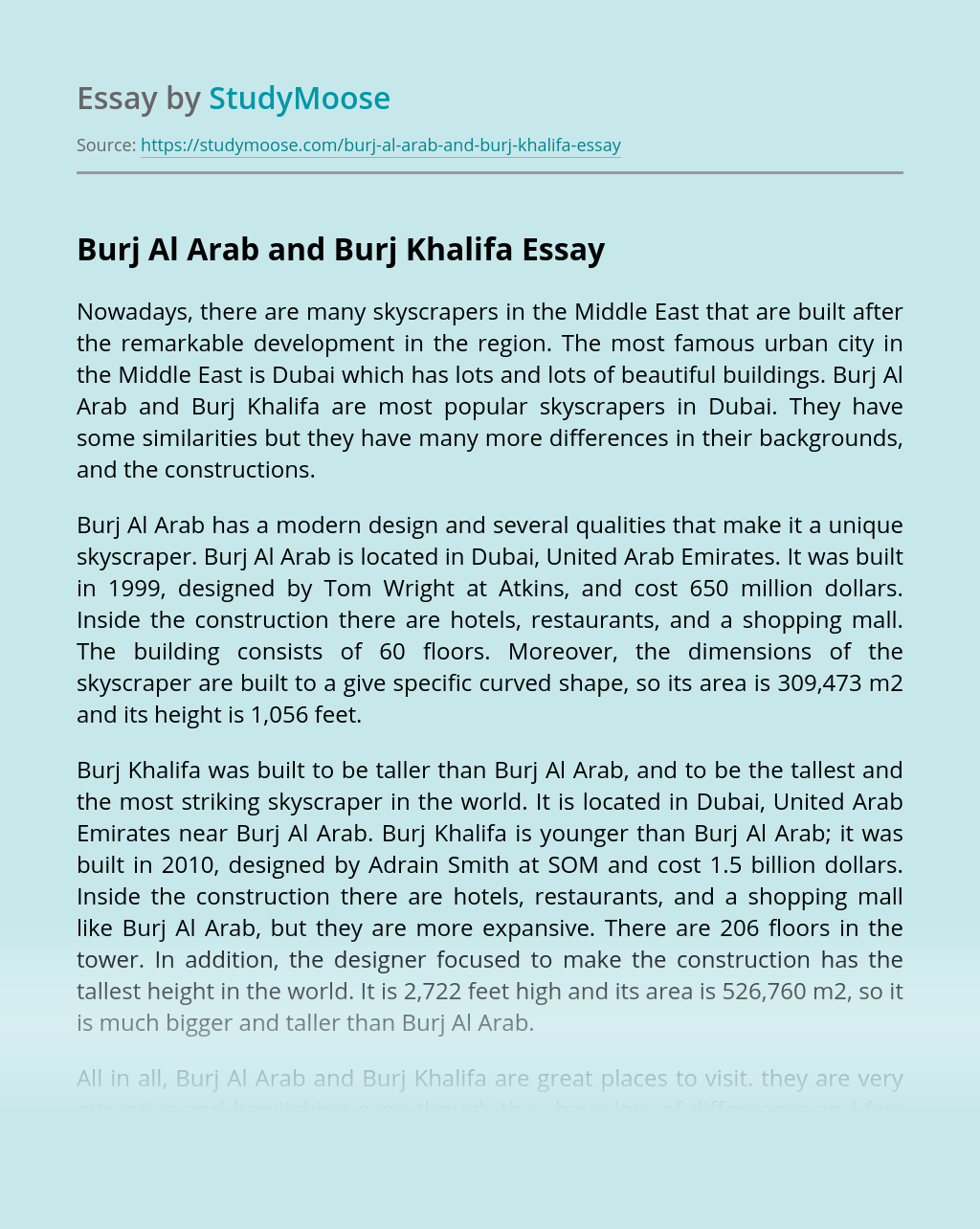