It was a dark and thunderous night when returning home from my girlfriend’s house in Westville. Most of the way had clearly lit streets, until I got to the junction of Buttercup Lane and Meadow Street. I had a choice of taking a short cut through my local park, or walking around it, which would add a further mile to my journey. It was getting late, so I decided to take the short cut.

The park was always dark with little or no illumination, except for the light given from the moon and the stars.

Don't use plagiarized sources.
Get Your Custom Essay on Strange encounters Just from $13,9/Page

But that night was unusually different, the sky swirled with grey and charcoal clouds, and the wind blew through the trees with such vigour, that their branches appeared to cradle and whisper to each other.

As I walked through the park, I looked at the border near the small pond where plenty of pretty pansies had been planted, they where delightfully simmering in the wind like miniature ballerinas.

Continuing on, I noticed a slight glowing object in the sky above; at that time, I thought nothing of it, thinking it was one of the brighter stars shining through. Nevertheless, it continued to catch my eye as I walked.

Suddenly, the small glowing object got bigger and brighter, not only that, it was heading in my direction! I started to get an uneasy feeling and decided to walk a little faster in the hope of getting out of the park, before it came any closer.

Unfortunately, the object was moving too fast, and before long, I saw it fall to the ground, two hundred meters ahead of me. I got so frightened; my blood seemed to drain from my entire body. I stood perfectly still, like some cold, bronze statue.

Nervously and warily, I pondered whether I should carry on or retrace my steps back out of the park; I quickly gathered my thoughts and decided to go back. As I continued back out of the park, I glanced over my shoulder every couple of steps to see what it was doing, suddenly, the glowing object disappeared! I stopped with apprehension and wondered were it had gone, but to my horror, I turned around and it had materialized again one hundred meters in front of me!

Breathless and shaking with apprehension, I slowly carried on walking towards it, until I was about ten meters away, when I suddenly I froze. I stared at this football-sized object for about a minute or two, and then I heard a hissing noise coming from it.

My eyes became mesmerised by the object and as I watched, I could see a segment of the object starting to open… As it did, it expelled a putrid smelling scarlet steamy cloud.

I began to notice what looked like, multiple antennae slowly protruding out of the opening like a hermit crab climbing out of its shell; my mind became blank as to what it could be, when they suddenly emerged fully.

They resembled some kind of spider-like creatures, red in colour, but instead of the usual eight legs, they only had six.

The spiders ominously climbed out of the object and started to move towards me, I stood as stiff as a board with overwhelming fear, only to be let down by the pounding of my heart, as it tried to leap from my chest. Then they suddenly stopped. One of the creatures ventured towards me.

Two small menacing red lights glowed at me; I assumed they were its eyes. I started to tremble at this point, and asked in a low voice, “what are you?” Nothing happened for a moment or two, and then I heard a voice. At first I felt somewhat relieved that someone else was in the park beside me, I looked around but could see no one. I turned back towards the ‘spider’ and was amazed that its red menacing eyes glowed brighter as the voices grew louder.

It was at this point that I realized the spider had some telepathic abilities and was attempting to communicate with me.

Frightened and scared, I asked what it wanted and it replied, “Do not be afraid. We are on a fact-finding mission from the planet Mars and mean you no harm.”

I asked what kind of mission it was, it replied that they wanted to know what type of beings we were, and the types of technologies we had that enabled us to send rockets and machinery to it’s home planet.

The spiders explained that they were a little concerned about our intentions for their home, and came to find out whether we intended any hostility towards them, or if we were just curious about their planet.

I briefly explained how our race lived, and how, as human beings, we were born to explore and seek out new life forms, which enabled us to understand the world we live in.

The spider, still concerned about our intentions asked if it could scan my body for biological analysis, as this would establish whether we could contaminate their race.

I wondered if the scan could harm me. Again, they telepathically replied, “No harm will come to you.” I reluctantly agreed with their request.

Before the scanning commenced, it told me that it could also project mental imagery of their own way of life on Mars, intrigued, I requested it to show me how.

I began noticing a large white cloud coming out of its small orbital ship, which enveloped my entire body. Although I could immediately see nothing in the cloud, my lips started to tingle with electrically charged particles, similar to the sucking of a sherbet sweet, then like some kind of projector activating, I started to see visions of their world.

I noticed that like humans, they also cared for their offspring with the same kind of loving affection as we do, which gave me a comforting feeling during their scan.

After the scanning was complete, they thanked me and said they would have to do further studies in other parts of the world.

The spiders then re-entered the small orbital sphere, and elevated into the night skies where it vanished. I hurriedly continued through the park and was relieved to be on well-lit streets again.

The ordeal had left me drained of emotions, but I was still astonished and amazed by the events that had happened, so much so, I could not tell anyone about the incident in-case they thought I was going mad. 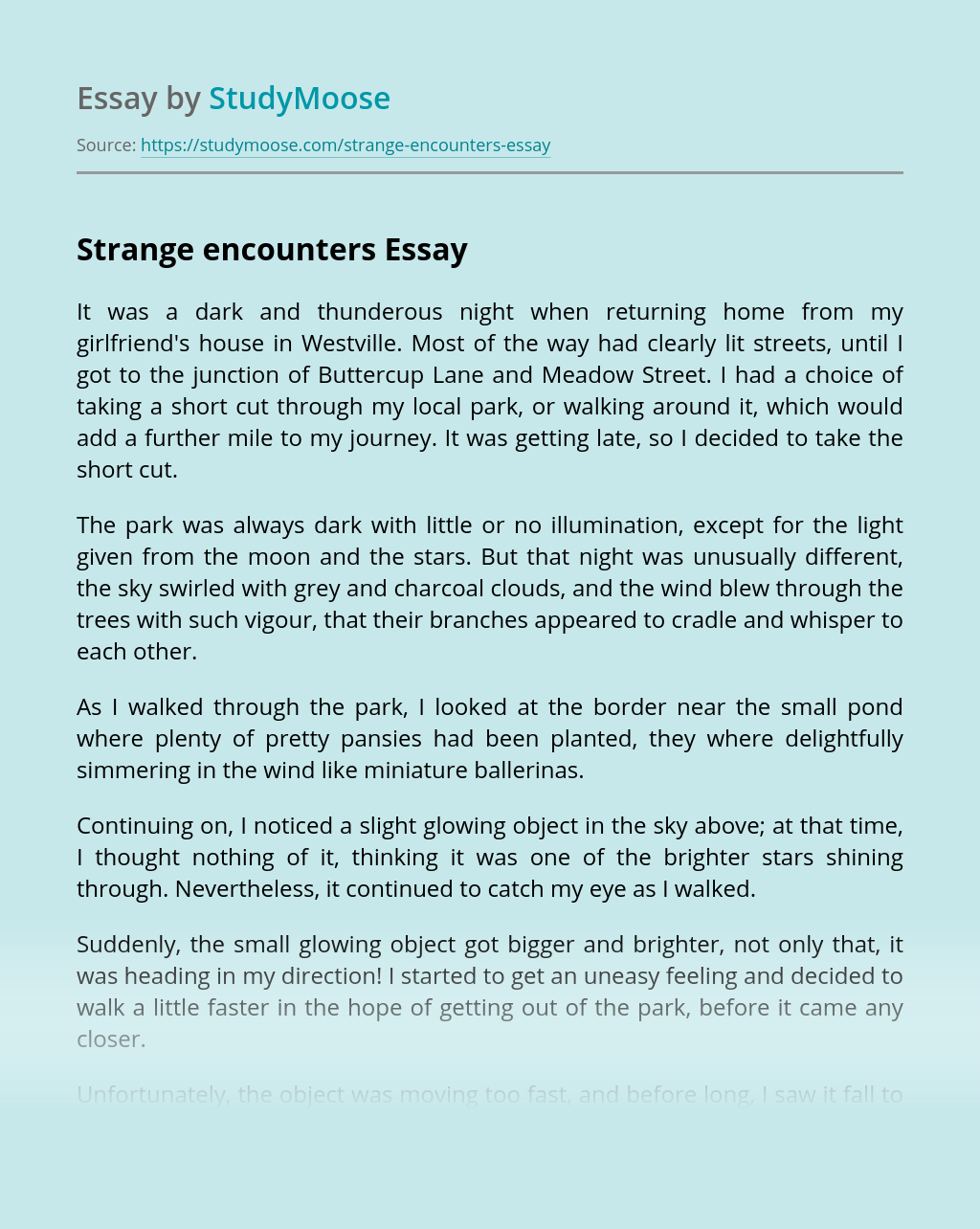 1. Identify the ethical and legal issues of which Albert needs to be aware. a. Barry putting Albert or Mary’s trade before the client order, this is called spinning and is considered unethical. And you have Barry demanding insider information on several companies b. Hostile Takeover, the union would do everything in its power to...

The researcher will try to expose that feelings are not shown with words but with actions. No one can deny that true love between a father and a daughter is something really wonderful. In King Lear, the King’s youngest daughter, Cordelia, gives us the real meaning of love from daughter to a father. The reader...

Health Care Services Recommend How Ambulatory Services Should Be Funded There are many businesses like ambulance services that are private. Their fees are collected by the person that is using the service to be transported to the doctor or the use of their insurance they use to assist with their services. The community also provides...

Type 1 diabetes is a lifelong (chronic) disease in which there are high levels of sugar (glucose) in the blood. See also: Diabetes Gestational diabetes Type 2 diabetes Causes Type 1 diabetes can occur at any age. However, it is most often diagnosed in children, adolescents, or young adults. Insulin is a hormone produced by...

Life Before the Internet and After

Life was much more difficult before people had the internet in the home to help them with studying, looking information up, working, and entertainment. Without the internet doing all of that was hard. Things then were slow, a really hard task now could take an hour by internet. Such as contacting Saudi Arabia from U.S...