There’s a few explorers, a few countries, and a whole lot of effort that got America started many years ago. From tribes of buffalo hunters, to civil wars, to a world of technology here today, America has gone through many stages, many battles, and many different leaders. At the end of the day the most important years have been the age of colonization in America. If it weren’t for Columbus to Ponce de Leon, we wouldn’t be where we are today.

Don't use plagiarized sources.
Get Your Custom Essay on Spanish, French, and English Colonization in America Just from $13,9/Page

There would have been no Washington and no Obama.

It is thanks to the details that we have the country that we do today and there were three different countries who got us where we are. Spain, France and England supplied men with a desire for discovery and new land, and supplied them with the necessities to fulfill an explorers most crucial discovery. All three countries went about this in many different ways as well as so many common reasons.

Different leaders, different ships, different intentions, and different lifestyles were all factors included in the colonization of America.

The one thing that , and England had in common though was their reason for exploration. They might have differed on styles, religious views, and routes that separated them so much yet at the end of the day all they had on their mind was greed. These three countries came for empire building and ownership of colonies and that‘s what they would get. The Spanish were the first of the three to arrive at America. Although the Native Americans had already been living there for years, the Spanish set the mark for the Europeans.

The exploration began back in the 1400’s and differed from French and England in the sense that Christopher Columbus wasn’t asked and forced to go find more land for his people only for power purposes, but Columbus went on an exploration to spread the word of Christianity. “…As “a people very deficient in everything,” the Tainos would now receive the benefits of Christianity, Spanish rule, and European civilization, whether they wanted these things or not. ” ( Boyer pg. 24). Columbus shared something in common with France and England.

Besides spreading religion and looking to convert others into Christianity, like the others he saw America as an opportunity to conquer land and take over. “Columbus’s landfall at Guanahani marked not only Europe’s discovery of America but also a critical step in the formation of an Atlantic power. ” (Boyer pg. 24). Along with the conquest of land, came slavery, trading, and the Columbian exchange. “The Columbian Exchange was shaped by the efforts of several European nations to increase their wealth and power by controlling the land and labor of non-Europeans they considered uncivilized. ” (Boyer pg. 4).

Columbus got excited at the idea of gold in the America’s, as Cortes later continues this tradition, and he made sure to put that on his to do list during the colonization of America. Overall, Spain set a mark and a territory in the subjects of religion, gold, slavery, and land. They were at the top of their exploration for the next few years. Next in line to discover America was France. Only a few years ahead of England, France landed their discovery in 1524. France was different in the sense that this time it was an order from King Francis I to Giovanni de Verrazano to go on this exploration.

Verrazano traveled from the North American coast from the Carolinas to Newfoundland. The French had good and both encounters with the Native Americans right away. Jaques Cartier began an exploration himself where he explored Newfoundland, Nova Scotia, Quebec, and sailed the St. Lawrence river near Montreal. “Nova Scotia and the St. Lawrence River valley were the French’s two most important North American outposts. “ (Thwaites pg. 1). Just like Spain the French went straight into the trading business and had a want for more beyond their home country. Also like Spain, the French were greedy. Faith and fortune were the primary reasons for French involvement along the St. Lawrence. ” ( Thwaites pg. 1).

To them America was definitely an opportunity for gold and land, but the French soon failed. Something the French and Spanish definitely had in common was that they didn’t like each other. They went into war over land rights and even when the French tried to recover by colonizing Jacksonville, Florida, the Spanish soon ended that as well. France deals with many disputes during their colonization period such as dealing with Spain, the competition of trading, and the battle at Lake Champlain.

Their impact on the colonial period ended with them supplying Native Americans with goods, and ownership of mostly Canada in the end. Lastly, England begins to play their part in the colonization of America. England’s journey began back in 1558 with Queen Elizabeth I in charge at the time. England had similarities to both Spain and France, but overall was the more independent and strongest of the three. England went through their disputes and long time rivalry with Spain, the battle of Christianity vs.

Catholicism, the death of Queen Elizabeth, the colonizing of Virginia, and the battles with the Indians, head on. England was definitely the most advanced and hard headed. They did things such as convert all to Christianity, won a victory over the Armada, and colonized Virginia, New England, and New Netherland. The English were similar to Spain and France in the sense that they too made the Native American’s their slaves. When England colonized Virginia they had a lot of issues financially and politically and this was partially due to the fact that the English felt superior to a lot of the world. The Virginia Company of London barely avoided a similar failure.

Its first expedition included many gentleman who, considering themselves above manual work, expected Native Americans to feed them and riches to fall into their laps. ” (Boyer pg. 47). England did go through their ups and downs like Spain and France as well though. They went on to successfully get Jamestown, Virginia going, but soon after had to battle the Sagadahoc. After Virginia dealing with military rule debates and going bankrupt, England went on the colonize New England.

They also went on to sail the Mayflower to what they established as Plymouth colony as well as obtaining Englishman, but Dutch sailor for a while, Henry Hudson as a sailor of theirs. I would say overall that England had the biggest influence on the final wrap ups of colonizing America due to how much they really went through. Whether it was religious issues or money issues England fought a hard battle and put a strong fight in the greedy competition with Spain and France. In conclusion, Spain, France, and England all played a big part in the colonization of America.

Without all three of these countries, all of the explorers, and all of the bold moves made, America would not be here today. From Columbus to Hudson, from gold to Indian wars, and from Spanish to French to English, America advanced and changed it’s life styles in so many ways. Spain spread religion, searched for gold and obtained land. The French created huge trading posts, sold fur hats, and obtained much of Canada. England colonized many places, made peace with the Spanish, and overall covered a lot of ground. Together these three countries were so much apart, so different, yet so much alike. Spain, France, and England came and conquered. 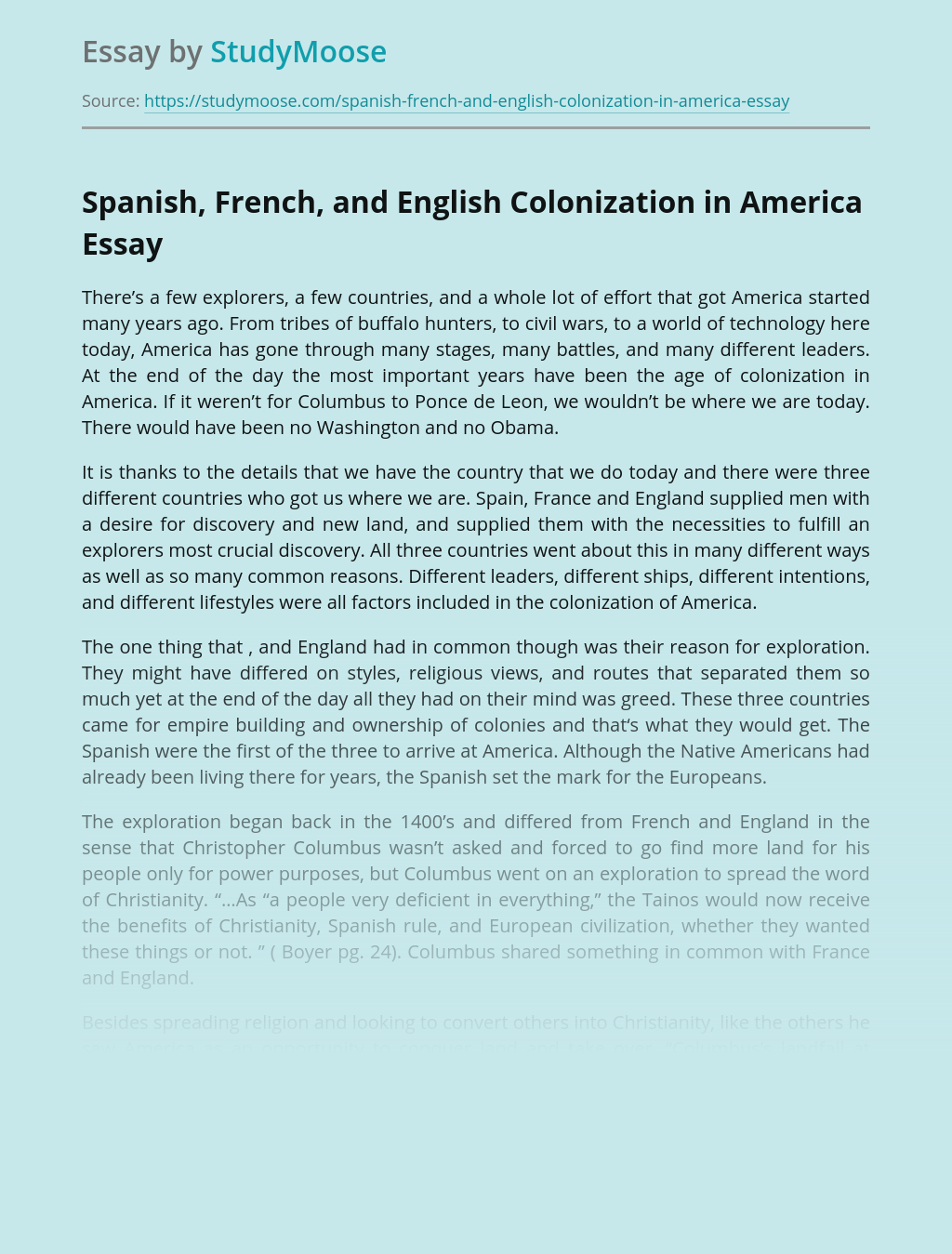 Purpose of Colonization and Colonial Modernity

Colonization is the process through which one nation asserts its sovereignty over another for the following reasons. This process is both a mental and physical process that affects both the colonizer and the colonized. The first reason mentioned here for a nation to pursue a policy of colonialism is economic incentive. The imperial state could...

Throughout history, countries have expanded their empires to create the largest and most powerful on the globe. Napoleon and Alexander the Great had two of the most controlling empires ever created, and Great Britain’s in the early 1800’s was another of the best. During this time, many empires started expanding to make greater and more...

Get Essay
Many Headed Hydra Summary

Chapter 1 Summary for The Many Headed Hydra The chapter tells the story of the wreckage of the Sea-Venture off Bermuda in 1609. The people of the shipped was welcomed by a land that contains both water and abundant of food. Being that they were suppose to be new reinforcements for the plantation for the...

The Effect of Colonialism in V.S Naipaul’s Miguel Street

“The man is so colonized that he abandons his native Trinidadian identity” (Beck, 2002). Although pertaining to the character B. Wordsworth, in V.S. Naipaul’s Miguel Street, this quote can be used to describe the very meaning of the book itself. It can be used to provide a clear picture of what was happening in British...