Qoutes about spain
“Barcelona are my favorite team in Spain, let’s put it that way.” – Frank Lampard “In the last 1,000 years, the Arabs have translated as many books as Spain translates in just one year.” – Larry Elder

“It’s like a dream to come to Spain and stay for a couple of years and get somebody to teach me Spanish music.” – Lenny Kravitz

Introduction
I choose to write about the Spain for our English A course project work because the country has always interested me due to its beautiful soccer and spectral climate.

Don't use plagiarized sources. Get your custom essay on
“ A country I like to visit – Spain ”
Get custom paper
NEW! smart matching with writer

I would rather call Spain the country of soccer, since two of the world’s best soccer teams are there; Barcelona and Real Madrid. But there is more to it; the summer of course. Travel to Spain would be a great experience for me since I have heard a lot about the country from friends and seen amazing pictures.

Besides the soccer, the country climate is one of the reasons I’d like to visit Spain for. They have a subtropical climate with wild winters and beautiful summers. Through this project work my knowledge will increase about this country, and the subjects I will bring up will be:

Quick fact
Spain is a constitutional monarchy and is officially called the Kingdom of Spain.

The country’s capital is Madrid and Barcelona comes in as the second largest city in the country. The country is located in the Liberian Peninsula in southwestern Europe. The name Spain comes from the Roman name for Hispania.

National Day is 12th October.
The official language is Spanish.
Spain’s economy is the 7th largest in the world.
Spain is the main tourist destinations for Swedes (nearly 1 million passengers every year) and about 65 000 Swedish people living in the country. There are high mountains such as the Sierra Nevada and the Pyrenees, the highest point in Spain’s Teide on Tenerife and is 3,718 meters above sea level.

Spain is one of the countries that contain mostly mountains in Europe. The mountain chains Pyrenees and the Sierra Nevada is dominant in the northeastern and southern parts of the country, while the Cantabrian Mountain rises 2500 meters above sea level in the north. There is a high plain in the middle of the country with almost no trees, poor soils and a harsh climate. The highlands are surrounded by valleys, in many places formed by the rivers Ebro and Guadalquivir. The beach areas of north and along with south are grasslands. The heights matters between its regions which decide the climatic variations. The northern coast has a typical Atlantic climate, while further south is much warmer. In the central surroundings, it may be up to 40 degrees in summer and far colder than the rest of the country during the winter months. Nature disasters and fire from the hot temperature during the summer threatens the large forested areas in the country and the authorities have carried out growing programs to save the forests.

Spain is usually split in different climatic zones – the Mediterranean coast, the northern Atlantic coast and the Canary Islands. The area around the Mediterranean Sea has mild winters and a subtropical climate and high rainfall during spring and fall. The Atlantic coast has quite a lot of precipitation, even in winter, and calm summers. The Canary Islands have a subtropical climate, with fine and mild weather with temperatures between 18-24 degrees all year. The northern regions are cool and tropical, but the central plateau is cold in the winter and hot in the summer, Barcelona is a city located in this climate zone. Madrid has a winter average of 8°C and a summer average of 23°C. In the southern regions the climate is comfortable except in the summer.

The Phoenicians and Carthaginians ruled Spain until the year, 200 BC, when the Romans conquered the area and founded the province of Hispania. When the Roman Empire went under the 400-century, Spain fell under different rulers, before the country was conquered by Arab forces, and was under Bagdad Khalifas of 700’s. In the following centuries the Arabic Spain was advanced to a cultural, technical and economic center in southern Europe. In 1200s the Arabs lost control of Spain and was forced to the south and Spain was divided into several territories like today which later end of the 1400’s they counted as a single kingdom. Christopher Columbus’ trips to South and Central America made these areas belong into the Spanish Empire, later grew into the strongest in the West. During the 1500 – and 1600’s, when Spain experienced economic collapse and with population decreasing, a lot of people moved to the colonies in South America, which became more and more independent. In the 1800s Spain lost all its major colonies in South America and reduced back to an irrelevant European state. After years of dictatorship, the civil war exploded in 1936, a war that was won by the forces of the fascist Francisco Franco, who ruled the country with a strong hand until his death in 1975. With this history Spain has developed into an important country in the European and global politics and trade.

Spain’s GDP is around $ 11,200 per capital.
Spain’s currency is the Euro. 1 Euro is almost 9 Swedish Kr. The country’s economy depends mostly on tourism; it gets more than 70 million visitors per year. Ever since Spain joined the EU, there has been much better for them economically.

Spain is the fifth most populated country in Europe, and the third largest country in Europe. Throughout Spain, there are nearly 46 million citizens.
There are about 500 million people who mastered the Spanish language in the world. The majority of the population of Spain lives on the coast.
80% of the population lives in cities such as Madrid, Barcelona, Valencia and Sevilla. It is expected that the normal lifespan of men is about 73 years, and among women 83 years.

Almost 1.5 million Spanish citizens live in poorness in Spain and that more than half of the poor people are less than 25 years old, most of them on the border to Portugal. There are about 15 million families were there the adults does not have a job.

Spain is a constitutional monarchy and parliamentary democracy. Elections are held every four years. Parliament has two chambers: the Chamber of Deputies and the Senate. The country is divided into 17 self-governing regions, with varying degrees of independent and their own regional parliaments and governments. The Constitution introduced 1978th that Spain is a member of the EU and NATO. Spain’s current politic is more like the Swedish one; with prime minister and the king as head of state. Much of Spain’s current politics was formed by the fact that Spain was a dictatorship until 1975. Franco named Juan Carlos as Head of State 1969. Juan Carlos started the voting for democratic process of Spain after Franco’s death, and among the very first thing he did was to call a general election. Spain’s current government José Luis Rodríguez Zapatero major tasks now compromises with Catalonia and the peace negotiations with ETA / Batasuna.

Fernando Torres is a Spanish soccer player who have been playing English club Chelsea in the Premier League since 2011. Torres became historical when he became the youngest ever to play an A team game for Atlético Madrid and also the youngest to be appointed as captain when he was 19 years old.

Barcelona is one of the most popular cities. It has an active nightlife, wonderful climate and spectacular soccer. Barcelona attracts people from all over the world and has become known as one of Europe’s largest entertainment cities. Tourist can visit museums and explore the bars in the center. And if you’re interested in historical buildings you can visit Madrid, which offers many beautiful buildings created in the past.

Bull Fighting: An honorable sport, it was introduced by Gonzalo Argote de Molinain. The sport is practiced in two different ways, either the rider or his mount was to face the bull directly or they practically sideswiped the animal trying to spear it during the fight. This is one of the most dangerous and unique sport of Spain and an important part of the traditions in Spain.

Spain has an outstanding reputation in the world of football. The Spain’s follow passionately their national team and of course the successful squad – La Selection. The Spanish league is filled with star players from around the world. The league is one of the biggest – and most popular and followed by millions of fans around the world. The last few years have been very successful for Spanish football. Squad is the ruling European champion and was recently ranked first in the FIFA world rankings.

Flamenco is a Spanish art form with songs, music and dance, whose foundation is unknown. Musically influence shows that they come from many sources, such as India, Morocco, Egypt, Greece and several other countries along the Mediterranean Sea. The songs, which often show strong emotions, are told with music as handclaps, guitars, Cajon. It’s probably the most famous Spanish tradition.

A country I like to visit – Spain. (2016, Mar 22). Retrieved from http://studymoose.com/a-country-i-like-to-visit-spain-essay 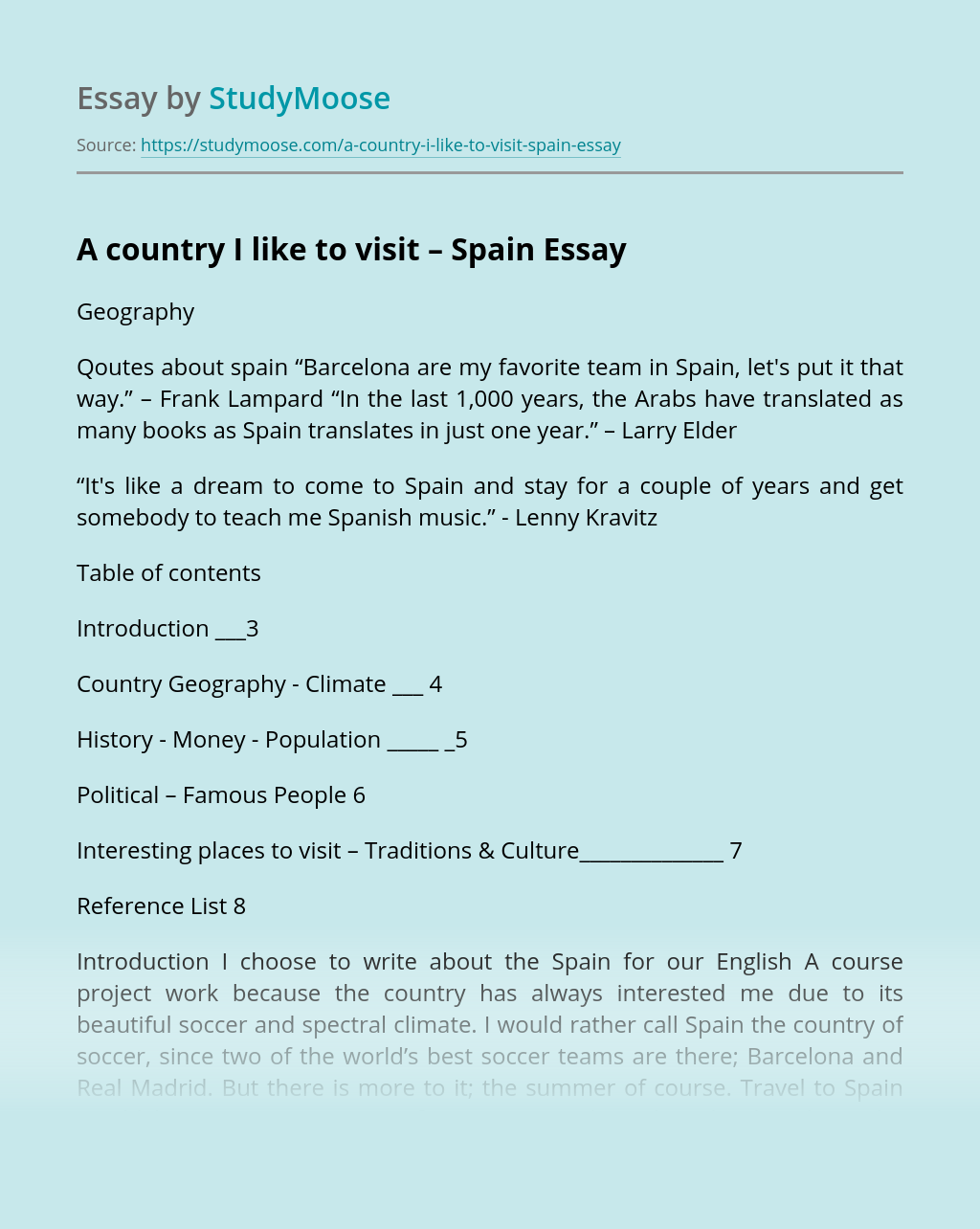