“Examine the techniques used by the director of The Sixth Sense. How are the scenes in the film presented to maintain the belief of Malcolm Crowe being alive? Evaluate the importance of these techniques to the film as a whole” The Sixth Sense (1999) directed and written by M. Night Shyamalan is a psychological thriller which touches upon elements of the supernatural. In the film, Malcolm Crowe (Bruce Willis) is presented to the audience as being alive.

The techniques used by the director to maintain the perception of Malcolm’s reality include deceptive techniques using language shots or acting, the relationship between Malcolm and Cole Sears (Haley Joel Osment) and specifically Shyamalan’s way of creating an illusion to deceive the audience.

Don't use plagiarized sources. Get your custom essay on
“ The Sixth Sense by M. Night Shyamalan ”
Get custom paper
NEW! smart matching with writer

The film, The Sixth Sense is based upon communication. The running theme of communication is significantly evident in the relationship of Malcolm Crowe and Cole Sears. Cole is isolated because he cannot communicate with his friends, his mother or the ghosts haunting him – until he meets Malcolm.

Malcolm addresses Cole when he meets him in a church (3) Cole is reciting the words “De profundis clamo ad te domine” (out of the depths, I cry to you oh lord) a traditional catholic psalm read, when someone has died. Malcolm reassures Cole that he is doctor and Cole is safe, not something ghosts usually do giving false evidence to Malcolm’s reality. Cole initially trusts Malcolm because of this and they begin to converse. Malcolm tells him he “used to be a doctor, I won an award once” speaking about himself in the past tense.

This quote plants the idea of Malcolm being deceased but becomes disregarded considering Malcolm’s entrance and promise to see Cole again, and then Cole agreeing initiating his trust. This trust is a deceptive basis to Malcolm’s reality foremost because Cole hasn’t been trusted or spoke to the any ghosts that have been visiting him and up till this point the audience are unaware of Coles “gift”. When we first see Malcolm after he has been shot by Vincent, there is a close-up of the notes he is writing.

They are firstly detailed about Vincent however he turns over a new page and begins to note down Cole’s situation, a clever symbol used by Shyamalan. This is the original link between Cole and Vincent. They both are/were in the same situation from a single parent family suffering with the same condition. Malcolm failed Vincent; he diagnosed him to have childhood schizophrenia which he later discovers isn’t what he suffered from, he was haunted too. There is now an aim of “unfinished business” which is common in films, books or TV shows concerning ghosts.

Malcolm has set a personal goal of helping Cole because he didn’t help Vincent which is precisely why he is still in the real world. Fortunately for him he begins to solve Cole’s problems and acts as his spirit guide, but does Cole know Malcolm is dead? Shyamalan has a specific and unique way of creating an affecting scene in the film. There are two scenes in particular that help maintain the perception of Malcolm being alive; these two scenes are the Restaurant Scene with Malcolm and his wife (Olivia Williams) (6) and the Basement Scene (3). In the scene of the restaurant, Malcolm is “late” for his anniversary dinner.

As a first time audience, we aren’t aware of Malcolm state however when this is revealed, Anna Crowe’s actions become justified. Unaware of Malcolm’s attendance Anna seems to be angry and agitated she avoids making eye contact with the “living” Malcolm but the audience presume it’s because of his tardiness but it’s because she cannot see him. This whole scene is shot from either behind Anna or a close up of her facial expressions so the viewers can’t see who she is focusing on. Shyamalan uses these techniques to conceal the deception of reality.

Whenever Anna does look up it can be read as looking at Malcolm but if you are aware that Malcolm is dead she could just be glancing across the restaurant, justifying the scene. The climax of the scene is when Anna does briefly look at Malcolm then sighs “happy anniversary”. Shyamalan makes this line particularly poignant because of the circumstance whether being first time audience, knowing the extremity of Cole’s case is taking its toll on Malcolm’s marriage or being a second time audience member knowing that Malcolm is there is in spirit and Anna is celebrating their anniversary alone.

The fact that the first scenario fits in directly is what makes the perception of Malcolm’s reality believable. In the basement scene, we see Malcolm return home after his initial meeting with Cole ( 3) he goes to the basement door and tries the knob so he can go down to his office. However the door is locked, he searches his pockets naturally but in the next frame we see him walking down the basement steps. The audience perceive this as Malcolm understandably finding his key and entering through the now unlocked door but as a ghost the general perception of ghost’s abilities is to move through types of barriers e. . Walls and doors etc.

Throughout the film deceptive language and acting play a major role in fooling the audience about Malcolm being alive. This is evident in the scene where Malcolm has his first formal consultation with Cole and his mother (5). The scene starts with Lyn Sear (Toni Collette) and Malcolm sat opposite each other in thought suggesting that they have just been discussing Cole’s situation. As Cole enters Lyn greets him with “Hey baby how was your day? You know you can tell me things if you need to. This line fools the audience into believing that Malcolm and Lyn must have been talking about Cole’s problems prior to his entrance.

When Lyn has finished speaking to Cole she tells him “you’ve got an hour”, to the audience it seems she’s allowed him an hour’s worth of therapy with Malcolm however she cannot see Malcolm so it is meant by the director that she’s giving Cole an hour to play before dinner. Another example of deceptive language/acting is in the scene where Malcolm returns home to find his wife asleep (18).

This scene is shortly followed by revelation of Malcolm being dead. When he enters, he finds her asleep and calls her name then short conversation ensues, “MALCOLM: Anna, I’ve been so lost. I need my best friend. ANNA: I miss you. Malcolm’s eyes move back up. He looks at his sleeping wife. ANNA’S TALKING IN HER SLEEP. MALCOLM: I miss you. ANNA: Why, Malcolm? MALCOLM: What, Anna? What did I do? What’s made you so sad? ANNA: Why did you leave me? MALCOLM: I didn’t leave you. He gazes curiously at a gold wedding band lying on the wood floor. Anna falls back into a deep sleep. ”

The content of this conversation works in context because the subplot for Anna and Malcolm has been the breakdown of their marriage. This conversation for Anna is being acted as though she is asleep; previously Cole told Malcolm that he could talk to his wife when she is asleep and this is exactly what he does. This is Shyamalan’s last clue before he reveals the climax of the film. The scene is acted in whispers giving a sombre feel before all is revealed. Because the conversation works in its context it supports the basis of Malcolm’s reality further, making the impact of the revelation massive at this point.

To conclude Malcolm’s reality is maintained by the techniques of deceptive language/acting/camera shots in specifically affecting scenes. The language/actions and conveyance of the script by the actors is the most convincing technique used by Shyamalan. If the actors didn’t do the script justice they would have been readable from the beginning. The techniques that maintain the perception of Malcolm’s reality are extremely important to the plot and point of the film. Contributing to these factors is Shyamalan’s signature way of developing a scene and subtly leaving clues about Malcolm’s existence.

Malcolm and Cole’s relationship and communication is the basis to the whole film and from this many subplots including Malcolm’s marriage and the involvement of Lyn Sears develop. Besides the action in the film, the promotion of the film was cleverly put together. Firstly if the potential audience were going to see this they most probably knew the outline to the film. Going to see the film, knowing the physiological trick, they open up themselves to become deceived by the director and actors adding to the skill of deception through media. 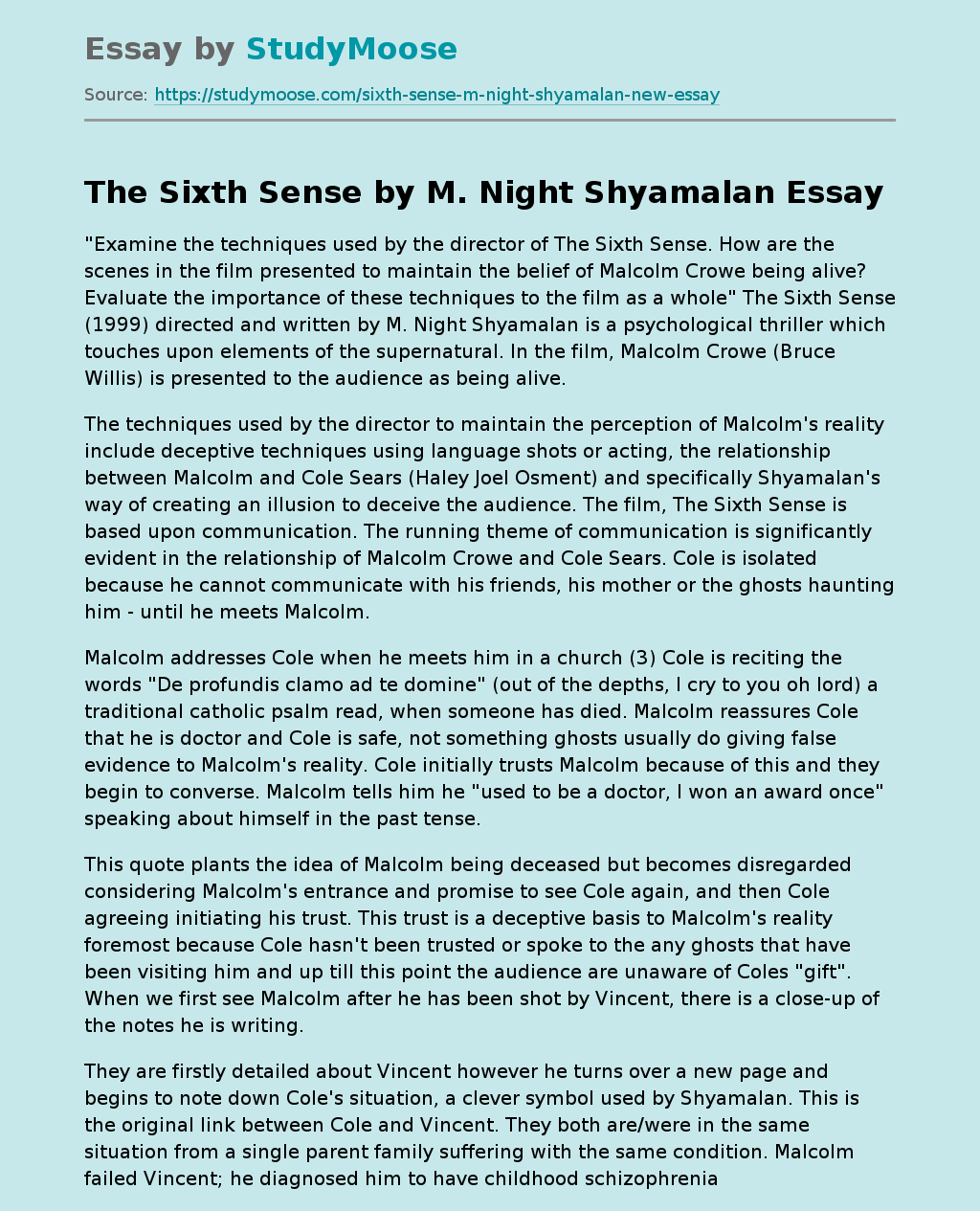