How and in What Ways does Jane Austen Show the Importance of Money in the Sense and Sensibility?

Money appears to be a main issue of Jane Austen’s “Sense and Sensibility”. It is interesting that throughout the plot of the novel money seems to be the central issue. Affecting all the characters, it is money which pushes the plot, influences the choice of husband and marriage, establishes a place in society, seems to be influential in happiness and affects honesty and morality in characters. . Money always appeared to be a problem for the Dashwoods.

Don't use plagiarized sources. Get your custom essay on
“ How and in What Ways does Jane Austen Show the Importance of Money in the Sense and Sensibility? ”
Get custom paper
NEW! smart matching with writer

Austen uses money as a glue to hold the plot together; it follows the story and supports any gaps in the storyline. There is always a presence of money lingering in the atmosphere of the story, as there are many aspects of the novel where money has a definite link. The subject of money pushes the plot forward; For example, Mr.

Proficient in: Importance Of Money In Life

Willoughby left Marianne for a wealthier woman so Marianne needed to pick herself off the ground and move on to another stage of her life because she had lost her first love to money. The key reason in the importance of money appeared to be society. At the time of Austen the importance of being wealthy was one of the most important matters for any person. The amount of money one had affected one’s social status. People were not respected if they were not of a wealthy standard.

The Dashwoods lived in a wealthy estate that had been inherited, it was far too big for a family of their size but they were happy with it because they thought it necessary to show excess wealth. The disappointment the Dashwoods showed when they had to move to a cottage was obvious. They complained of the size when it seemed over spacious and the quality when it seemed there was not a mark of imperfection, even said so by Mr. Willoughby, “To me it is faultless . . . . ..

I would instantly pull Combe down, and build it up again in the exact plan of this cottage. ” For the Dashwoods, money can only be talked about among close friends through whom trust is conveyed, like Mr. Willoughby. The reason for the grandeur the Dashwoods lived in beforehand in their large estate was inheritance, meaning that they did not necessarily have the wealth to live in such a place. They had been used to living in a house that pleased their social status as far as money was concerned and this contented them.

To the women’s misfortune, Mr. Dashwood had passed away and they were forced to move out, as the house was to go to the eldest brother, John and his wife Fanny, the house going to the eldest brother was merely due to the low status of women at this time. This seemed ridiculous to the Dashwoods because there were four of them and only two of the new residents; but John and Fanny were not complaining because they had gained social status by moving into a wealthy estate.

It came as a shock to the Dashwood family more than anything else. They had to independently search for their own house, which is a rare event for someone from a family of such wealth. The shielded life of the first class female of Austen’s time created problems for the future of the women as men receive the privileges and women are not left with much and must undergo what is probably in their opinion a humiliating fall in their social status. The Dashwoods had an experience with this situation and were not at all satisfied.

The Dashwood women were constantly searching for a rich man to marry into the family, the issue of wealth came before the important qualities of a man. For example, the Dashwoods were exceedingly keen on marrying a man of the name, Edward Ferrars into the family because, “Edward Ferrars was the eldest son of a man who died very rich”. His personality and physical appearance were ignored and the money was the only thing the Dashwoods focused on. “Edward Ferrars was not recommended to their good opinion by any peculiar graces of person or address.

He was not handsome, and his manners required intimacy to make them pleasing. He was too diffident to do justice to himself. ” Marriage was very important for women of Austen’s time so that there was a man at the woman’s side to keep her financially stable. There were mistakes made by certain people in the book where greed was mistaken for love. Mr. Willoughby was madly in love with Marianne Dashwood, but he married another because Marianne’s family was suffering from financial difficulty whereas the woman he married was profoundly rich.

He was forced into a marriage that he would have been happier without because he was tricked by the power of money over love, which he later regretted. This shows how money can do damage. It caused hurt and regret of both Willoughby and Marianne. Money can make people selfish and greedy. It causes deceit in some cases, which leads to unhappiness. It is frightening how money can sometimes have the power to control people. John Dashwood was considering “to take three thousand pounds from the fortune of their son” and offer it to his stepmother and half sisters, the Dashwood family.

Mrs. John Dashwood was furious that her husband could ever contemplate such a thing. “She begged him to think again on the subject. How could he answer it to himself to rob his child, and his only child too” He pointed out to his selfish wife that they too were family and were in need of the money more than their grown son, Edward. He told her, “It was my father’s last request on me . . . that I should assist his widow and daughters”. Mrs. John Dashwood was exceedingly cunning and used every technique she could find in her selfish mind to make her husband see it her way.

She used flattery and said, “What brother on earth would do half so much for his sisters! And it is-only half blood! -But you have such generous spirit! ” she used his love for his son and used phrases such as “our poor little boy”. This greed was of disadvantage to the Dashwood family when Mr. and Mrs. John Dashwood would have survived without the extra finance. Mr. Willoughby came across as a charming gentleman, loved by all until he fell into the evil web that money spun in his head. He broke Marianne’s precious heart all for money.

He made it worse by not communicating Marianne and letting her find out the truth the hard way. He did not remember that she was the girl he fell in love with because he was blinded with money, he did not care that he would hurt her because he only cared about money. People like Willoughby believe that money will bring them happiness but find that they are fooled because they search for it the wrong way. Happiness needs to be found and retained in something more solid like love if it is to last.

Marianne is a wonderful girl; she is very intelligent and id the only person who does not look at things in a two dimensional way. She was not in any way affected by money. She did not once complain about the small cottage and did not complain of the small pianoforte that had replaced the fabulous grand piano, her family complained yet she was the person who played it, no one else. The most important view of Marianne’s was her realization that love is greater than money.

Sweet Marianne was concerned for her sister Elinor’s happiness when she speculated her love for Edward Ferrars. She pointed out that the man had “no taste for drawing” and a number of other things. She thought him dull and not worthy enough for her sister. Marianne had discovered the vital thing that no one else was wise enough to find, sensitive enough to sense or caring enough to see. Unlike most characters in the book, money was not on the top of her list of importance.

Instead, the well being of her family, happiness in love and her passion for literature and art would have been placed at the top, leaving money forgotten somewhere near the bottom of the list. If all the characters in “Sense and Sensibility” had used Marianne’s view point the atmosphere would be pleasanter for the characters would be contented without having to worry about their social status, having no need to deceive others, having an opportunity to marry the person whom one truly loved and caring for others with others caring of them too.

Using Marianne’s viewpoint we can conclude that money, despite it’s importance in the novel does not bring happiness. When one focuses on money one’s emotional surroundings will collapse leaving money as the only possession. Money can buy and repair one’s concrete desires but it cannot repair or renew the emotional surroundings that were once present but were ignored so faded out for good. Mr. Willoughby could relate to this.

How and in What Ways does Jane Austen Show the Importance of Money in the Sense and Sensibility?. (2020, Jun 02). Retrieved from https://studymoose.com/ways-jane-austen-show-importance-money-sense-sensibility-new-essay 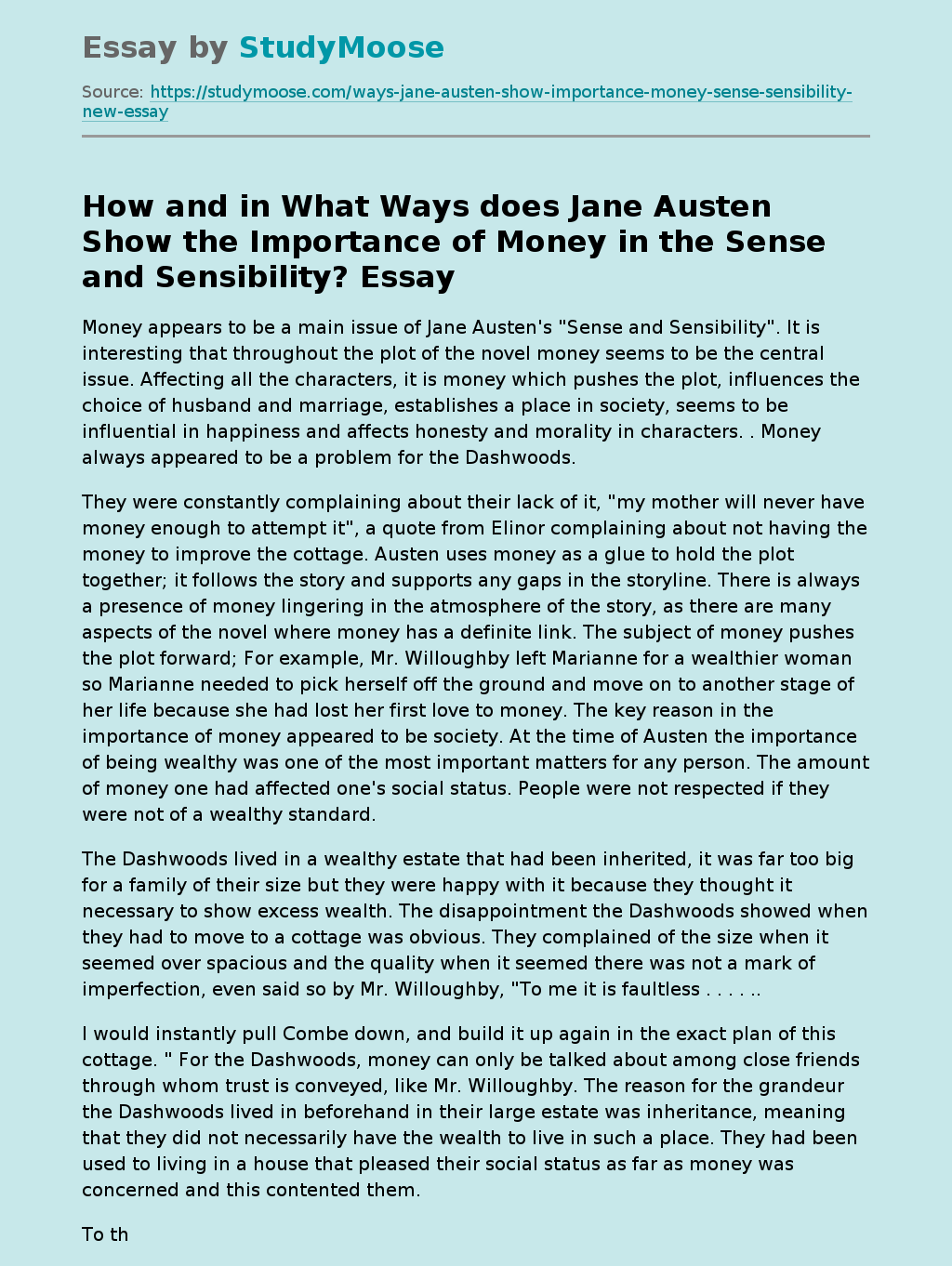