Sense and Sensibility is a novel by Jane Austen set in the late 18th Century. The novel follows the Dashwood sisters, Elinor and Marianne, as they move to a new home and pursue their love interests. A philosophical theme of the whole novel is the tension between sense and sensibility, rationalism and expressionism, which are embodied in the lives of the two sisters. The original drafts were titled “Elinor and Marianne” and the change to “Sense and Sensibility” suggests the thematic significance of the title to the novel.

Don't use plagiarized sources. Get your custom essay on
“ “Sense and Sensibility” Analysis ”
Get custom paper
NEW! smart matching with writer

Throughout the novel, the two main characters, Elinor and Marianne are characterized by these two philosophies in their attitudes towards marriage, their behavior in social gatherings, and their ways of thinking and feeling. Although there are many examples in the novel, which suggest sense and sensibility are opposite to each other. As the novel progresses, Austen leaves us to consider whether they can be intertwined and interdependent. This could be interpreted through the title itself, “Sense and Sensibility”, where the “and” infers interdependence and coexistence.

Interpretations of the novel suggest that this novel is primarily regarding marriage and the sisters’ quest for it. For Marilyn Butler, the sisters represent the choice between a conservative skepticism and the wild optimism. This is true to a certain extent in their quest for marriages, where one considers the question of marriage as for love, or merely economic practicality, such as to secure a home and financial security. In Austen’s time, this was a necessity as made evident in the novel through Edward and also painfully through Willoughby.

In conversations with her sister, Elinor displays rational judgement when considering the prospect of marrying Edward, despite feeling ”esteem” for him, she realizes his difficulties in finances and is not overwhelmed by her feelings. In contrast, Marianne’s assumption that Willoughy loved her was “everyday implied, but never professedly declared”, where in the end Willoughby leaves the affectionate Marianne for a relationship that ensures financial stability. His behaviour is one of prudence, in spite of his self-indulgent characterization, and this suggests that sense and sensibility can coexist.

Another concern in the novel is the way people behave according to social conventions. Here the themes of rationalism and romanticism, sense and sensibility become in conflict with each other. This is evident when the two sisters attend a ball in London. Halfway through the ball, Marianne and Elinor spot Willoughby, and she becomes “crimson” all over, and begins to call out for Willoughby. Elinor herself was left shocked and immediately attempts to control her sister as such behaviour in Austen’s time would lead to false assumptions of intimacy. Here Austen emphasizes the necessity of concealing to an extent one’s feelings in public situations.

Elinor, as the privileged character, provides the reader with a strong example of this. Her restraint is displayed when she hears Lucy’s secret. She “exerts” herself to maintain her countenance despite the overwhelming emotional weight. As a result, Lucy does not become offended; neither does the people around her. However throughout this situation, Elinor is still shown to have the capacity to feel, and she eventually opens up to Marianne about Edward. This suggests the author is trying to convey through Elinor’s characterization that as part of society, a balance is what one should seek, between social convention and opening up one’s emotions.

Throughout the novel, Austen’s use of narrative is pivotal in characterizing the way her characters think and feel to explore the themes of sense and sensibility. One constant theme in the novel is the value of first impressions. An example of this is when the Dashwood sisters go for a walk at a valley near Barton, and they spot a dashing man on horseback, Marianne arrives at a conclusion it is Willoughby and it then turns out to be Edward instead. Marianne is characterized as quick to jump to conclusions, and the language she uses, “it must be” are self-indulgent and act to affirm herself without completely considering the situation. Another example is when she accepts a horse from Willoughby, without considering it’s financial burden. This is in contrast to Elinor, Austen has her rebuke Marianne and persuade her to consider her mother and their family’s financial situation. And when Marianne does consider because of Elinor, Austen effectively emphasizes that one ought to use logical reasoning to consider situations, and not only rely on instinct.

As a conclusion, throughout the novel there is no indication of sense completely outweighing sensibility or vice versa. Instead, the symbol of sense, Elinor also has the capacity to feel, and Marianne as the symbol of sensibility also shows she can exercise prudence. At the end of the novel however, Marianne is seen to have experienced a transformation and more inclined towards the side of “sense” while retaining her natural sensibility. Through this, Austen and her characterization of Elinor help convey that one does require a balance between one’s sense and sensibility. 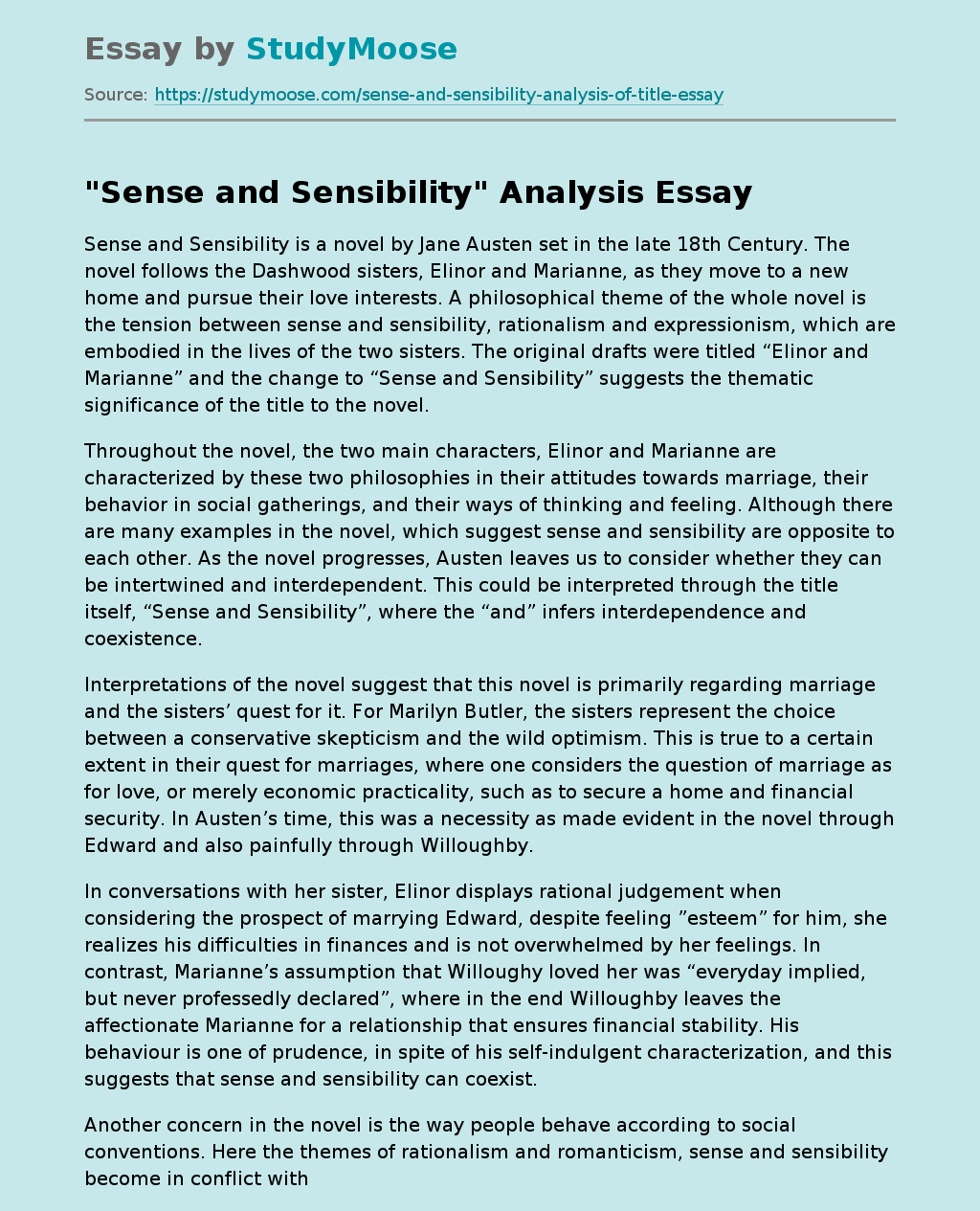