The characters in Alice in Wonderland

As the Cheshire-Cat appears and sits on a limb of a tree with his grinning face while Alice is walking in the forest he explains to her that everyone in wonderland is mad even Alice, which is why she is there. Alice did not agree with the Cheshire-Cat but continued on her way to see the March Hare anyways. Being mad or crazy does not always make a person bad. In fact the Cheshire-Cat was right, all the people in Wonderland were indeed mad and they were all there for that reason.

Don't use plagiarized sources. Get your custom essay on
“ The characters in Alice in Wonderland ”
Get custom paper
NEW! smart matching with writer

In every classic story there are good characters versus bad characters.

Most of the characters in the ook are middle characters that do not have a good or bad sense of personality. Negative characters can be identified by color and personality as well. The Queen of Hearts for instance is represented by the color red with represents fury and anger. That describes the Queen perfectly. Alice is a positive character in the story of Alice in Wonderland.

She is the main character of the story. Lewis Carroll does a good Job of portraying Alice as a young curious and well mannered lady. Youth and innocence can describe Alice as a positive character.

Throughout the whole story Alice gets onfused quit easily when talking to the other people in Wonderland, the Mad Hatter and the Caterpillar especially. Although she is in an obscure and crazy world, Alice keeps her cool for the most part and tries to keep her senses. In the world of Wonderland, however, being sane is mad, which allows Alice to fit right in with the others (From Alice on Stage). The White Rabbit was made to contrast Alice in every way. He is timid, old, punctual, and often nervous. The White Rabbit can be seen as a positive character because he is white in color, also because he is somewhat helpful.

Although he is shy and nervous he does not do anything that would make him be considered a negative character. I would say he is somewhat of a mediator, neither positive nor negative. The White Rabbit is significant in the story of Alice in Wonderland in order to understand Alice more (From Alice on Stage). Most unique of them all is the Cheshire-Cat. When Alice first comes across the Cheshire-Cat he is in the house of the Duchess and is grinning very widely. From the way he is first described I thought that he was going to be a negative character in the story.

His grin seemed some what villainous and because he was mysterious led to the conclusion he was a negative character. After the book goes on the Cheshire-Cat is very calm and sensible in the mad world of Wonderland. He helps Alice when she need someone to talk to and when she has questions about Wonderland. The Cheshire-Cat is the most knowledgeable about Wonderland and fits right in when it comes to craziness (Spark Notes from Alice in Wonderland). Queen of Hearts. Some of the other characters have their moments of rudeness or snappy ways but none of them can be identified as complete negative characters esides the Queen of Hearts.

When we first meet the Queen she comes into the yard yelling orders at everyone and being very rude. From the beginning you can tell that the Queen has anger and fury within her. Because she is red in color she can be identified as negative. Red usually has a bad connotation and is usually associated with anger and fire or fury. She makes irrational decisions, most of them affecting everyone but herself. Everyone in her court is afraid of her because she is known for prosecuting and beheading anything and anyone who gets in her way (From Alice on Stage).

The characters in Alice in Wonderland. (2018, Nov 07). Retrieved from http://studymoose.com/alice-in-wonderland-4-essay 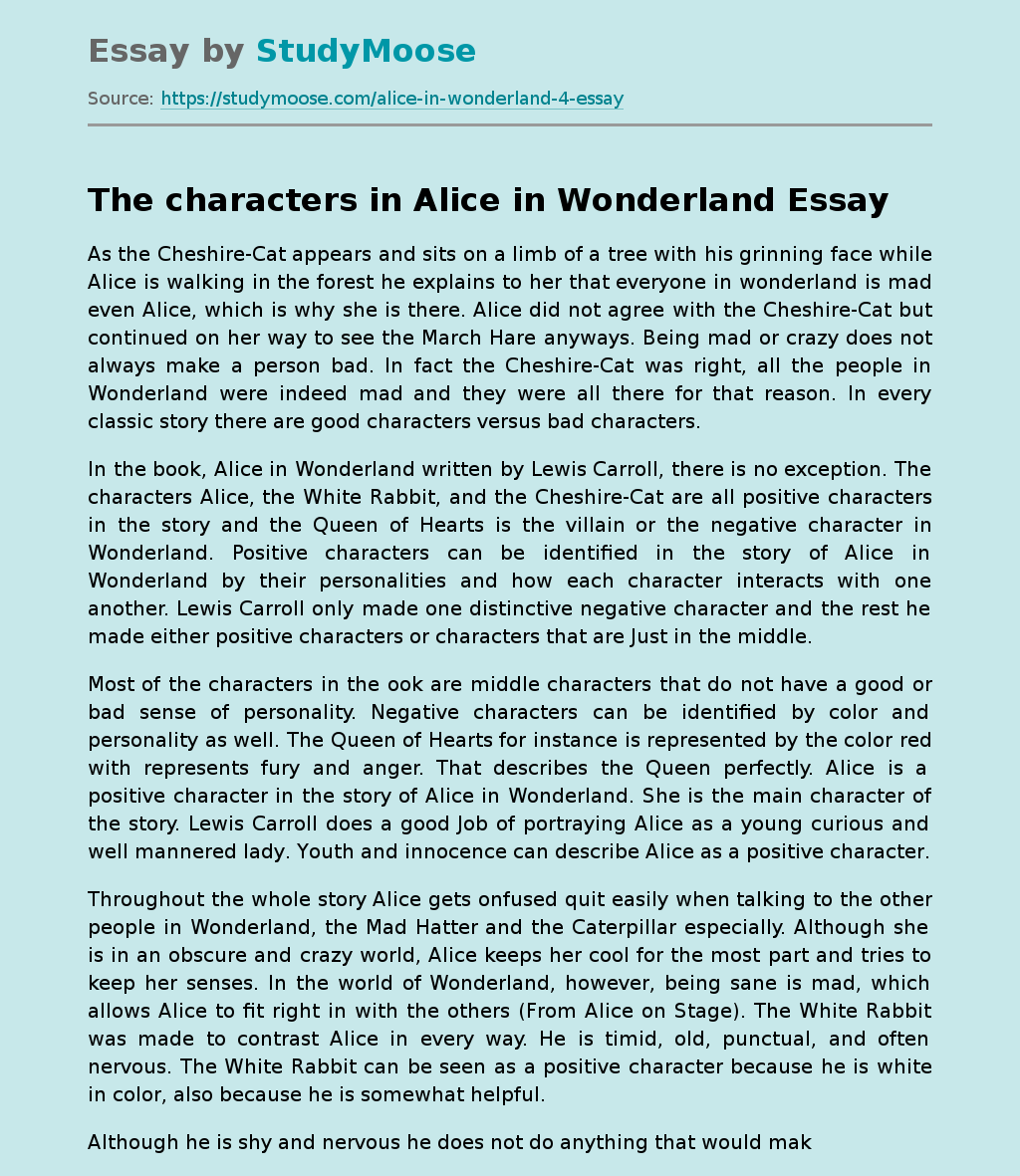