Should the Australian Flag Be Changed?

Get a verified writer to help you with Should the Australian Flag Be Changed?

I will also show that the present flag is not instantly recognisable and is too similar to flags of other countries.

The current Australian flag does not represent all Australians, in particular, Aborigines. As a nation, Australia is heading towards Aboriginal reconciliation and by changing our flag to include Aboriginal elements, we would take reconciliation a major step further. By acknowledging publicly that Aborigines are a part of our nation, not only are we making it clear to Aborigines that we want to reconcile, but we are also sending out a message to other countries that we are proud to be a multi-cultural country.

Our current flag suggests that as a country, we value Great Britain more highly than our own native people.

Yet when the AGB conducted a nation-wide survey it discovered that 66% of those polled supported elements of the Aboriginal flag appearing on a new Australian flag. This is another example of our current flag not representing Australians. The Union Jack featured on the Australian flag may once have been relevant, but today holds no special significance for Australia.

The Union Jack, a prominent aspect of our flag, symbolises the uniting of England, Scotland and Ireland, to form Great Britain. This was an historic event but even so this is not important to Australia.

Some people believe the Union Jack is vital for our flag to symbolise our ties with Britain. However these people often over look the fact that Australia, which is often referred to as the ? Land of Migrants,’ is made up of a population of which almost 40% of the people are not born here. Much of our population has migrated form other parts of Europe, Asia, South America and Africa. Therefore our ties with Britain are less important and meaningful. If we remove the Union Jack from our flag, this does not mean that Great Britain will not assist us if we find ourselves in need of their aid.

Canada changed its flag without changing its relationship with Great Britain. A country’s flag needs to be easily recognisable, which is another requirement our current flag fails to meet. A flag is used so people can instantly recognise the country it represents. Yet, when the Australian flag is flown, foreigners do not easily associate it with Australia and are often confused. This is because our flag is too similar to New Zealand’s flag, as it also features the Southern Cross and the Union Jack. The only difference between the Australian flag and the New Zealand flag is Australia’s federation star.

This is similar to the issue of Australia’s national anthem. Our former national anthem was God Save the Queen. A national anthem also needs to be instantly recognisable and because this anthem was also used by the UK the change to another anthem was made. This was mainly because it was too confusing at international events, such as the Olympics. Our present flag also features symbols that are not unique to Australia and do not set us apart from other countries. The Southern Cross, for example, is associated with many other countries in the southern hemisphere, not just Australia.

The Southern Cross appears on the national flags of Papua New Guinea, Western Samoa, Solomon Islands, New Zealand and Brazil. The Australian flag should consist of truly Australian elements, to create a unique and original flag. Canada, a former British colony did not originally have a distinct flag which set them apart form other countries, as their flag was derived form Great Britain’s flag. To set themselves apart form Great Britain they adopted a flag with a unique Canadian symbol, the maple leaf. The Australian flag is well overdue for a change.

The current flag is outdated and the Southern Cross and the Union Jack are no longer relevant or unique to Australia. The present Australian flag also fails to be instantly recognisable, confusing foreigners, as it is too similar to many other countries. Yet, for me, the most important reason the flag needs changing is to represent Aboriginal Australia and to encourage Aboriginal Reconciliation, by creating a flag that incorporates Aboriginal elements and our native history. By doing this we would be representing all Australians. Clearly, the Australian flag should be changed.

Should the Australian Flag Be Changed?. (2017, Jan 08). Retrieved from https://studymoose.com/should-the-australian-flag-be-changed-essay

Get a verified writer to help you with Should the Australian Flag Be Changed? 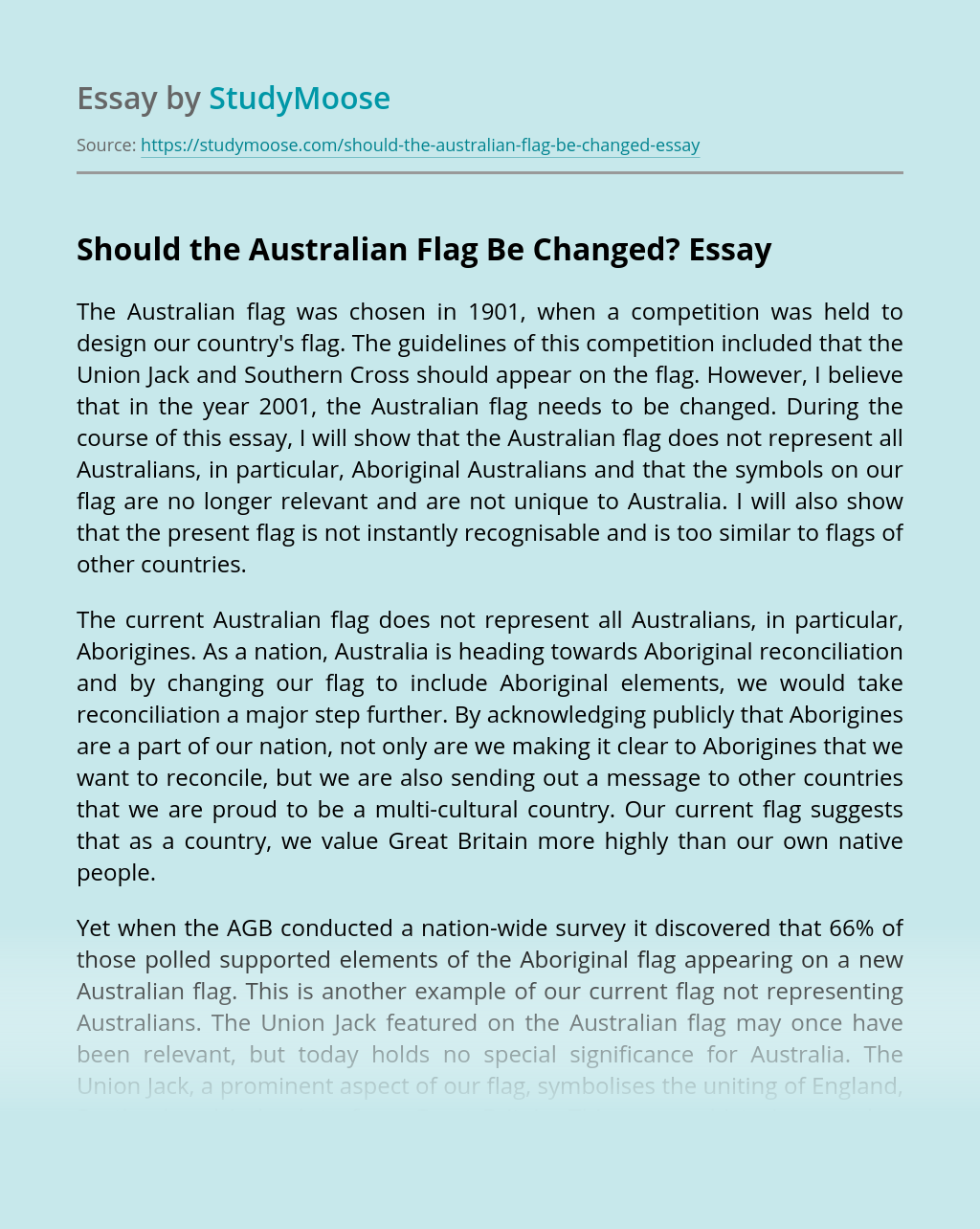 The question of identity is always a difficult one for those living in a culture or group, yet belonging to another. This difficulty frequently remains in the mind of most immigrants, especially the second generations who were born in a country other than their parents. Younger generations feel as if they are forced to change...

Task 1: Cross-Cultural Dimensions Describe the impact of the cross-cultural measurements of both Hofstede and Trompenaars on 2 subjects for both your house nation as the nation of your internship Trompenaars Australia 1. Universalism vs. particularism 2. Individualism vs. collectivism 3. Neutral vs. emotional 4. Particular vs. diffuse 5. Achievement vs. ascription 6. Sequential vs....

Arthur Schopenhauer once said “every men take the limit of his own field of vision for the limits of world “a vision is the best path way to understand culture. And today I will be talking about Australian vision through Douglas Stewart’s “eyes” .Australian vision are a reflection is Australian beliefs, value, and perceptions. In...

In 1914, it was the first moment of when Australia’s joined World War one, The Australian government decided that it was a mature move to support its “Mother Country’ Britain. Australians were proud of being part of the British Empire; it was the biggest empire the world had ever seen rivalling over many great ancient...

Andrew Barton ‘Banjo’ Paterson was best known as a poet and author. He became the most popular poet in Australia. He was best known for the ballad ‘Waltzing Matilda’ and his book called ‘The Man from Snowy River and Other Verses’. Banjo Paterson was born at Narrambla in New South Wales. He was the eldest...

What It Means to Be Australian

Personally, being an Australian to me means celebrating freedom and the diverse number of people. Being Australian means having to explore and experience the blue beaches, hot summer days, cold winter nights and the footy seasons. Australia means wearing shirts, shorts and thongs. Having family gatherings and barbecues, having the opportunity to vote which makes...

For the last 200 years Native people have actually been victims of discrimination, prejudice and drawback. Poor education, bad living conditions and general hardship are still overwhelming issues for a big percentage of our people and we stay ‘as a group, the most poverty stricken sector of the working class’ in Australia (Cuthoys 1983). As...

Question 2: Luhrmann’s Australia and Perkins’ Bran Nue Dae could be said to approach the apology to the Stolen Generations from various perspective. Discuss with recommendation to style. Director Baz Luhrmann and Director Rachel Perkins both dealt with Australia’s terrible and racist history and the aboriginal’s Stolen Generation in Australia and Bran Nue Dae, respectively....