I Am, You are, We are Australian

“I am Australian” was released in late 1980s by Bruce Woodley and Dobe Newton. It is a song that celebrates unity in diversity, recognising differences in ethnic background and remembrance of its history. It recognises significant events and icons in Australia’s culture, history and spirit and many reflects and ’Australian identity’ within the iconography of the song, which in itself is an Australian icon. This song was written very recently, thus contains many parts of Australian society which older poems and folk songs do not mention, such as women in society and aboriginal culture.

Don't use plagiarized sources. Get your custom essay on
“ I Am, You are, We are Australian ”
Get custom paper
NEW! smart matching with writer

This song contains no prejudice and promotes a patriotic Australian uniqueness internationally to the rest of the world, but more importantly, ourselves, of whom we can identify ourselves with these Australian qualities and culture.

The first stanza of this song starts off with the Dreamtime and the introduction of an Aboriginal as he watches the arrival of the first ships on the shores of their land.

It is very mystical and chaste, whilst the second verse is spoken through the thoughts of a convict as he arrives at this new colony and becomes a freeman, reflecting how Australian began as a convict settlement more than 100 years ago. This is the very start of Australian history, where throughout the rest of the song, we go through a transition of Australian events continuing with the gold rush era, to the depression. “The girl became a woman on the long and dusty road,” refers to Australia’s beginning as a small convict colony, and growing up as a nation.

This third stanza ends with the line, “I’m a bushie, I’m a battler, I am Australian” identifying the true Australian spirit with pride.

The content of the chorus represents pride in our unity as a nation and also our diverse multiculturalism. The chorus is really what brings the nationalistic emotion of which this song portrays. Here cultural differences are acknowledged, but they are submerged into national identity. Also, during the chorus, the male and female voices who were previously singing separately are now united together as if to bring more meaning to the essence of the song. “I am, you are, we are Australian.”

The fourth stanza consists entirely of Australian icons, referencing to Albert Namatjira, the first famous Aboriginal painter, Clancy of the Overflow (a poem of a free spirited drover by famous Australian poet Banjo Patterson), Ned Kelly, the bushranger and Waltzing Matilda. These are all highly recognised Australian figures that have shaped Australian identity and given it meaning. Ned Kelly, for example was described as a “Robin Hood,” taking money from the rich and giving to the poor, and although he loathed authority, he was fiercely loyal to his friends. Nowadays, Ned Kelly is one of the greatest folk heroes and unsuspecting fathers of Australian nationalism.

The last verse basically talks about the typical Australian landscape and climate which have also come to be a major part in Australia’s identity. The landscapes are described in detail, honestly and so distinctively that it is very obvious that it was talking about Australia. Here, we are re-directed to an almost sacred Aboriginal connection with the earth.

Australia’s multicultural identity was invented in the 1970s and probably reached its high point in the 1988 Bicentenary. The song written for the Bicentenary. ’I am Australian’ is written for both international and domestic audiences because it promotes an Australian uniqueness, national unity and hard work to the rest of the world but also contains many national aspects of Australian history, well known icons and a sense of pride, many of which only we as Australians would recognise and find meaning to. It is a multicultural anthem and reflects Australian identity.

I Am, You are, We are Australian. (2016, Jul 14). Retrieved from https://studymoose.com/i-am-you-are-we-are-australian-essay 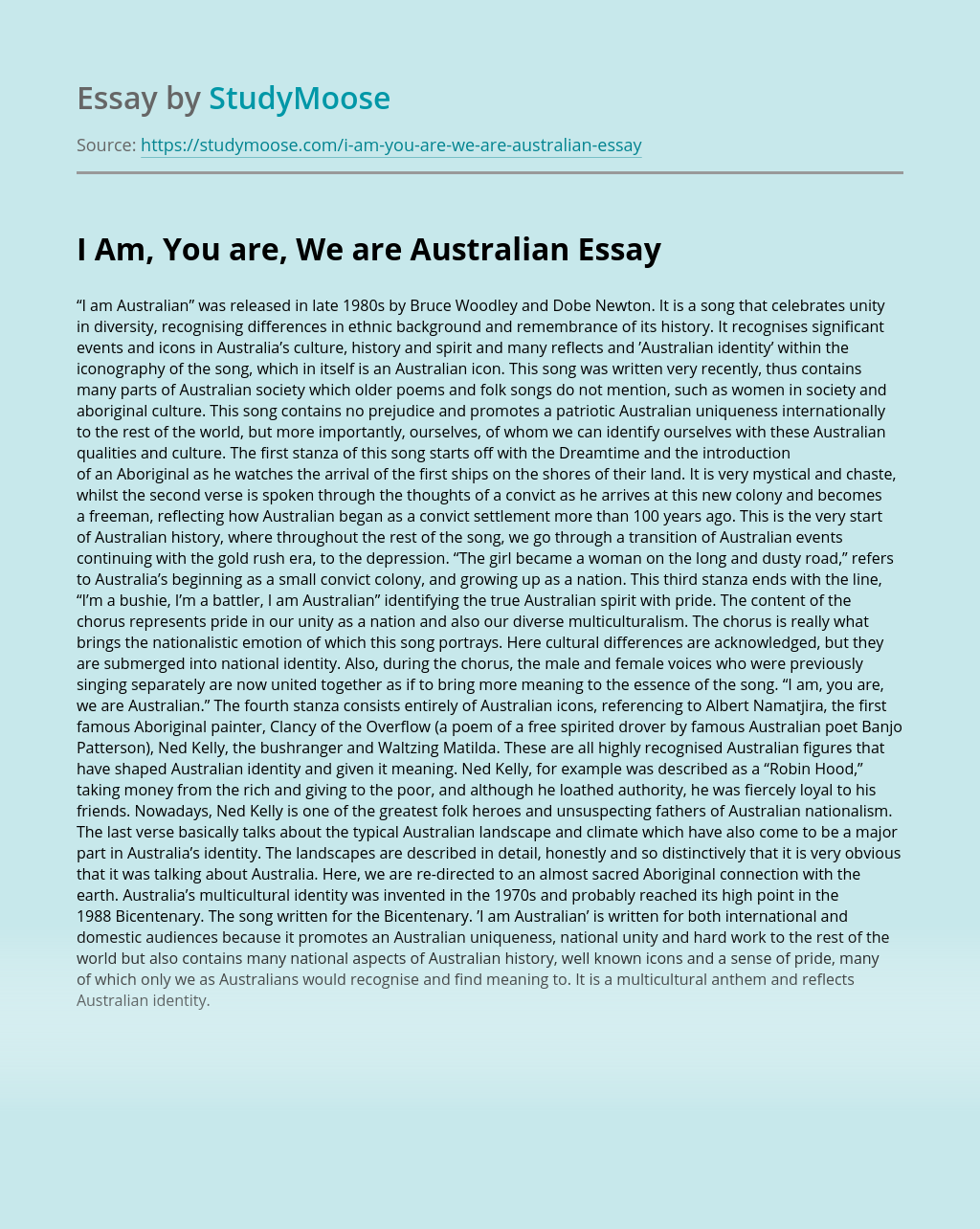