Out of the Blue Poem Analysis

In the poem ‘flag’, John Agard usesa pattern of rhetorical questions at the beginning of each stanza and answers it at the end to create effect and so the reader understands the calue of the flag. For example, “whats that fluttering in a breeze? its just a piece of cloth that brings a nation to its knees. ” This shows us that the poem is in the present tense because it uses present participles such as ‘fluttering’. Additionally , the poem is about patriotism which is symbolised by the flag and also explains how the flag is the spirit and hope of those in war.

Don't use plagiarized sources. Get your custom essay on
“ Out of the Blue Poem Analysis ”
Get custom paper
NEW! smart matching with writer

However, the poem ‘out of the blue’ written by Simon Armitage explores the thoughts and feelings of a victim of 9/11, he is trapped in a burning building, and the tone of the poem is desperate and pleading. For instance, ” I trying and trying. The heat behind me is bullying, driving. ” This suggests determination and hope from the victim as well as surrendor.

Proficient in: Hide and seek

Similarly, the poem is also written in first person. For example “I am waving, waving.

” Futhermore there is a use of enjambement in the verses and caesura breaks are also used for effect such as “The depth is appalling. Appalling. ” this infers the terror of the situation. Nevertheless, there is use of repetition in both poems. In the poem flag the second line of each stanza is repeated up till stanza four. In addition to this it makes the reader think about what the “piece of cloth” is and the influence it has.

In the same way there is repetition such as ” Do you think you are watching, watching”.

The use of repetition in both poems are used to emphasise the situation and to make the reader think about it more. Moreover, alliteration has been used in the poem ‘out of the blue’. For example “a white cotton shirt is twirling, turning”. Alliteration is used to draw attention to the sentence, and white cotton shirt is a symbol of peace and an everday day item , the poet could be telling us that this man could be a brother, husband or son. The poem ‘out of the blue’ gives us a vivid image of a man trapped in a burning building and is desperate to get out.

Whereas the ‘flag’ language gives us the image of war and the battlefield, for example ‘tent’ suggests a military camp. Moreover it shows the reader why the flag is so powerful and what a big impact it has for those in war. In conclusion, i feel both poems are structured very well, and it leaves the reader questioning the thoughts and feelings of the poet. However, although both poems are about conflict they are very different in their style of writing and way of thinking.

Out of the Blue Poem Analysis. (2017, Sep 17). Retrieved from https://studymoose.com/out-of-the-blue-poem-analysis-essay 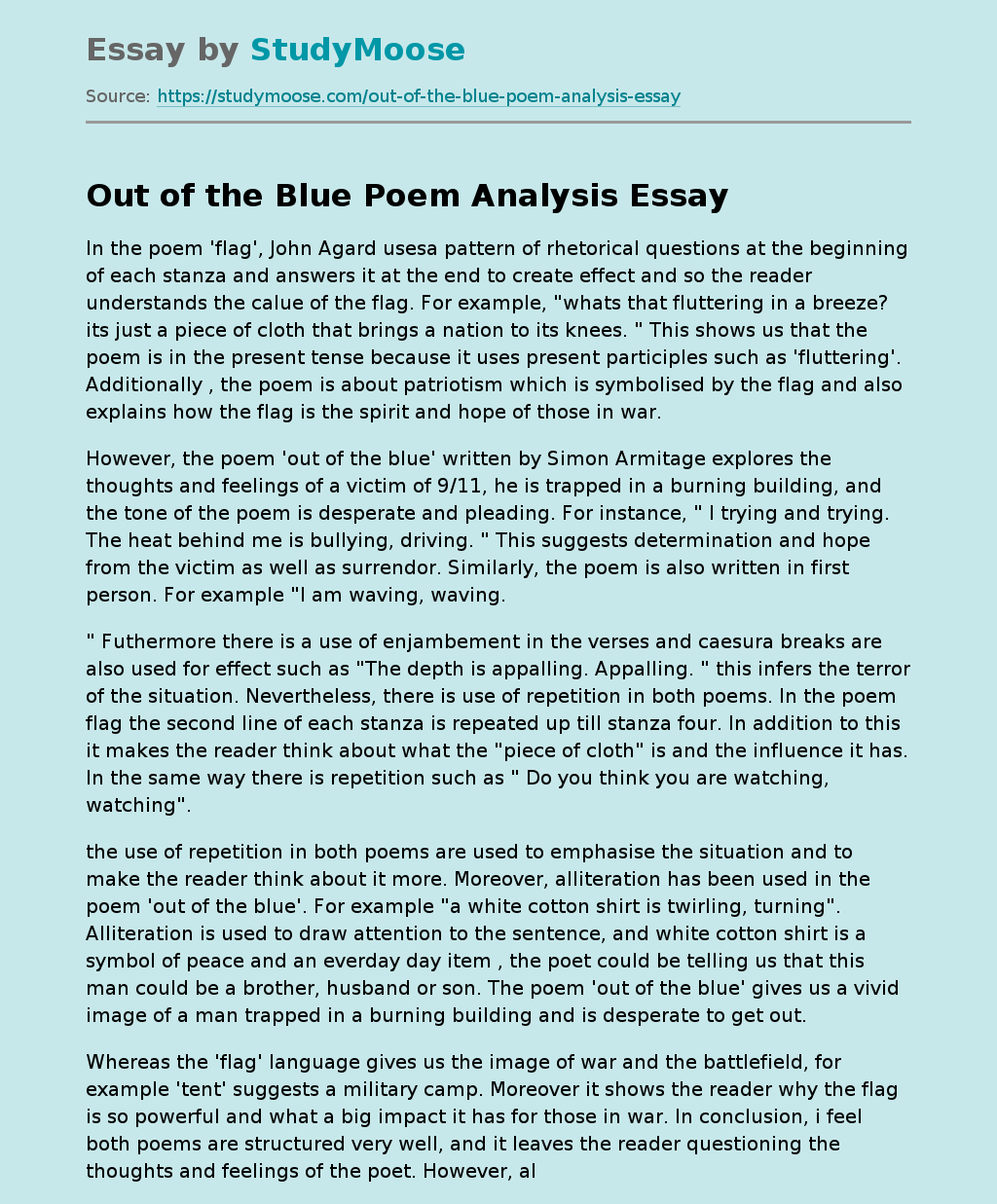