Should School Uniforms be Compulsory

When standing in the middle of a suburban high school, often the first things individuals notice are faces first and clothes second. It’s not necessarily the clothes the students are wearing, but how they wear them. With a wide range in fashion, ranging from high-waist skinny jeans to rompers; from simple Converse, to elegant high heels. At times, it can be overwhelming to enforce students to abide by the dress code. When in theory, it would be much simpler to require all students wear the same thing.

Don't use plagiarized sources. Get your custom essay on
“ Should School Uniforms be Compulsory ”
Get custom paper
NEW! smart matching with writer

However, what students wear is part of who they are; it’s the way they express their individualism. The debate of mandating school uniforms is a hot topic being argued all around the nation. Some schools claim that enforcing school uniforms decrease violence, reduce peer pressure, increase school performance, and enforce discipline. While others, claim that uniforms are a violation of our First Amendment rights. However, at the end of the day, school uniforms do not serve the purpose they were created to serve and should not be required.

There are also more recent claims that school uniforms promote an increase in academic performance.

A bulletin published by the National Association of Secondary School Principals, Peter Caruso says, “students who attend schools who attend schools with a uniform policy attend more frequently, and when in school concentrate on their education rather than their social arrangements. As a result, their academic performance increases as well” (Caruso, 1996). School uniforms are believed to neutralize students which forces them to focus more on their school work rather than being focused and consumed by other outside social factors.

Also, Caruso claims how school uniforms decrease violence and removes gang activity. He says, “Some students view school as an area within which to display the latest fashions, and students have been killed or gravely injured by other students who covet what they are wearing” (Caruso, 1996). There’s this unconscious competition over appearance that can cause violence between students. There’s a wide range of students and some families can afford the latest fashions while others aren’t as fortunate. In some areas, gangs are very prominent in which gang members wear certain colors, logos, or articles of clothing. Which can cause disturbances within schools. Caruso discusses how school uniforms takes care of these issues. However, there are many non-supporters that don’t believe that school uniforms should be required. A huge reason being is that by requiring school uniforms is an infringement of students First Amendment rights. The First Amendment of the US Constitution guarantees that all individuals have the right to express themselves freely.

In the 1970 case Richards v. Thurston, which was a case about a seventeen-year-old boy who refused to cut his hair shorter. The US First Circuit of Appeals ruled that “compelled conformity to conventional standards of appearance” does not “seem a justifiable part of the educational process” (JUSTIA US Law, n.d.). By schools taking away students First Amendment rights because a student does not conform to the social standards of a school, causes concern because what a student chooses to wear or how they choose to cut their hair, does not impact the educational process. Also, the non-believers of school uniforms not being mandated are strong advocates that clothing choices are a “crucial form of self-expression,” according to the American Civil Libraries Union of Nevada (Rowland, 2008). The ACLU of Nevada also states, “allowing students to choose their clothing is an empowering message from the schools that a student is a maturing person who is entitled to the most basic self-determination” (Rowland, 2008). Students should be allowed to express themselves in the most basic form.

Many schools who enforce school uniforms believe that they are protecting students from the distraction of the outside social world and providing a better opportunity for students to focus on academics. However, by schools mandating school uniforms, they are actually restricting students from developing as individuals. According to Jane E. Workman and Beth W. Freeburg, authors of Dress and Society discuss dress codes. They say, “Dress codes in student handbooks are a method by which school officials establish and communicate norms for student dress and appearance” (Workman & Freeburg, 2009, p. 87). Schools try to create rules to help keep norms in student dress, which can cause some issues if rules are too strict. Today’s day in age we are promoting more acceptance and appreciation in diversity within our nation’s schools. It seems odd, however, that schools are trying to require uniforms to make student look the same, rather than appreciating their differences.

Kyler Sumpter, a sixteen-year-old junior at Lindblom Math & Science Academy in Chicago says, “They [schools] decide to teach us about people like Rosa Parks, Susan B. Anthony and Booker T. Washington” he goes on to say, “We learn about how these people expressed themselves and conquered and we can’t even express ourselves in the hallways” (Sumpter, 2014). Students are taught about influential figures who dealt with a great deal of hardships because they didn’t fit in with the norms. Students are also encouraged to express themselves as individuals, but that freedom of expressing themselves individually is put to a halt at the front doors of a school. There are also concerns about the requirements of school uniforms and how it might provoke uniformed thinking. Troy Shuman, a senior at C. Milton Wright High School in Bel Air says uniforms would be “teaching conformity and squelching individual thought. Just think of prisons and gangs,” he goes on to say,” the ultimate socializer to crush rebellion in conformity in appearance. If the school system starts at clothes, where does it end?” (Park, 2007).

Uniforms often require that girls wear dresses and skirts, while boys wear pants. This can cause concern for the teens who are trying to figure out their identity and what they feel comfortable in. Jan Hoffman, a health behaviors reporter for science reports, “Last week, a cross-dressing Houston senior was sent home because his wig violated the school’s dress code rule that a boy’s hair may not be ‘longer than the bottom of a regular shirt collar’” (Hoffman, 2009). When students are being sent home because their appearance doesn’t fit the schools dress code norm, it not only effects the students’ self-esteem, but their academic performance as well. Supporters of the school uniform claim that enforcing a school uniform increases students’ academic performance because there is no external social influence distracting them, however, that’s not the case. David L. Brunsma, Ph.D., professor of Sociology at Virginia Polutechnic Institute and State University (Virginia Tech), authored an article that looked at the effects of school uniforms on children. What Brusma found was, “there is nothing in research that supports as a method for improving individual student performance and behavior or school-wide climate.”

Brunsma goes on to explain, “… the factors that most strongly influence performance and behavior are often unable to be controlled by schools” (Brunsma, 2007). So, there are other external factors that go in to impacting a student’s academic performance. A student’s home life can be a huge factor. Yongmin Sun, Ph. D. and Yuanzhang Li, Ph. D. conducted a study of 7,897 adolescents to determine whether a post-divorce family environments influence academic performance. What they found was, “…children of divorce who experience additional family transitions during late adolescence make less progress in their math and social studies performance over time” (Sun & Li, 2009). This, showing that students who grow up in divorced families can often lead to a decline in academic performance. In a peer-reviewed study conducted by Ryan Yeung, Ph. D., he found “no significant effects of school uniforms on performance on second grade reading and mathematics examinations, as well as on 10th-grade reading, mathematics, science, and history examinations” (Yeung, 2009).

School uniforms were first used to indicate lowest classes, such as orphans and then later were used to symbolize “elite tradition of excellence in education” (Brunsma, 2004, p. 5). From the very beginning uniforms were used to indicate social status. Though, uniforms are able to hide physical differences, it doesn’t hide personality, which allows bullying to still continue with the enforcement of school uniforms. This can be related to parents of low-income, they can’t afford to meet dress codes due to the expense of the uniforms. The Children’s Commission on poverty (UK) discovered that “95% of parents on low incomes reported difficulties in meeting school-related costs” (Butler, 2014). This all includes uniforms even though students are attending free public schools. Parents with low-income may not be able to afford new uniforms when one is damaged, which can lead to forms of bullying for the students within schools. There are many opinions about whether school uniforms should be mandated. It is important to remember that every student is a unique individual who exploring their inner-self to figure out who they are.

The ability for students to dress the way they like, is giving students power to develop as individuals. Also, school uniforms have little to no benefit to students regarding academic performance. Academic performance goes deeper and is mainly influenced by external factors such as family. Finally, social class continues to exist within schools that mandate school uniforms and bullying can still be an issue. School uniforms do not provide as many benefits as many would like to believe and should not be required in schools.

Should School Uniforms be Compulsory. (2021, Aug 04). Retrieved from https://studymoose.com/should-school-uniforms-be-compulsory-essay 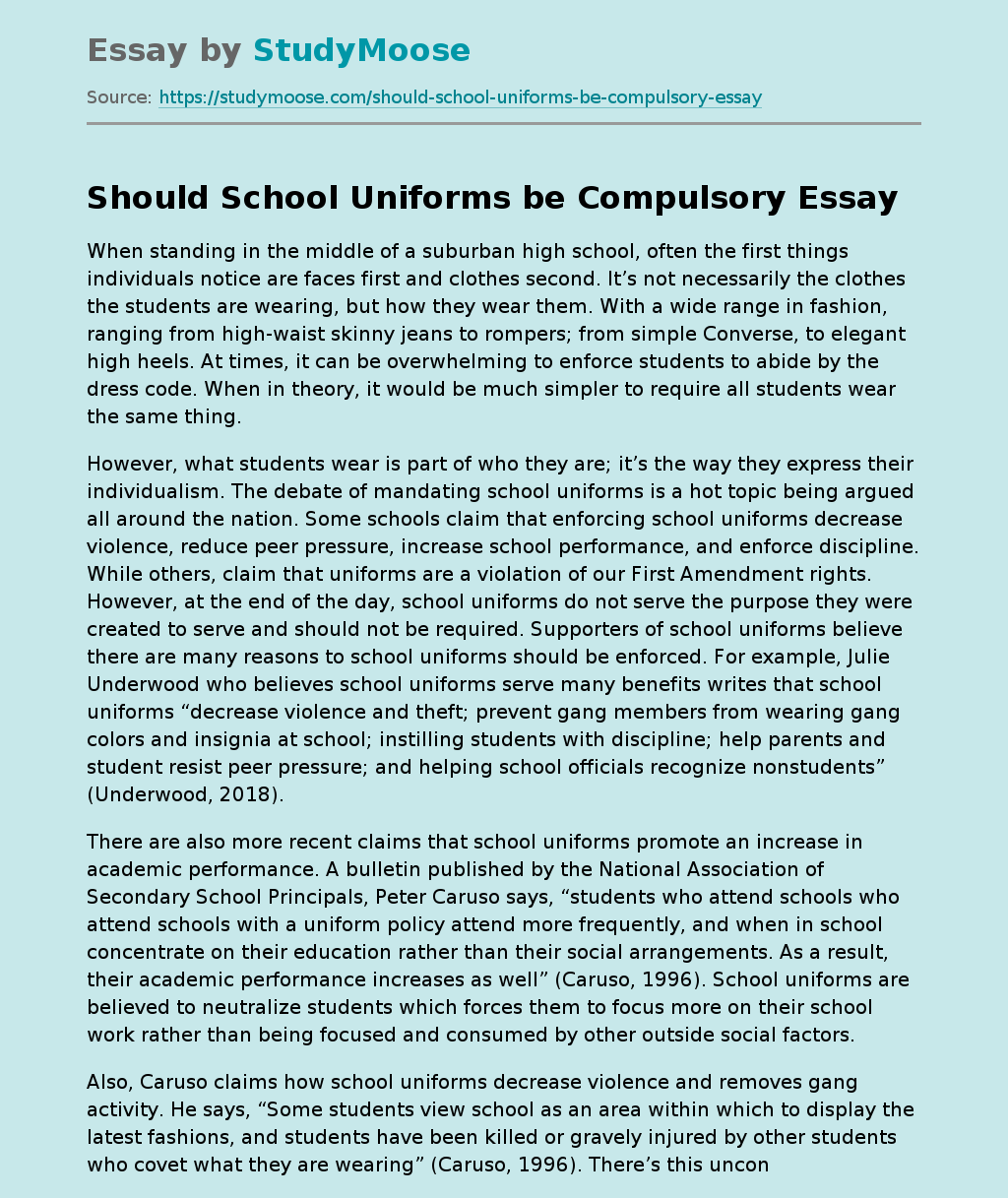