Public schools should be required to have school uniforms as a component of their dress code. There are a lot of advantages of using uniforms, it is basic to know the contrast between the schools that do it and do not require it.

Although the fact of not using school uniforms as part of the dress code gives students the freedom to express themselves, they tend to take advantage of that philosophy. Having a school uniform will limit forms of bullying.

Bullying is very common nowadays and if just wearing the same clothes will prevent a child from being bullied, then why not? In the latest news, a 6-year-old Utah child underwent a corrective medical procedure after being classified as “elf’s ears”. Though it is not bullying in regard to clothes, this just goes to show the extent of bullying that occurs day-to-day in public schools and what it can potentially lead to.

Why schools should be required to have school uniforms as an important aspect of the dress code, it is imperative to know the benefits of using them.

I think there are advantages to wearing a school uniform. Some state-funded schools still provide school uniforms and expect high school students to use them every day. One of the benefits is that students do not need to spend extra time in the morning to figure out their outfit for the day. Rather, they can use that time to study for their upcoming tests or even get extra rest for the long day ahead.

Another benefit is that most public schools provide the uniform for free, parents can use the money saved up for the kid’s school clothes on more school supplies.

Bullying can be reduced just by wearing a simple school uniform. By wearing a school uniform, students tend to feel equal. None of the bullies will feel superior because they have better clothes because, in the end, everyone is wearing the same exact thing. Some parents cannot afford to buy their children’s clothes by schools providing a school uniform, children will not get bullied for having a lesser quality of clothes. They also close the gap between socioeconomic classes because the students will have the same outfit on. Another way to prevent bullying is by making sure everyone comes into school with the uniform, otherwise, the children who are out of dress code should be punished. This can avoid the bullies to get a free pass to have ‘better’ clothes than the rest of the students. As well as if a school shooter were to enter the school, the teachers would be altered faster due to the fact that they will not have the uniform on.

Most students believe that wearing a school uniform is boring or lame. Though critics argue that children cannot express themselves when wearing the same clothes there are many ways, they can add their personal touch to their uniform. Some examples would be wearing nail polish, add accessories, wearing a different hairstyle, socks, and the list could just go on. (Dave Anderson, 2017)

Another life lesson that wearing a uniform gives a child is punctual, this can limit them from the school when they know exactly what to wear in the morning. Everyone wearing the same outfit, the thing that matters is tidiness. We know that every kid loves to break rules and it’s hard for them to obey, no one can deny that. However, uniforms can save valuable class time by teachers not having to check the time on each and every student of what he or she is wearing and if it follows the dress code guidelines.

When we talk about safety for the children, wearing the same clothes makes it easier for teachers to identify the children when going somewhere other than a school like field trips. School uniforms limit children from being harassed and school is supposed to be a safe place for them other than their home. Uniforms mean more than just clothes, it shows equality, controls bullying to a considerable level and even is cost-effective. 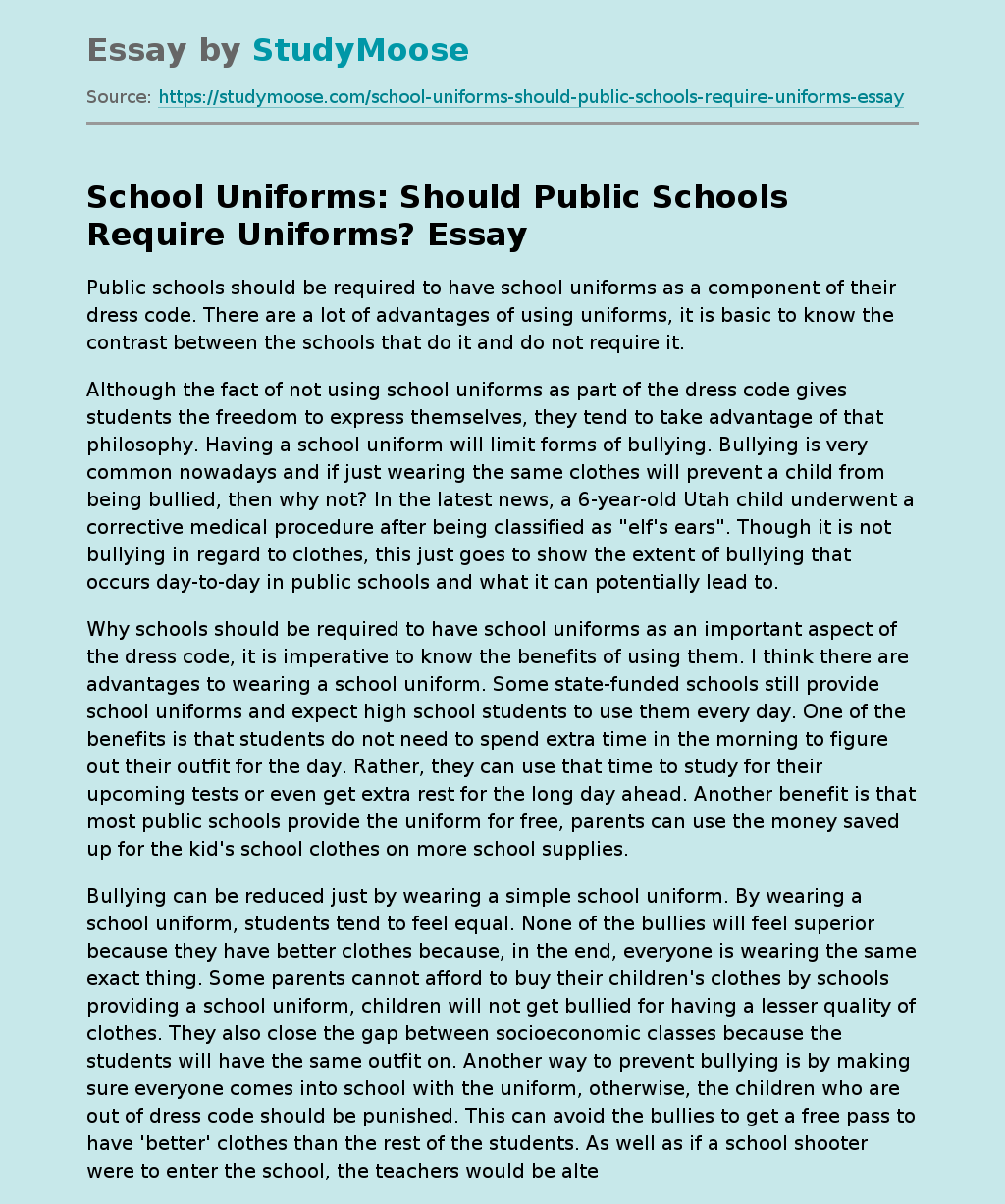