Should School Uniforms Be Banned

School uniforms have an impact on the lives of practically each and every student given that it is a universal practice to wearing uniforms. The wearing of uniform in schools is a controversial topic in our society, and is constantly undergoing debate.some people are for it whilst others especially young people who go for the trendy clothes think that the uniforms do not allow them to express themselves through their clothes and fashion.

One of advantages is that school uniforms create unity within a school, consequently reducing conflicts, bullying, and crime.

Don't use plagiarized sources. Get your custom essay on
“ Should School Uniforms Be Banned ”
Get custom paper
NEW! smart matching with writer

The uniforms eliminate a source of differences among students therefore instilling a feeling of belonging to everyone around one another and no sense of an outsider as the uniforms present equality. When one feels equal to another there is no sense of intimidation of style or fashion towards one another but shows unity. For instance Schools report that school uniforms decrease fighting and violence that arise out of arguments over fashionable clothes.

It would also alleviate the stress imposed on parents to purchase expensive, name-brand clothing. Another argument that is in favour of uniforms is that it restores order and discipline in schools. You can find more information at this link: Argumentative essays.

The adoption of school uniform policies can promote school safety, improve discipline. A school uniform makes it easier for the school authorities to recognize students belonging to their school. Students are identified by their uniforms and would most give a second thought if they want to break a school rule, for example, smoking while being seen in uniforms.

They would lower the dignity of their uniform. Hence, in this sense students wearing their uniform, identify with their school and the wearing of it fosters discipline. Moreover, a fixed dress code helps the students perform academically better. Rather than deciding their wardrobe, students would concentrate more in their studies. . School uniforms may also provide a way out for poor children who otherwise could not keep up with the trends and would face ridicule or pressure from other children.

One of the constraints of many families is the lack of financial means of purchasing uniforms year in year out. This adds considerable financial burden on many families which creates additional pressure on students. The success rate of many schools is relatively low notwithstanding the fact that children wear uniforms even those students that come from well-to-do families. In contrast, many students who do not have the means to wear uniforms perform very well and shows that success comes to all those who dare and act. In addition, the soaring rate of bad behaviour of many students at school despite wearing uniforms shows that they are least bothered to respect their peers and elders and honour the dignity of their school. Moreover, the ill effects of school uniform are that it deprives students of their comfort, which they experiences on wearing different type of clothing. This discomfort might adversely reflect upon the academic performance of the student. They can get bored of wearing the same type of clothes everyday to school and limits the degree of diversity in terms of colorful offering of the school. Furthermore, school uniforms can deprive the children of their sense of individuality and suppress them of their own identity. Many students believe that the wearing of uniforms deprives them of their right to wear what they desire.

It is a matter of fact that school uniforms have influenced the lives of millions of pupils around the world. Banning of uniforms would cause serious disruptions in students’ lives as it is an ever-present visual reminder to pupils of the rules to be abided in schools and their sense of belonging. However, wearing of uniforms is not a recipe for success. Many children who do not have the means to wear uniforms and who come from less well off families have shown that it is not an obstacle to achieve the highest level of academic achievement. Consequently, wearing uniforms is a matter of adaptation to given circumstances without ignoring the fundamental principles of any student life such as discipline, respect to others, aiming for excellence and good behaviuor should be the cornerstone of their actions.

. it eliminates the pettiness of the newest trend and gives more room for school related ideas ‘

Should School Uniforms Be Banned. (2016, Apr 04). Retrieved from https://studymoose.com/should-school-uniforms-be-banned-essay 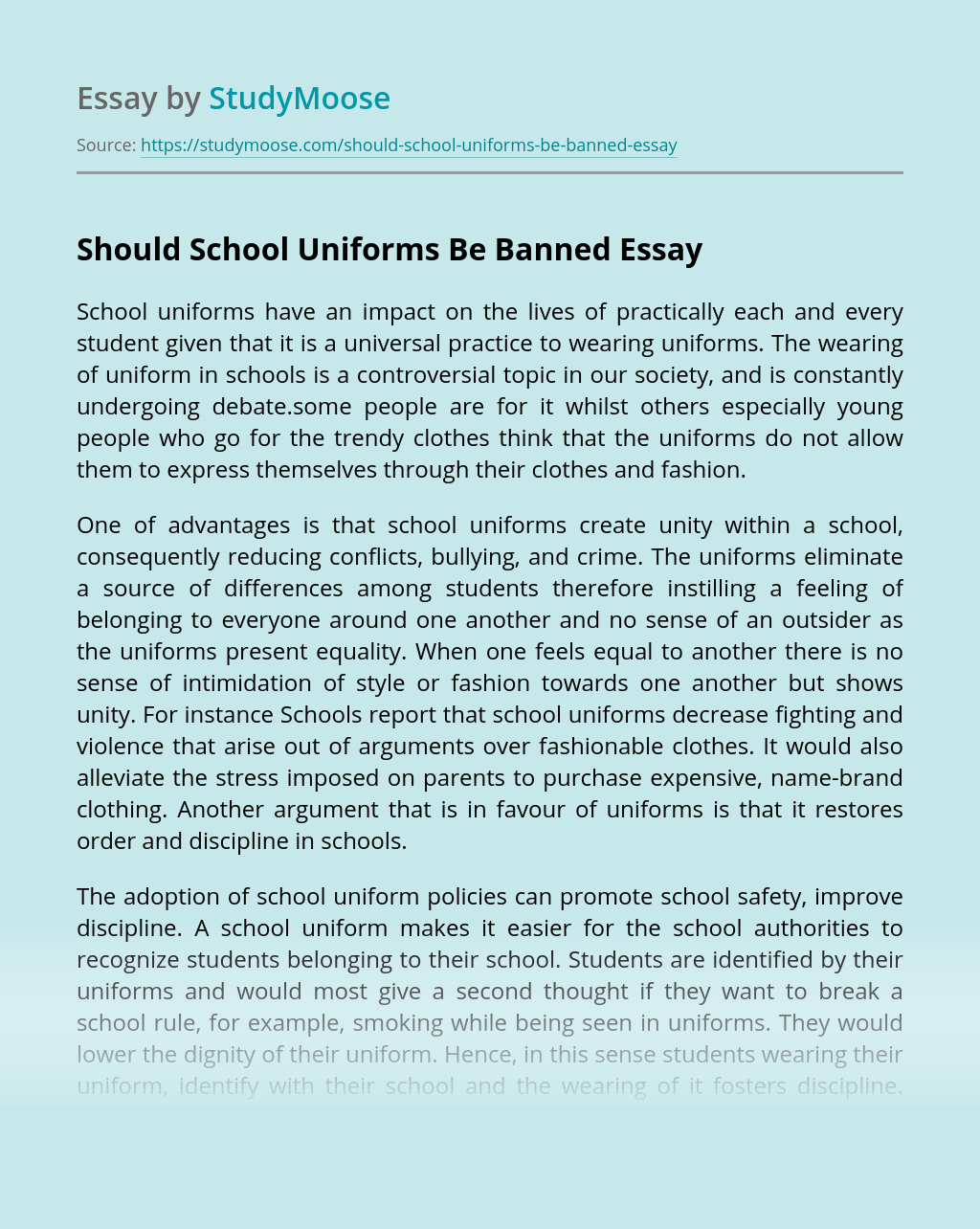