In George Orwell’s Animal Farm which is on the subject of the existence of a society of animals living on the Manor Farm.

Don't use plagiarized sources. Get your custom essay on
“ Seven Commandments of Animal Farm ”
Get custom paper
NEW! smart matching with writer

One first thinks that this novel is about the animals living in a farm from the title. But as the story goes on, it gradually begins to make the readers understand the depth content of the workings of society in Communist Russia. George has accurately compared the society of human to the animals to the animals living in the Manor Farm. In this novel, author has compared the Russian revolution, where animals represent the significant personage and act as the leaders in the Russian Community. Animals are used to demonstrate the operation of the communist class system and how the citizens(people) respond to this and the effect of the leadership by early Russian leaders such as Stalin on the behavior of the people of Russia. For instance, the Old Major makes the speech to other animals about the idea of revolution.

Since he dies before the beginning of the revolution, it could be compared to the Karl Marx, whose ideas set to the Communist revolution in motion. The seven commandments are consider as one of the important step in the revolution which changed by the rulers of the Farm. This paper talks about how the seven commandments were altered during throughout the story and whether it reflects the message of the Communist Manifesto.

After the rebellion took place in Manor Farm, it changed to Animal Farm where the set of laws was introduced to the citizens of the farm by the leaders.

The set of laws which are known as The Seven Commandment are said to be “form an unalterable law by which all animals on Animal Farm must live forever after.”(Orwell) These Commandments were so important that they were painted by Snowball and Squealer “in giant white letters that could be read from thirty yards away.”(Orwell) The original Seven Commandments ran as:

Whatever goes upon two legs is an enemy.

Whatever goes upon four legs or has wings, is a friend.

No animal shall sleep in a bed

No animal shall drink alcohol.

No animal shall kill other animal.

No animal shall wear clothes.

All animals are equal.

These commandments were to be followed by all the animals living on the farm at all times regardless. As one can think from the reading, the simplest phrase that explains these commandments is “Four legs good, two legs bad.” As time passed by, the commandments were altered by the rulers of the farm. Napoleon (the pig who emerges as the leader of Animal Farm after rebellion) who very cleverly broke the commandment and reintroduced as “four legs good, two legs are better” Even though the first two commandments state that anyone on two legs is bad and should not be allowed in the farm, they were wracked in the first year. Since the pigs started walking on two legs, the first commandment was violated and more over, the hero of the Battle of the Cowshed, Snowball turned into an enemy of the Farm as he was thrown out by Napoleon and allowing trading through Mr. Whymper resulting in violation of commandments .

The pigs moved back in to the farm house which result into alteration of the first commandments. The third commandment restricts animals of the farm to sleep in the bed which was forced to change by Napoleon with the modification of the commandment by adding “with sheets.” After the rebellion took place in the farm, the first commandment overruled which was being “all animals equal.” As we read thru out the story the pigs were keep on changing the “unalterable laws” for their comfort just like we saw above with sleeping in the bed. According to Napoleon, sleeping on beds is not a major change yet it was not allowed earlier since humans lived on the farm slept on the bed. The pigs changed the commandment so wisely that the other animals of the farm didn’t think as the violation of the commandment.

The next commandment to change is “No animal shall kill other animal”. This happens not long after the confessions and executions of animals on the farm that were supposed traitors and in league with Snowball. After these executions, again Muriel, Clover and also Benjamin plus some other animals felt this did not square with this commandment. Once again, the pigs have changed the Commandments in order to justify their actions. The animals read the Commandment they though did not agree, “No animal shall kill other animal without cause”, and then the animals see how really the Commandments had not been violated.

The next commandment to change is when Napoleon abuses his power and made life harder for other animals. The pigs impose more control while reserving privileges for themselves. Squealer justifies every statement Napoleon makes, even the pigs’ alteration of the Seven Commandments of Animalism. “No animal shall drink alcohol” is changed to “No animal shall drink alcohol to excess” when the pigs discover the farmer’s whisky.

One would never think that pigs ever made change to the commandment about the clothes as they were enough powerful to rule other animals. The seventh commandment explains that all animals in the world are treated equally without distinction. Instead of considering the commandments as “unalterable laws,” they were replaced by worthless slogan “All animals are equal, but some are more equal than others,” which is totally opposite to with what they were introduced to other animals.

Orwell has used images to make his argument stronger. He has used events to help readers to understand his thoughts. While reading, we develop a feeling of sadness inside getting attach emotionally to the story. Orwell writes in a way to targets readers emotions because they have the ability to experience and feel the pain suffered by the animals in the farm. The following scene could create a strong sorrow to the readers “So Napoleon, with the help of his dogs, slaughters anyone who is said to be disloyal. The tale of confessions and executions went on, until there was a pile of corpses lying before Napoleon’s feet and the air was heavy with the smell of blood, which had been unknown there since the expulsion of Jones.” To top it off, Napoleon outlaws Beasts of England, which had served as one of the only remaining ties between Animal Farm and old Major?” (Orwell 65).

In conclusion, it is clear that George Orwell intended his novel to allegorically represent the figures and events of the Russian Revolution, and through the characters of Mr. Jones as Czar Nicholas, Old Major as Karl Marx, and Napoleon as Joseph Stalin, Animal Farm makes a profound statement regarding the abuse of power. The animals began their revolution with the best intentions. However, their noble ideas of a utopian society where “all animals are created equal” gradually deteriorated into a totalitarian state with a cruel and unjust dictator which, of course, mirrors the chain of events that turned Marx’s dream of a classless society into the nightmare of Stalin’s ruthless regime. This evil cycle of rebellion, power, and then corruption is best described by Barbara Tuchman: “Every successful revolution puts on in time the robes of the tyrant it has deposed.” 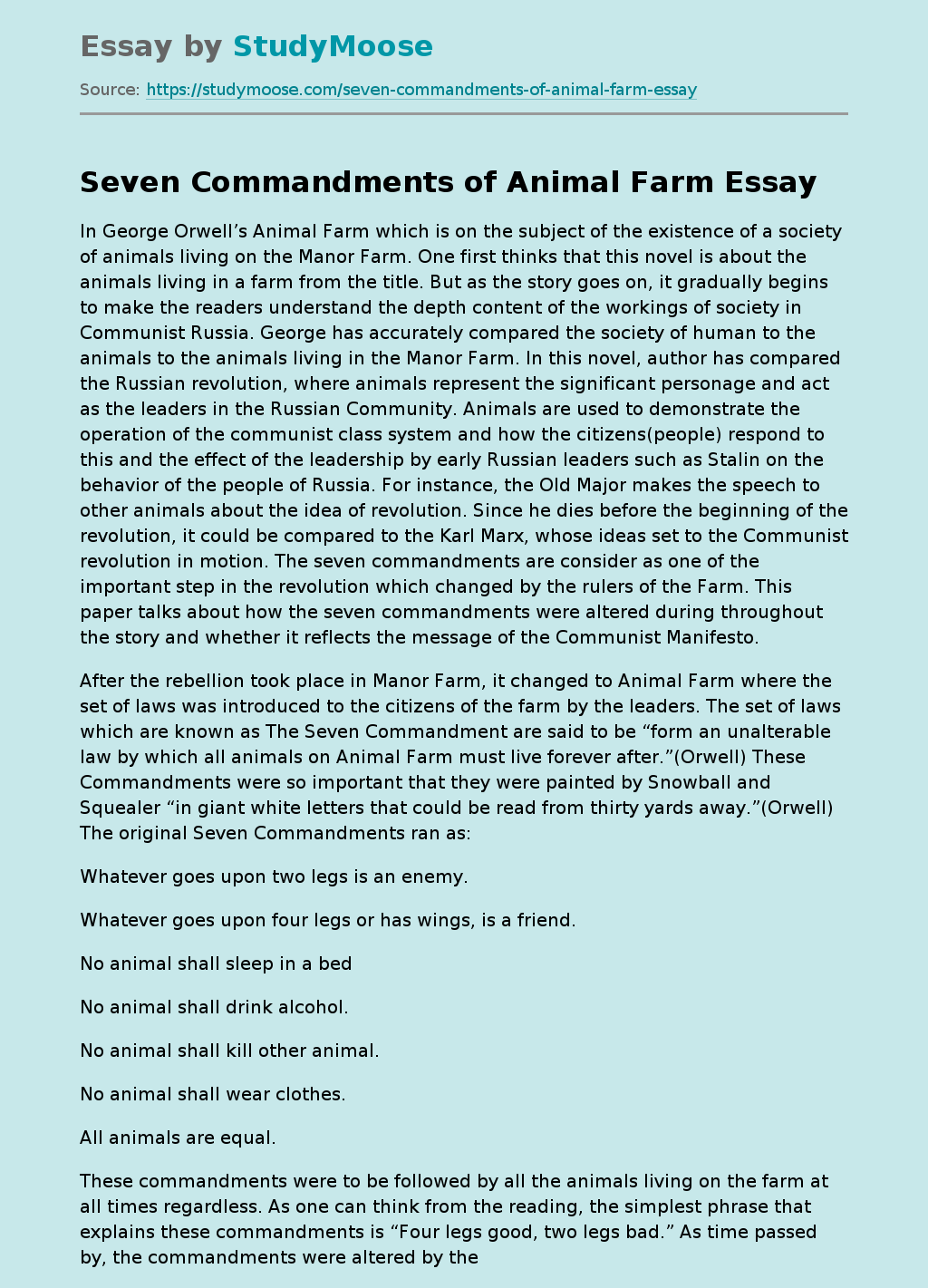