Science Without Conscience Is a Ruin of Nation

The Science Without Conscience Is The Ruin Of Nature The modern age is the age of science. The inventions of science govern our life. At every stage we are dependent on the inventions and discoveries of science. In the every day life of an individual science plays a very important and significant part. The discoveries of science such as electricity, wireless, telephone, railways, airplanes, medicines, etc. are extremely valuable and it is difficult to conceive of modern life without the amenities provided by modern science.

Don't use plagiarized sources. Get your custom essay on
“ Science Without Conscience Is a Ruin of Nation ”
Get custom paper
NEW! smart matching with writer

But when scientific inventions are used without conscience they are likely to send the humanity to its doom.

Hence what is urgently needed is that the scientists should employ their scientific inventions with caution and care so that mankind may not have to suffer as a result of the indiscriminate use of scientific discoveries. Atom is a vast source of energy and if it is employed with conscience for the service of humanity it can be a source of welfare to mankind.

But unfortunately atomic energy is being harnessed without conscience for destructive purposes. Bombs are being made out of this potential energy. The atom bomb was the outcome of the craze of scientists to use atomic energy for destructive purposes. t was used by the Americans in Second world War of 1939-1945 and the two cities of Japan, Hiroshima and Nagasaki, had suffered incalculable losses in men and money due to the conscienceless employment of atomic energy in warfare. It is an admitted fact that scientific inventions, particularly the inventions used in modern warfare, have been employed without conscience in the past and will be employed without conscience in the future unless we go to the root of conscienceless use of scientific weapons and seek to cut t the very root of this wrong basis.

The main reasons why scientific inventions are used root of this wrong basis. The main reason why scientific inventions are used in a conscienceless manner is that nations using them are cut of expansion and aggrandizement at the cost of weaker nations. The lust of territorial expansion and subjugations of weaker powers is the root of this wrong and immortal employment of scientific weapons of warfare. So long as nations will vie with one another in territorial supremacy, and expansion of their sphere of influence, scientific weapons will continue to be employed in a conscienceless and unscrupulous manner by modern warriors.

Another reason for this wrong and unethical use of scientific weapons is a greed and jealousy of big power, who cannot see eye to eye with each-other on international problems, and who have ideological differences dividing them is separable groups. It is this rivalry, strife and hatred that leads warring nations to use fair or foul methods for subjugating and crushing their foes in the war. There are other reasons equally powerful such as ambition for world domination, control of scientific weapons, which lead belligerent nations to the use of scientific weapons in an abashed and immoral way.

If we really want that scenic inventions may not be used unscrupulously and conscienceless to the determent of humanity, it will be necessary to bring about a basis change in the mental attitude of the great powers who are likely to be embroiled in a global war. Great nations should realize that war is not the civilized way of settling international disputes. War is a relic of barbarism and an expression of the instinct of pugnacity rooted in man in a crude form. In civilized society the belligerent instinct can be modified, and peaceful methods can be employed for the settlement of disputes and disagreements among nations.

War would be banned as a means of arriving at solutions of vexing international problems. Only then there is the possibility that scientific inventions will not be harnessed to gain wrong ends, and the brains of the scientists will be used in making discoveries which will ensure the steady progress of civilization. And if war can not be outlawed then at least there should eb a ban on the use of nuclear weapons such as atom bomb and hydrogen bomb in the future worlds. this ban will also provided a check to the conscienceless use of weapons in modern war.

We should learn to use the marvels of science for the welfare of humanity and the progress of our civilization. “The need of mankind” observed Rd. Rajendra Prasad, the Late President of India, “if it is to survive, is to hark back to the supremacy of the moral law and to take the path of self-conquest. Without taking a moral view of life, we cannot properly use the inventions of science for the welfare of humanity. Science grounded in spirituality and not in materialism can alone bring about the salvation of the human-race”.

Science Without Conscience Is a Ruin of Nation. (2020, Jun 02). Retrieved from https://studymoose.com/science-without-conscience-is-a-ruin-of-nation-new-essay 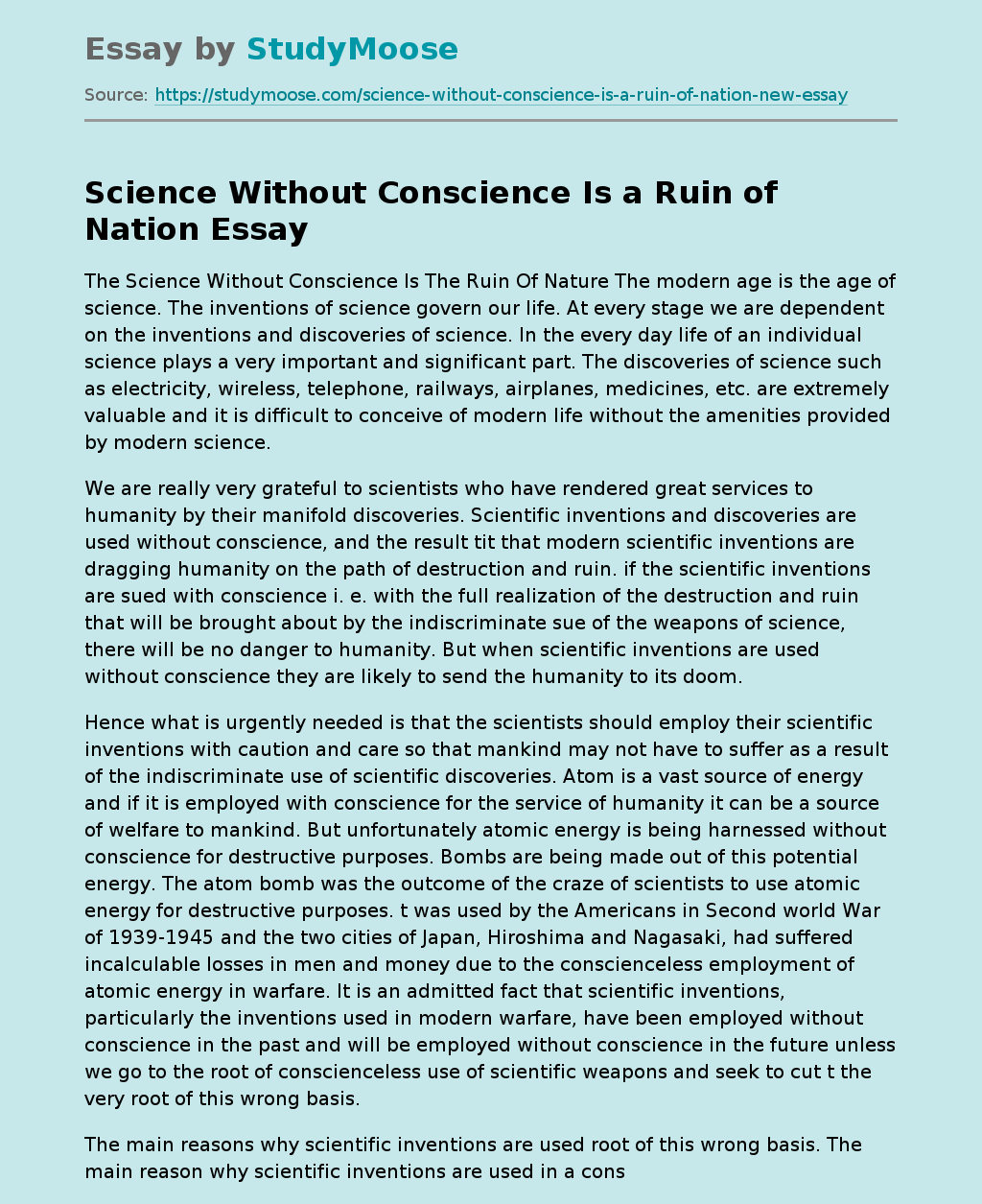