A school leader guides a student for such a brief moment, but is one of the connections that contribute to a student being successful and allowing for the student to transition easily in the learning environment? According to the recommended readings there is a correlation between the student’s home, community, and the school that facilitates the student’s transitions into and throughout the school system, leading to an environment that supports student success. There are several major transitions starting with kindergarten and progressing to the middle school level, and then onto high school.

Don't use plagiarized sources.
Get Your Custom Essay on School and Communities Just from $13,9/Page

Each transitional time is critical and requires additional support to continue and to achieve academically. Based on my review of various articles, the following topics are promising directions that have emerged as areas that will make the connection powerful and successful. Family involvement during Kindergarten preparation is essential for young students to achieve to their potential. The importance of being prepared academically for school, and its implications for parents, has been the subject of extensive research and attention.

One recent study suggests that fostering parent support and parent learning about Kindergarten readiness can help ensure that children are adequately prepared to start school (Starkey & Klein, 2000; Perroncel, 2000). In my readings it was suggested that a network of social connections that support children and families during the Kindergarten transition are needed, including interactions between teachers and children, children and peers, parents and teachers, and preschool teachers and Kindergarten teachers. While there is an increased amount of evidence about the elements that support Kindergarten readiness, there is also a need to better integrate the early childhood development literature to fully understand the connections that make a difference and allow the student to be successful. For example, Fantuzzo et al. (2000) conducted a study to assess parent involvement for children in day care, Head Start, and Kindergarten. Studies such as this can begin to build understanding of how parent involvement changes from pre-school to Kindergarten.

Future research can also build our understanding of the specific types of family and community connections that provide a strong support network for children, particularly those who come from disadvantaged backgrounds, as they prepare to enter Kindergarten. Despite the continued occurrence of the myth that family and community connections are primarily important at the elementary school level, researchers have begun exploring the effects of school, family, and community connections during transitions to middle and high school as well. Gutman and Midgley (2000) found that during the transition from the elementary level to the middle school level, both school factors and family factors were important to support academic achievement in African American students. Another study found that, contrary to popular belief, middle and high school students do want their parents to be involved, especially in terms of homework help and other home-based types of support and involvement (Catsambis & Garland, 1997).

This study found that parent involvement does not decline, as expected, but rather shifts as students move into middle and high school. Although they continued to be involved, parents reported increasing dissatisfaction with their role in relationship to the school, especially involving school policy (Catsambis & Garland). These results confirm the importance of continued exploration of needs that students have during the transition to middle school and to high school, and roles that families play in supporting these transitions. The impact of school outreach is an important finding. School outreach and invitations to families and community members have a significant impact on the level and quality of family and community connections. In at least three studies, it has been found to have a greater impact than family characteristics on previous student academic achievement (Van Voorhis, 2000; Simon, 2000; Chrispeels & Rivero, 2000). Simon found that when schools reach out, and families and community members feel that the school is extending invitations at a personal level, they respond with higher attendance at school-based activities and better quality of family involvement at home.

The unique role that schools play in initiating and setting the tone for connections with families and the community cannot be denied. Researchers have also suggested that more research is needed regards to what motivates individual school staff members to reach out to parents and community and how school staff can be further motivated and supported in building these relationships. There is a growing understanding of the role that relationships between staff in schools and community organizations play in the development of successful collaborations between school and communities. Jehlet al. (2001) suggests that there are “sticking points,” in organizational cultures and values that can hinder school-community connections.

They suggest that these sticking points must be understood and addressed in order to build effective partnerships. These disconnects can be exacerbated by the lack of personal relationships that build trust and understanding between school and community staff (Center for Mental Health in Schools, 1999a). It is clear that family, school, and community connections can benefit children from before the time they enter Kindergarten until after they graduate from high school. Our charge in the educational field of study is to come together to address the issues highlighted in this synthesis paper and to clarify the concept and outcomes of family and community connections with schools. In doing so we will better understand these connections and create the knowledge needed to realize the potential of family, school, and community connections for student learning and student’s success.

School and Communities. (2016, May 14). Retrieved from https://studymoose.com/school-and-communities-essay 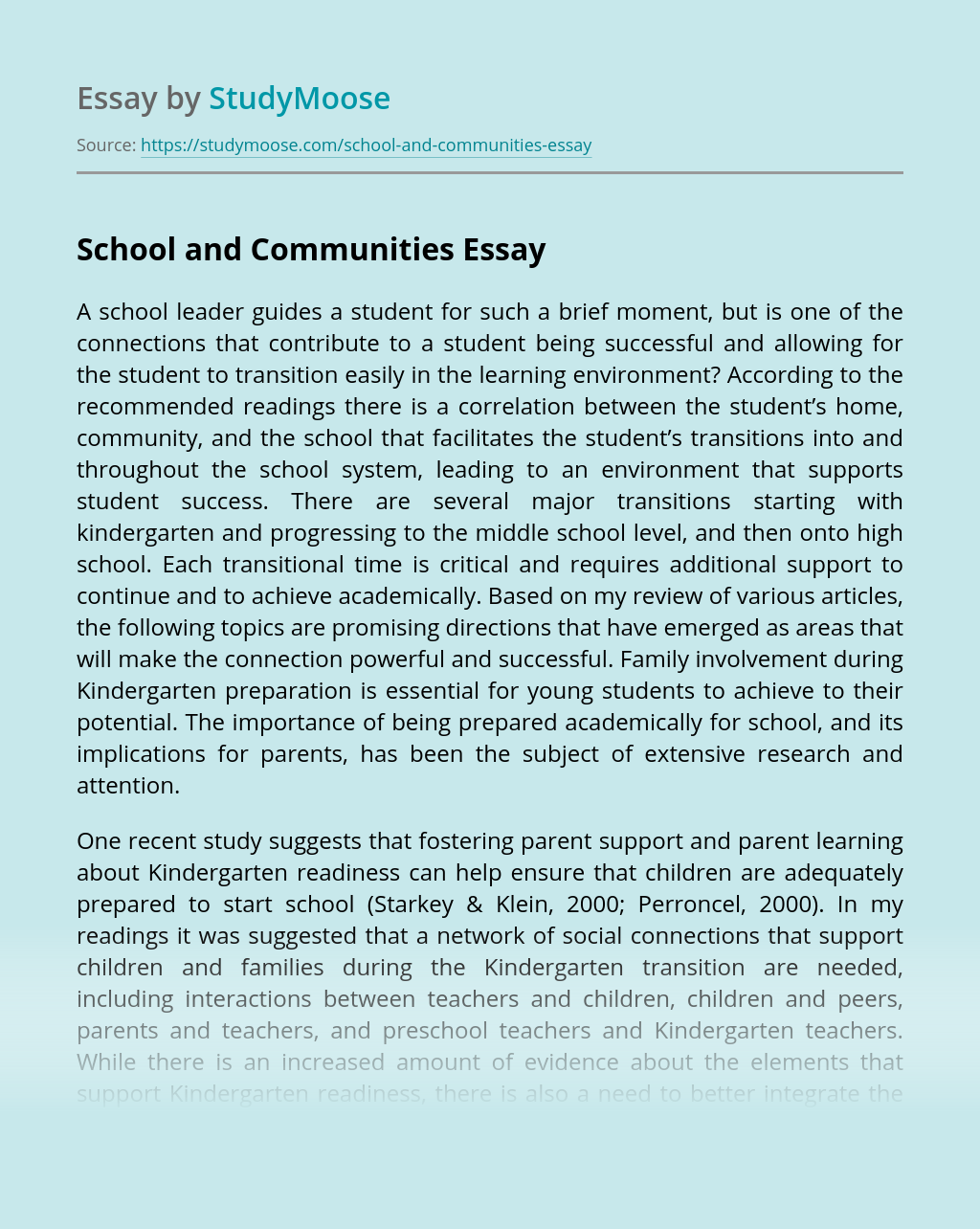 How the Environment plays a role in Learning

Learning is a process which touches on almost every aspect of human life. Surprisingly, it is through learning that the experiences of the past are passed on to the younger generation by parents as well as educators. It is impossible to get knowledge without learning. Apart from knowledge, learning equips people with skills and abilities...

Japanese designed site meant for starters in English language. In it are so many great links that are not only useful but also interesting to kids and other ESL learners. The reason for making it interesting is that kids may get bored if the material is not appealing to them. This site is maintained by...

View sample
Features of an environment or service promotes

Play areas both indoor and outdoor always attract children and is an excellent source to encourage them to use their learning senses, abilities and skills. Number of different entertaining and creative play opportunities should be provided by the practitioners which make these areas interesting and virtually appealing. Practitioners and play areas should be well planned...

The word reflection has been used consistently throughout our first module and has been seen to be prerequisite of good teaching and development. Reflecting itself has been a very useful practice. Taking the time to observe and analyse, whilst using a detailed checklist has also enabled us to use this process correctly. I have found...