Romeo and Juliet: Who is to Blame

Topic Sentence: Who, in your opinion, is most to blame for this tragedy? One of Shakespeare’s most known plays is the love story between Romeo and Juliet, which ends up as a tragedy. There are many different reasons and causes to why this tragedy occurred between the two young lovers, Romeo and Juliet, Friar Laurance, their parents and also the element of fate. Romeo and Juliet are two young lovers who seem to rush the love between each other by becoming married to after only a matter of hours of knowing each other.

Don't use plagiarized sources. Get your custom essay on
“ Romeo and Juliet: Who is to Blame ”
Get custom paper
NEW! smart matching with writer

Friar Laurence who should have been smarter in his actions by marry the two which ending up causing this tragedy, also both Romeo and Juliets have a role that ended up causing their children a tragic end. . Finally, the element of fate comes into play we realise that their tragic deaths may have been predetermined and would be unchanged even if they decided to act differently to what they did.

Romeo and Juliet contribute to their tragic end.

Both Romeo and Juliet are two young teenagers who rush there love between each other and make important decisions without proper thought to what the consequence might be. Romeo and Juliet are both too naive and do not realise nor think about their actions before actually doing them. ‘ Had I ever loved before? ’ Romeo says this when he first lays eyes on Juliet, without even properly meeting her he is already madly in love with her. This is simple naivety, which causes both Romeo and Juliet not to think about their actions and results in the ultimate sacrifise, their own lives.

As for Juliet who has never felt love before, shows how naive she really is by just thinking that she is in love without experiencing it before meeting Romeo. Due to Romeo and Juliet’s naivety and lack of thought, contribute massively to the tragedy that they both suffer. The Montague’s (Romeo’s family) and The Capulet’s (Juliet’s family) have been feuding for decades and has become as bad as them trying to kill each other when they see each other on the streets. This relationship between the two families cause a major problem between Romeo and Juliet when they first realise who their families are.

Friar Laurence ends up making four fatal mistakes, he gave a poison to Juliet, he trusted someone else with a letter of great significance to deliver to Romeo, he married the two and he fled when Juliet was in the most danger at the tomb. His biggest mistake was the horrible advice and decision making that he made when he first found out about Romeo and Juliet’s secret love for each other. Both Romeo and Juliet were too naive to understand the full extent of the situation, however Friar Laurence being a much older man with much more wisdom and knowledge acted in a way that ended up causing the tragedy to occur.

If he had been wiser and gave both Romeo and Juliet advice that they needed and not gone along with their plan to un-thought plan, the end up result would have been different. Fate is a major element in the play Romeo and Juliet. The element of fate is a power that predetermines events in your life and is unchangeable or is certain destiny. It is irreversible. From the first page of the play we hear about fate, Romeo and Juliet are mentioned as `star-crossed lovers’ meaning that fate will bring them together.

It also says that their love is `death mark’d’ which means that their fate will be tragic. This suggest to us that the end up result was always going to be the same no matter of what different actions Romeo and Juliet made. The Fate of Romeo and Juliet’s love could also be questioned as unlucky and coincidental. The Montague boys are accidently invited to the Capulet’s “feast” were Romeo and Juliet meet. Friar Laurence’s second letter is never sent to Romeo because Romeo’s cousin reaches Romeo before the letter ever has a chance.

Romeo arrives at the tomb just before Romeo sees Juliet waking up and kills himself think she is dead, which results in Juliet killing herself. In conclusion I believe that Friar Laurence is mainly to blame for this tragedy between Romeo and Juliet. Both Romeo and Juliet were just too naive to think about their actions full effect, when Friar Laurence who is a much older and should have been much wiser did not think of the consequences when he really should of and gave them both horrible advice. That is why a believe Romeo and Juliet’s tragedy is to be blamed on Friar Laurence’s actions.

Romeo and Juliet: Who is to Blame. (2017, Feb 09). Retrieved from https://studymoose.com/romeo-and-juliet-who-is-to-blame-essay 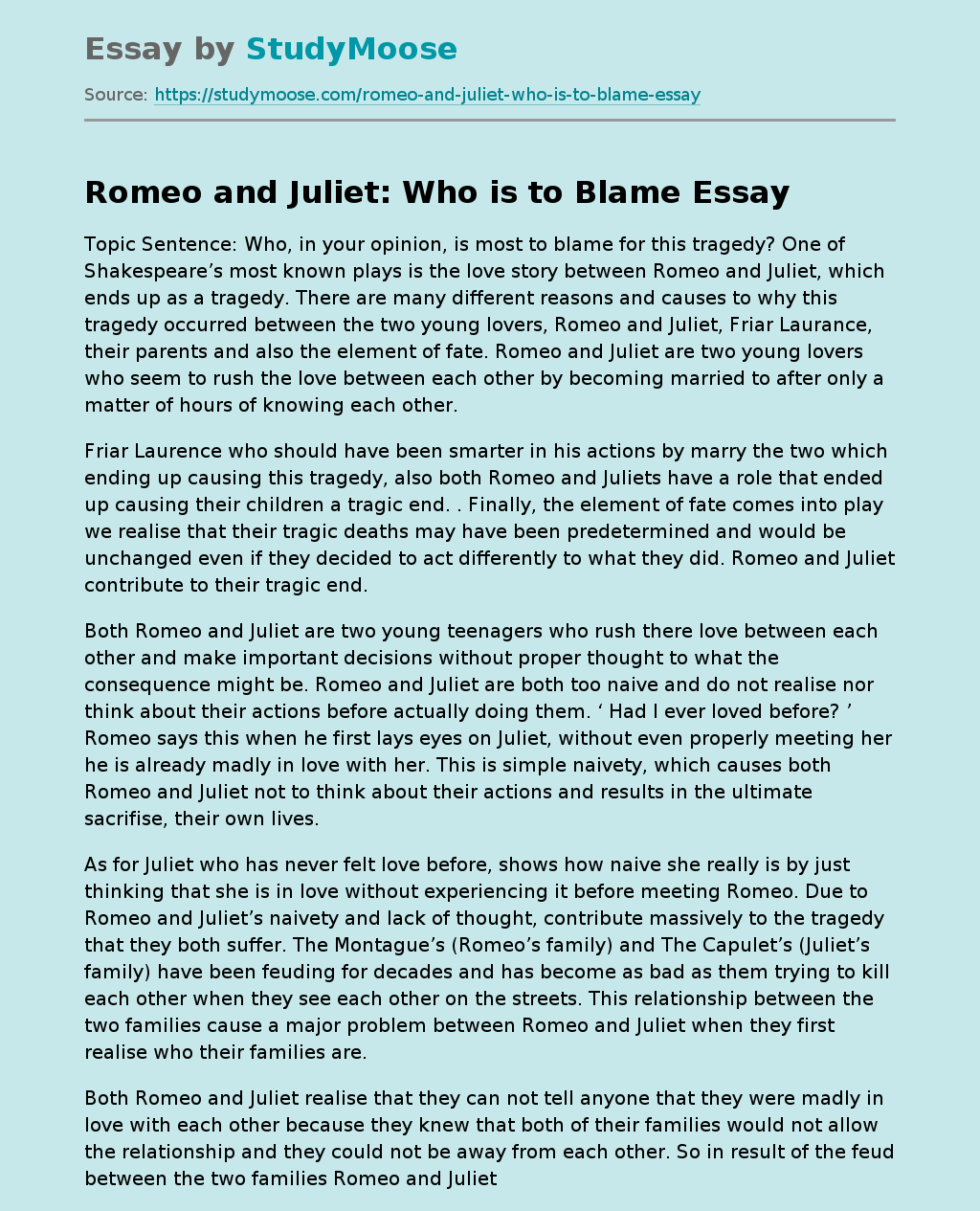