Friar Lawrence Is to Blame for Death of Romeo and Juliet

Don't use plagiarized sources. Get your custom essay on
“ Friar Lawrence Is to Blame for Death of Romeo and Juliet ”
Get custom paper
NEW! smart matching with writer

Is loathsome in his own deliciousness, and in the taste confounds the appetite: Therefore love moderately: long love doth so, too swift arrives as tardy as too slow.” When he says this, he is giving Romeo a warning.

Also, Friar Lawrence should have known at the time, that Romeo was loving with his eyes and not with his heart. For example, Romeo was in a relationship with Rosaline, before marrying Juliet. In conclusion, the Friar did not have the expierence to know that they were kids. The Friar thought that this marriage will end an ancient grudge of two prominent families, when it will only separate them even more.

Friar Laurence was helping Capulet and Lady Capulet mourn over Tybalt’s death. Paris says, “With these times of woe afford no time to woo!”. If everything was thought about clearly and not rushed through then none of this would have happened and Romeo and Juliet would not have died such a tragic death. Another example of the Friar lying is by not telling Montague and Lady Montague of Romeo and Juliet’s elopement. This only made matters worse, and now both Romeo and Juliet are dead. The Friar made this marriage a huge mistake, and he could have stopped the whole thing right there and then by just saying no.

The bad advice keeps coming. Hold, daughter. “I do spy a kind of hope, Which craves as desperate an execution, As that is desperate which we would prevent. If, rather than to marry County Paris,”When Juliet turns to Friar Lawrence in desperation because her parents are forcing her to marry Paris, the Friar concocts the crazy scheme for Juliet to fake her own death. He tells her that if she has the strength to take her own life rather than marry Paris than she should have the strength to pretend she’s dead to avoid the love of another man. She put her neck on the line with the help of a coward. Another example, of the Friar’s selfish intentions, is the tomb scene,where-upon finding Juliet in there, and two dead bodies lying on the floor, he needs no persuasion to leave, which he does so in immense. Hence, the Friar did not understand how to be a leader and did not follow through.

Friar Laurence largely contributed to the deaths of Romeo and Juliet by marrying them despite their parents, giving Juliet the poison and by not thinking things through clearly. Instead, he always tried to find a “quick-fix” solution. However, he has a kind disposition and honestly tries to help Romeo and Juliet in whatever way he can. This confession, added to the tragic deaths of the young lovers, ceased the age-old fight between the Capulets and the Montagues.

Vial many have said this was the cause of their death but i disagree. it was rather the schemes and plans of friar lawrence who conducted the vile and who caused the deaths of poor romeo and juliet. exhibit B – remeber this letter which outlines all the details of the plans that friar lawrence and juliet made & also contains letter to romeo about plan.

Overall, I would say it is Romeo’s fault the most. It is understandable that their parents didn’t let them marry because of the grudge between the families. If their wasn’t this grudge, they wouldn’t have died but the parents didn’t know. Romeo on the other hand, should have known what would happen. Even when he saw Juliet pretending to be dead, he should have waited and called for help or friends instead of killing himself immediately.

Friar Lawrence Is to Blame for Death of Romeo and Juliet. (2016, Mar 12). Retrieved from https://studymoose.com/friar-lawrence-is-to-blame-for-death-of-romeo-and-juliet-essay 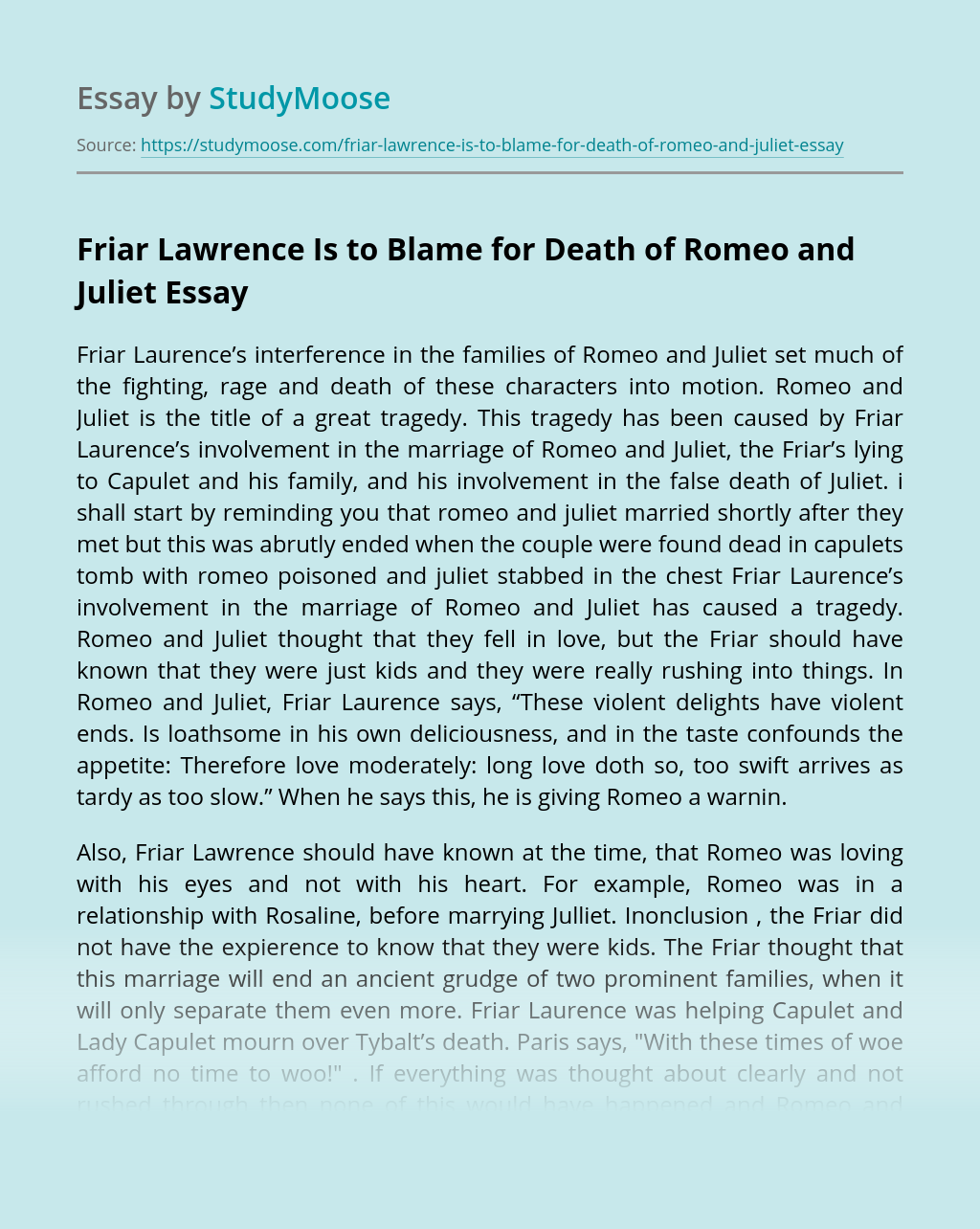