Why Friar Lawrence is Responsible for the Deaths of Romeo and Juliet?

In William Shakespeare’s tragedy, Romeo and Juliet, the character that is most responsible for their deaths are Friar Lawrence; he married them the day after they met, even though he was aware of the rivalry between the Montagues and Capulets, and he develops a bad plan to reunite them after Romeo’s exile, even leaving Juliet right before she kills herself. The Friar’s decisions ultimately led to the tragic demise of the two young lovers. When making large decisions that will surely affect many people in the future, it is thought that people should usually consult someone or ask for another opinion.

Don't use plagiarized sources. Get your custom essay on
“ Why Friar Lawrence is Responsible for the Deaths of Romeo and Juliet? ”
Get custom paper
NEW! smart matching with writer

When that decision is made on a whim with no previous thought or care, unfortunate things happen. The friar is shortsighted and marries them in order to hopefully reunite the two families, he goes and marries the two the night Romeo asks. Some may think that even though the Friar’s main want to marry them is to connect the families, he still thinks that there are no dangers to their marriage, but I think that if he didn’t marry them, the problem would have never existed.

The friar marries the two lovers on the spot without thinking about the negative effects of their marriage. Lawrence’s true want to marry the two comes from his desire to unite the two families, capulet and Montague. When discussing Romeo and Juliet’s marriage, the friar says the following, “For this alliance may so happy prove/ To turn your households’ rancor to pure love” (2.

3.91-92), showing that the friar’s main intention is to unite the families and not to unite Romeo and Juliet. On the other hand, the friar knows that if he marries them that it is possible for there to be some negative effects, and it is his responsibility to stop the marriage from happening because he is the friar, and Romeo came to him to get married.

Later on, the friar says “These violent delights have violent ends/And in their triumph die, like fire and powder, /Which, as they kiss, consume. /The sweetest honey/Is loathsome in his own deliciousness/And in the taste confounds the appetite./Therefore love moderately./ Long love doth so./Too swift arrives as tardy as too slow”(2.6.10-15). He essentially warns them that taking their love too fast is dangerous. Even though he knows the dangers of marrying them, he does it anyway. The friar is also aware of Romeo’s past relationship with rosaline and how he tended to focus on beauty and not their actual connection, this is why his relationship with rosaline ended poorly and I believe that the friar assumed this with Romeo and Juliet.

When talking about Juliet Romeo opens with ” she doth teach the torches to burn bright!” After, he uses dialect such as ” Like a rich jewel in an Ethiope’s ear;” and “Did my heart love till now?” and “I ne’er saw true beauty till this night.” Romeo is completely consumed with the sight of Juliet. Romeo explains how beautiful Juliet is to him when talking with the friar, in turn, he should know not to trust this relationship yet. In conclusion, even though the friar did initially have doubts about marrying them for their sake, he did it anyway which makes him at fault. Without the friar marrying the two, they wouldn’t have met their awful demise. In the end, Friar Lawrence is the person in this story that makes Romeo and Juliet a tragedy.

Why Friar Lawrence is Responsible for the Deaths of Romeo and Juliet?. (2020, Sep 06). Retrieved from http://studymoose.com/why-friar-lawrence-is-responsible-for-the-deaths-of-romeo-and-juliet-essay 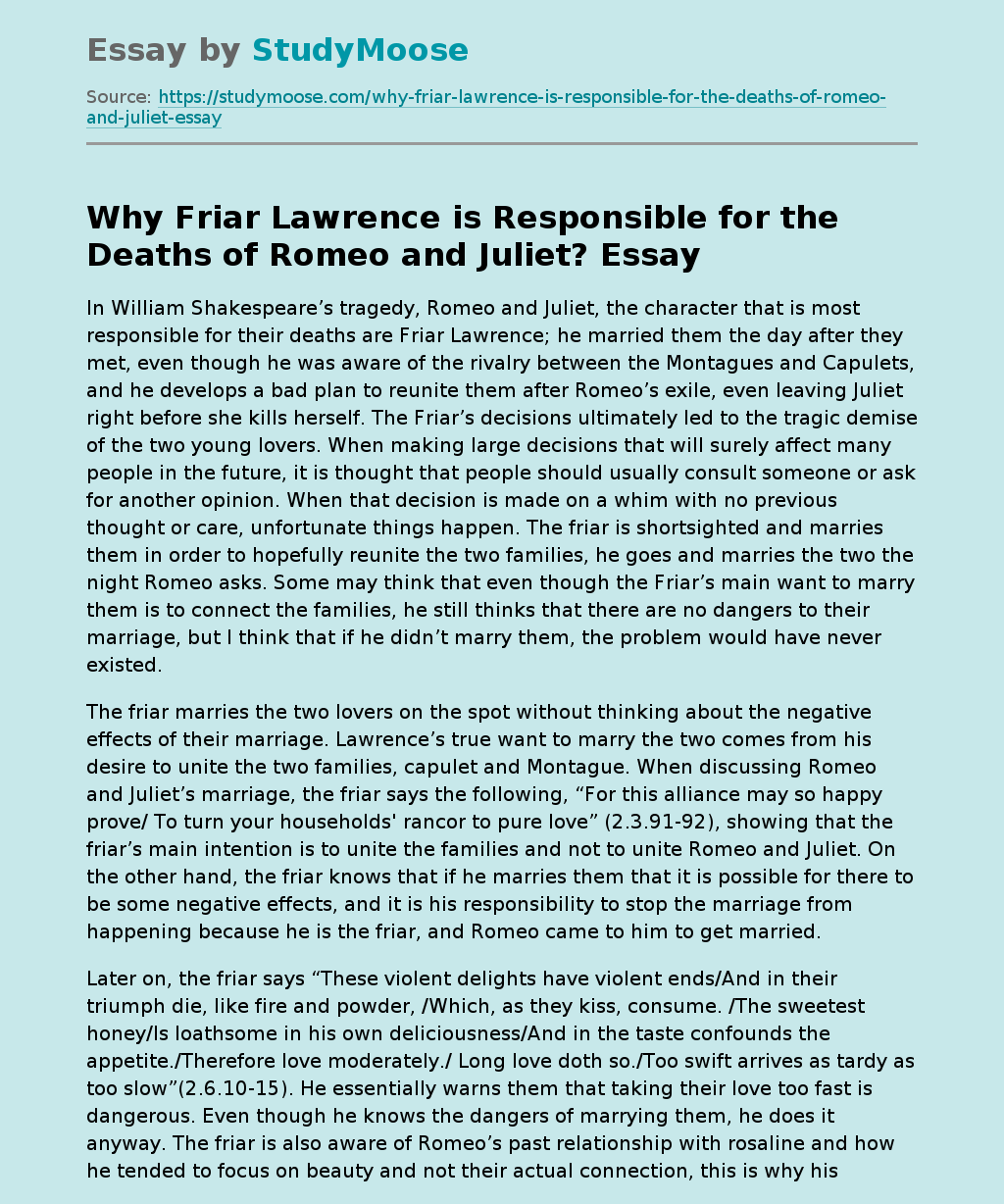