Friar Lawrence Causing The Deaths of Romeo and Juliet

Romeo and Juliet is a Shakespearean tragedy in which two teenagers, Romeo and Juliet, fall in love with each other in the midst of enmity of two families, Capulet and Montague. Juliet is a Capulet, and Romeo is a Montague. They marry without their families knowing, with the help of Friar Lawrence. Then Romeo kills Tybalt in the middle of a street fight in which he was trying to prevent Tybalt and Mercutio from fighting. For killing Tybalt, Romeo is banished from the city by Prince Escalus.

Don't use plagiarized sources. Get your custom essay on
“ Friar Lawrence Causing The Deaths of Romeo and Juliet ”
Get custom paper
NEW! smart matching with writer

Friar Lawrence comes up with a complicated plan to get them together, which involves Juliet fake-dying, and Friar Lawrence sending a letter to Romeo that Juliet is not actually dead. Romeo does not receive that letter, though, and commits suicide because of grief. Juliet wakes up, and seeing that Romeo is dead, also kills herself. This is one of the most known Shakespearean plays written, and half of the other dramas in the world are based on this one.

But at the play’s close, readers are left wondering who or what is to blame for the death of Romeo and Juliet. Upon further reflection, it is clear that Friar Lawrence is the one to blame for the untimely deaths of the young lovers. First of all, Friar Lawrence easily could have prevented the deaths of both of Romeo and Juliet by not keeping the marriage private, and announcing it to the public. If Friar Lawrence did that, both the Montagues and the Capulets would have made peace, and then the street fight where Romeo killed Tybalt would not have happened, and consequently, then Romeo and Juliet would not have committed suicide.

To quote this, Friar Lawrence says “For this alliance may so happy prove to turn your households’ rancor to pure love.” in act 4, scene 2. In simpler terms, “may this alliance break apart the hatred of both of your families and turn it to pure love.”

This means that Friar Lawrence is not acting like a catalyst, he is not taking part in any actions that might have sped up the forthcoming peace of the Montagues and the Capulets. Therefore, Friar Lawrence could have prevented the tragic deaths of both Romeo and Juliet. Second of all, Friar Lawrence could have written and delivered the letter to Romeo himself, instead of entrusting other people with it to ensure that Romeo received the letter. Friar John, the man expected to bring the letter “could not send it…nor get a messenger to bring it…so fearful were they of infection” (act 5, scene 2, line 2915). Because of the quarantine keeping the information from Romeo, Balthazar sped to Romeo, and told him of Juliet’s ‘death’. If Friar Lawrence had given the letter to Romeo himself, this way, he would have prevented Balthazar from telling Romeo that Juliet was dead, and then Romeo would have not committed suicide.

Having not enough time does not give Friar Lawrence an excuse to not talk to Prince Escalus. This proves that Friar Lawrence could have prevented the deaths of Romeo and Juliet, and he didn’t even try. Lastly, Friar Lawrence gave the sleeping potion to Juliet. This was a risky move, and Friar Lawrence knew that risky moves could cost Juliet and Romeo their lives. Even though, he still made the decision for Romeo. Romeo didn’t know any of this was even happening, and Friar Lawrence took the risk: “Hold, then; go home, be merry, give consent to marry Paris: Wednesday is to-morrow:to-morrow night look that thou lie alone; Let not thy nurse lie with thee in thy chamber: Take thou this vial, being then in bed, And this distilled liquor drink thou off…” (Act 4, scene 1, line 89)

Friar Lawrence Causing The Deaths of Romeo and Juliet. (2020, Sep 06). Retrieved from http://studymoose.com/friar-lawrence-causing-the-deaths-of-romeo-and-juliet-essay 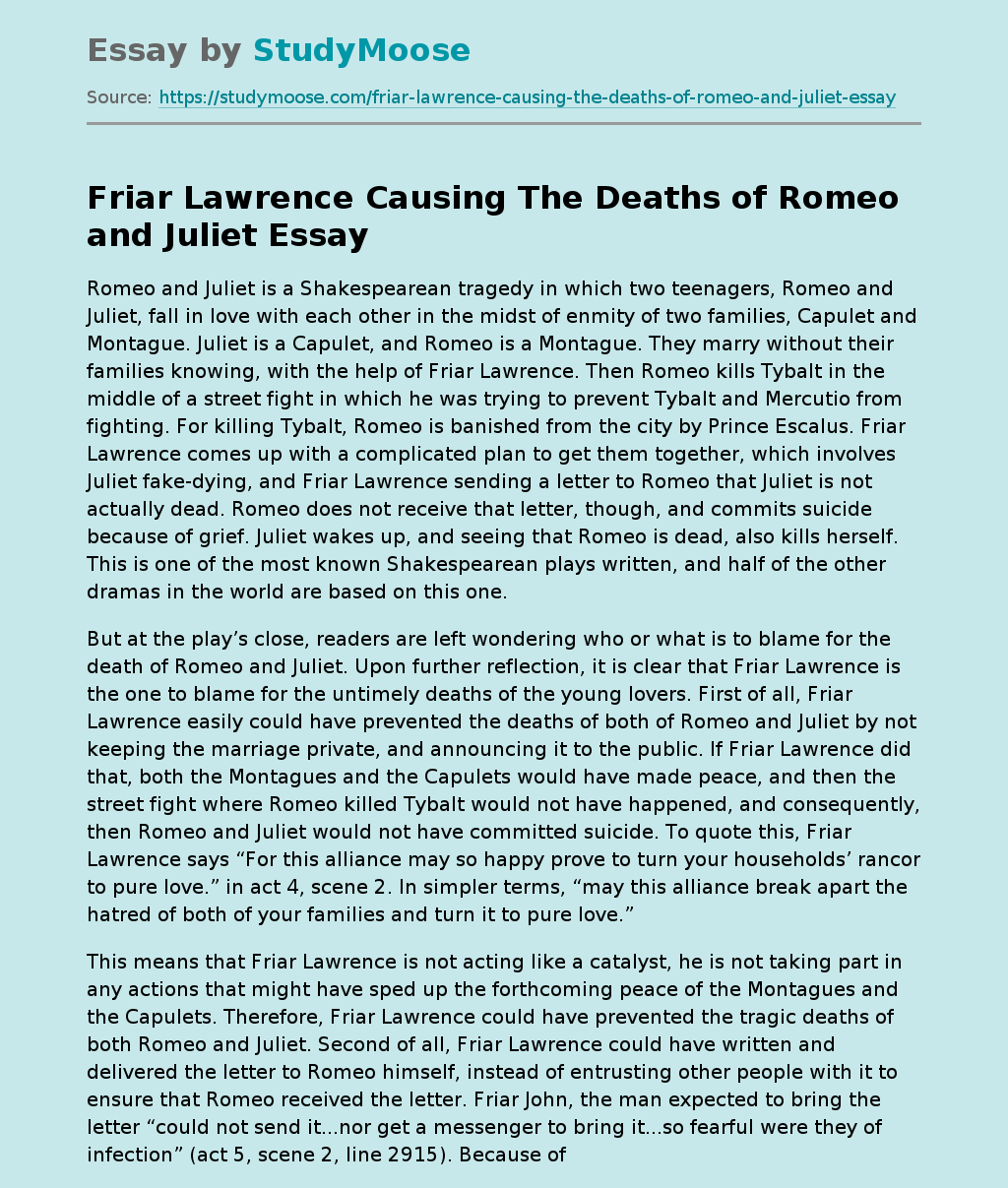