Who is to blame for the deaths of Romeo and Juliet?

I think that everyone is to blame but the people who are most to blame for the deaths of Romeo and Juliet are the Capulet family, Friar Lawrence, the Nurse and Fate.

I think Fate is mostly to blame because it has been against them since the beginning. This is shown at the beginning when Romeo and Juliet are described as “star-crossed lovers”, meaning Fate is against them.

I think that the Capulet family are partly to blame because it was the custom in the 16th century for the daughter to marry whoever the father wishes and also because neither one of Juliet’s parents knew her well.

Don't use plagiarized sources. Get your custom essay on
“ Who is to blame for the deaths of Romeo and Juliet? ”
Get custom paper
NEW! smart matching with writer

This is shown when Lady Capulet wanted to speak to Juliet alone but then calls the Nurse back: “Nurse, give leave awhile, we must talk in secret. Nurse, come back again”. Capulet tells Paris to wait two years this shows him to be caring for Juliet at the beginning of the story and then changes his mind towards the end of the story: “Thursday, tell her, she shall be married to this noble earl”.

The Montague family are partly to blame because they never guided Romeo in anything especially love.

I think that Friar Lawrence is also partly to blame because he should have not married them so soon after Romeo fell out of love with Rosaline. He says “Holy Saint Francis, what a change is here! Is Rosaline, whom thou didst love so dear, so soon forsaken?” but he thought it would be a good idea because he hoped it would stop the feud between the two families: “For this alliance may so happy prove, to turn your, households’ rancour to pure heart”.

He was also pressured to make his plans, meaning that he couldn’t think through his plans to get Romeo and Juliet together and into Mantua, “Which craves as desperate an execution, as this is desperate which we would prevent”.

I think that the nurse could also be partly to blame because she never really gave Juliet any guidance. She liked the idea of Juliet marrying Romeo but warned him not to lead her on: “If ye should lead her in a fool’s paradise, as they say; for the gentlewoman is young”. After Juliet and Capulet argue, the nurse thinks it advisable that she marries Paris because there is no hope for Romeo as he has been banished to Mantua and also to prevent Juliet from being on the street, “I think it best you married with the County. O he’s a lovely gentleman” This showed that the nurse did not think of the consequences before she said this. This would have a really bad effect on Romeo and Juliet’s marriage because Juliet wouldn’t have any time to see Romeo as Paris would probably be with her most of the time.

Escalus is also partly to blame because he did not use his power as prince to calm the feud; instead he issued warnings, such as “Your lives shall pay the forfeit of the peace”. If he had used his power the fight between Romeo and Tybalt could have been avoided, meaning that Romeo wouldn’t have been banished which would have meant that Friar Lawrence’s tragic plan would have been avoided. At the end Esculas starts admitting that he was partly to blame because he said that he should not have turned a blind eye to the feud and he also says that he lost two relatives due to the feud: “and I for winking at your discords too have lost a brace of Kinsman; all are punished.”

Tybalt also has a minor role to play for the deaths of Romeo and Juliet. If he had not had killed Mercutio after the party Romeo wouldn’t have got angry and pursued him and finally kill him and then get banished by the Prince of Verona. This nearly made it impossible for Romeo and Juliet to see each other.

Mercutio is also partly to blame because he should not have invited Romeo to a Capulet party: “Nay gentle Romeo, we must have you dance.” At the party Tybalt spots Romeo: “Tis he, that villain Romeo”. This makes Tybalt angry and he wants to fight Romeo to the death. The next day Tybalt finds Romeo, Mercutio and Benvolio. Mercutio steps in for Romeo and fights Mercutio gets hit and says: “a plague on both your houses” meaning that he wants both houses to be killed. Tybalt runs off and Romeo pursues him. They both fight and Romeo kills Tybalt. The prince arrives and asks Benvolio what happens and then Romeo is banished. All this means that it was partly Mercutio’s fault.

Romeo and Juliet themselves where also to blame because Romeo shouldn’t have pursued her knowing she is a Capulet: “Is she a Capulet? O dear account, my life is my foe’s debt.”.

Who is to blame for the deaths of Romeo and Juliet?. (2020, Jun 01). Retrieved from https://studymoose.com/blame-deaths-romeo-juliet-new-essay 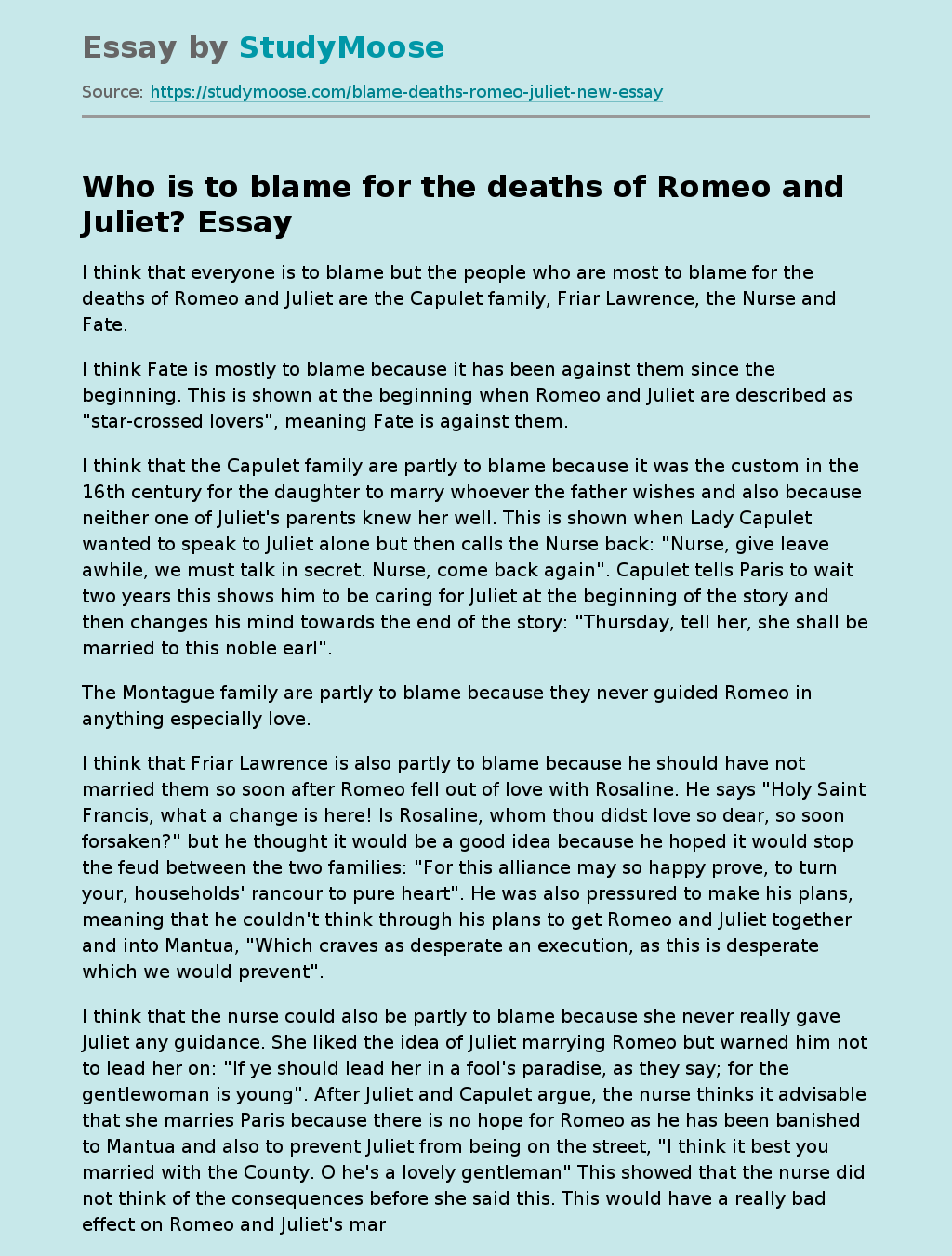