Responsibility in the Deaths of Romeo and Juliet

Romeo and Juliet is a tragedy written by William Shakespeare and performed during the Elizabethan Era. Set in the same Era in which it was written and using many themes that were popular at the time, this play follows the love story between Romeo and Juliet, which ends with their suicides after they realize they cannot be together. While Romeo and Juliet are partially responsible for their demises, ultimately it is other factors beyond their control that lead to their deaths.

Don't use plagiarized sources. Get your custom essay on
“ Responsibility in the Deaths of Romeo and Juliet ”
Get custom paper
NEW! smart matching with writer

Many decisions made by Romeo and Juliet throughout the play are irrational and irresponsible, so they are not entirely without blame. Nevertheless, it is the fate that destined their tragic deaths and the hate which permeated their families that culminate in the plays tragic ending. Romeo and Juliet are partially responsible for their demises as many of the decisions made by them throughout the play are made with little planning or forethought.

Shakespeare emphasises the folly of irrationality through showcasing the terrible consequences of poorly thought out plans.

Knowing that their relationship is “too rash, too unadvised, too sudden,” Juliet still wants Romeo to “send [her] word tomorrow” about their marriage. This highlights how Juliet knows there will be consequences if their relationship develops too quickly, but she still rushes her relationship with Romeo. Their hastiness to marry is further demonstrated by Romeo when he asks Friar Lawrence to marry him and Juliet. Friar advises Romeo to be “wisely and slow”, theorising “they stumble that run fast”. Instead of heading the Friar’s warning, Romeo “stand[s] on sudden haste”, revealing his impulsiveness through his unwillingness to listen to others’ advice and consider his decisions more carefully.

Whether thinking more carefully about their marriage could prevent their demises is unknowable, however, getting married so suddenly and secretly is certainly an irresponsible choice to make for both themselves and their families. Shakespeare positions his readers to acknowledge that impulsiveness often leads to demise. This concept is also shown when Romeo again acts faster than he thinks, killing Tybalt.

After Mercutio dies “under [Romeo’s] arm”, Romeo is furious as his “reputation [is] stained” and kills Tybalt. Romeo acts so quickly that Benvolio describes his fight as “lightning” and he “could [not] draw to part them”, displaying how Romeo acts before he thinks. The action of killing Tybalt is unnecessary since “the law should end” Tybalt’s life regardless, Romeo simply hastened the death to no one’s benefit, resulting in his banishment from Verona. This is the primary reason for Juliet’s suicidal thoughts as “to speak that word” is Romeo and Juliet “All slain, all dead”. If Romeo could think more logically before he acts, all the actions that Juliet takes might have been prevented. Overall, Romeo and Juliet’s are somewhat responsible for their demises because their impulsive and short-sighted actions caused a series of problems which ultimately culminate in their deaths. The hatred that permeates Romeo and Juliet’s families is also responsible for their demises as hate sets in motions events that culminate in their deaths and clouds the judgment of wise characters. Hate lies at the heart of every action and it is the root cause of all problems in the play. Hatred is also seen to be problematic as it leads to poor decision making by characters who could otherwise have prevented the tragic end.

For instance, Friar Lawrence does not marry Romeo and Juliet for love, this is clear as he believes Romeo’s love is “not truly in [his] hearts, but in [his] eyes”. He agrees to the marriage because he thinks it could “turn [the] households’ rancour to pure love”, his motivations are thus shown to be the defeat of hate rather than the promotion of love. [NEW LINKING SENTENCE]. In the end, fate is the primary contributor to Romeo and Juliet’s demises as it is clear that fate made their deaths inevitable. Shakespeare makes it clear in the prologue that Romeo and Juliet’s fate is to “take their life” to reconcile their feuding families’ “ancient grudge”. By introducing the concept of “star-crossed lovers” in the prologue, Shakespeare simultaneously makes it clear that there is no possible happy ending for the young lovers while connecting the idea of fate with the symbol of stars. This symbolism embodies how Romeo and Juliet are trapped by their fate, they can no more change it than they could change the stars.

Before Romeo enters the party in Capulet’s house, he fears that there will be “some consequences, yet hanging in the stars” which is “bitter” and will “by some vile forfeit of untimely death.” This clearly foreshadows his meeting with Juliet, starting their love story that leads to death. In this moment, Romeo can sense his own impending end as determined by fate. Fate is further explored when Juliet wakes up in the tomb seeing Romeo dead, and Friar Lawrence laments that ‘a greater power than [he] can contradict’ has ruined his plan. Here, Shakespeare is obviously referencing to fate using ‘a greater power’. This indicates how pointless it is for characters to try to control fate, no matter how motivated they are or how hard they try, it is impossible to change what is predetermined by fate.

Responsibility in the Deaths of Romeo and Juliet. (2020, Sep 06). Retrieved from https://studymoose.com/responsibility-in-the-deaths-of-romeo-and-juliet-essay 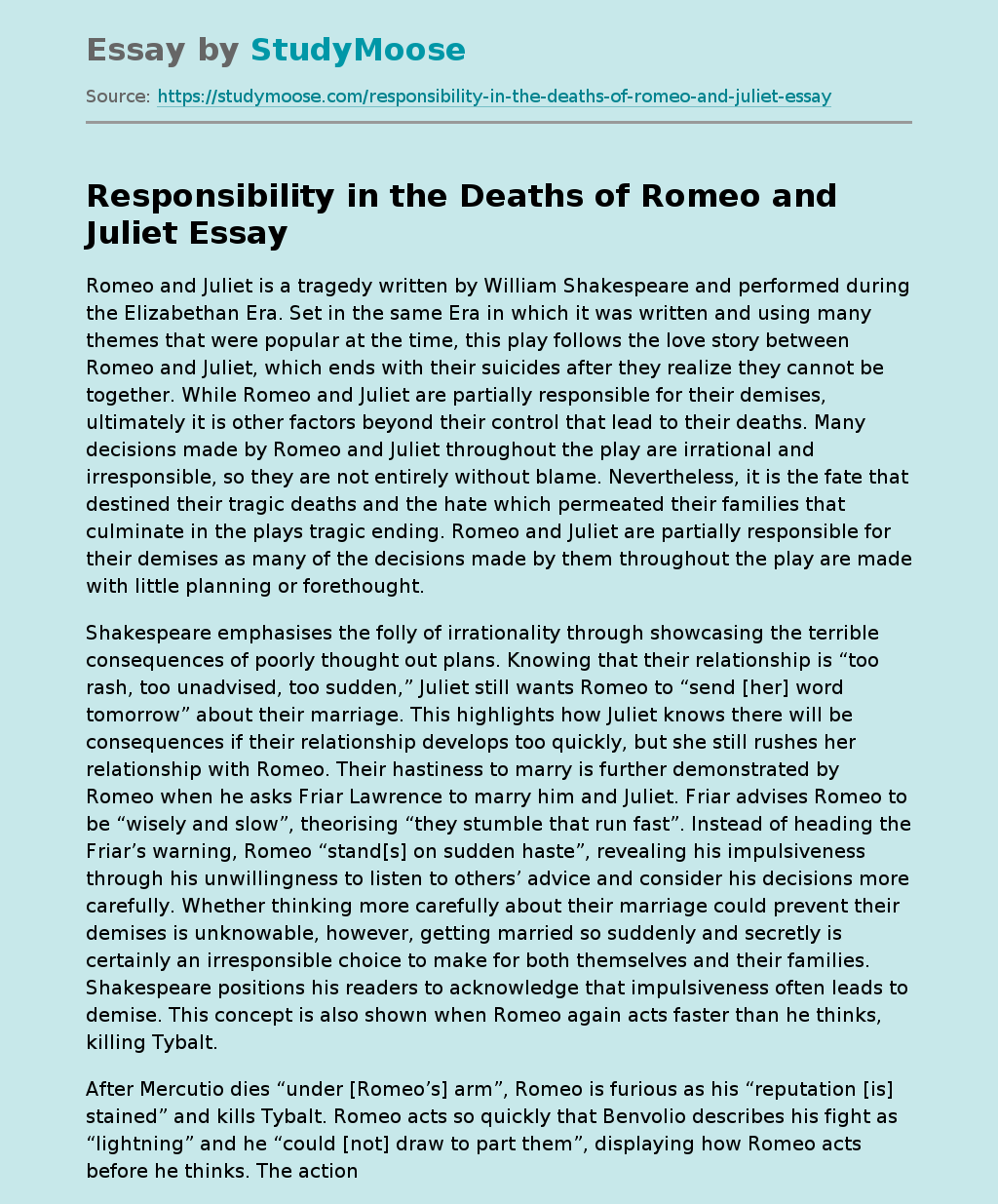