Friar Lawrence is often seen as a character who tragically meddles with events he cannot control. What is your opinion of Friar Lawrence in Romeo and Juliet? What does he contribute to the play? What do you feel are the most important aspects of his role in the play?

Don't use plagiarized sources. Get your custom essay on
“ Friar Lawrence ”
Get custom paper
NEW! smart matching with writer

He is their priest and their role model. But underneath his ceremonial garments he is a man, someone with opinions, desires and fears. I believe that this is what William Shakespeare tried to convey to the audience when he wrote ‘Romeo and Juliet’, that a priest who has a strong and important hold over a community will have to fight to prevent a conflict of interests.

In the city of Verona there is a political feud between two families, the Montagues, Romeo’s Family and the Capulets, Juliet’s family.

This becomes very important later in the play as it drives the Friar to go to the extremes that he does. As the audience we have to believe that the Friar would not like to see anger and hatred in his community and he may have seen his position in the church as a way to stop what is happening. He could adopt many roles like a social manager or a politician.

The Friar’s first speech is rhythmic, rhyming and calm .

The day to cheer and night’s dank dew to dry,

I must fill this osier cage of ours….

Virtue itself turns vice, being misapplied.’

Although this speech seems to present the Friar in a good light, one feels a sense of falseness. The regularity lulls one in to a sense of acceptance. One feels that he is expressing the conventional attitudes of a priest, not his own.

The first speech is very important for the friar. It is a chance for Shakespeare to create their first impressions of the character in the play. This speech establishes a standard for the Friar that he will try and keep up, but sadly does not maintain. The play starts with a strong, formal Priest but the friar later abuses his trusted role.

Shortly after the first speech Romeo informs the Father of his new love for Juliet.

‘Holy Saint Francis, what a change is here!

Is Rosaline, that thou didst love so dear,

is the Friar’s reaction to the news. It questions the sincerity of Romeo’s love for Juliet.

The range of devices that we see the friar use also suggests that he is a practised speaker.

This passage challenges the love of the young Romeo, yet at the same time hints at the extremes to which the lovers will travel. Yet the Friar does rather quickly agree to marry them. In my opinion this is a political decision. It is hard to distinguish in this scene whether the Friar is marrying them because of what he is (a Priest) or what his opinions are concerning the Capulets and the Montagues, therefor acting as a social manager. However, because he knows what he is doing is underhand he marries them in secret.

Romeo later kills Juliet’s cousin Tybalt in a fit of anger, and the Prince banishes him from Verona. Romeo visits his confidant to despair over what has happened, wanting to end his life if he cannot see Juliet again. The Friar calms young Romeo with an ‘ideal solution’ that is made up there and then. He tells Romeo to go to Juliet’s chambers and consummate the marriage, ‘As was decreed’ Really he means ‘as I planned’. The friar does not want his stratagem to fall apart. This is a rather strange thing for the Friar to sanction the consummation of a marriage that clearly could only struggle to have a future. I believe that this was an attempt by the Friar to solve one of his own problems. The Friar married the couple to stop the feuding between the Capulets and the Montagues. If the families found out that their children were married they would want to try and annul it, but the Friar knows that if the marriage has been consummated that would not be possible.

Never the less, the Friar does not deter Paris, even though this is the chance to relieve Juliet of the burden of lies that is beginning to weigh her down. I believe that this is a totally selfish act on the part of the Friar. He knows that maybe he will be able to get away with marrying Juliet twice. If he has to admit marrying the two youths in secret he will lose his position in the church and the respect that many people in Verona hold for him.

Juliet secretly meets the Friar as though at confession and despairs at the loss of Romeo. The Friar thinks up another rash plan to have her drink a potion that will make her look dead. For a moral, religious man he has never advised Romeo or Juliet to actually be honest and tell the truth, it has never crossed his lips. One wonders how much what the Friar is doing is motivated by self interest, and his plans at every step have been immoral.

‘What if it be a poison which the Friar

Subtly hath ministered to have me dead,

Lest in this marriage he should be dishonour’d.’

When the news of what the Friar has planned for Juliet fails to reach Romeo and the news that Juliet has really died reaches him instead the Friar has to try and act quickly. But by the end of this play we even see the Friar rejecting his own advice and stumbling to reach Juliet’s grave before Romeo can find her, ‘How oft tonight have my old feet stumbled at graves?’ he says.

Friar Lawrence’s’ actions at the end of the play are remarkable for a religious man because he tries to play God. He has used his power to bury the dead, and the knowledge of his plants for deceit. Friar Lawrence gets Juliet to drink a potion, which puts her in a coma like state, falsifying her death. He gave no thought to Juliet’s parents who would have to bury their daughter on the day that they had planned for her to be wed. Then he tries to resurrect her, and plans to send her away to a convent, which would leave her parents with more heartache and grief finding her tomb empty. The Friar’s plan was mindless deceit. In his attempt to play God, Friar Lawrence is condemned to fail by the simple arrogance of his act. Considering the last few acts we are in our simple right to condemn him for his actions.

It is important to realise that William Shakespeare’s ‘Romeo and Juliet’ derives from a poem by Arthur Brooke, ‘The Tragical History of Romeus and Juliet’ which was a deliberately Anti-Catholic text, and Shakespeare would have been dramatising those same Anti-Catholic attitudes in producing this play. The Friar in ‘Romeo and Juliet’ welcomes Romeo with ‘Bendicite!’ which is a Latin word. Friar Lawrence is a Catholic, the immediate effect of using this word to a Protestant audience would have been that of alienation.

Our opinions are swayed throughout the whole play; a formal, educated Priest becomes a rash, stumbling cleric. I see the characterisation as an attack on the Catholic Church, Shakespeare’s own views on the Catholic religion. But I also believe it has an important moral; those who try to play God, no matter what religion they believe, will stumble. 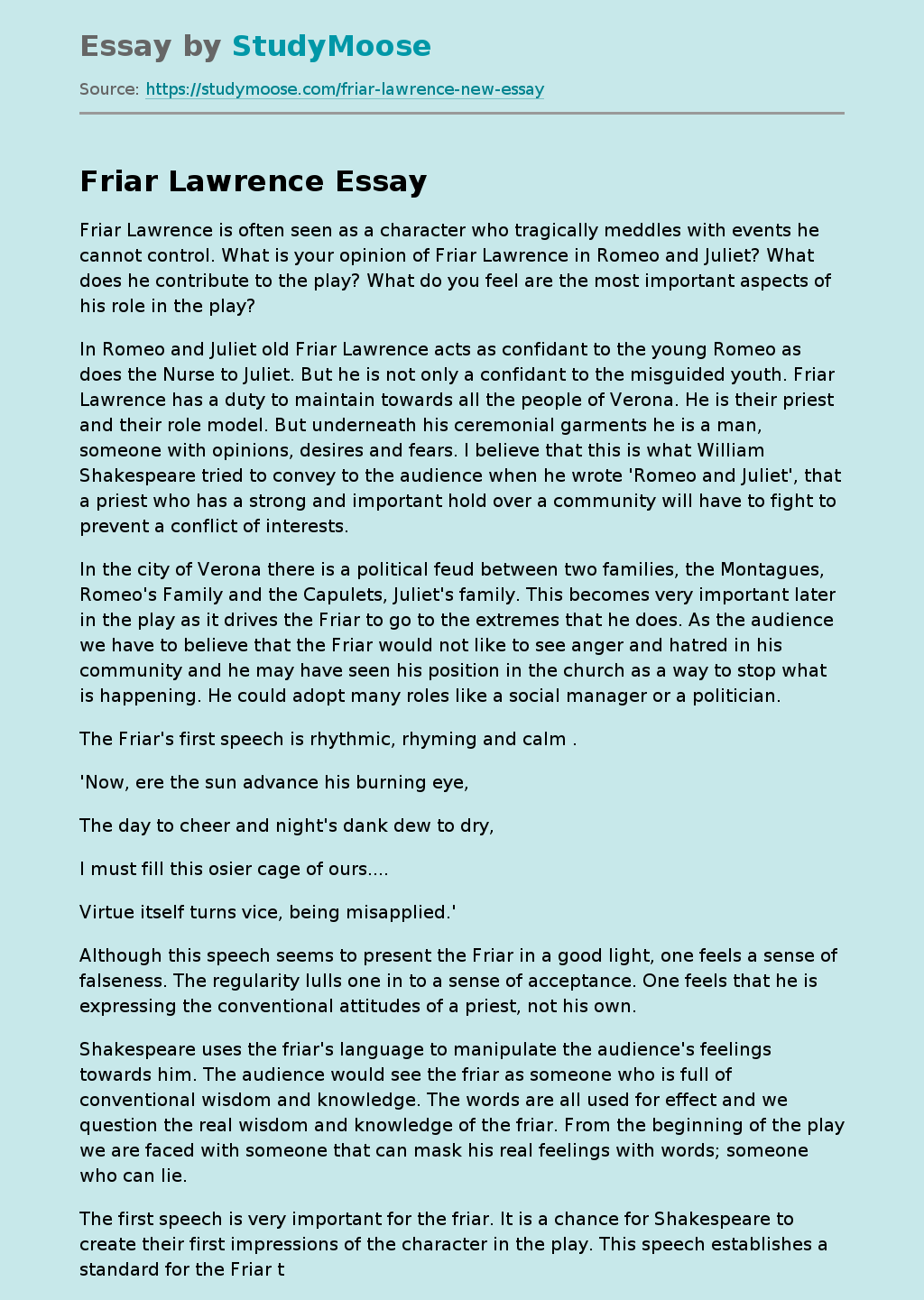