How Is Friar Lawrence Presented in Romeo and Juliet?

During the play of Romeo and Juliet, the characters show love in many different ways. Some characters fall in and out of love very quickly in Romeo and Juliet. For example, Romeo is in love with Rosaline at the start of the play, which is presented as an immature action. Today, we might use the term “puppy love” to describe this. Romeo’s lover Rosaline is shallow and nobody really believes that it will last, including Friar Laurence: Romeo – “Thou chid’st me oft for loving Rosaline” Friar Laurence – “For doting, not loving, pupil mine”.

Don't use plagiarized sources. Get your custom essay on
“ How Is Friar Lawrence Presented in Romeo and Juliet? ”
Get custom paper
NEW! smart matching with writer

In the first meeting of Romeo and Juliet, Shakespeare uses religion in describing the first love & sight of Romeo and Juliet. Such as “good pilgrim” when Juliet first responded to Romeo’s compliment, this show religious use. However during Romeo’s & Juliet’s first meeting they share a sonnet to express each other’s first love for one another, “The gentile sin this” is a very ironic line because it’s end result is death.

Just before Romeo & Juliet share their first kiss, Juliet exclaims herself as a saint “Saints do not move, though grant for prayers’ sake” – Juliet is saying that her prayers have been answered. Romeo described Juliet as a saint “O then, dear saint, let lips do what hands do”, this means she’s seen holy by Romeo. During the first Balcony scene Shakespeare introduces the example of love from the first meeting of Romeo & Juliet, example such as “Dear saint”.

Romeo says “Juliet is the Sun”, which is describing Juliet as a special part of the universe the centre of everything, for example, without the sun life would not be able to exist also life revolves around the sun and it seems to make Juliet seem brighter and more important. During the beginning of the fight between Tybalt and Romeo, Romeo pleads with Tybalt to not to fight “I do protest I never injured thee, but love thee better than thou canst devise” Only Romeo knows of the love and marriage between himself and Juliet.

Tybalt, Juliet cousin is now part of Romeo’s family, and does not want to hurt/ kill him for the future love between himself and Juliet. Tybalt emphases his anger with horns on his costume in Romeo & Juliet the film. Also Tybalt does not know about Romeo and Juliet so he decides he wants a fight. After Romeo exits and Tybalt kills Mercutio Romeo enters and kills Tybalt, this questions Juliet over Romeo; does Romeo prefer friends of family? Romeo expected the death sentence, but the decision was to only banish him, he acted badly to this ecision – “Ha! Banishment? Be merciful – say death”, He would rather prefer death because he’d be with Juliet when she dies than never see her again – “Let me ta’en, let me be put to death” During the 2nd balcony scene Romeo says “more light and light, more dark and dark our woes” this means that whenever there’s more happiness, there will always be darkness in the background, and their love is gradually being taken over by darkness making them scared.

During the dying scene Romeo sees Juliet as being dead. “Thy drugs are quick. Thus with a kiss I die” Romeo exclaims that finally their love has been overrun with sin and wrong doing in life, the only way for them to be together is in death. When Juliet wakes up and realises Romeo is dead, she takes her own life because if she cannot be with her lover Romeo in life, than they shall share death “O Happy dagger! This is thy sheath, – there rust, and let me die” she is happy to take death over life with sin.

In conclusion Romeo and Juliet’s life was only taken from them because of the selfishness immaturity between themselves. Also Friar Lawrence should not have encouraged them to go forward with Juliet pretending to die. However because of the many sin’s Romeo and Juliet had committed, they would have probably chosen death over life.

How Is Friar Lawrence Presented in Romeo and Juliet?. (2016, Dec 09). Retrieved from http://studymoose.com/how-is-friar-lawrence-presented-in-romeo-and-juliet-essay 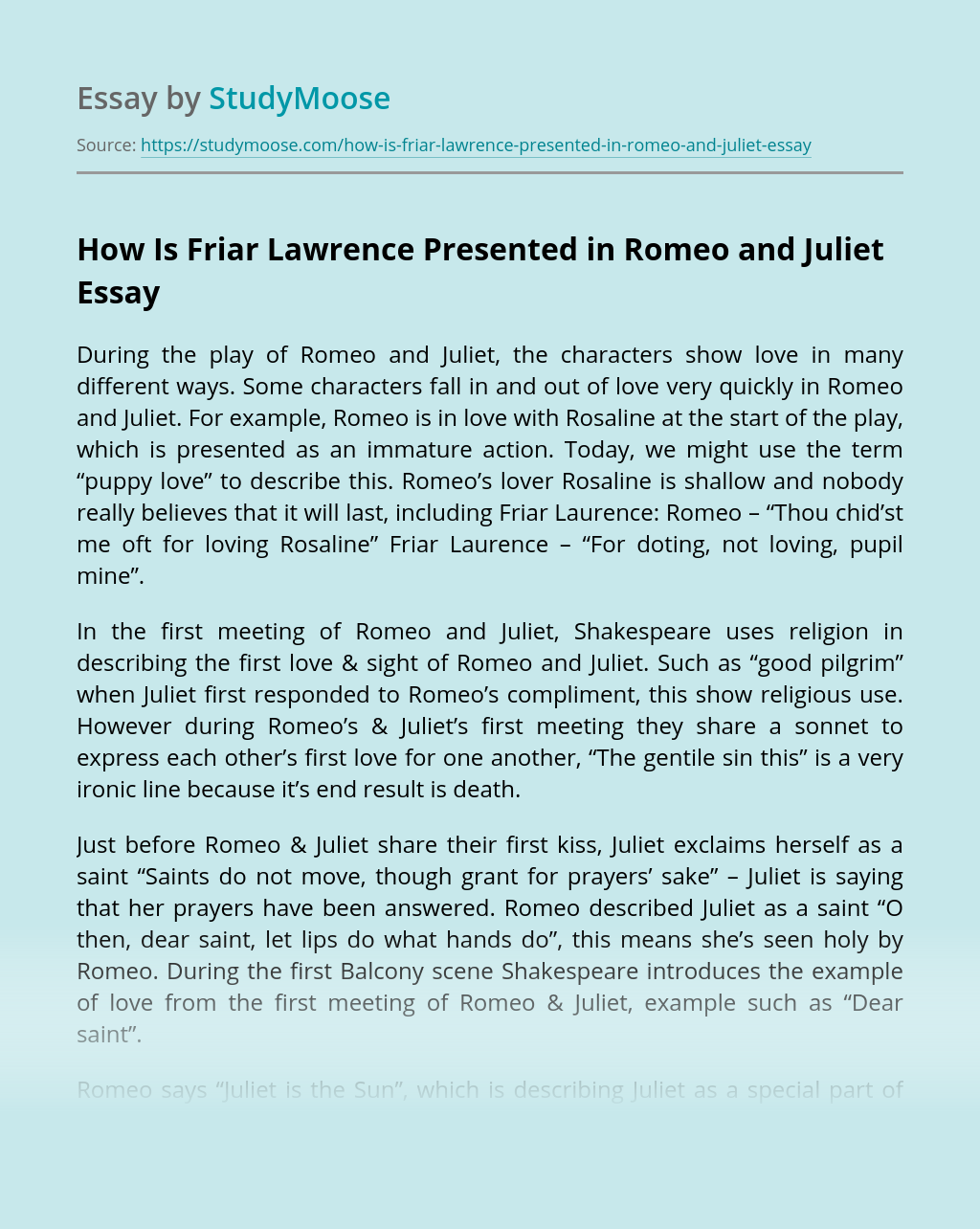