Who Can Be Blamed for the Tragedy of Romeo and Juliet?

‘Romeo and Juliet are entirely responsible for their demise.’ To what extent do you agree? William Shakespeare’s tragedy, Romeo and Juliet, was written during the end of the Elizabethan Era.

Don't use plagiarized sources. Get your custom essay on
“ Who Can Be Blamed for the Tragedy of Romeo and Juliet? ”
Get custom paper
NEW! smart matching with writer

It is revealed within the play that, Romeo and Juliet are partially responsible for their own demise. The responsibility of their demise primarily addresses the audience through the characterization, themes, and emotional conflict experienced throughout the play. During the course of the play, Shakespeare wanted to address that fate and destiny can influence a person’s life over the duration of the Elizabethan Era. His belief on fate and the theme of love perpetrates people’s actions during the reign of Queen Elizabeth. Subsequently, the Jacobean Era reinforced people’s views of life through the belief of superstitions, and most prominently from the awareness of witchcraft. Shakespeare tries to convey that fate is sealed within the person and the tragic moments in life is just a fragment of their inevitable future.

Furthermore, Shakespeare positions his audience to consider Romeo and Juliet’s responsibility for their own tragic ending. Overall, Romeo and Juliet is a tragedy written for the Elizabethan audience to discuss who and what is primarily responsible for the “two star-crossed lovers” death.

Fate has a major role in being responsible for Romeo and Juliet’s untimely death. This is first displayed by Shakespeare during the prologue, when the chorus articulates Romeo and Juliet being “star crossed lovers who take their life“. Here the Prologue foreshadows their untimely fate through astronomical imagery. This is because stars are believed to control a person’s destiny and being “star crossed” is to be impeded by the stars. This also provides insight to the audience on the destruction of Romeo and Juliet’s relationship through their unfortunate destiny. Furthermore, the playwright works through metaphor to personify fate. This is made clear just before Romeo enters the Capulet’s party, when he describes “But He that hath the steerage of my course, Direct my sail!” This prompts us to interpret “He” controls the characters’ fate and is a god-like entity. Shakespeare suggests that fate is unhappy with Romeo and Juliet and steered their lives to tragedy.

Lastly, Shakespeare positions his Elizabethan audience to acknowledge that fate is a prolific form of misdirection. This is last shown through the playwright development of Christian allusion when Friar Lawrence states “A greater power than we can contradict hath thwarted [the plans] intents.” The author suggests that God and fate have prevented Friar Lawrence’s plan from functioning. Juliet’s counterfeit death coincidentally ended Romeo’s life through the overwhelming grief he experienced. This is also shown to be an example of dramatic irony because the audience knows that Juliet remains alive in the tomb. Fate and destiny is consequently one of the most prominent influences to ending Romeo and Juliet’s life. The family feud is equally responsible as fate for Romeo and Juliet’s tragic death. This is first introduced to the audience in the Prologue by sensory imagery when Shakespeare implies “Where civil blood makes civil hands unclean”. This raises the audience’s awareness of the two families’ rivalry and helps foreshadow violence and hate.

Additionally, the playwright uses the feuding families to convince the audience that the feud helps create a chain of tragic events and increases dramatic intensity. This is insinuated when Benvolio warns “if [the Capulet’s meet us], we shall not scape a brawl…these hot days, is the mad blood stirring.” Shakespeare uses pathetic fallacy to foreshadow a violent fight with the Capulets. This fight influenced Prince Escalus to become accountable for Romeo and Juliet’s demise, as he was too lax on Romeo’s punishment after he slew Tybalt.

Furthermore, the feud between the Capulets and Montagues made the Prince feel emotionally conflicted through [quote]. This reveals that the Prince lamented because Mercutio is his kinsman and tragically died from a sword fight with Tybalt. It is through the phrase “See what a scourge is laid upon your hate” that Shakespeare posits the audience to believe that the family feud was the main cause of the death of Capulet and Montague’s children. The Prince’s statement at the end of Romeo and Juliet also suggests that the theme of hate is intertwined with the two households [closer look on quote] through the metaphor. This moral teaches both Capulet and Montague to reconcile and develop a friendship. Similar to fate, the family feud was primarily responsible for the death of Romeo and Juliet. Romeo and Juliet’s impulsive actions and overwhelming emotions is a minor factor for their own demise. This was first displayed when Romeo was on Juliet’s balcony, she warned: “It is too rash, too unadvised, too sudden; too like the lightning”. This simile suggests that the haste Romeo demonstrated is a visible cause of the tragedy.

Romeo’s impatience also led to unwary actions such as killing Count Paris at the end of the play. This also proposes that the theme of love is fuelling Romeo’s hasty actions. Moreover, Shakespeare exemplified Juliet’s thoughts “What if this mixture do not work at all? Shall I be married then tomorrow morning?” This soliloquy suggests that Juliet has accepted Friar Lawrence’s plan, this later caused Romeo to kill himself. This caused the tragedy because the plan was too rushed. Juliet’s cognitive dissonance also suggests fear intertwined with the theme of love, as she starts taking risks. Romeo and Juliet is a minor influence on their own tragedy and is slightly responsible for their own death. William Shakespeare’s tragedy, Romeo and Juliet, is a play that the eponymous characters are partially responsible for their demise.

These tragic themes were important to the Elizabethan audience as it informs us that our lives are being pushed around by many factors and can contribute to tragedy. It is through the prominent factors of fate and destiny being the main cause of the death of the protagonists and the family feud between Montague and Capulet that is mostly responsible for the demise of Romeo and Juliet. Romeo and Juliet’s uncontrollable emotions is also slightly responsible for their own death. This tragedy is articulated in the play’s denouement when Prince Escalus states “For never was a story with more woe than this of Juliet and her Romeo.” As a result, the Elizabethan audience is aware of love’s impact on people and the manipulation of the characters. Overall, Shakespeare’s Romeo and Juliet is a tragedy where the eponymous characters are partially responsible for their demise.

Who Can Be Blamed for the Tragedy of Romeo and Juliet?. (2020, Sep 06). Retrieved from https://studymoose.com/who-can-be-blamed-for-the-tragedy-of-romeo-and-juliet-essay 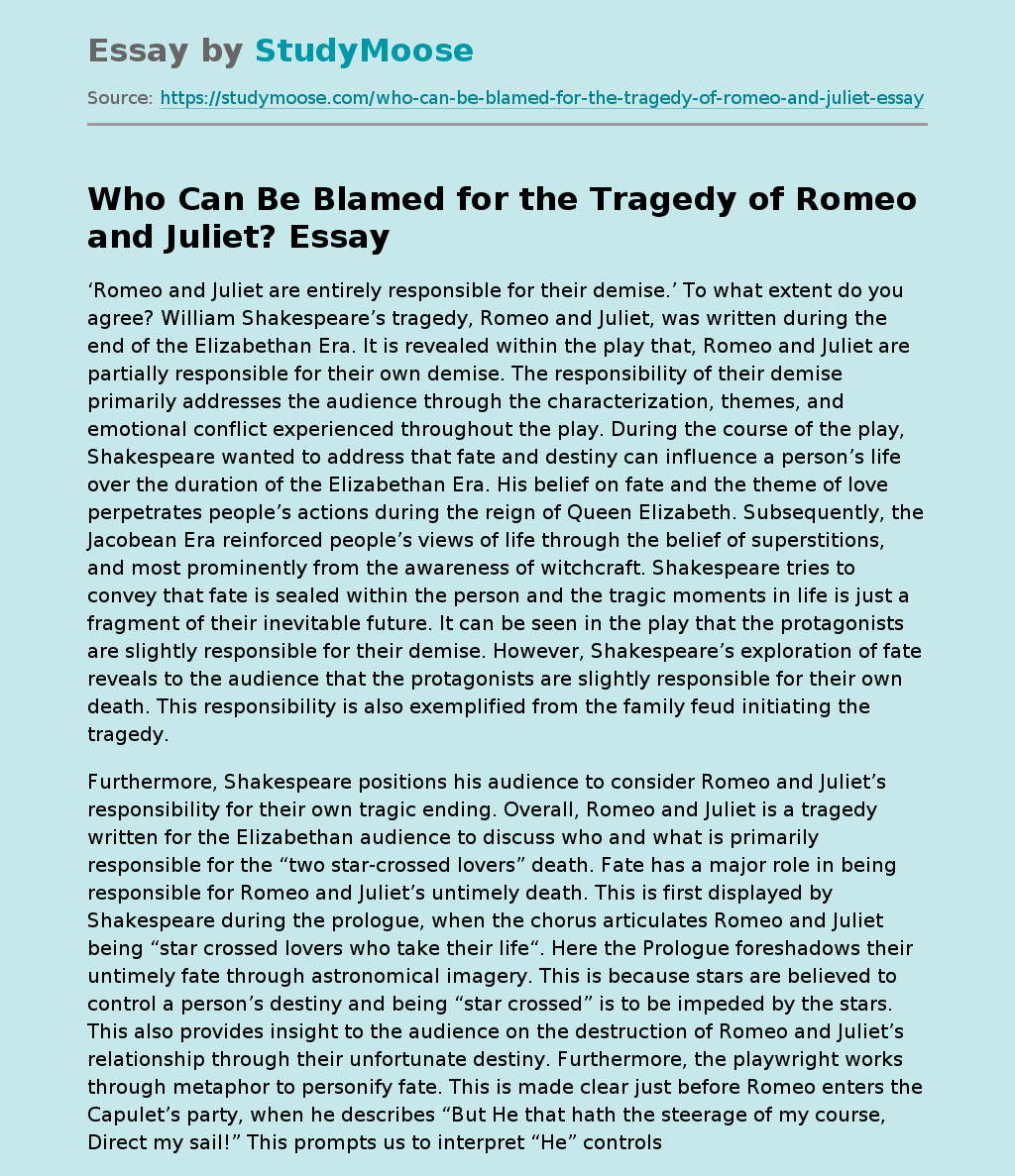