Character Flaws of "Romeo and Juliet"

Romeo and Juliet is one of Shakespeare’s plays about tragedy. It is about two lovers who commit suicide when their family rivalries prevent them from being together. The play has many characters, each with its own role in keeping the plot line. Some characters have very little to do with the plot. Many characters do not have much time on stage but their parts are crucial to the plot of the story. Some of the character flaws in this play are the reason why “The Tragedy of Romeo and Juliet” is a tragedy.

Don't use plagiarized sources.
Get Your Custom Essay on Character Flaws of “Romeo and Juliet” Just from $13,9/Page

One of Friar Lawrence’s most favorable traits is how good intentioned he is. For example, when he says “In one respect I’ll thy assistant be; for this alliance may so happy prove, to turn your households rancour to pure love, (II. iii. 92-94)” he is saying that the only reason he will marry Romeo and Juliet is because he hopes that the marriage will end the hostilities between the two houses.

Friar Lawrence is also a man who is not afraid to take risks when he feels it is necessary to help someone. For example, in II. vi., when he marries Romeo and Juliet, he is risking his reputation as a Friar so he can help the two lovers. Also, when he says “Take thou this vial, being then in bed, and this distilled liquor drink though off;” (IV. i.), he is suggesting that Juliet drink a potion so that she might fake her own death and avoid marrying Paris. This is an extremely risky thing to do because he does not know what will happen when Juliet is unconscious. Unfortunately, for all his good intentions the play still ends in tragedy.

In Shakespeare’s Romeo and Juliet the adults betray Juliet because they are unable to understand her. Juliet’s parents, Capulet and Lady Capulet, fail to understand Juliet’s decision not to marry Paris. The Nurse fails Juliet by not supporting Juliet’s decision to remain married to Romeo. These misunderstandings cause the adults to betray Juliet. The first to betray Juliet is her parents, Capulet and Lady Capulet. Capulet decides to marry Juliet to Paris. When Juliet refuses to do so, Capulet threatens to disown her. “…you shall not house with me,” (III, v, 200) he states. Capulet will only forgive her if she will consent to her father’s decision “…I’ll give you to my friend./An you be not hang, beg, starve, die in the streets.” (III, v, 203-204) His wife, upon hearing Juliet’s decision against marrying to Paris, refuses to give Juliet counsel. “Talk not to me, for I’ll not speak a word./Do as thou wilt for I have done with thee.” (III, v, 214-215) Lady Capulet is angered by Juliet’s choice and wishes. Juliet’s parents betray Juliet by not supporting Juliet on her decisions. Capulet and Lady Capulet do not know Juliet is married to Romeo, a fact that may have altered the outcome of this play.

In this play, Romeo’s tragic flaw is that he is always melancholy, miserable, and downcast, and Romeo is always in love. After he meets Juliet, he is very sad because he discovers that she is a Capulet. Shortly after, he is banished from Verona and is very downcast once again over the fact that he will not be able is see Juliet ever again. Romeo is so extremely in love that he says that instead of being banished, he would rather be dead. When Friar Laurence gives Romeo the news of his banishment, Romeo replies by saying “Ha, banishment! Be merciful, say “death”…” (III. iii. 12). Romeo feels that “There is no world outside of Verona walls, / But purgatory, torture hell itself…” (III. iii. 17-18).

Romeo is so much in love with Juliet that he wants to kill himself when he discovers that she is dead. Romeo causes the death of Mercutio and Tybalt. If Romeo was not trying to make peace with Tybalt, Mercutio would not have tried to defend Romeo. Mercutio feels that Romeo is afraid to fight Tybalt and he wants to defend him. Romeo only wishes to make peace with Tybalt because now he is a relative of his. Paris dies by trying to defend the Capulets tomb from Romeo. Paris feels that Romeo has come to the tomb “…to do some villainous shame / To the dead bodies…” (V. iii. 52-53) and dies trying to defend Juliet and the Capulets. Had Romeo not been so quick to try and solve the problems his own way, the play would have changed drastically.

Had the characters of this play not acted in the way they did, too loving, not loving enough or not understanding enough, the outcome of this play could have been completely different. We must however realize that this is just a play and by most peoples aspect, one of the greatest love stories every told.

Character Flaws of “Romeo and Juliet”. (2016, Jun 22). Retrieved from https://studymoose.com/character-flaws-of-romeo-and-juliet-essay 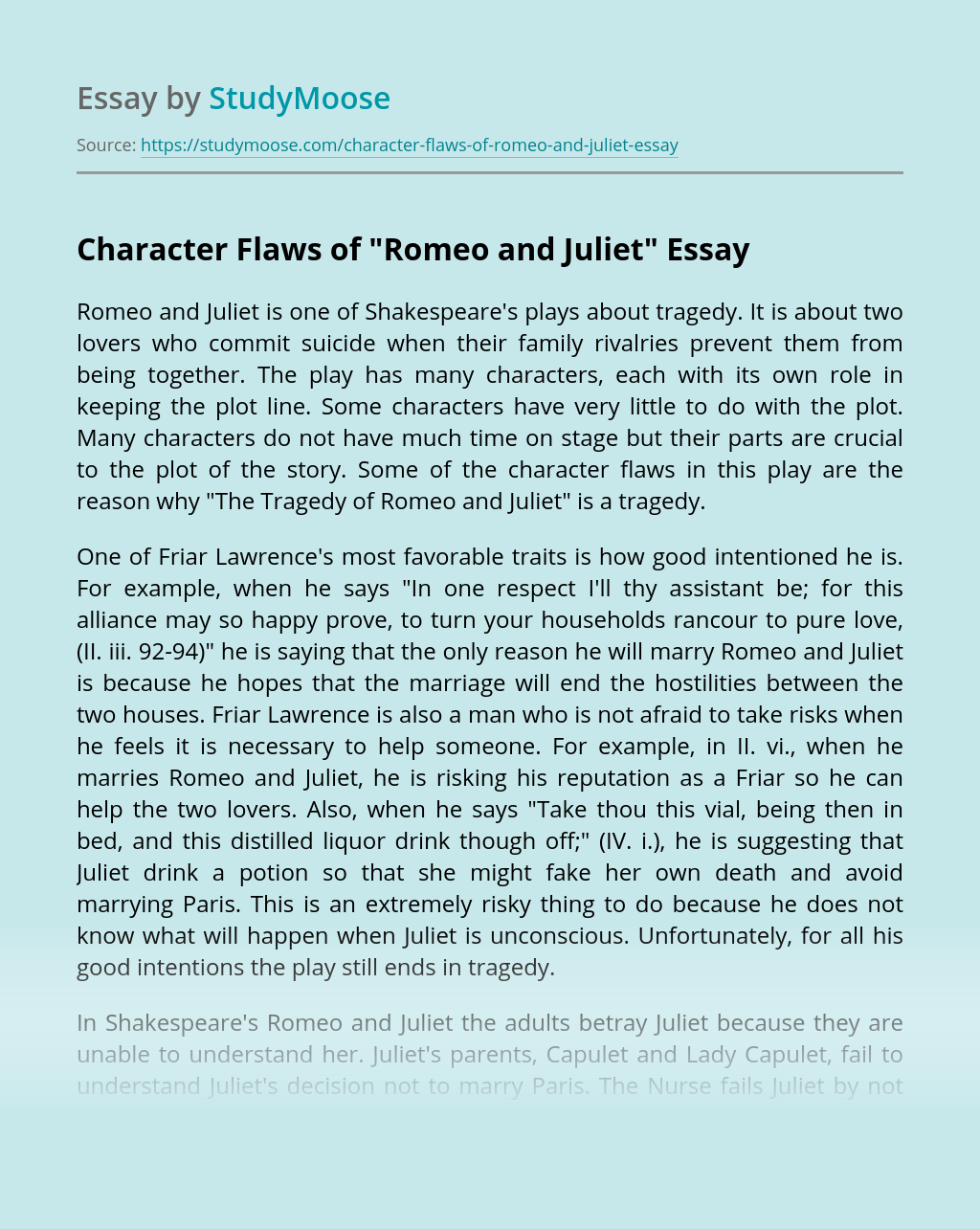 Outdoor Advertising Association of the Philippines

Outdoor Marketing Association of the Philippines (OAAP) became one of the sectoral members of Adboard on May 1974. The history of outside marketing dates back during ancient times when male carved stone plates to communicate ideas by displaying them in public places. For this reason, outside advertising was currently present and regarded as a main...

Get Essay
AbstractionThin fabrication has existed since the late seventiess

Abstraction Thin fabrication has existed since the late seventiess. From early on, many companies in industrialised states deployed thin fabrication more efficaciously than others. Successful thin execution is frequently attributed to organisational civilization. However, organisations may besides be influenced by the civilization in the states where they are located. Nestle is the world’s taking nutrition,...

Analysis of Miss Emily in "A Rose for Emily"

In the fiction” A Rose for Emily “,Miss Emily’s life in particular its gruesome and saddened by the outcome of Tan Wan and as well as the central figure in the daily lives of the other two – her father, her dead lover’s fate, should not only to us Bring thriller, and the offensive suppressed,...

The goal of this experiment was to synthesize dibenzalacetone by aldol synthesis. The name ‘Aldol synthesis’ was taken from the words ‘aldehyde and alcohol’. This is because the product of this reaction contains both an aldehyde and alcohol. The carbon-carbon bond-forming reaction is referred to as aldol addition. An aldol condensation yields many species of...