Who Is to Blame for the Tragedy of Romeo and Juliet?

To Shakespeare’s audience, fate and destiny were both acceptable concepts; unlike today, when something goes wrong the people look for someone or something to blame, instead of believing that the outcome was inevitable. We do not like to think that we aren’t in control of our own lives. In Romeo and Juliet, it is difficult to escape from fate. At the beginning of the play, Romeo and Juliet are described to have “death marked love”, this suggests the play is going to have fate as one of its themes.

Don't use plagiarized sources. Get your custom essay on
“ Who Is to Blame for the Tragedy of Romeo and Juliet? ”
Get custom paper
NEW! smart matching with writer

Fate occurs in the play on many occasions, for example, when Romeo and Juliet meet each other’s gaze and meet each other in a room packed full of people. Is it fate that Lord Capulet sends an illiterate messenger to hand out the invitations for the upcoming party, or is it just a coincidence? The even more ‘coincidental’ thing about the messenger is that Romeo and Benvolio just happen to be walking in the same area as the messenger.

Destiny and foreshadowing appear again in Act 3 Scene 5 when Juliet imagines seeing Romeo dead in a tomb, “O God, I have an ill-divining soul. Methinks I see thee now, thou art so low As one dead in the bottom of a tomb. Either my eyesight fails, or thou look’st pale.” – Act 3 Scene 5 Lines 53-56. This is an obvious hint to the ending of the play.

At the beginning of Act 5, Romeo describes a dream where he is found dead by Juliet, is this fate trying to warn Romeo of what’s yet to come? “If I may trust the flattering truth of sleep, My dreams presage some joyful news at hand. My bosom’s lord sits lightly in his throne, And all this day an unaccustomed spirit Lifts me above the ground with cheerful thoughts. I dreamt my lady came and found me dead— Strange dream, that gives a dead man leave to think—And breathed such life with kisses in my lips That I revived and was an emperor.” – Act 5 Scene 1 Lines 1-9.

This essay is not just all about blaming, I’m also here to defend someone or a group of people. In this case, I will be defending the younger generation.

We learn from the prologue that the hatred between the two families has been going on for some time. The Capulets and Montagues have been feuding for assumed generations, “from ancient grudge…” – Prologue Line 3. This indicates that the family’s hatred for each other began long before the story of Romeo and Juliet. This is the main reason that I will be defending the younger generation.

You can not blame Romeo and Juliet for their actions in the play. Romeo and Juliet are merely two star crossed lovers, a phrase which originated from this play, who’s love creates conflict which they never imagined would lead to their deaths. The only wrongdoings of Romeo and Juliet were that they fell in love with each other. But the only reason this scene was a ‘wrong doing’ was that they had figured in their lives, like their parents, which caused the outcome of their love to be disastrous. Without these influences in their lives, they could’ve lived a happy life, “From forth the fatal loins of these two foes A pair of star-crossed lovers take their life” – Prologue Lines 5-6.

Tybalt is, of course, partially to blame for the tragedy of Romeo and Juliet, like every other character; however, he is not the ultimate reason for Romeo and Juliet’s deaths. We need to remember that, while Tybalt has his own flaws, such as his famous temper, he was only acting out of tradition, the long-lasting hatred and fighting between the two families. This also applies to Mercutio, he also acted throughout the play due to his upbringing as a Montague.

Benvolio was the least to blame out of the entirety of the younger generation for the tragedy of Romeo and Juliet, this is because he never sought out violence between the two families, but instead tried to stop it. “Part, fools! Put up your swords. You know not what you do.” – Act 1 Scene 1 Lines 54-55.

Ultimately, fate is the main cause of the tragedy of Romeo and Juliet because most of the main points in the play which lead to their deaths occurred because fat willed it so. the younger generation is least to blame because most of their actions were influenced by their upbringing, the feuding between their parents.

Who Is to Blame for the Tragedy of Romeo and Juliet?. (2020, Nov 23). Retrieved from https://studymoose.com/who-is-to-blame-for-the-tragedy-of-romeo-and-juliet-essay 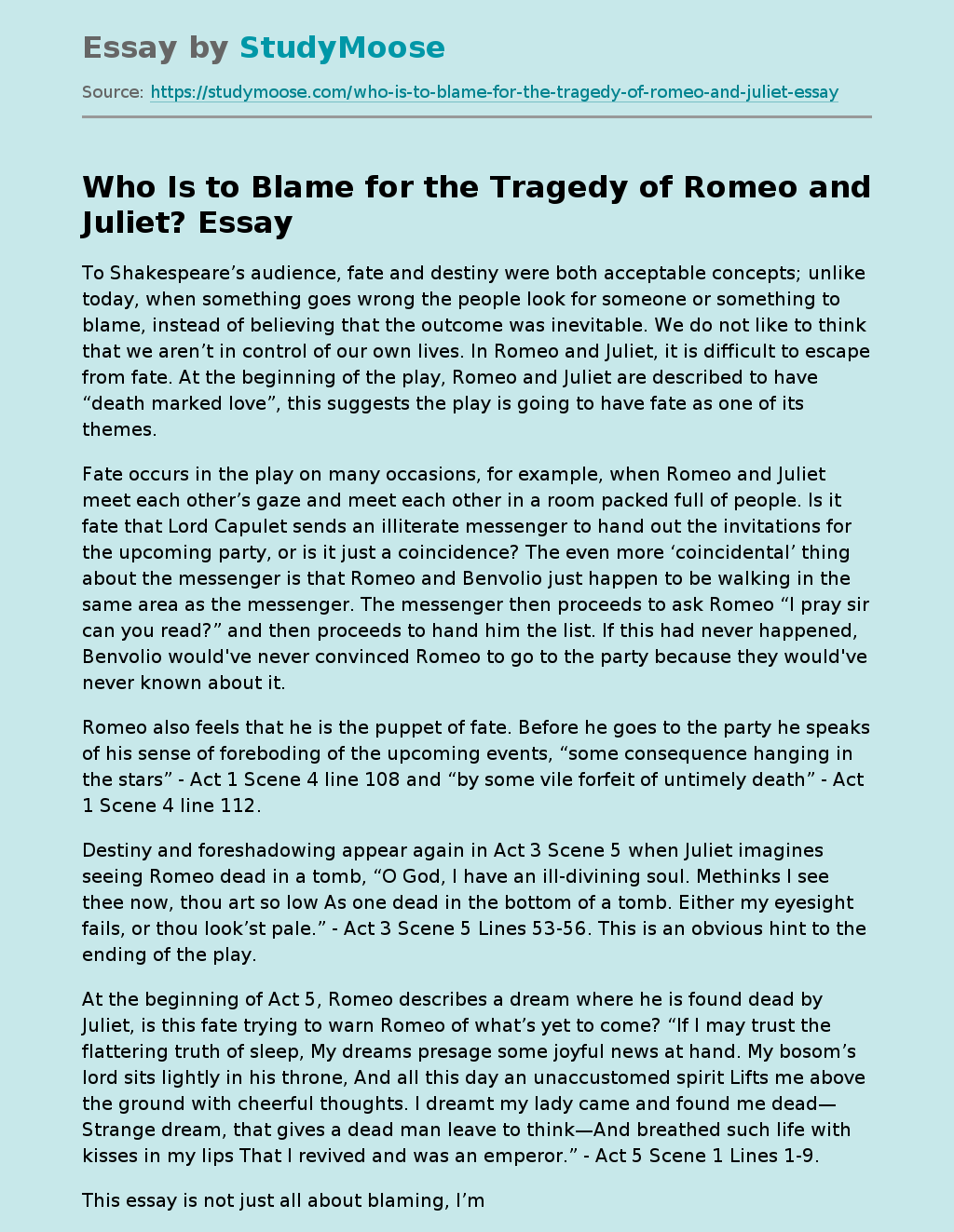