Romeo and Juliet vs Antigone

Similarities/Differences of Romeo and Juliet/Antigone
Rossiter Worthington Raymond once said, “Life is eternal, and love is immortal, and death is only a horizon; and a horizon is nothing save the limit of our sight.” Many themes can be illuminated in this quote, but there are three that stand out and relate to the plot lines of these two tragic plays, in a way that makes the emotions and perception of the characters much more palpable and heartfelt. Shakespeare’s Romeo and Juliet and Sophocles’ Antigone both develop a complex plot structure and show many similarities and differences through the three themes of Religion, Love, and Death.

Don't use plagiarized sources. Get your custom essay on
“ Romeo and Juliet vs Antigone ”
Get custom paper
NEW! smart matching with writer

These tragedies show plot structure through an importance on religion. Religion plays a big part of life in both plays. Marriage is one of the many things in Romeo and Juliet and Antigone that is affected by religion. Not only was marriage considered much more sacred, creating a commitment in which divorce was not an option, but the ceremony contained many religious symbols and rituals, and was focused around praying.

Marriage was a very important part of everyday life, along with the religious/political leader. Friar Lawrence played a very important role in the plot line of Romeo and Juliet, similar to the role that Creon played in Antigone.

The Friar gave advice, helped Romeo escape to Mantua after he was exiled, devised a plan to help Juliet be with Romeo, in an attempt to help the couple escape the conflict raging between their two families, while Creon laid down the law and placed rules in place that changed the order of events.

“Hold daughter; I do spy a kind of hope, which caves as desperate an execution. As that is desperate which we would prevent. If, rather than to marry County Paris, Thou hast the strength of will to slay thyself, Then is it likely thou wilt undertake a thing like death to chide away this shame, that cop’st with death himself to scape from it: and, if thou darest, I’ll give thee remedy.”

(Act 4, Scene 1). Not only did Religion influence leadership, but also was a large aspect of conflict. The basis of the entire conflict of Antigone a belief in the afterlife and religious burial rituals, which were the entire reason behind the story, thus creating the entire plot line. In Romeo and Juliet, on the other hand, religion banded with the conflict and along with many punishments that were inflicted upon the characters, particularly after the duel between Tybalt and Mercutio.

Antigone and Romeo and Juliet would not be the same without Religion. Love also ties in with the overall plot structure of Romeo and Juliet and Antigone. Not only does love change the actions of many of the characters, but also roots itself down to the very basis of these afflictions. Love creates Romeo and Creon’s fatal flaws, which causes the fragments in their plot lines that change the outcome of the plays. Romeo’s love for Juliet causes him to go through a wave of emotions, which cause him to act hastily and make decisions that create his downfall in the end.

Creon, on the other hand, lets his hatred and leadership get the best of him, which causes him to let his love grow too late; he realizes his fatal mistake after the ones around him have passed. These fatal flaws lead to a conclusion which leaves the characters of both stories with a life lesson to ponder. The families of Romeo and Juliet, as well as Creon both are left with a tragic loss, which helps them learn an important lesson in the end: a lesson of love and compassion for those who have died. This helps leave the audience with a satisfactory ending, and leaves a moral; this newly found love shows that the deceased characters have not died in vain. This newly found love is what changes the entire conclusion for both tragedies.

The death of Romeo and Juliet creates a bond between Montague and Capulet, which causes sworn enemies become closely tied and express their grief together for the death of their children. In Antigone, Creon’s newly found love for Antigone, Eurydice, and Haemon after their deaths causes him to see that his power has gotten the best of him. “This letter doth make good the Friar’s words. Their course of love, the tidings of her death: And here he writes that he did buy a poison of a poor pothecary, and therewithal came to this vault to die, and lie with Juliet.

Where be these enemies? Capulet! Montague! See, what a scourge is laid upon your hate, that haven finds means to kill your joys with love.” (Act 5, Scene 3). This love between the characters of these plays changes the plot structure in ways that no other themes could portray. The overall theme of death is prominent in almost every tragedy, but it is always exposed with a different approach. These two stories portray death in a unique way that broadens the plot line and adds a harsh truth to the overall message in the best way this theme can create. Antigone’s death and her attitude towards sacrificing her life for her brother portrays a bitter realization that adds depth to the setting.

In Romeo and Juliet, this attitude is reflected through the fact that these two lovers are willing to die for each other. Overall, their willingness to die for their cause sheds a light on the reality of life, and adds emotional depth to the plot lines of both stories. Another factor that changes the deaths that occur in the plot lines is power. Creon kills many in his blindness and consumption by his lust for power, in Antigone, and the Capulets and Montagues end up killing Romeo and Juliet in their longing for rein over the other. They let their power get to their head, killing many in the process, not just literally but in a metaphorical sense, in terms of what drove characters to die or to kill themselves.

This death also gave a sudden realization, which caused the death of two characters. Not only did Lady Montague suddenly die from grief in Romeo and Juliet, but Eurydice also killed herself out of grief for the loss of her son. Death not only changes the plot lines of these two plays, but also changes the life lessons learned, and overall sheds a different light on the stories that no other theme could create. Religion, Love, and Death are simply three words, but they can do much damage when it comes to theme.

Plot structure, conflict, life lessons, and fatal flaws can all sway in entirely opposite directions, depending on how these three themes are used. In Romeo and Juliet and Antigone, these three themes also show the many similarities and differences that we often times tend to overlook. These similarities and differences not only reveal agate themes that the settings can often times conceal, but overall add emphasis to messages of both the stories, and can make the meaning stretch much farther than when standing alone.

Romeo and Juliet vs Antigone. (2016, Apr 30). Retrieved from https://studymoose.com/romeo-and-juliet-vs-antigone-essay 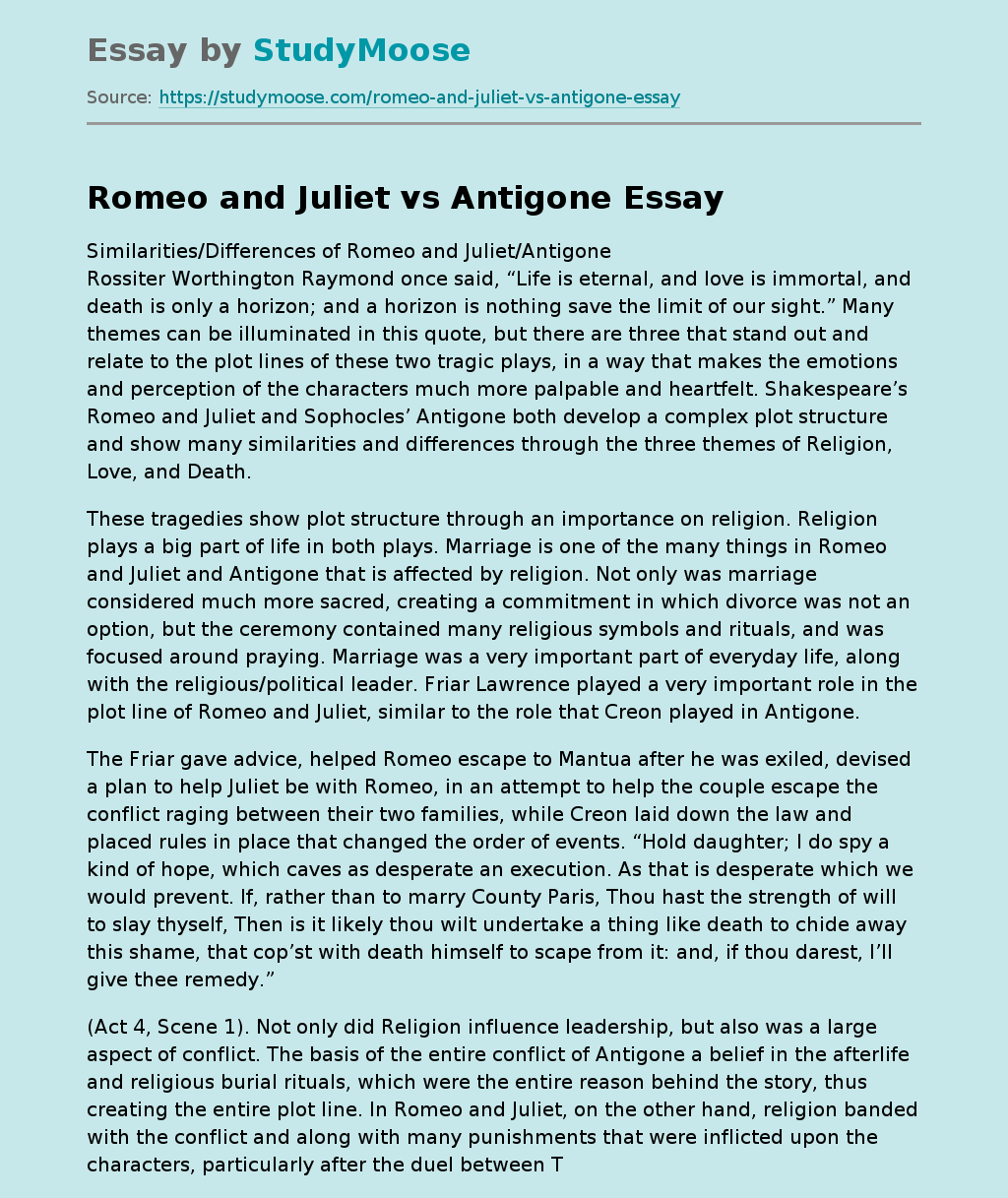