Romeo and Juliet- Victims of Fate or Choice

Romeo and Juliet were not victims of fate: as many people believe, but instead were two lovers that made terrible choices. When I was a little kid; I often times heard the love between a boy and a girl referred to as Romeo and Juliet. I would always think to myself that I wanted to be just like them some day. However as I grew up and actually read the story and was old enough to interpret the events that actually occurred: I begin to realize that this story wasn’t quite the love story that I thought it was; in fact it was more of a tragedy.

Don't use plagiarized sources.
Get Your Custom Essay on Romeo and Juliet- Victims of Fate or Choice Just from $13,9/Page

I also begin to realize that the couple that I once idolized; were in fact rather foolish. They made a series of bad choices that were impulsive and not well thought out. Although many people would argue that fate brought them to their demise; I disagree; as the definition of fate is the development of events outside a person’s control, regarded as determined by a supernatural power.

I believe that many of the decisions that they made were within their control; and that those choices ultimately were the cause of their untimely deaths. From the very beginning of the play Romeo is seen making very bad choices, he was heartbroken over Rosaline who did not love him back and he decided to attend a ball hosted by the feuding family the Capulet’s- despite the fact that he was not invited: just to see her. This was certainly a huge risk because if someone would have noticed him under his disguise it could have had huge consequences. At the ball he unexpectedly meets Juliet. He immediately falls in love with her. In this scene, it is clear that he acts rather impulsively. He attended the ball claiming to be in love with Rosaline; however by the time he leaves he is professing his love for Juliet. It is at this point that he questions whether or not he even loved Rosaline in the first place stating “Did my heart love till now? forswear it, sight! For I ne’er saw true beauty till this night.” (1.5.53)

When Juliet and Romeo meet up again, they make plans to wed. They decide that their love is so strong that they must be destined to be together. Romeo goes right away to seek the advice of Friar Laurence and to ask him to marry him and Juliet. They did not tell their families or anyone else about this. The Friar tries to warn Romeo to use caution in moving so fast into love with Juliet; as he reminded him that he was just in love with Rosaline by
stating “Holy Saint Francis, what a change is here! Is Rosaline, whom thou didst love so dear, So soon forsaken? (2.3. 65-67). However, with Romeo’s persistence he decided to marry them anyway. In fact Romeo sneaks away and spends the night with Juliet for their wedding night. The two lovers at this point show that they have similar character traits: Juliet is also like Romeo in that she is impulsive and a risk taker: She weds Romeo without her parent’s permission; knowing that she is to be wed to Paris soon and she allows Romeo to come up to her bedroom to spend their wedding night: ignoring the danger of possibly being caught by her parents. Romeo encounters a situation in which he finds himself in the middle of a fight between his best friend Mercutio and Tybalt. He knows that he can’t fight Tybalt because he is wed to Juliet at this point; making the two of them family members. Mercutio and Tybalt begin to fight; and Romeo steps in between them to stop it. However, Tybalt stabs Mercutio under Romeo’s arm. Romeo then attacks Tybalt and kills him. Romeo in this scene indicates that he is a victim of fate by stating “O, I am Fortune’s fool!” (3.1.133) However, this was no fate. Romeo was clearly acting out of rage because of his best friend’s death and made the choice to take the life of Tybalt; Juliet’s cousin in revenge.

Juliet upon learning what happened to her husband immediately rushes to Friar Laurence asking for his help; insisting she would rather die than marry Paris. “O, bid me leap, rather than marry Paris.” (4.1.77) Friar Laurence assisted her by giving her a potion that would make her appear dead for a short time. “No warmth, no breath shall testify thou livest; The roses in thy lips and cheeks shall fade to wanny ashes.” (4.1.98-100) He is to get the message to Romeo in Mantua. Juliet in the meantime makes the choice to follow through with the plan, thus faking her own death. Her family is devastated to find her dead. At this point in the story, you can see just how cunning of a character Juliet can be. She has deceived her parents on many times and at this point is even willing to cause them great grief and sorrow in order to be with Romeo. Romeo away in Mantua; never got the message about Juliet’s planned death; because the Friar that was to deliver the message was stricken with illness for a few days. By the time he learned of her death he rushed to her side to see if it was true. Upon finding
Juliet’s lifeless body; he made the abrupt decision to kill his self. Juliet awakens shortly after to find Romeo dead and immediately decides to take her life in her own hands to be with him. “O happy dagger, / This is thy sheath,” (5.3.171) and she stabs herself to death. In conclusion; the couple both make a lot of quick decisions and clearly have bad judgment. They felt very strongly that they were destined to be together and they were willing to go to any extreme lengths, even death to be with each other. However, fate did not play a part in this story. I truly believe if they had made better decisions and not acted impulsively this would not be the tragic love story that we all know and love today.

Romeo and Juliet- Victims of Fate or Choice. (2016, Apr 03). Retrieved from https://studymoose.com/romeo-and-juliet-victims-of-fate-or-choice-essay 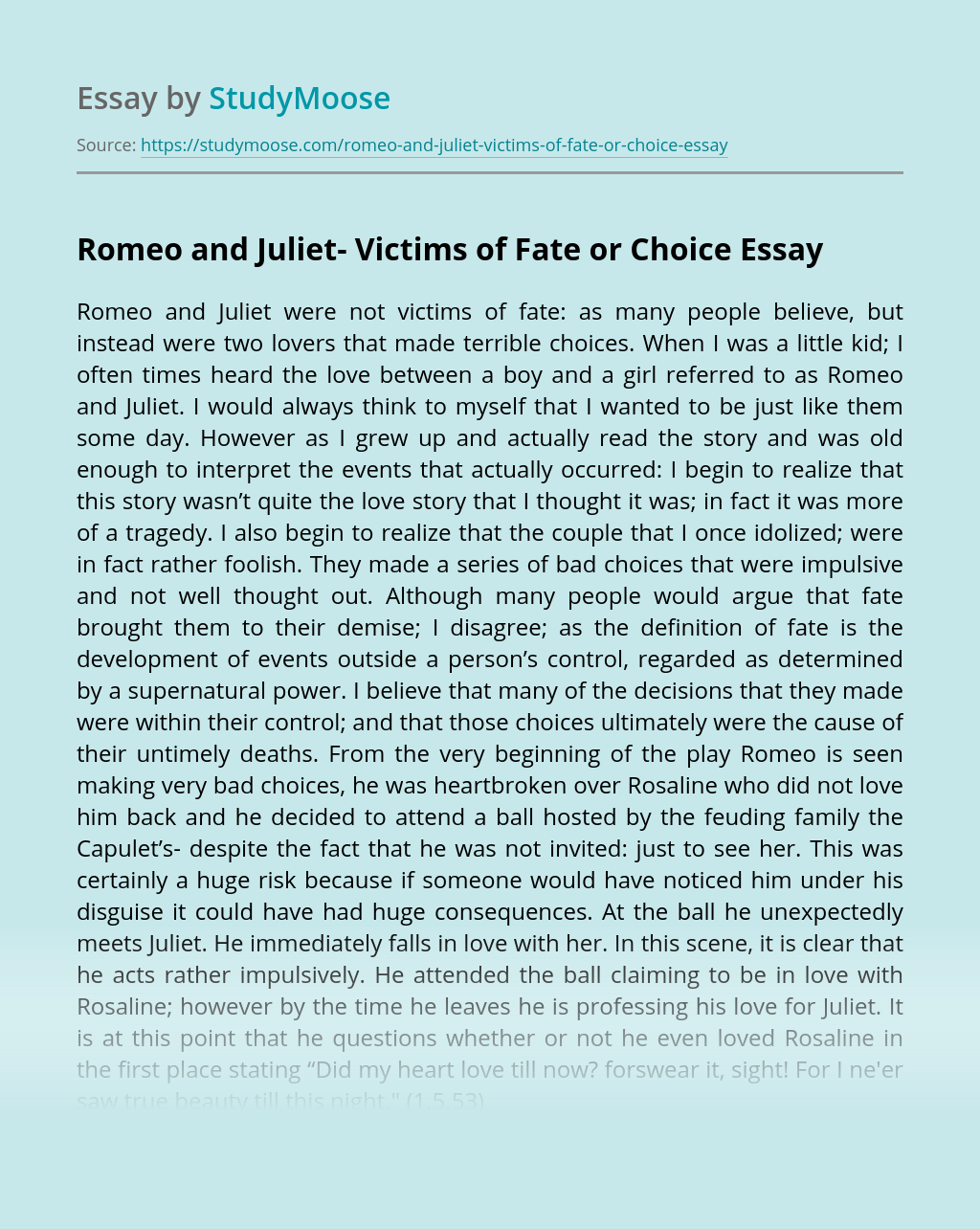 “The Things They Carried” by Tim O’Brian

Rate this post “One can never truly know oneself because each new experience adds to an individual’s identity, no matter how grand or minute the experience.” Identity is the physical and mental properties of and individual including their culture or traditions. Everyone has their own identity which allows us to be different. It is the...

Memories in Joan Didion's On Keeping a Notebook

Rate this post As far as writing an essay on weather I agree or disagree with the author’s statement that it is a good idea to leave the past behind is rather puzzling to me because after all, if she had a hard time to remembering the past and when she jotted things down on...

Get Essay
My Favorite Movie "The Wizard of Oz"

Rate this post During my 17 short years of life, I have seen many movies but my favorite movie is ‘The Wizard of Oz’. Dorothy, the main character, lands in Oz when a tornado in Kansas blew her and Totto in her house and she crushes the Wicked Witch of the West. Dorothy is greeted...

Pygmalion vs. My Fair Lady

Rate this post The Academy Award-winning musical film My Fair Lady produced by George Cukor in 1964, was based on the play Pygmalion by George Bernard Shaw written in 1913. Although, the basic story line and underlying themes are the same, there are a number of differences between the two famous works. The most pronounced...

Rate this post Sisterhood is one of the most important thing in the life a black women. There are many different types of friends, the ones you can confide in, the ones you can depend on for support, the ones that you can go out and have a good time with. The problem with all...