Don't use plagiarized sources.
Get Your Custom Essay on Romeo and Juliet: The Rivaling Families Just from $13,9/Page

The Capulet’s nurse, Angelica, acts like a mother to Juliet helping her with what to wear and giving her genuine advice. Before the Capulet party begins the nurse says to Lady Capulet, “Thou wast the prettiest babe that e’er I nursed” (Shakespeare 737).

This proves that the Nurse even fed Juliet when she was younger and has been like a mother to her.

Friar Laurence acts like a father to Romeo by giving him advice and uniting him with the love of his life, Juliet. Friar Laurence advises Romeo in Act II to slow down, “Therefore love moderately: long love doth so; Too swift arrives as tardy as too slow” (774). One big issue between the children and parents is communication. The young ones hide a huge secret most of the play because they are afraid to tell their parents because of their hatred -fueled rivalry. In the first act, Tybalt, a relative of Lady Capulet, expresses his hatred towards the Montague’s, “As I hate hell, all Montague’s and thee! (725).

If the families knew about their relationship, there hatred would have to stop them. Juliet’s interaction with her parents is fueled by no one having respect for each other. Juliet bluntly tells her mother in Act III that she will not marry Paris because she does not love him. Juliet expresses her anger in marrying Paris in Act IV by telling her father, “Thankful that even for hate that is meant love” (803). Juliet tells Lord Capulet she cannot marry Paris because she doesn’t love him. Juliet’s relationship for her father is rather horrible. Lord Capulet is forcing Juliet to marry Paris; he expresses his anger with hostile words to Juliet:

Hang thee, young baggage! disobedient wretch!
I tell thee what: get thee to church o’ Thursday, Or never after look me in the face:
Speak not, reply not, do not answer me;
My fingers itch. Wife, we scarce thought us blest
That God had lent us but this only child;
But now I see this one is one too much,
And that we have a curse in having her:
Out on her, hilding! (803)

Lord Capulet is mainly concerned with himself and his family’s reputation and clearly not Juliet’s feelings. He is so concerned about Juliet marrying a man who comes from a noble, wealthy family that he tells her toward the end of Act III that she will be kicked out of the house and die in the streets if she doesn’t marry Paris, “ An you be not, hang, beg, starve, die in the streets” (804). This shows us how horrible Juliet and Lord Capulet’s relationship is.

However, Romeo’s relationship with his parents is very low key. Romeo’s parents pay less attention to Romeo than the Capulet’s do to Juliet. They never appear with Romeo and they only talk of him in Act I and Act III. In the beginning of the play Lady Montague expresses her concerns for her son: “O, where is Romeo? Saw you him to-day? Right glad I am he was not at this fray” (1.1 106-107)” Lord Montague also is concerned with Romeo. In the same scene he thinks that something is wrong with Romeo because he has been sad: Many a morning hath he there been seen,

With tears augmenting the fresh morning dew.
Adding to clouds more clouds with his deep sighs;
But all so soon as the all-cheering sun. (726)

The Montagues find Romeo and seem to not be concerned about them. Romeo does not have conflict with his parents, but he does keep a big secret of marrying a Capulet. The interaction between the parents and children in Romeo and Juliet is very different and strange. Romeo and Juliet are rebellious, but are not that rebellious in a modern sense. When the play was written by William Shakespeare in the 1500’s, it was rebellious to marry someone that parents didn’t chose. In Romeo and Juliet’s case it is even more rebellious because they are family enemies. Today, people elope all the time and many teenagers don’t tell their families about their relationships. Juliet is more rebellious especially because she told her parents she wouldn’t marry Paris. Romeo, on the other hand, is not that rebellious because the only thing he hides from his parents is his marriage with Juliet. The two families feel very different about their children.

The Capulets believe that Juliet is pathetic and strange since she refuses to marry Paris and said she didn’t want to marry in the beginning of the play. The Montagues, however, feel that Romeo is a sad and bitter young man. They don’t know Romeo well and Montague proves it when Benvolio asks why Romeo is so sad: “I neither know it nor can I learn of him” (1.1 134). This shows that Montague does not really know his son. Romeo and Juliet have poor relationships with their parents due to the fact they barely see their parents. Both children do a horrible job communicating with their parents because are rarely present or because of their death feud with the rivaling families. Their parents feel that their children are sad, and the Capulets feel that Juliet is pathetic. If it were not for the horrible relationship between the children and parents then the children’s life may have not of ended in a tragedy.

Romeo and Juliet: The Rivaling Families. (2016, Apr 15). Retrieved from https://studymoose.com/romeo-and-juliet-the-rivaling-families-essay 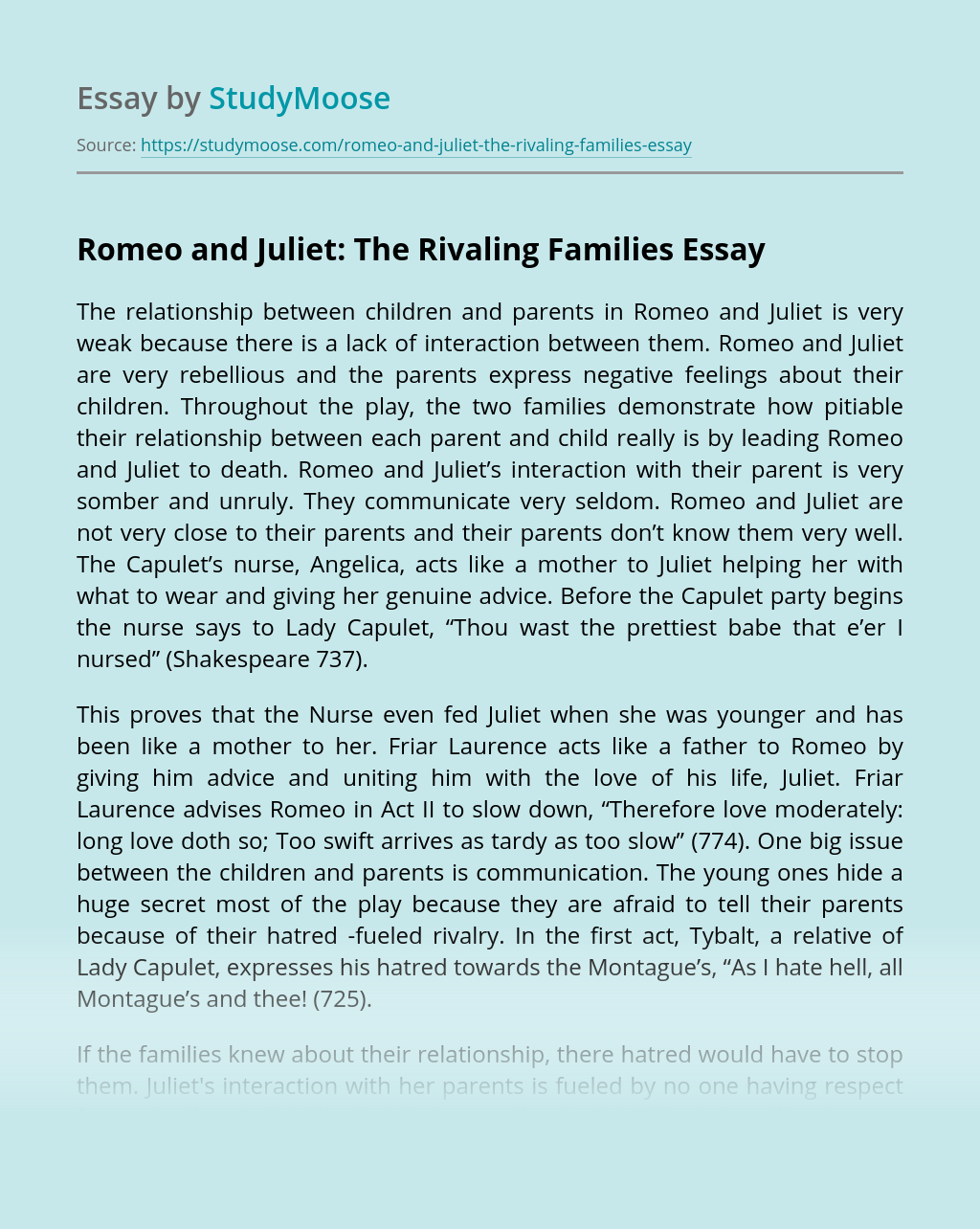 A foil character is one who enhances unique characteristics of another character. This is accomplished by a strong contrast between the two characters. The famous play writer, William Shakespeare uses numerous foil characters throughout his plays. One of these famous plays is Romeo and Juliet. This play has many foil characters which magnify qualities in... VIEW ESSAY

In the early stages of Romeo and Juliet, the Montague parents send Benvolio to discern the cause of Romeo’s melancholy. They intervene in his relationship, but in this case it has no long-lasting effects. During Romeo’s relationship with Juliet, adults again intervene; sadly, though, in this case the effects are deeply felt and much more... VIEW ESSAY

Now answer the seven questions below to demonstrate your understanding of Juliet’s character and some of the most important aspects of the play to this point. Be sure to answer each question fully and to the best of your ability, not only because this assignment will be graded, but also because detailed responses will be... VIEW ESSAY

View sample
The Punished and the Pardoned - Romeo & Juliet

The woeful tale of Juliet and her Romeo ended with numerous casualties, casualties that could have been avoided if not for mistakes made by characters in the play. In light of Romeo and Juliet’s suicide, Prince Escalus declares, “some shall be pardoned, and some punished” for their mistakes. (V. iii. 319) Among the punished should... VIEW ESSAY