The right against exploitation allows Indian citizens to stand up against any kind of exploitation that he/ she might be going through. This fundamental right is described in the constitution as:

Nothing in this article shall prevent the State from imposing compulsory service for public purposes, and in imposing such service the State shall not make any discrimination on grounds only of religion, race, caste or class or any of them.

Get a verified writer to help you with Right Against Exploitation

Article 24. Prohibition of employment of children in factories, etc.- No child below the age of fourteen years shall be employed to work in any factory or mine or engaged in any other hazardous employment The right against exploitation, given in Articles 23 and 24, provides for two provisions, namely the abolition of trafficking in human beings and Begar (forced labor),[30] and abolition of employment of children below the age of 14 years in dangerous jobs like factories and mines.

Child labour is considered a gross violation of the spirit and provisions of the constitution.[31]

Begar, practised in the past by landlords, has been declared a crime and is punishable by law. Trafficking in humans for the purpose of slave trade or prostitution is also prohibited by law. An exception is made in employment without payment for compulsory services for public purposes. Compulsory military conscription is covered by this provision.

FUNDAMENTAL RIGHTS as per Indian Constitution

Articles 23 and 24 deal with the right against exploitation. Article 23 which prohibits traffic in human beings and beggar and similar forms of forced labour is comparable to the Thirteenth Amendment of the American Constitution abolishing slavery or involuntary servitude. At the time of the adoption of the Constitution there was hardly anything like slavery or the widespread practice of forced labour in any part of India. The National Freedom movement, since the twenties of this century, had been a rallying force against such practices. However, there were many areas of the country where the “untouchables” were being exploited in several ways by the higher castes and richer classes. For example, in parts of Rajasthan in Western India, which was in pre-Independence days a cluster of Princely States, there existed a practice under which labourers who worked for a particular landlord could not leave him to seek employment elsewhere without his permission.

Very often this restriction was so severe and the labourer’s dependence on the “master” was so absolute that he was just a slave in reality. The local laws had supported such practices. Evils like the Devadasi system under which women were dedicated in the name of religion, to Hindu deities, idols, objects of worship, temples and other religious institutions, and under which, instead of living a life of dedication, self-renunciation and piety, they were the life-long victims of lust and immorality, had been prevalent in certain parts of southern and western India. Vestiges of such evil customs and practices were still there in many parts of the country. The Constitution-makers were eager to proclaim a war against them through the Constitution as these practices would have no place in the new political and social concept that was emerging with the advent of independence.

The ideal of “one man, one vote, one value”, equality before law and equal protection of laws, freedom of profession and the right to move freely throughout the country all these would have no meaning if “one man” was subjugated by “another man” and one’s life was at the mercy of another. Although any form of forced labour is an offence punishable under law just as untouchability is an offence, this constitutional guarantee is only against private individuals and organisations.

An important exception is made in favour of the State which may impose compulsory service for public purposes. Compulsory military service or compulsory work for nation-building programmes may provide examples of such service. The State may for instance, pass a law by which it may compel every university graduate to spend six months in villages immediately after leaving the university, on literacy work or other social service among the village people. Such a law, however, should not make any discrimination on grounds of religion, caste or class, or any of them.

Get a verified writer to help you with Right Against Exploitation 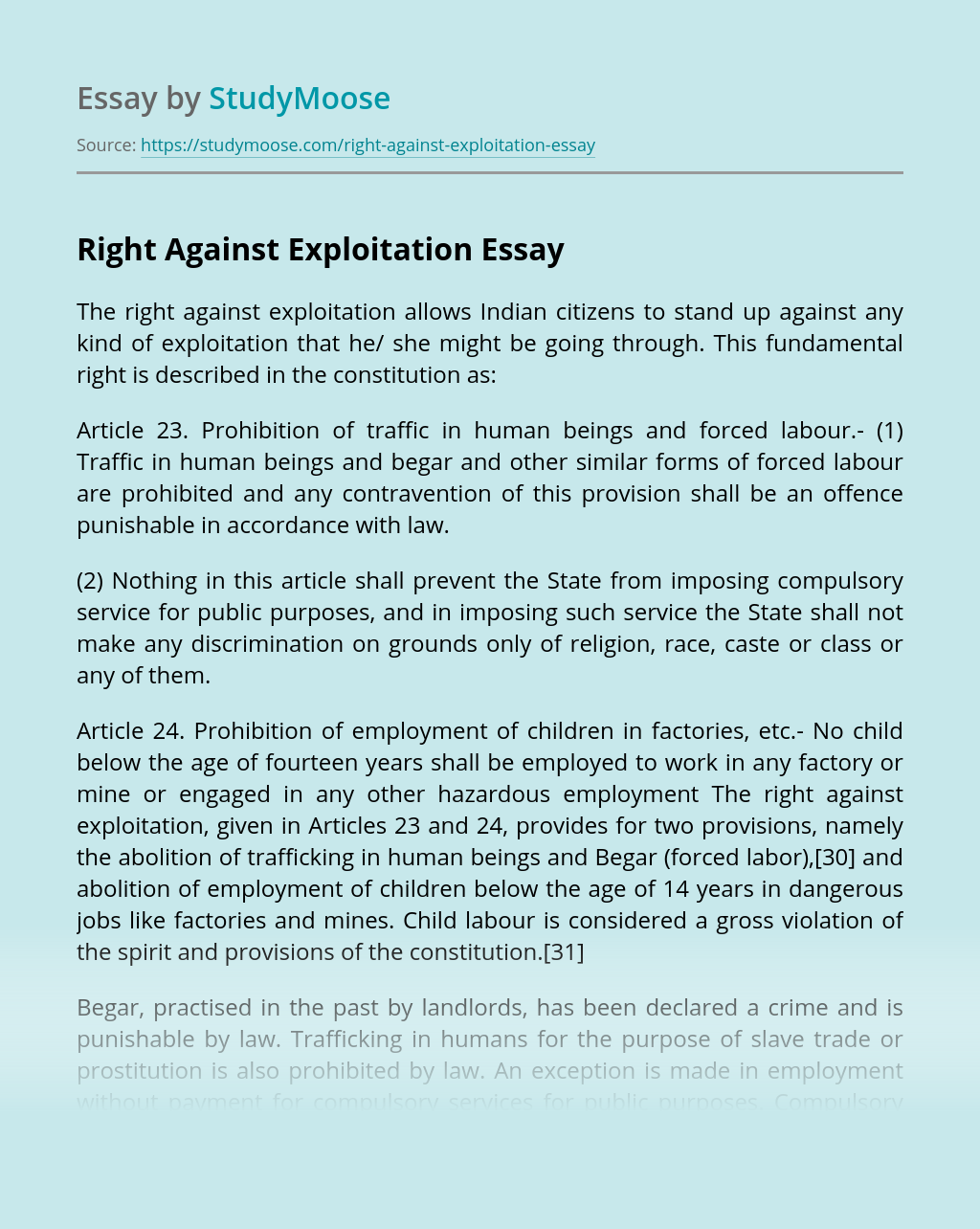 The Virginia Slave Codes date all the way to early 1600s. During the 17th century, indentured servants, who decided to work for an affirmed amount of time in replace for their means of access to the “New World”, were a handy resource of manual labor for the American colonies. Both blacks and whites served under...

'No Dialects Please' by Merle Collins

Task: Using any literary or linguistic approach with which you are familiar, write about how the impressions of the speakers are created in the poem ‘No Dialects Please’ by Merle Collins. The poem takes the form of a reply to a competition “looking for poetry of worth” but the entry requirements, to the discus of...

Get Essay
Europeans in Jamaica

When did they come? Jamaica was first colonized by a native group of South American origin who, in the early history of Jamaica, called their home a paradise of wood and water. The Arawak were there to greet Christopher Columbus when he arrived in Jamaica in 1494, beginning a long period of European colonization there....

They offer very detailed and disturbing descriptions of life on the Pine Ridge Reservation in South Dakota, the slums of Camden, New Jersey, and the “surface mining” zones surrounding Welch, West Virginia, as well as some places in Immokalee, Florida, that are literally like slave camps. One chapter of the book caught my eye, “Days...

12 Years a Slave By Steve McQueen

In this essay I will be discussing a movie directed by Steve McQueen, twelve years a slave. I will speak about McQueen’s use of visual language’ in a selection of scenes from the film and put my opinion on whether I think the movie is a true invention’ or a false invention’. Twelve years a...

And Then They Came for Us

Richard Frethorne wrote a letter about his life just three months after arriving in the colony. Richard Frethorne described about the severe hardships, he is facing in the new world, by writing to his mother and father. Frethorne’s heart-wrenching letter delivers an enlightening picture of the adversities of settlement, particularly for indentured servants. He told...

Introduction The Olinka do not believe girls should be educated. When I asked a mother why she thought this she said: “A girl is nothing to herself; only to her husband can she become something. ” “What can she become? ” I asked. “Why,” she said, “the mother of his children. ” (162) Much like...