People inside the movie business call them exploitation movies; more recently, from the perspective of the fans, they’ve taken on the moniker «psychotronic» or «cult» movies. But whatever you call them, these pictures — biker movies, slasher films, prison (especially women’s prison movies), and sleazy dramas — were for many years the unseen iceberg in Hollywood’s motion picture output.

The last great flowering of the exploitation movie took place during the early and mid 1970s: soon after the introduction of the Motion Picture Association of America (MPAA) ratings system, but before the arrival of home video, and before the film-budget ante was raised by George Lucas and Steven Spielberg (who did at least one picture, The Sugarland Express (1974), for which the audience included those action-film fans and drive-in patrons who make exploitation pay).

Don't use plagiarized sources. Get your custom essay on
“ Exploitation Movies: Bikers, Babes, And Slashers ”
Get custom paper
NEW! smart matching with writer

At the time, Hollywood was on a blockbuster kick, making fewer but bigger pictures, but there were still lots of small theaters that hadn’t a prayer of booking big-time titles like Earthquake (1974) or Midway (1976) — or which catered to audiences that didn’t want them.

There were never enough major mainstream films to fill the booking needs of the country’s theaters, especially once they started converting to duplexes and triplexes in the mid 1970s. Theaters needed titles for their screens, and major studio production was dropping.

There was still a lot of money to be made providing pictures for the bottom half of double-features and the smaller multi-screen theaters. The answer lay in exploitation movies — and, ironically enough, their marketing was aided by the MPAA ratings system, which had been intended to make it more difficult to make exploitation movies.

The MPAA ratings — G, M (later changed to GP and then to PG), R, and X — were supposed to guide filmmakers and audiences in the making and choosing of films.

To some extent, they did just that, influencing the major studios and filmmakers — with such notable exceptions as John Schlesinger’s Midnight Cowboy (1969), Stanley Kubrick’s A Clockwork Orange (1971), and Sam Peckinpah’s Straw Dogs (1971), all originally X-rated — to tone down the extremes of violence and sex, and to boast «socially redeeming significance» as a justification for any sex, profanity, and violence which did leak through.

But those same ratings, and the resulting caution imposed on the major studios and distributors also created a major problem. When Hollywood stopped making films with excesses of violence, sex, and profanity, it ignored the fact that there was still an audience out there for those kinds of pictures; those people needed more than a James Bond picture every two years, or a Robert Aldrich film every 18 months, to keep them happy.

Into this breach stepped the exploitation filmmakers. Exploitation filmmakers didn’t care about socially redeeming significance. They very honestly (or shamelessly) cared mostly about making money and knew how to do it by making fast-moving, diverting pictures that piled lots of action and sexuality onto the screen. They were happy to exploit the less-respectable sides of life, and they did so with gusto — as long as it was profitable.

Not that these pictures had much to do with The Wild One — the scripts, acting, and direction in pictures such as The Sidehackers (1969, aka Five The Hard Way), The Mini-Skirt Mob (1968), or even Hell’s Angels On Wheels (1967), were laughable, but they were also great fun, and their mixture of violence and unintended laughter kept a lot of people entertained in between the release of major Hollywood productions like The Dirty Dozen (1967) and Kelly’s Heroes (1970). Some filmmakers even tried to mix their genres, with such delightfully dubious results as Werewolves On Wheels (1971).

The other major subject that the 1960’s «B»-producers exploited to the hilt was the counter-culture itself — hippies, drugs, protests. Riot On Sunset Strip (1967), The Love-Ins (1967), and Psych-Out (1968) stand out as classics of this sub-genre. (Riot actually features music and footage of that legendary late-1960s group the Chocolate Watch Band sandwiched between its story of teen rebellion, drugs, and sex. ) The Hollywood studios and the MPAA had overlooked the audience for these pictures in trying to clean up movies — it wasn’t the most discriminating film-going audience in the world, but they sure knew how to have a good time.

Occasionally, a respected Hollywood figure might find their way into such a picture — Jane Russell, that legendary physique of the 1940s and early ’50s, appeared in the biker flick The Born Losers (1967), which had the greater significance of introducing Tom Laughlin’s Billy Jack screen hero, an American Indian martial-arts expert, years before the movie Billy Jack (1971) (a major exploitation-film success) parlayed soft leftist politics and politically correct violence into a mega-hit.

Aldo Ray found work in the American International Pictures drug exploitation title Riot On Sunset Strip. And the late John Cassavetes, in between directing his own respected serious pictures, made money by starring as a gang leader in the ’60s motorcycle «B»-flick The Devil’s Angels (1967). The best exploitation films of that late-1960s/early-1970s period — or any period — aren’t polite and aren’t concerned with questions of taste.

They’re «in your face,» full of cussin’ and swearin’, blood and guts, T&A, monsters, car crashes, psychopaths, nymphomaniacs… and while mainstream Hollywood pictures have featured a lot of these same traits lately, they were once the exclusive domain of the «B»-pictures. While biker flicks began to wane during the early 1970s, blaxploitation and martial-arts films came along to fill the void. The majors dabbled in both, but the grungiest, most authentic examples came from the independent producers or were cheap imports, like the ’60s spaghetti westerns.

Check out Rudy Ray Moore in Dolemite (1975), or Sonny Chiba in The Streetfighter (1975) — why bother getting dirty if you’re not going to go all the way? Other notable films of this period include Bob Clark’s Deathdream (1972), Martin Scorsese’s Boxcar Bertha (1972), and Paul Bartel’s Death Race 2000 (1975), which embodies everything great about these movies. The latter two were produced by Roger Corman, who was responsible for a number of significant «B»-pictures as a producer and director in the 1950s and ’60s and has continued to produce and distribute such films through his Concorde Pictures in the 1980s and ’90s.

For still more cheap thrills, try the infamous trio of ’70s horror/gore films: Wes Craven’s Last House On The Left (1972, a remake of Ingmar Bergman’s 1959 The Virgin Spring) and The Hills Have Eyes (1977), and Tobe Hooper’s The Texas Chainsaw Massacre (1974), and remember that years before he made The Silence Of The Lambs (1991), perhaps the most «respectable» exploitation film ever, Jonathan Demme worked for Corman, directing drive-in favorites like Caged Heat (1974) and Crazy Mama (1975).

Although many of these films are enjoyable for all the «wrong» reasons (technical ineptness, bad acting), sometimes everything gels and you’ve got a wonderful rough diamond. The best results often occur when the production values are so unobtrusive and the performers are so natural (and unknown) that the film takes on a documentary quality. This is especially unnerving when you’re looking at a sick cheesefest like S. F. Brownrigg’s Don’t Look In The Basement (1973) — the entire experience evokes a weird, unsettling dream.

While the most fondly recalled exploitation films are usually horror, softcore, or actioners, we shouldn’t ignore those truly lame offerings such as The Adventures Of The Wilderness Family (1975) or In Search Of Noah’s Ark (1976) or practically any Sunn Classics release. Most of these «family-oriented» offerings were four-walled into theaters — that is, booked in for a flat fee, in conjunction with a massive advertising campaign — and were designed mainly to part kids from their allowance money. By the early 1980’s, the exploitation film’s theatrical hopes were dwindling.

Blockbuster mentality had a grip on Hollywood as never before — Star Wars (1977) and Jaws (1975), both of which owed something to the «B»-movies of yore, became the standard for success, pushing the bottom line higher and higher. Exhibitors and studios saw how much money they could really make and became very wary of films that couldn’t guarantee mega-bucks. Modern multiplexes sprang up alongside shopping malls, and subsequently a lot of people abandoned their aging neighborhood theaters and drive-ins.

Movie-production costs were rising past the point that many smaller independents could afford, and distributing «B»-pictures became less and less lucrative. The last major exploitation genre of the theatrical era was the slasher film, but the in-bred limitations of the «slice-and-dice» genre prevented much creativity (although Paramount managed to squeeze profits from the Friday The 13th films for a few years, and at least the first A Nightmare On Elm Street (1984) wasn’t a complete joke).

The home-video explosion of the ’80s saved exploitation in a big way. Though theatrically there were a few bright spots, like Sam Raimi’s The Evil Dead (1983), many «B»s went straight to video (and continue to do so). Nowadays there are stalwarts making exploitation films with practically no hope of theatrical release but with a virtual guarantee of a video shelf-life, as well as years on cable television. (USA Network’s Night Tracks has long been a prime venue for these films, although they are occasionally shown in censored versions).

Notable auteurs include Fred Olen Ray (Hollywood Chainsaw Hookers, 1988), Stuart Gordon (especially the original cut of The Re-Animator, 1985), Andy Sidaris (Hard Ticket To Hawaii, 1987; The Picasso Trigger, 1989), Larry Cohen (Q, 1982; The Stuff, 1986) and Frank Henenlotter (Basket Case, 1982; Frankenhooker, 1990). Some actors and actresses have carved their niches by appearing in «B»-flicks almost exclusively and have gained a loyal following by doing so: Check out nearly anything with Eddie Deezen, Wings Hauser, Linnea Quigley, Brinke Stevens or Monique Gabrielle, and you’ll get the idea. 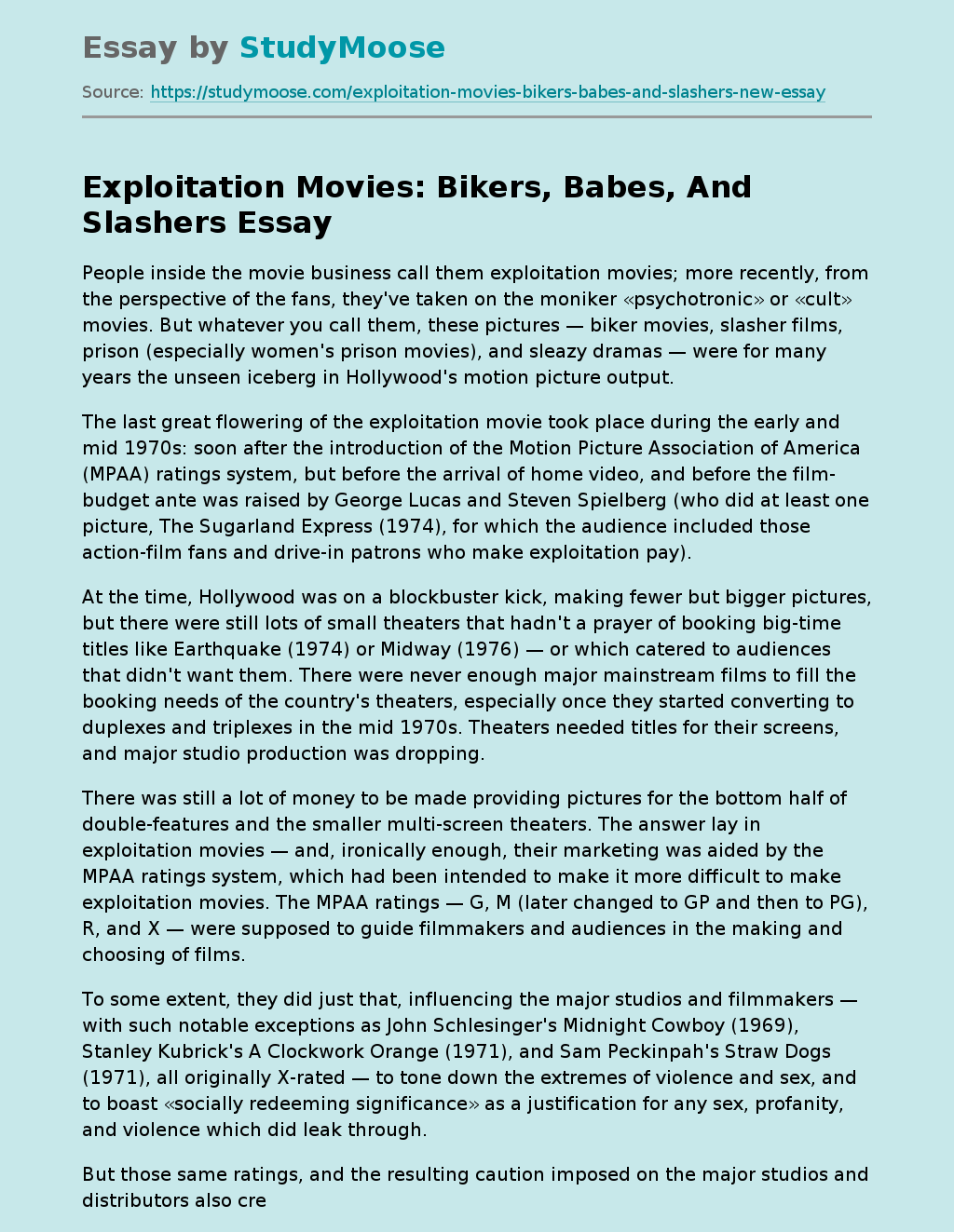