Given the fact that Milgram’s experiment (Universitsy of Rhode Island, undated) has caused so much controversy, both in its methodology and its results, the conduct of certain psychological experiments has been put on the spotlight and scrutinized.  Milgram’s experiment and other similar studies would definitely be prohibited from being conducted in today’s more stringent ethical standards and policies (Rupert, 2008), but was “allowable” at that time.

In view of the potentially damaging psychological trauma that this kind of experiment could inflict on its participants, I believe that it should be prohibited, especially noting the fact of its long-term negative effects for the subjects.

Don't use plagiarized sources. Get your custom essay on
“ Reflection on Milgram’s Experiment ”
Get custom paper
NEW! smart matching with writer

Inducing this kind of stress is unacceptable and could be construed as definitely going “overboard”.  The use of “virtual” subjects (in lieu of the human “students” in Milgram’s study) could be used instead , as well as employing other experimental designs (Slater et al, 2006).

However, we have to admit that the deception was indeed necessary, in order to achieve the objectives of the said experiment; there simply was no other way.

And the knowledge gained from the results, is undoubtedly foremost in the history of psychology and social psychology, so much so that it is still being replicated up to this day and remains to be controversial.  It also answered questions about the validity of the claims made during the Eichmann Trials (Eichmann was a high ranking official of the Nazi Party, was on trial for war crimes and crimes against humanity), which posited that Eichmann and his accomplices were merely “following orders” during the Holocaust (Rupert, 2008).

Thus, in this case, the significance of the knowledge gained in the process of this experimentation could be seen as “outweighing” the “price” paid for psychological stress suffered by the participants.  To answer the problem posed by the stress involved, the debriefing session for the subjects concerned should not be conducted for one time only, rather, a series of sessions should be conducted even long after the experiments are done, to make sure that these people are able to go back to normalcy again.

I agree with Baumrind that the participants’ welfare was indeed compromised and that they were forever changed as a result of Milgram’s experiment.  On the other hand, I would have to go with Milgram in stating that the use of deception was crucial and necessary in achieving what the experiment wanted to accomplish in the first place.  And as earlier stated, the stress suffered by the participants were, to me, far “outweighed” by the value of the results of the said experiment.  So in this case, you could say that the act of deception was a “necessary evil”.

Again, the conduct of debriefing sessions is the key to addressing the problems brought about by the psychological stress given to the participants, not only for one time, but for a number of times after the study.  The effectiveness of these meetings could only be ensured by conducting monitoring and evaluation activities on the experiment’s impact on the participants even long after the study has ended.

Lastly, on the issue of accountability, I would also have to go with Milgram again with her defense that he could not be held accountable for something that he couldn’t have anticipated.  It is easy for us to pass judgement about the effects of the experiment now, at an age where ethical standards are relatively higher and more explicit.  It is likewise easier for us now to anticipate the amount of stress that this activity would have on the participants, but back then, it may have not been the case.  Therefore, I believe that it is valid not to hold Milgram accountable to the participants’ post-experiment conditions in view of his alleged “ignorance”. 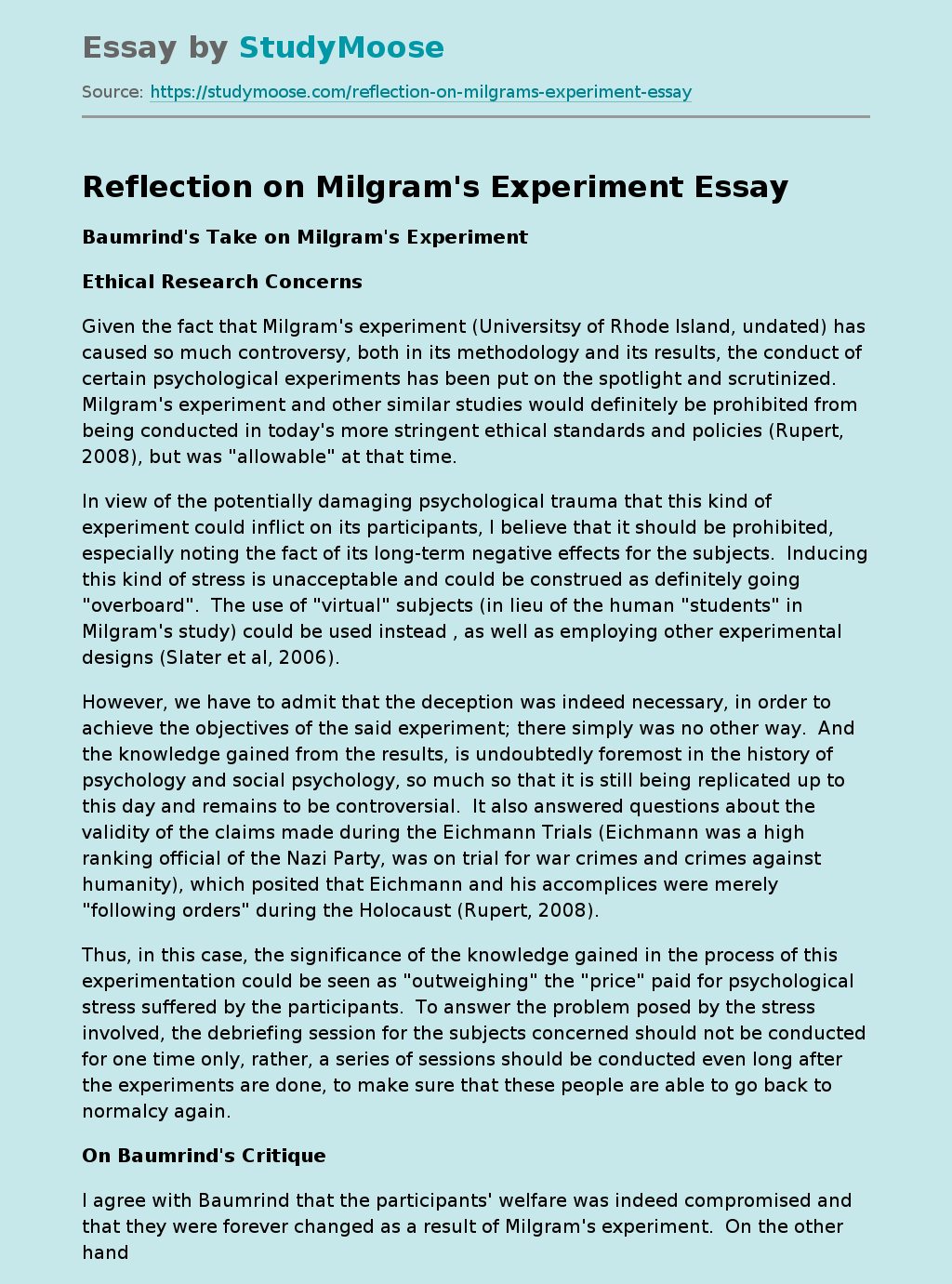