In order to purify our products, we will have to add water to our crystals so that the acetylsalicylic acid can be dissociated from impurities. Using a technique called vacuum filtration, crystals will be held on a filtration paper while the liquid portion of reagents will drained into an Erlenmeyer flask.

To purify our crystals even more, we will have to perform a procedure called re-crystallization, using ethyl acetate as our solvent instead of water in order to prevent decomposition of our products, and then once again we will use vacuum filtration to separate the crystals from the solvent.

After we have finished with the experiment, we will be testing for the presence of salicylic acids in our crystals. Salicylic acid is a phenol and it will react with a mixture of Ferric Chloride by changing the color of the solution into a dark purple. If our crystals change color, it will mean that we still have some impurities and the melting point of the acetylsalicylic acid may be affected by the presence of these impurities.

Through our calculations we were able to determine salicylic acid as our limiting reagent, which means that the amount of acetylsalicylic acid produced will be determined by the amount of salicylic acid available. Through this experiment, we were able to learn procedures such as esterification, which involves the production of aspirin, as well as techniques such as crystallization and re-crystallization that can help us achieve a pure end product. Impurities, as we were able to observe, play a significant role in this experiment because they affect the quality of our results. The more impurities present in our end product then, the lower the melting points of the crystals might be, and the possibility of a positive ferric chloride test may be higher. Overall, the percentage yield for this reaction was 60 % which could have been due to errors in the process of crystallization, re-crystallization or due to insufficient time needed to dry the compound after re-crystallization.

Preparation and Crystallization of Acetylsalicylic Acid

In a 125 mL Erlenmeyer flask add salicylic acid (2 g, 0.0145 mol), acetic anhydride (5 mL, 0.053) and 5 drops of sulfuric acid. Swirl mixture until fully dissolved, and proceed to heat flask in a water bath at 50° C for 10 minutes. Allow the mixture to cool down at room temperature and then place the solution on an ice bath until the formation of crystals cease, if no crystals are formed scratch the side walls of the flask with a glass rod. Proceed to add 50 mL of distilled water into the solution and observe the further process of crystallization. At this point you should see crystals in the mixture. Then, set up the filtration apparatus, which should include a flask, Buchner funnel, filter adapter, filtration paper and a rubber hose that will connect the flask to the vacuum device. Test the filtration device with water, before placing the crystals in the solution. Filter the crystalinization product for 5-10 min and finally rinse the crystals with some distilled water.

Dissolve crude product of previous crystalinization in a clean 125 mL Erlenmeyer flask with ethyl acetate (2-3 mL). Gently heat the solution on a hot plate to dissolve the reagents and then allow the solution to cool down at room temperature. At this point crystals should form, if not add petroleum ether to the solution. Place the flask with the solution on an ice bath until crystallization is complete. Once again, set up the vacuum filtration that was used to collect crude crystal product and vacuum dry the crystals for 10 minutes. Perform the ferric chloride test by setting up four test tubes with salicylic acid, products of crystalinization, products of re-crystalinization and distilled water respectively in order to detect the presence of phenol. Finally, after placing the products of re-crystalinization in the oven for 5-10 min record its mass and its melting point.

Our results lead us to think that the possible reason for this low percentage, as well as for the differences between melting point range obtained and the actual melting point (128- 130 ° C 0 ° C instead of 135- 136 ° C) might have been due errors in the time that the re-crystallized sample spent in the oven. This theory is reinforced by the fact that within the ferric chloride test the sample tested negative for phenol, meaning that there was no salicylic acid was present.

It would have taken the reaction much longer to reach the activation energy, and the reaction would have not occurred as fast as it did. 3. If you used 5.0 g of sulfuric acid and excess acetic anhydride in the preceding synthesis of Aspirin, what would be the theoretical yield of acetyl salicylic acid in moles? In grams?

What is the equation for the decomposition reaction that can occur with aspirin?
Water + acetylsalicylic acid acetic acid + salicylic acid

Most aspirin tablets contain 5 grains of acetylsalicylic acid. How many milligrams is this? Since one grain = 65 mg, then an aspirin tablet will contain 65 mg * 5 =324 mg 6. A student performed the reaction in this experiment using a water bath at 90°C instead of 50°C. The final product was tested for the presence of phenols with ferric chloride. This test was negative. (no color was observed); however, the melting point of the dry product was 122-125°C. Explain these results as completely as possible.

The process of crystallization was studied by G. L. Perlovich and A. Bauer-Brandl in comparison to crystal growth of Acetylsalicylic Acid. The present work postulates an analogy to melting processes, looking at melting as nucleation. It is hypothesized that the melting process can be described similarly to crystallization assuming that nucleation of the liquid phase is followed by growth of the liquid phase in two or three dimensions respectively. By applying correlation analysis experimental data was obtained, explained by the layer structure of crystals of Acetylsalicylic Acid. By intergrading the DSC curves the fraction of material molten was calculated. This articled gave us some background information to better understand the results of this experiment and the reactions that occurred trough the experiment process. 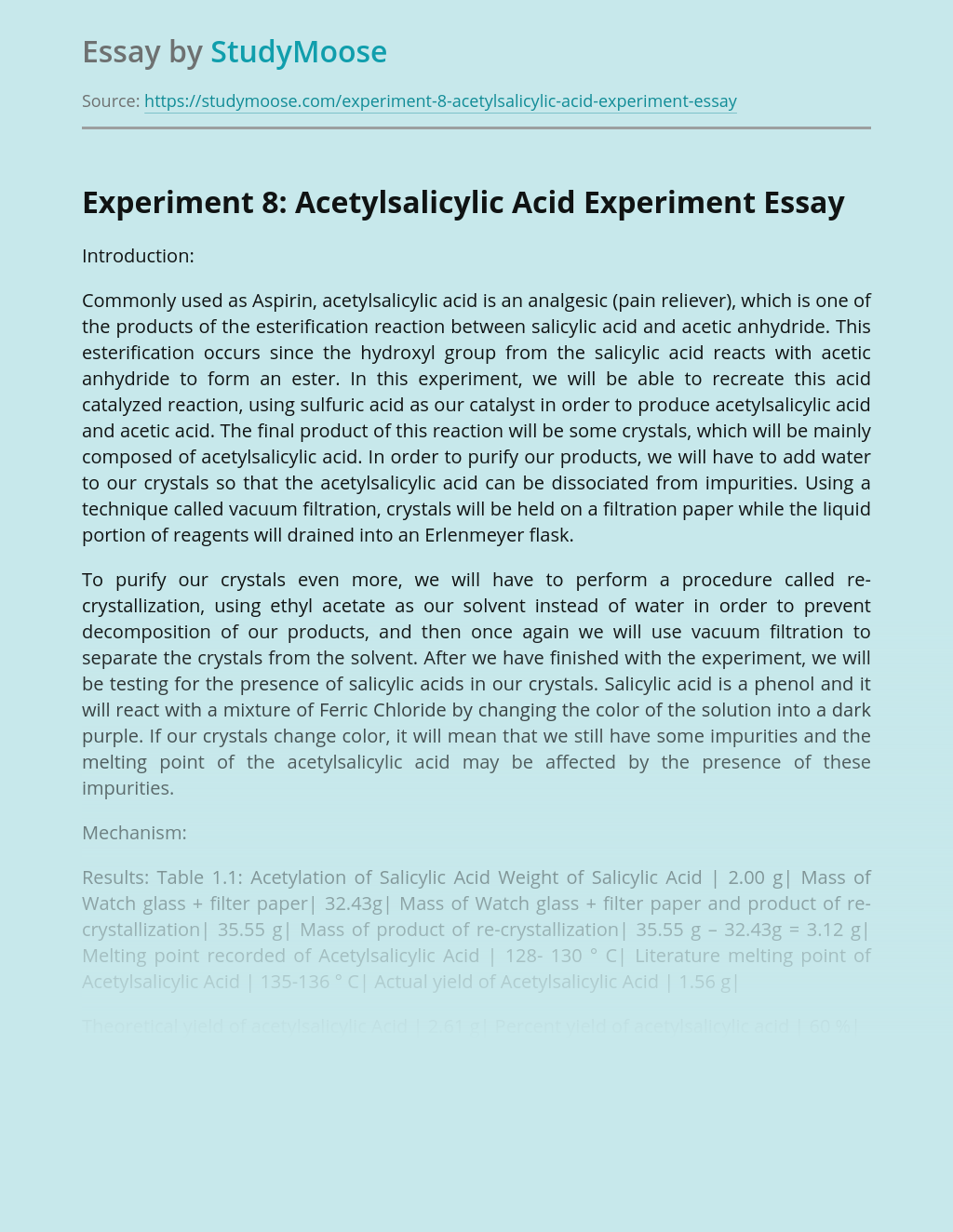